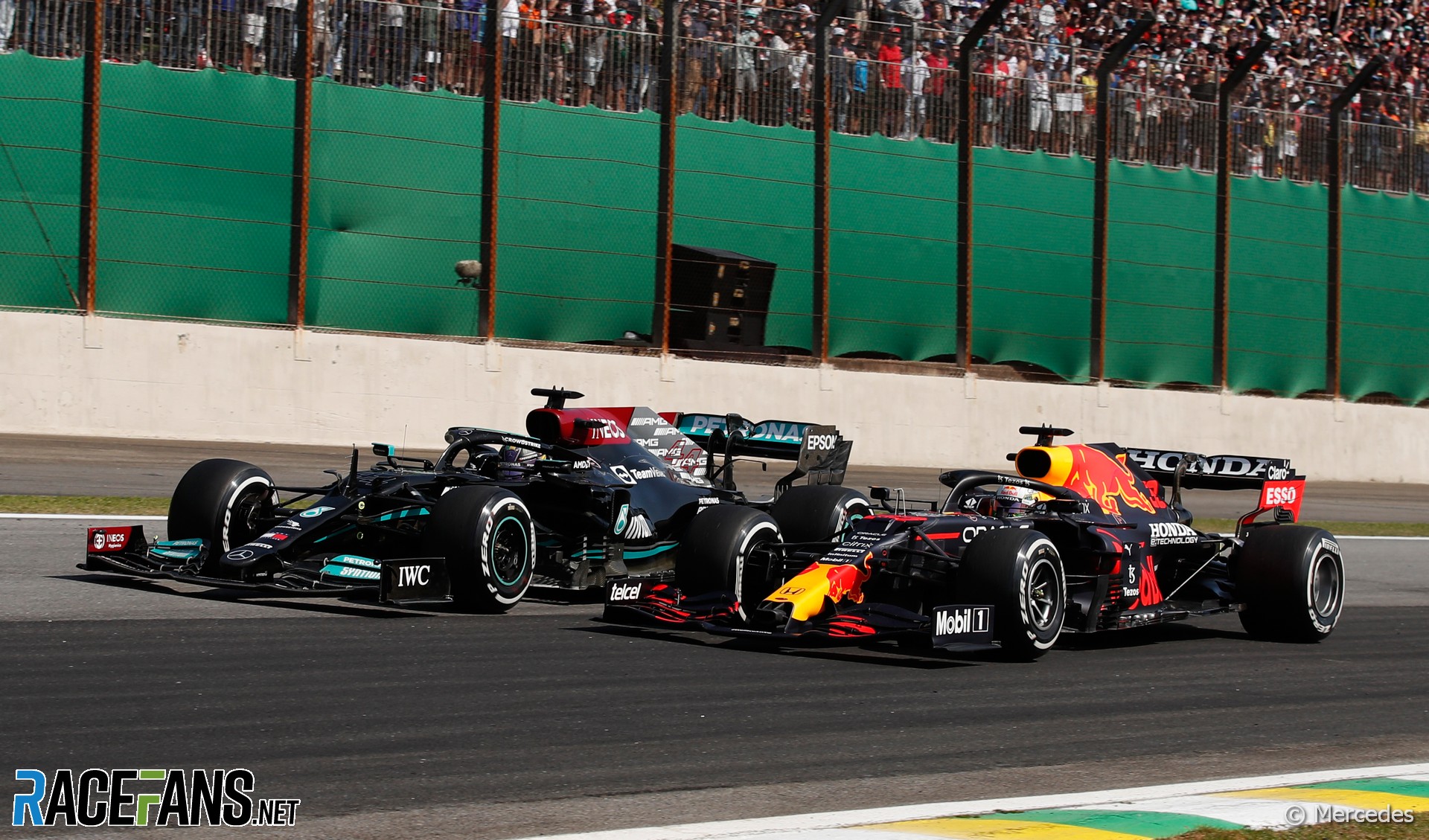 Max Verstappen’s lap 48 lunge down the inside of championship rival Lewis Hamilton at Interlagos was a defining moment in the turning championship contest between the pair.

With Hamilton’s Mercedes increasingly difficult to resist in a straight line, Verstappen has pushed the limit of the regulations ever further in his efforts to keep his rival behind. He wielded a controversial new technique in Brazil which worked on that occasion, but did not when he repeated it in Jeddah.

Verstappen had lost the lead of the race to Hamilton when they shot towards Descida do Lago on the 48th lap of the race. The Mercedes had pulled fully ahead on his outside as they approached the left-hander.

The Red Bull driver retaliated by leaving his braking impossibly late, skating well wide of the corner. Hamilton, who at least partly saw this coming, was able to avoid hitting the Red Bull, but ran wide with him.

It was revealing that the stewards’ decision to let Verstappen’s move stand – indeed, they didn’t even investigate it – prompted consternation even among rivals with no stake in the title fight. The likes of Lando Norris and Carlos Sainz Jnr pointed out how similar past moves had attracted penalties, not been met with a ‘play on’.

Verstappen therefore had every reason to attempt exactly the same move the next time Hamilton attacked him in a similar fashion, which was on lap 37 at Jeddah. The corner configurations were different – Jeddah a left-right chicane compared to the double-left at Descida do Lago – but Verstappen’s technique was comparable.

He was therefore dismayed to be told later in the lap to relinquish his lead to Hamilton. As was the case with the conversation between FIA F1 race director Michael Masi and Red Bull’s sporting director Jonathan Wheatley during an earlier stoppage, this was likely a matter of the team being advised to do so, on the understanding the incident would otherwise be investigated. Following a botched attempt to hand the position back to Hamilton. Verstappen was duly penalised.

Verstappen immediately questioned the apparent inconsistency in the handling of the two incidents after the race. “He had the run, a bit like Brazil, and of course I braked late and I think I got a little bit off-line at one point and I had a moment, so I went wide.

“But he also didn’t make the corner so we both basically missed the corner and I don’t think it’s fair to then just say that I get a penalty.”

Having not had the chance to study Hamilton’s perspective of the incident when he made those remarks, Verstappen wouldn’t have seen the key difference in his rival’s response to the attack which likely explains why the outcomes weren’t the same.

In Brazil at a higher-speed corner, Hamilton ran wide with Verstappen, maintained his momentum, and ensured he lost as little ground as possible to his rival. In Jeddah, at a slower corner, his reaction to being forced wide by Verstappen was the exact opposite.

Instead of following his rival through the run-off, minimising his time loss again, Hamilton reduced his speed further and turned sharply to rejoin the track as swiftly as he could. Doing so ensured he made the apex for the following corner, which Verstappen didn’t get anywhere near. Hamilton therefore made it inescapably obvious how much time Verstappen’s lunge had cost him.

Could Hamilton have done the same in Jeddah? Verstappen’s team principal suggested so, drawing a comparison to the first-lap sparring between Sergio Perez and Valtteri Bottas: “If Lewis would have been smart he would have gone for the cut back like Checo did on Valtteri.”

Brazil and Jeddah were punch and counter-punch between the title contenders: Verstappen devised a new tactic which Hamilton figured out a response to. With areas of the rule book which once seemed certain now apparently vague, their combat methods are evolving from race to race.

With Verstappen lining up on pole position for today’s finale on soft tyres and Hamilton immediately behind on more durable mediums, it’s not hard to imagine the same circumstances we saw in Jeddah may repeat today. However for the last race of the season there is another dimension in play.

On Thursday before this weekend’s race Masi reminded everyone involved that the stewards retain their power to confiscate points for behaviour “contrary to sporting ethics”. Previously Verstappen could bank on Hamilton backing out of a collision as his rival needed to score more points to reduce his lead.

But with the title hanging in the balance this weekend, the stewards aren’t about to penalise either driver with a grid penalty for next year’s Bahrain Grand Prix if they take the other guy out, for obvious reasons. That may embolden Hamilton to be more robust with a driver who has tested his resolve sorely in the races leading up to their decisive contest.

19 comments on “How Hamilton beat Verstappen’s ‘Interlagos lunge’ in Jeddah, and what it means for the finale”