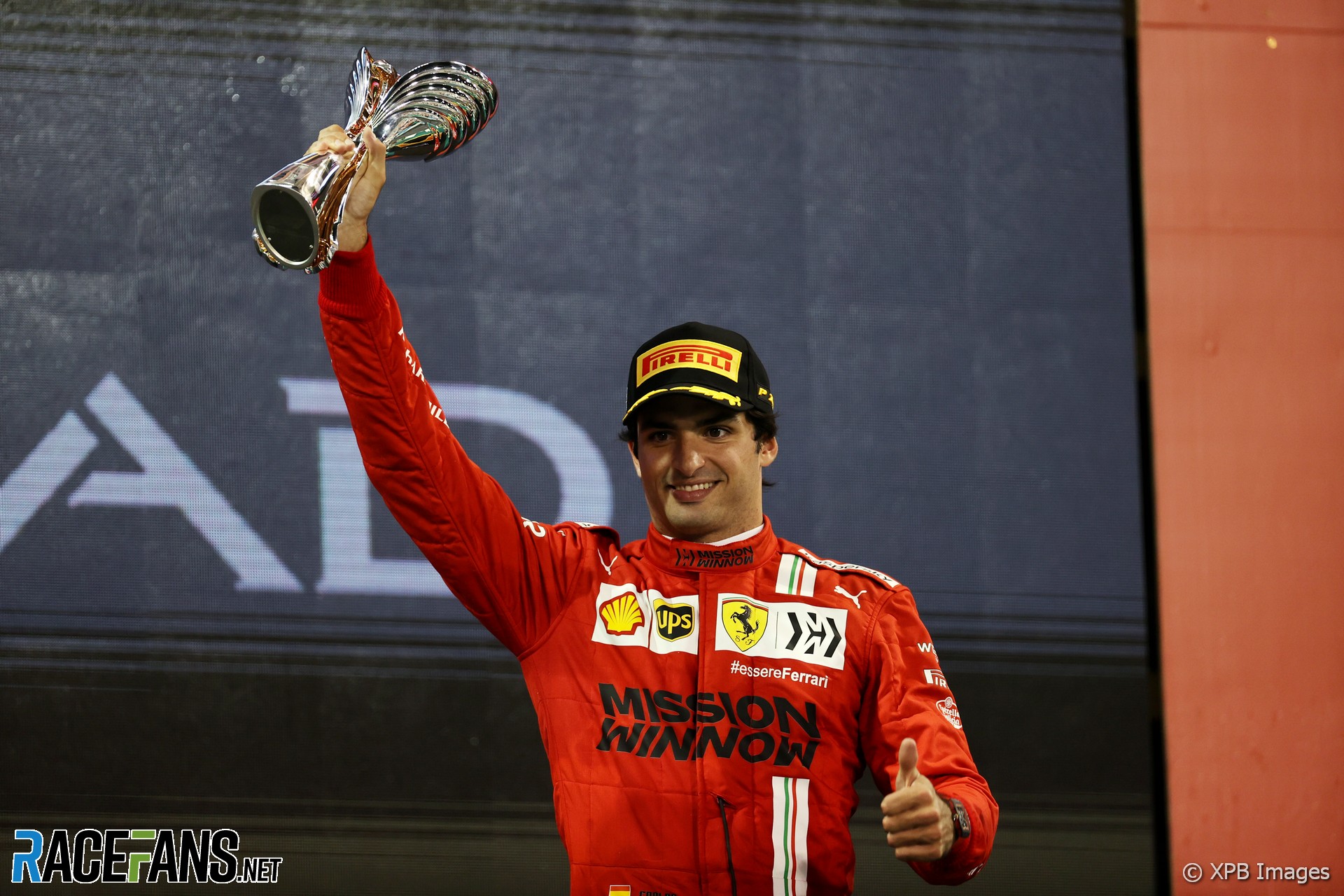 In the round-up: Mattia Binotto praised Carlos Sainz Jnr’s first season with Ferrari, saying the team got what they wanted from bringing him onboard for 2021.

Ferrari team principal Mattia Binotto says he believes Carlos Sainz Jnr has given the team exactly what they were looking for in their driver line up in 2021.

Sainz finished fifth in the championship, ahead of Lando Norris and team mate Charles Leclerc, in his first season with Ferrari. Binotto says he is impressed with how Sainz improved throughout the year.

“When we signed with Carlos, the objective was to have two good drivers that were good racers, consistent and capable of scoring points for the team and this is what we got this season,” Binotto said.

“Being his very first season with Ferrari, it was not straightforward and obvious. But I think we signed with him because we said, ‘he is a good racer, consistent, capable of scoring points’, but I think he is as well a good learner, because he has proved that so much during the season, he has improved. And somehow I think the end of the season was his best part of this entire season itself.”

Pierre Gasly says he is “really sad” that Antonio Giovinazzi will not be on the F1 grid in 2021.

Answering questions from fans in a video posted on the team’s YouTube page, Gasly said there were three drivers on the grid he had particularly good relationships with.

“Charles clearly is my best friend in the paddock,” he began. “Yuki [Tsunoda] – after this season, you know, spending a lot of time together, I do have a very good relationship with him.

“Antonio Giovinazzi, I’m actually really sad to see him leaving the paddock because he’s a very good guy and just a very nice person. I get on pretty much with everyone, but I would say these three are obviously the closest.”

Aston Martin test and simulator driver, Nick Yelloly, says he feels positive about the team’s car for next year, based on how it feels in the simulator.

Yelloly has completed over 50 days of simulator running for the team during the 2021 season and completed 118 laps in last week’s Young Drivers Test in Abu Dhabi.

“We covered off set-up options, some aspects of next year’s car and some specific direction in setup, so I could get a feeling on how they compared to running in the simulator,” Yelloly said.

“We have been working on the 2022 car for a long time with our first running in the sim back in March. Obviously, when we get the new car on the track, that will be the main point, but in general, the car feels very, very good and we test each new idea out on the simulator before even thinking about any build process. We have made big gains since March and now we look forward to the February running in Barcelona.”

RaceFans Supporters can claim a discount of up to 25% on the new edition of the
motor racing annual Autocourse 2021-22.

Existing RaceFans Supporters are being sent their discount codes this week.

If you are not a RaceFans Supporter but would like to take advantage of the
offer you can find out more and sign up here:

So I thought I’d give an explanation as to why I’ve been quiet on social media.
I’ve written this message to bring you up to speed with the challenges I’ve faced these past two years in America.

I hope you all have a lovely Christmas! 🎄#MentalHealth #Family #StaySmiling pic.twitter.com/aX3mJf6kZT

Simulator racing at Maranello with the F2007 at Mugello pic.twitter.com/rEWUKG0zxe

"Unfortunately for Londoño, he didn’t quite have the talent required to run with the F1 pack, and was denied the required accreditation by the FIA prior to an event in Brazil. This was partly due to slamming his car into the back of one driven by Keke Rosberg during a practice session, and partly as a result of bigwig Bernie Ecclestone flipping out about Cuchilla’s cartel links."

"Coming into F2 from F3, everything is a lot heavier. The steering requires more effort, and I said to the team that I didn't even notice it. I think that is a really positive sign, and that’s because of the work I’ve been doing on my upper body strength and on my neck."

"Yutaka Suzuki, the general manager, Super GT team director, and chief engineer of GT500 vehicle development for NISMO (Nissan Motorsports International), died Sunday at the age of 56 after battling an undisclosed illness throughout this year."

The news that Audi are actively pursuing an entry into Formula 1 for 2026 has excited many, but ChrisVB is puzzled by what the marque stands to gain from joining the world championship.

To be honest I really don’t understand why Audi would join F1.

It costs a lot of money that Audi should be spending on EV transformation. For example by 2026, all new company cars in Belgium (more than half of new cars!) have to be zero emission. I know Belgium is small, but it is a trend and other countries are even further.

And what is there to gain? Knowing how to make better ICE engine? Not really usable or too expensive for road-going cars apparently since it is already seven years since the new engines are there. Non-F1 manufacturers seem to be making more plugin hybrids than Honda, Renault or Mercedes. So participating in F1 doesn’t seem to give an edge.

Learning how to use carbon zero fuels? I seriously doubt this is the future for new cars (maybe for old-timers). It will be way more expensive than EV’s for total cost of ownership. And F1 participation is not needed for that.

So marketing? Seems very expensive and would be a better fit for Porsche.
ChrisVB