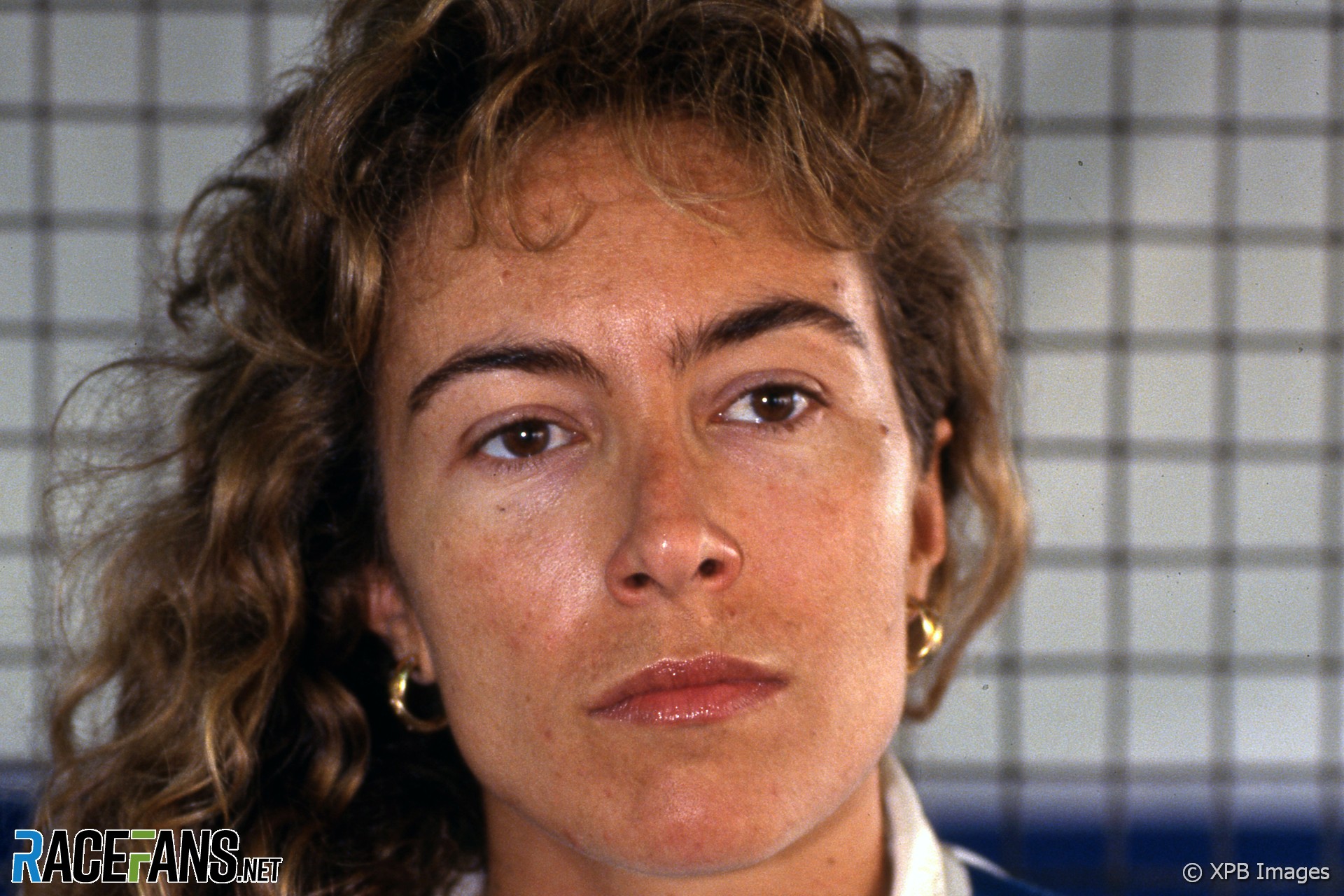 Three full decades have now passed since the last occasion a female racing driver was hired to race for a Formula 1 team.

But Giovanna Amati’s time at Brabham proved brief, and never saw her start a race. She was widely considered to have been promoted beyond a level she was prepared for. She also had the misfortune to arrive at a team which was on its last legs, and would collapse just four months after Amati’s final appearance for them.

Having taken Nelson Piquet to the drivers championship in 1983, Brabham’s descent was startlingly swift. Just five years later it disappeared from the grid – owner Bernie Ecclestone having steadily lost interest in a team which had won just three races in the interim, and increasingly preoccupied with building his F1 empire.

He sold the team to Joachim Luthi, who returned it to F1 in 1989, but was subsequently arrested on fraud charges. Nonetheless, Brabham’s season did have its bright spots – particularly at slower tracks which favoured its Pirelli tyres over the Goodyears used by quicker rivals. This helped Stefano Modena to a podium finish at that year’s Monaco Grand Prix.

The team was sold to Formula 3000 team Middlebridge on the eve of the 1990 season, and its future looked brighter after it secured a three-year deal to run Yamaha’s V12 engines beginning the following year. However, due to the global economic climate at the time, a string of F1 teams went to the wall, and Brabham was not to be spared.

As its financial problems worsened in 1991, designer Sergio Rinland left planned innovations – such as a semi-automatic gearbox and ride height controller – on the drawing board. But this was the least of the team’s troubles.

“On two occasions during the year in 1991 I sat in the Brabham factory waiting for my cheque to be reissued because my salary cheque bounced,” recalled Mark Blundell, one of the team’s drivers that year, in an interview for RaceFans. The rest of the team were also kept waiting for their pay cheques.

The team had already compromised the rigidity of its BT60Y chassis while rectifying a design error, Blundell explained. He and team mate Martin Brundle also suffered a spate of alarming suspension breakages, prompting speculation that important suspension parts were not being refreshed as often as they needed to be in order to save money.

The team turned to Yamaha to help find Japanese sponsors, with some success, but the manufacturer was not impressed with the situation and cut short their deal, agreeing terms with the impressive new Jordan team for 1992. In September Brabham agreed a deal to run Judd engines as a customer. That meant paying drivers would be needed.

Brundle was already on his way to Benetton and Blundell was shown the door too. Brabham announced that Eric van de Poele – who had spent 1991 largely failing to coax his Modena onto the grid – would take one of their seats, bringing sponsorship from LeasePlan.

His team mate was to be Akihiko Nakaya, the 1988 Japanese Formula 3 champion who had recently taken his first win in the country’s Formula 3000 series, and brought a reported $8 million in sponsorship. But that plan hit a snag as the weeks to the 1992 season ticked down.

Unfortunately for Brabham and Nakaya, the FIA rejected Nakaya’s application for a superlicence less than a month before the season was due to start, ruling he lacked the necessary experience to drive in grands prix. In desperate need of a driver, Brabham found one who the FIA judged did have suitable experience – and who the team swiftly realised would bring them plenty of useful publicity.

As a teenager, Giovanna Amati had gone to the Vallelunga circuit near her home town of Rome to watch Elio de Angelis (who, in a tragic coincidence, died testing a Brabham in 1986). Following his encouragement, Amati enlisted in the track’s Henry Morrogh racing drivers school and began a career single-seater racing, entering Formula Abarth and the Italian F3 series. Despite only collecting a handful of points in the latter over three years, she made the step up to F3000 in 1987.

Here too the pickings were slim, though by 1991 she had become a regular qualifier and mustered a best finish of seventh. Her results may not have shown the promise of Nakaya’s, but the FIA rubber-stamped her superlicence and Brabham had their woman. On this day, February 5th, 30 years ago, she signed the deal with Brabham director Dennis Nursey.

Amati achieved her goal of reaching F1 against massive odds. No team had entered a woman for a round of the world championship since Desire Wilson was given a customer Williams to drive at the 1980 British Grand Prix.

It also marked the accomplishment of a goal she had pursued for over a decade, since a dark chapter of her life in the late seventies. Amati came from a family which owned a lucrative chain of cinemas in Rome, and in 1978 it was targeted by kidnappers.

After being bundled into a van outside the family home, Amati was held captive for 74 days until a ransom of 800 million Lire – just over half a million pounds at the time – was paid. She later rubbished various lurid claims which were made in contemporary reports, including that the then-18-year-old had fallen in love with her captor.

Amati’s Formula 1 debut, aided by a reported $3 million in sponsorship, thrust her back into the public spotlight. At the season-opening round in South Africa the only drivers who commanded greater interest from the media were Ayrton Senna, recently crowned champion for a third time, and Nigel Mansell, whose pre-season form indicated the title was finally within his grasp. For Amati, the attention became increasingly unwelcome, however, from photographers demanding she smile for their cameras, and from journalists asking what sort of career motor racing was for a woman.

Brabham’s shortage of funds meant no pre-season testing had been possible. Amati’s only F1 experience was a brief run in a Benetton a few years earlier. While the others headed out to learn the remodelled Kyalami circuit on Thursday, Amati was also getting to grips with her Brabham for the first time.

The car’s shortcomings had not been improved by its conversion to accept a Judd engine, nor by a required switch to Goodyear rubber following Pirelli’s departure from F1. A loss of fuel pressure forced her into the spare car on Saturday. Many drivers spun on the slippery surface throughout the build-up to the race, and Amati contributed several spins of her own.

It was therefore to no-one’s surprise that Amati failed to qualify, and by a wide margin – almost four seconds. To some considerable surprise, Van de Poele did make the cut, by a mere nine-hundredths of a second, thanks to the misfortune of Modena whose Jordan-Yamaha encountered technical problems.

It would be the only race he started for Brabham, despite having prior knowledge of the upcoming tracks, something his team mate lacked. In Mexico both Brabhams failed to qualify, for the first time in the team’s 31-year history. Amati again missed the cut by four seconds and was 2.9s off Van de Poele.

Amati suffered a litany of woes in Brazil including a water leak, loss of oil pressure, cracked exhaust and gearshift problems. The upshot was she failed to qualify by almost six seconds; Van de Poele was out again too.

Meanwhile, Brabham’s financial situation was growing ever more precarious. As a required payment from Amati failed to materialise, the team’s owners Alolique (previously known as Middlebridge) chose to replace her with Damon Hill, who had raced for them in F3000.

But the Brabham story did not have much further to run. En route to the Circuit de Catalunya its transporters were halted at Le Perthus on the border between France and Spain, and not released until the team had left one of its spare cars behind as security against an outstanding loan.

Though Van de Poele never got the car on the grid again, Hill did, at Silverstone and the Hungaroring. He was the team’s sole entrant at the latter, and it marked the final appearance for a Brabham in a grand prix, following which the team finally fell into receivership.

Amati went on to race in sportscars in various series throughout the nineties. However, she is invariably known first to motorsport fans as the last woman to have tackled a grand prix weekend as a competitor. And while it’s hard to refute the claim she wasn’t up to scratch, she neither had the preparation or the equipment necessary to make a decent attempt at her three-race opportunity.

The points-based FIA superlicence system of today is not without its faults and arguably remains weighted too far in favour of European series. But it does ensure newcomers to F1 have a greater level of experience than Amati did.

In recent years, W Series and the FIA’s Girls on Track programme have emerged to give young female racers much-needed promotion. The next woman to reach F1 should therefore have a better chance of success than Amati did, and will hopefully do so before the 40th anniversary of her debut.