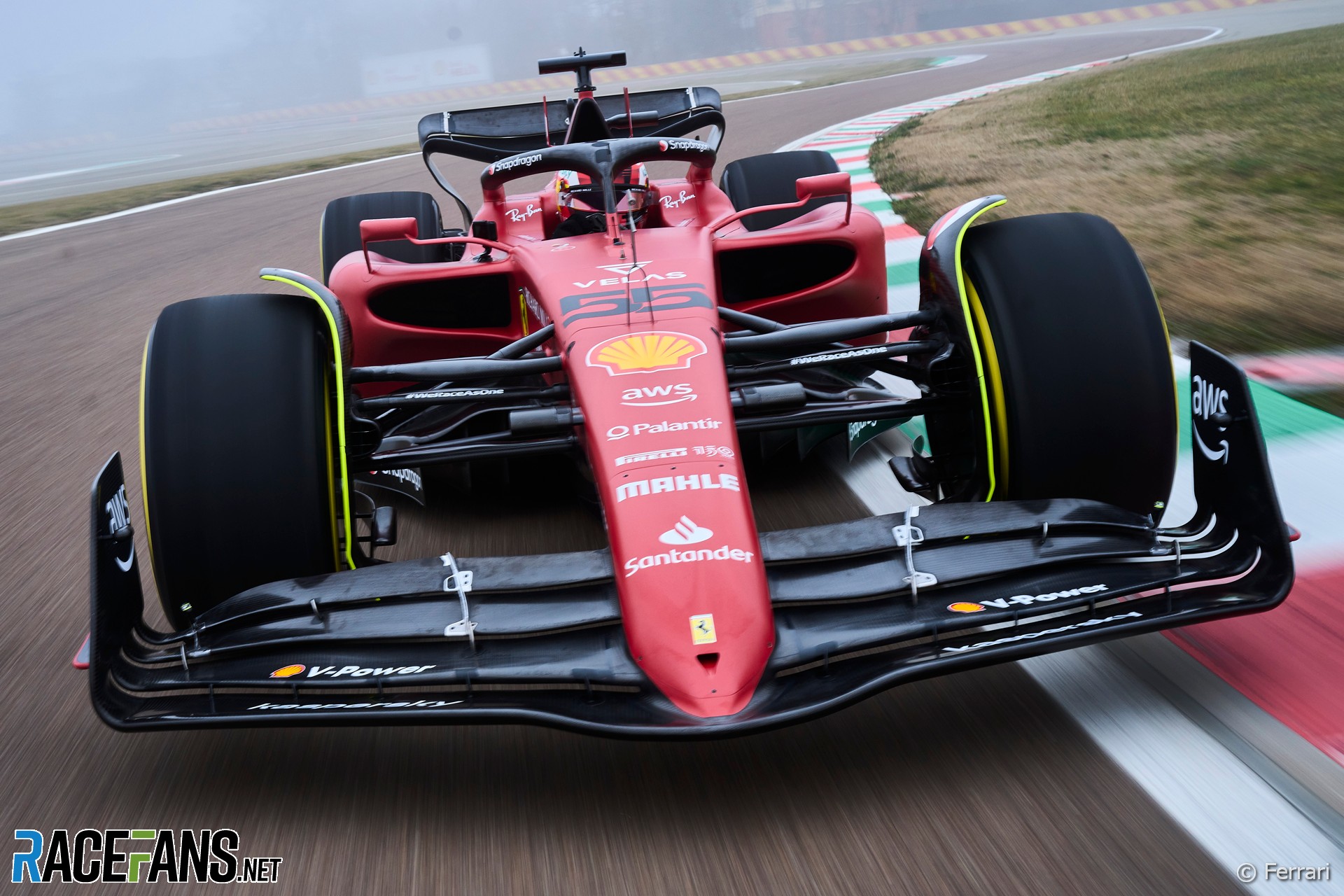 Ferrari’s 2022 F1 contender, the F1-75, is named to mark the 75th anniversary of the first car to carry the Ferrari name, and carries the hopes it will end their 14-year wait for a world championship trophy.

Like every other car on the grid, the new Ferrari has been designed to meet radically altered regulations. The team ended 2021 on an upward trajectory which it will be eager to continue amid the disruption caused by the switch to a new rules set.

The team was quick to halt work on its 2021 campaign to press ahead with the F1-75. The car revealed on Thursday, which lapped Ferrari’s Fiorano test track the day after, features a number of innovations and shapes which set it apart from the cars that were launched before it by Haas, Aston Martin, McLaren, AlphaTauri and Williams (Red Bull presented a show car).

The team’s head of chassis, Enrico Cardile says that the team has taken an “innovative approach” to the new regulations and has emphasised that “Aerodynamics was definitely our number one priority.”

The F1-75’s curvaceous sidepods are certainly its most eye-catching feature. While their press material and video lack an overhead shot of the vehicle, it is easy to tell that the sidepods are much wider and continue back for longer, similar to the AMR-22.

However, unlike the AMR-22, the Ferrari does not have aggressive undercuts. Instead the Ferrari’s sidepods are nearly completely flat where their sponsor’s logos for Shell and Ceva logistics are placed (1). It seems Ferrari has opted to prioritise preventing the outwash from the front of the car coming back inwards rather than using undercuts to direct air over the diffuser. 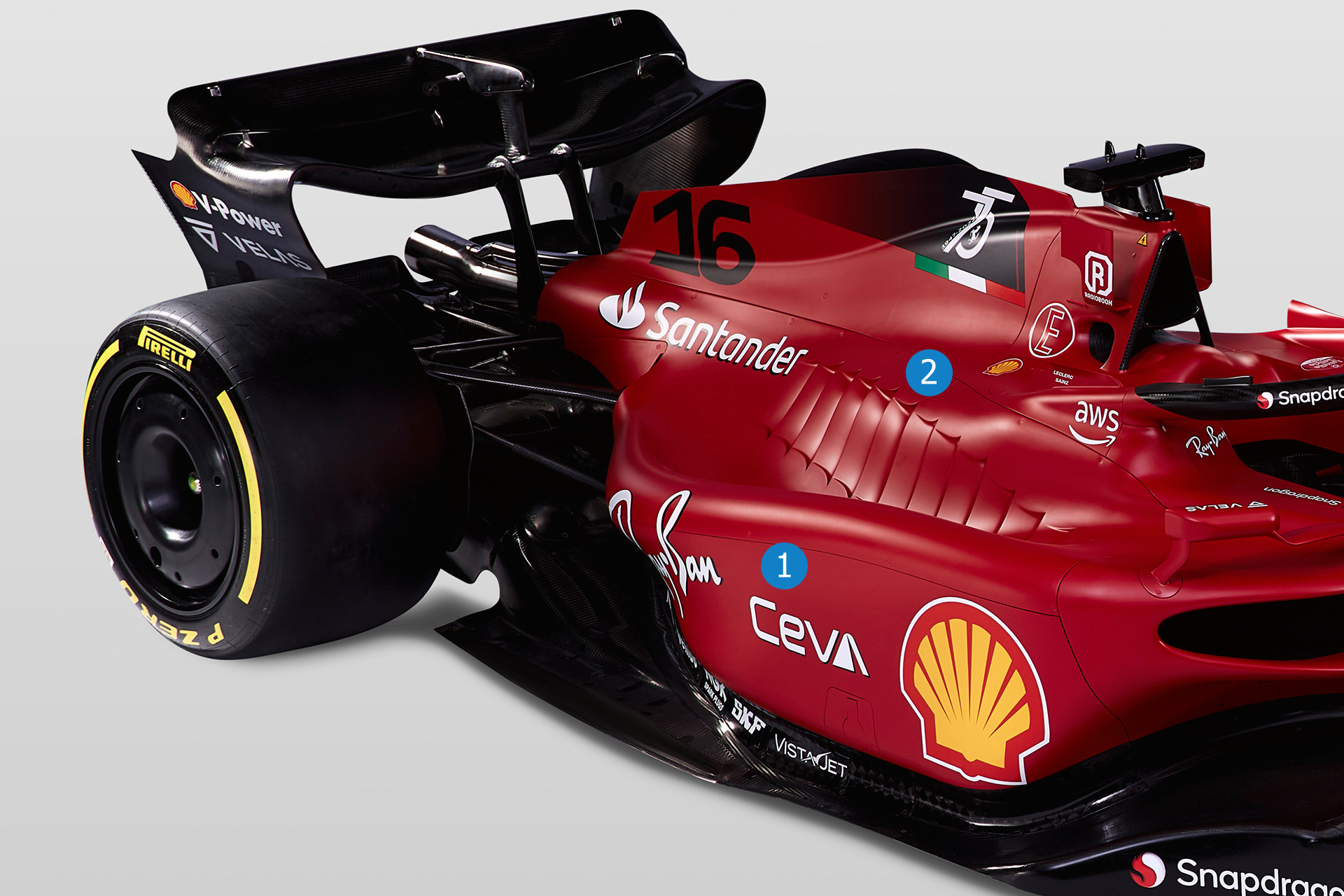 With the engine cover being ‘shrink-wrapped’ and tidy, it is likely that Ferrari has opted to achieve most of their cooling through their sidepods rather than behind or on top of the power unit.

Like the AMR-22, the F1-75 also has a set of louvres over the top of the sidepods (2). The 12 slots on each side begin relatively parallel to the ground but twist to a near-45 degree angle as they approach the rear of the vehicle.

These louvres, returning with the 2022 regulations, will vent hot air around the middle of the car and allow Ferrari to design significantly smaller rear cooling exits, helping to reduce drag. 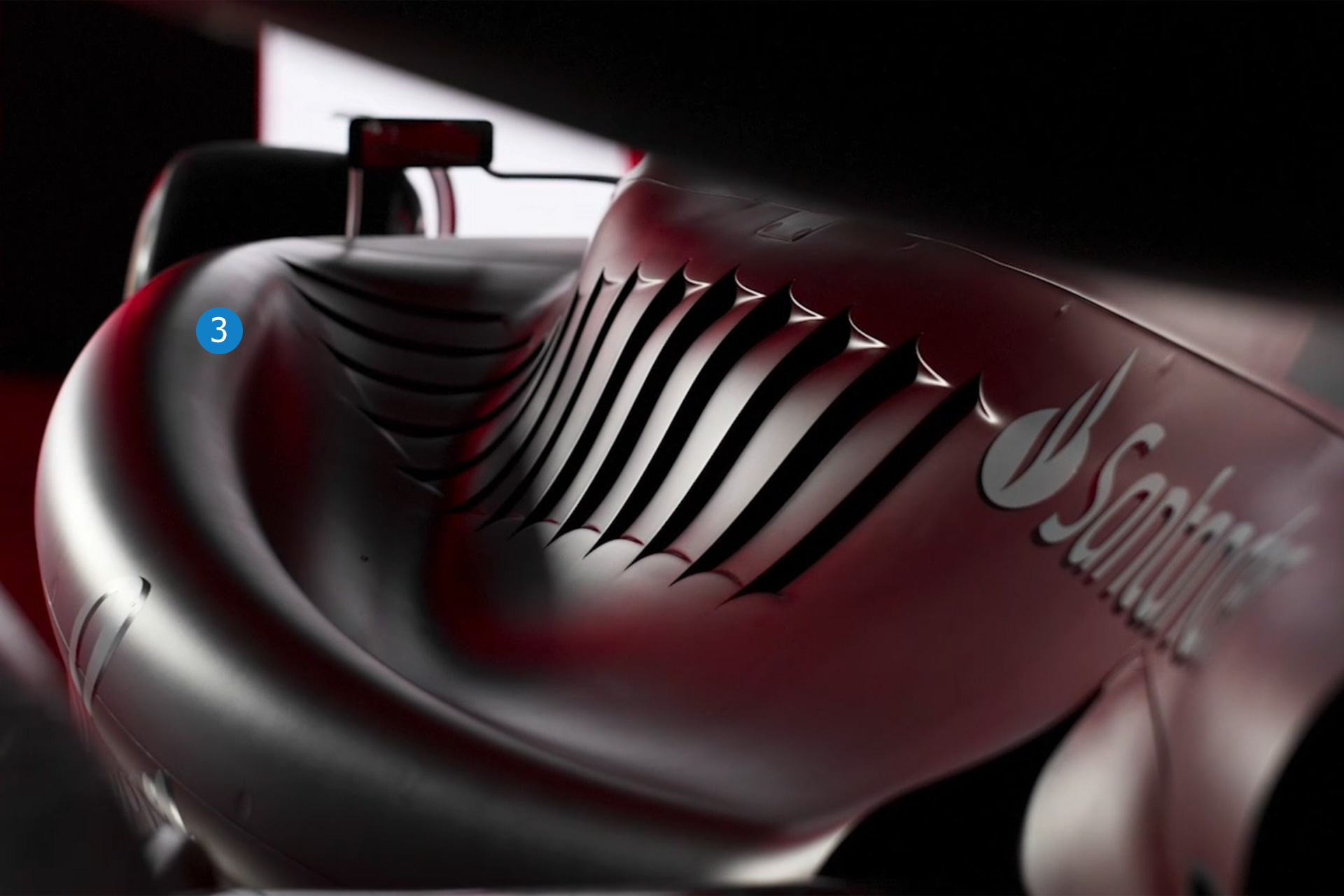 Another differentiating feature of the sidepods is the heavily sculpted top surface (3). This concave section is unique to Ferrari’s 2022 F1 contender among the cars revealed so far.

It may also be that by sculpting the sidepods to channel faster air over the cooling louvres, Ferrari is able to take advantage of Bernoulli’s principle and ‘suck’ air through the louvres, improving their cooling in the sidepod. By creating a greater pressure differential across the radiator, Ferrari would be able to increase its cooling capacity without further opening the inlets or creating a larger expansion area. 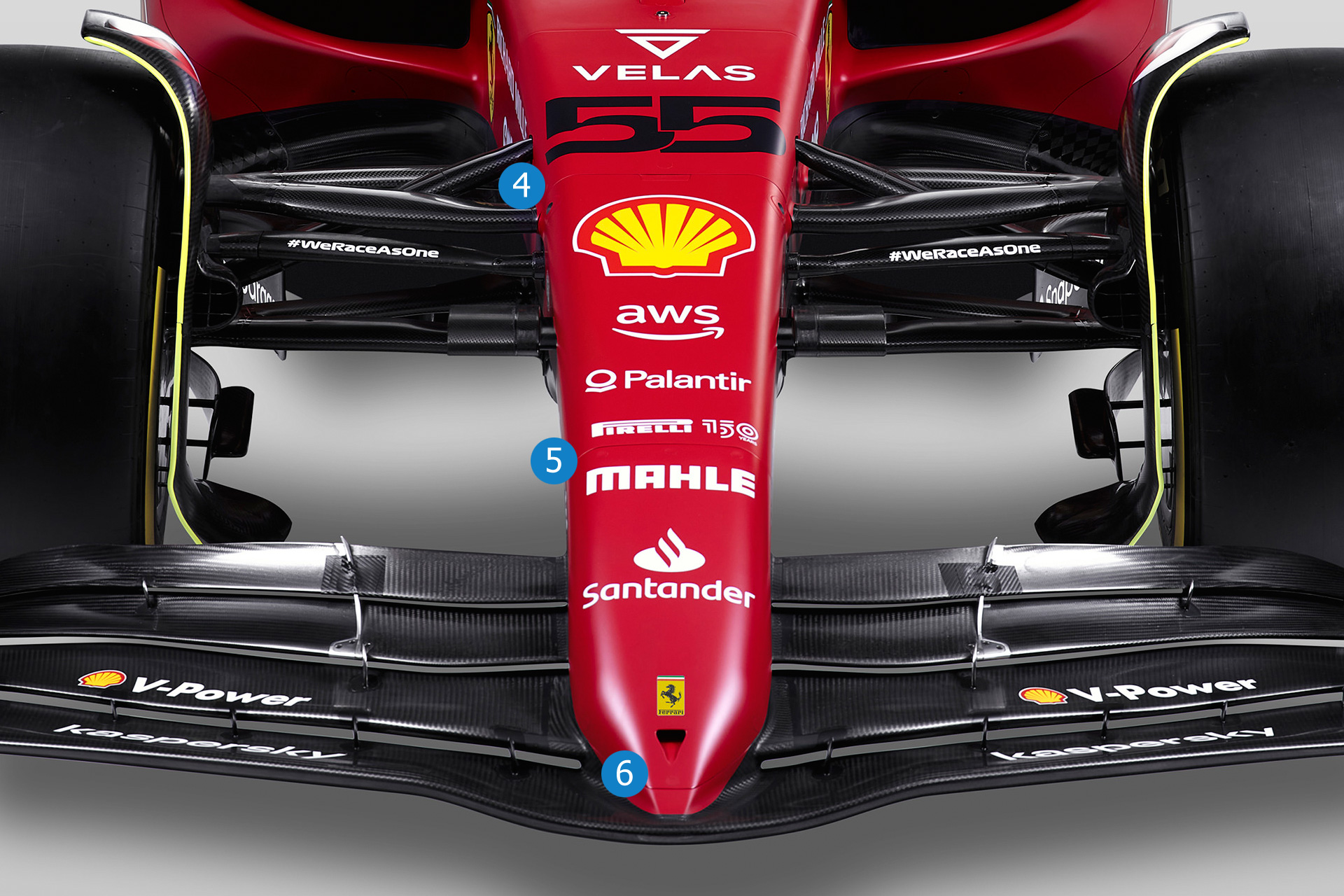 Ferrari has also approached the challenges presented by the regulations governing the nose quite differently from the rest of the launched cars, opting for a long and pointed design. Unlike the cars of Aston Martin, McLaren, Haas and Williams, where the nose is attached to the second element of the front wing, Ferrari’s connects all the way to the main plane of the front wing, similar to that on AlphaTauri’s renderings.

Additionally, the tip of the nose is much sharper than the others on the grid. The F1-75 is also the first car to launch with a small NACA duct placed near the tip (6). It is unclear where the NACA duct redirects the air to but it may just lead to the underside of the nose to help the flow underneath attached.

A second split line down the nose can be seen between the Pirelli and Mahle logos (4), with the first being above the Shell logo (5). This indicates that Ferrari has opted to separate the crash structure element (upper half) from the aerodynamic part of the nose. This modular design will allow Ferrari to rapidly evolve and change the front wing and nose designs without having to re-homologate the crash structure – a useful trick in a season where teams will likely need to advanced their early designs as quickly as possible. 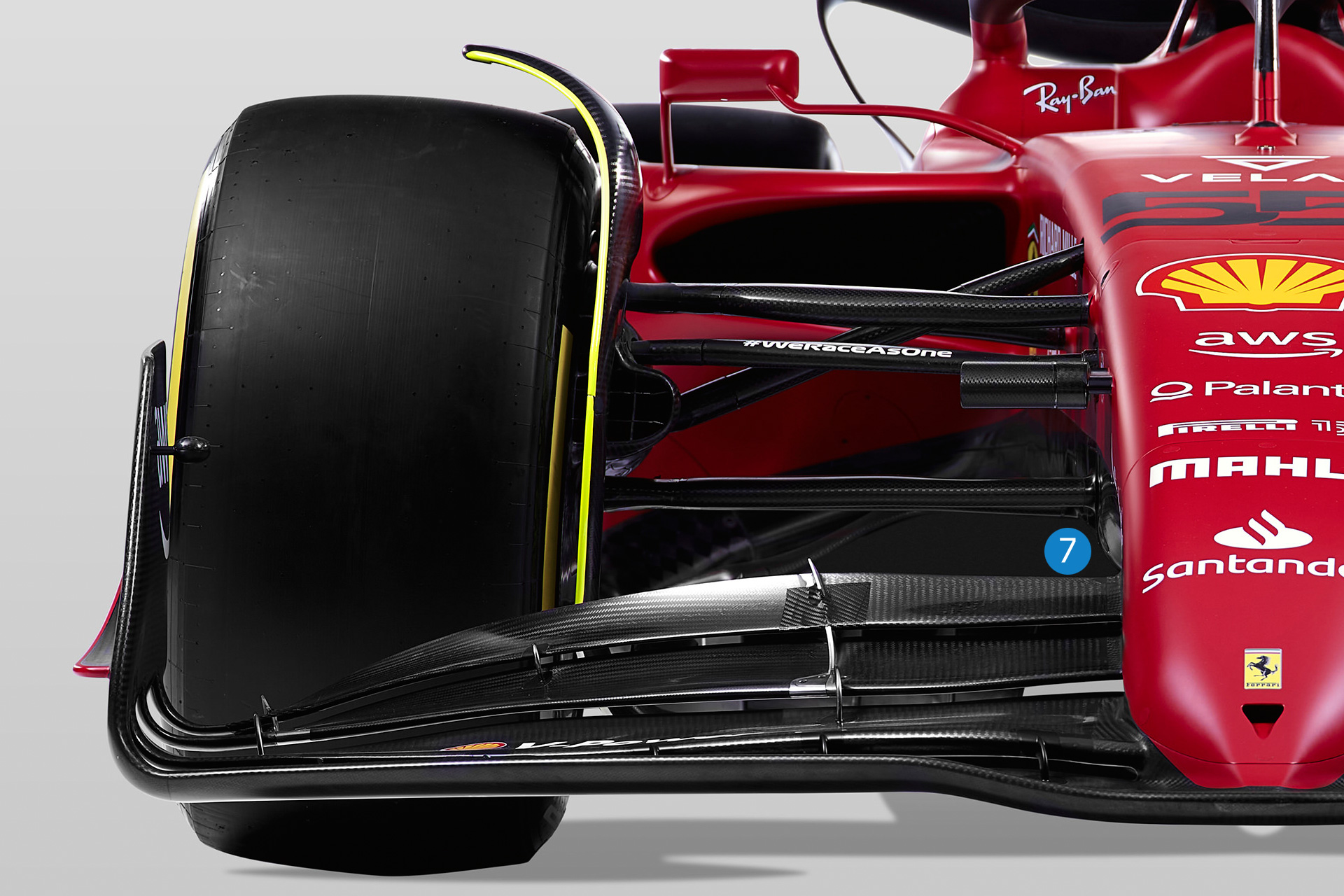 The front wing on the F1-75 is not as aggressively shaped as others we have seen. Viewed from the front, it lacks the dynamic curve on the final element that many of the other 2022 cars have launched with (7), and attaches higher up the nose. Furthermore, the front wing has a relatively shallow profile. 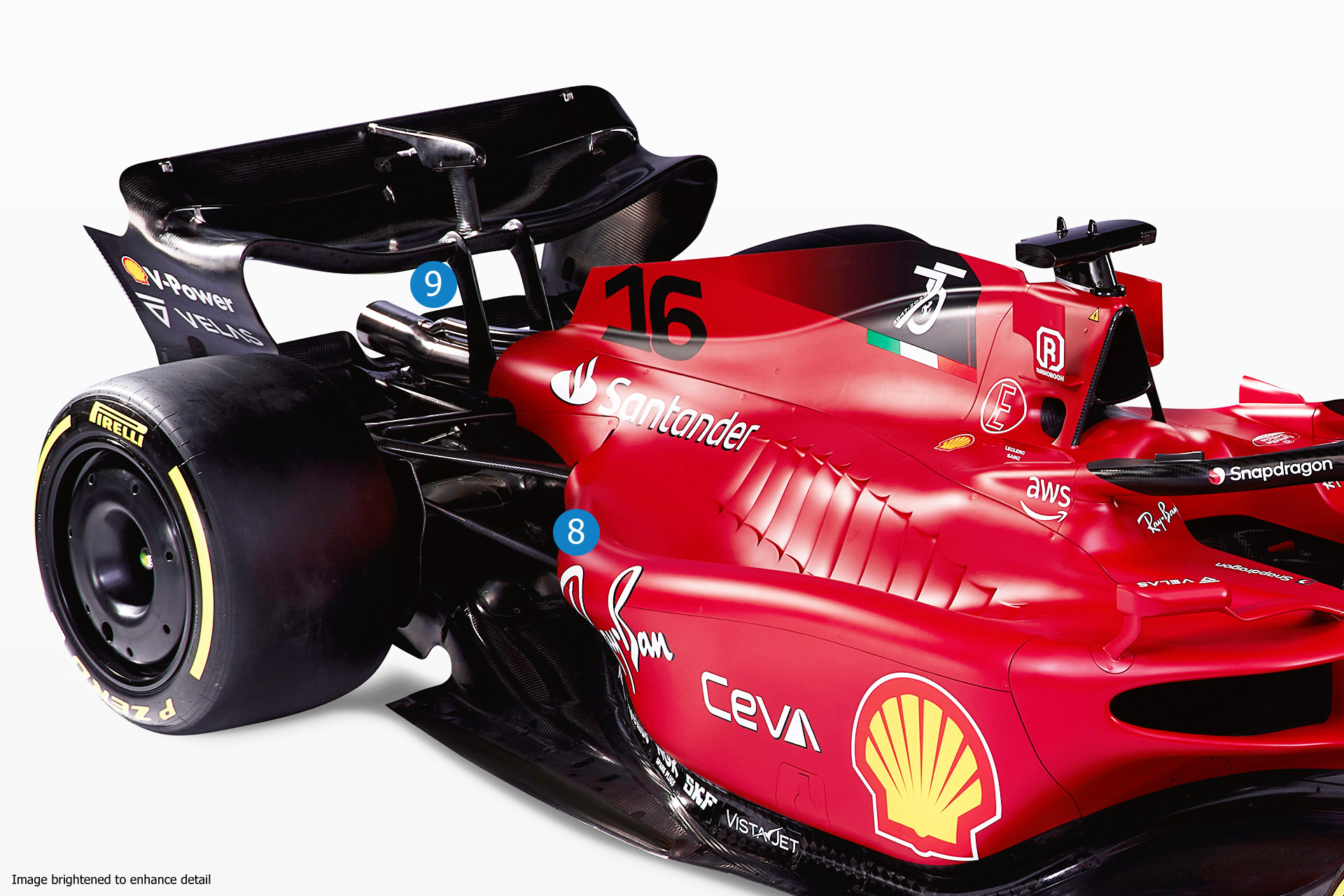 Other notable features include the Ferrari’s brake ducts, suspension layout, rear wing mounts and ‘devil horns’ on the sides of the airbox.

The brake ducts on the Ferrari sit somewhere in between the large ones on the Aston Martin and the tiny slits on the McLaren. The suspension concept is in line with many of the other launched cars with push rod front suspension and pull rod rears.

However, it is interesting to see how far forward the rear wishbones are attached to the chassis. It is significantly further forward than the centre of the new 18-inch wheels (8). This is perhaps to make more space for the diffuser tunnels.

Ferrari has opted for a double swan-neck solution for the rear wing mount. Interestingly, the rear wing mounts attach mid-plane (9) of the rear wing rather than on the top side like AlphaTauri, Aston Martin, and the leaked Alfa Romeo. The F1-75 also has ‘devil horns’ on the sides of the air intake, reminiscent of the design McLaren used on its MP4-20. These are likely intended to help clean up the airflow for the central portion of the rear wing and enable it to produce more downforce.

Like many of its rivals, Ferrari has been very careful not to give any information about their underfloor aerodynamics. The front-on render shots have the inlet to the underfloor masked out and even at the online event Ferrari carefully avoided showing the area.

It looks like the car on display had the four vertical vanes in the inlet that we have seen on some of the other launch cars but it is doubtful that the floor is race-spec. In an era where underfloor aerodynamics will be a defining feature of the performance of these vehicles, teams are doing their best to keep their cards close to their chest until the last possible moment.