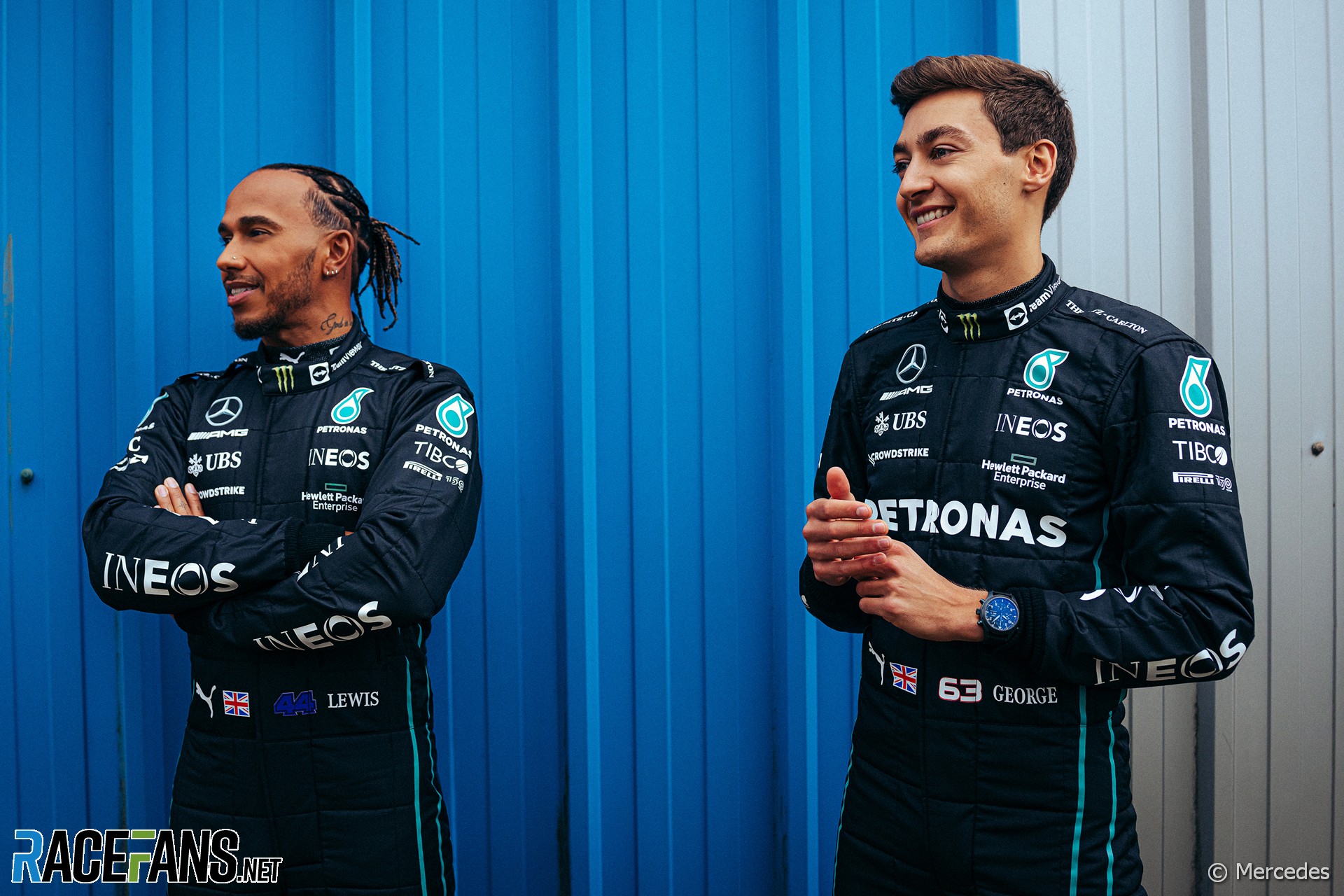 Five years after joining Mercedes as a junior driver, George Russell is about to begin his first season as a full-time member of the reigning world champions’ team.

On the face of it, the leap from Williams, the team that finished last every season from 2018 to 2020, to the outfit which just won their eighth consecutive title, is enormous. But Russell’s long association with Mercedes has eased the transition, he explained last week.

“I’d say it’s been as I would expect from a world championship-winning outfit,” said Russell. “They are absolutely on top of every single detail and it’s so impressive to see.

“I guess I almost maybe took it for granted when I was a Formula 3 driver and a Mercedes F1 simulator driver, travelling around and seeing how they operate. But it’s so impressive from the simplest of things to the most technical things of the whole operation. I really do feel like I’m at home.”

He has the added benefit of having already driven for the team once, as a substitute for Lewis Hamilton at the Sakhir Grand Prix in 2020. Returning just over a year later as Hamilton’s full-time team, Russell said “it doesn’t even feel like a transition period” this time.

“It just feels like I’m with a team who I’ve been with over the past years. It was only recently I realise I’ve actually driven a Mercedes F1 car every single year since 2017, so I do really feel immersed with these guys.”

Russell signalled his readiness for a move up to the top flight with a series of impressive results in his third season for Williams. Besides the headline-grabbing front-row spot at Spa, which yielded second place in the one-lap ‘race’ which followed and third on the grid in Russia, Russell was regularly in contention for other points finishes.

He believes he still has a lot of potential to improve, however. “As a driver, compared to the one that Williams took three years ago, I’m far more complete,” he said. “But I’m far from the end product.

“I’d say raw speed never changes but you learn how to get more out of your equipment and the team around you. That’s where I’ve learnt a lot and how I’ve progressed.

Nonetheless, heading into his first full season as a Mercedes driver, Russell plans to stick to the approach which has served him well so far.

“Because I feel like I was doing my absolute maximum, my best to give me the best possible shot at the Mercedes seat in the first place. If I feel like I could be doing more this year, I would have been doing it anyway.

“So I think it’s important not to over-analyse and not to change too much when I feel like I’ve got a system that’s been working for me. It may be very different to someone else, but for me, I feel like it is working and I want to continue what I have built on over the past four or five years.”

However he’s well aware that he’s been handed a significant opportunity. Not merely in terms of joining one of F1’s top teams, but in the opportunity to learn from arguably the greatest, and certainly the most successful, driver of all time.

He and Hamilton already know each other well from earlier in their careers. Following Russell’s time at Williams, the pair are getting reacquainted.

“My working relationship with Lewis over the past three years hasn’t been as close as it probably was four or five years ago when I was the junior driver and seeing him work week-in, week-out,” said Russell. “But it always amazes me how somebody so talented and successful as Lewis continues to strive for more.

“That is incredibly inspiring and motivational for me as a young driver to try and reach the heights that Lewis has achieved. And what an opportunity for me to be his team mate, to learn from him and see how he goes about his business. I think we can have a really good relationship between the two of us and we can really work well together to push the team forward.”

Hamilton’s future was a subject of considerable speculation over the winter following the controversial end to last season. Russell makes it clear he believes the handling of the season finale in Abu Dhabi was “incorrect”. But he doesn’t believe Hamilton’s appetite to fight for another title has been diminished by the blow he suffered at the end of 2021.

“I think Lewis is a fighter,” says Russell. “He’s a racer. His absolute main priority is to be the best version of himself when he hits the track in Bahrain for race one.”

When Hamilton made his debut 15 years ago, he made an immediate impression by holding his own against reigning, two-times world champion Fernando Alonso. It must have crossed Russell’s mind that he could do the same.

But he insists he hasn’t considered the possibility of how he’ll measure up against Hamilton. “It’s something I have not even thought about, to be honest.”

The drivers’ focus must be on responding to the challenge presented by the new technical regulations. “My main goal is to make sure that I have the team and the car around me and developing the car in the correct direction to give us the best opportunity over the course of the next two, three, four years,” he says.

“Because we’ve seen the development rate, we hear rumours from all the other teams of how much they’re developing. We’ve got to remember that Formula 1 developed this rules set with the idea that they were going to be around four seconds slower and we’re already hearing from every single team that they’re far, far faster than that.

“So Lewis and I need to work together. We can’t focus too much on each other because things are constantly changing and that’s what we need to take a step back. We hope Mercedes will still be the fastest team, the fastest car on the grid. But there’s no guarantees and we need to not be naive to work together to ensure that we are.”

The 2022 regulations has handed Mercedes’ rivals such as Ferrari, McLaren and Alpine the opportunity to drastically close the gap to the front-runners. “We need to prioritise the pace of the car before prioritising each other,” Russell emphasises.

“Things aren’t going to be quite as clear-cut as they were in the past three years when the regulations have been stable, things have tailed off and there’s only small improvements coming here that. The rate of improvement is going to be massive this year and we need to make sure we’re sharing as much data as possible between each other work and as well as possible with each other because it’s in our own interest to make sure we have the fastest car.

“If that time comes, then we can potentially worry about each other. But until then it’s full focus on making the fastest car possible for each of other.”