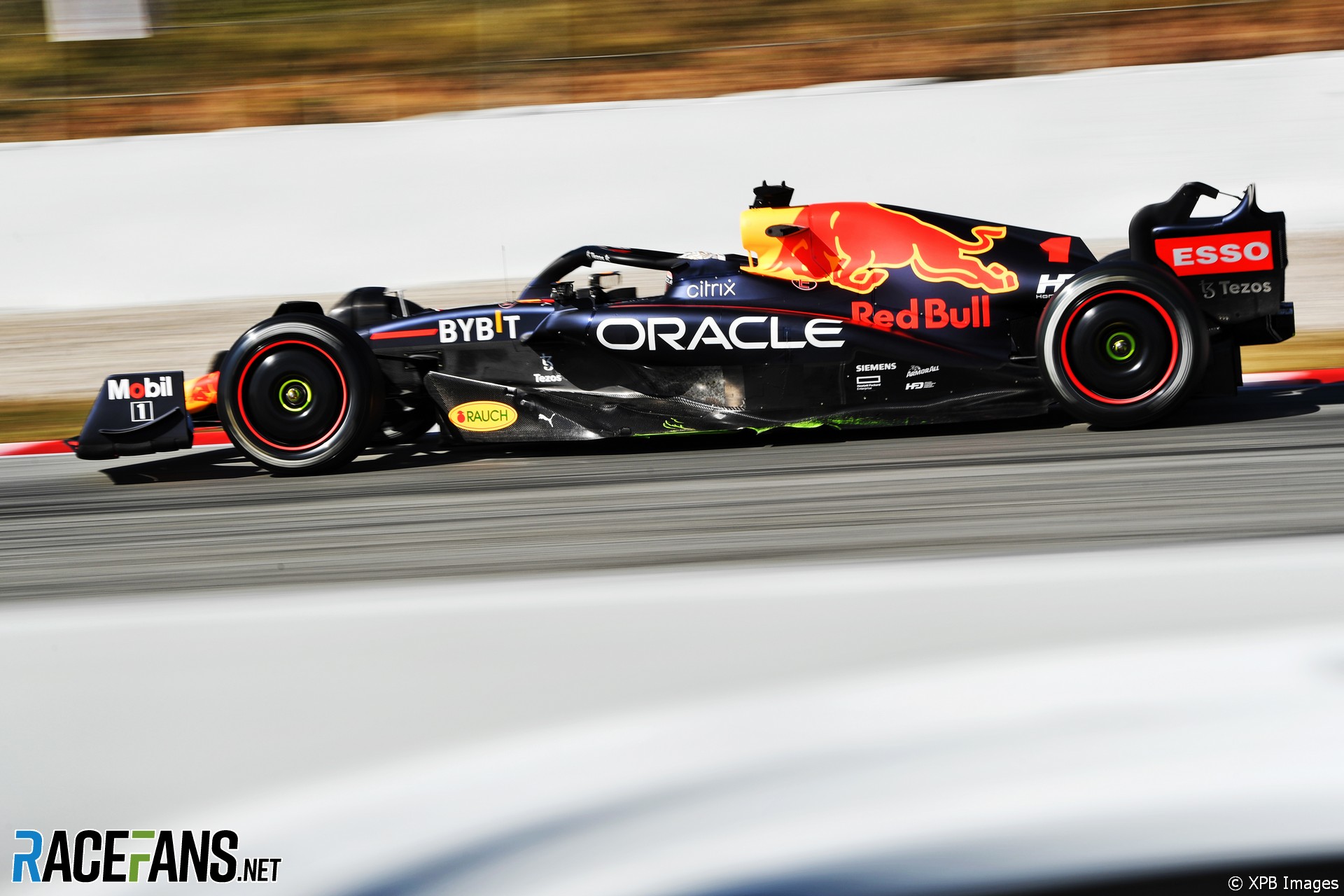 Red Bull finally revealed their 2022 Formula 1 season contender on the first day of testing. At a stroke, it became obvious why they were so secretive, displaying a show car at their ‘launch’ event two weeks ago.

The team which has so often innovated with its designs has produced another striking machine for a new set of regulations. Its overall design philosophy is clearly focused on aggressively optimising its aerodynamics in the signature style of chief technical officer Adrian Newey. 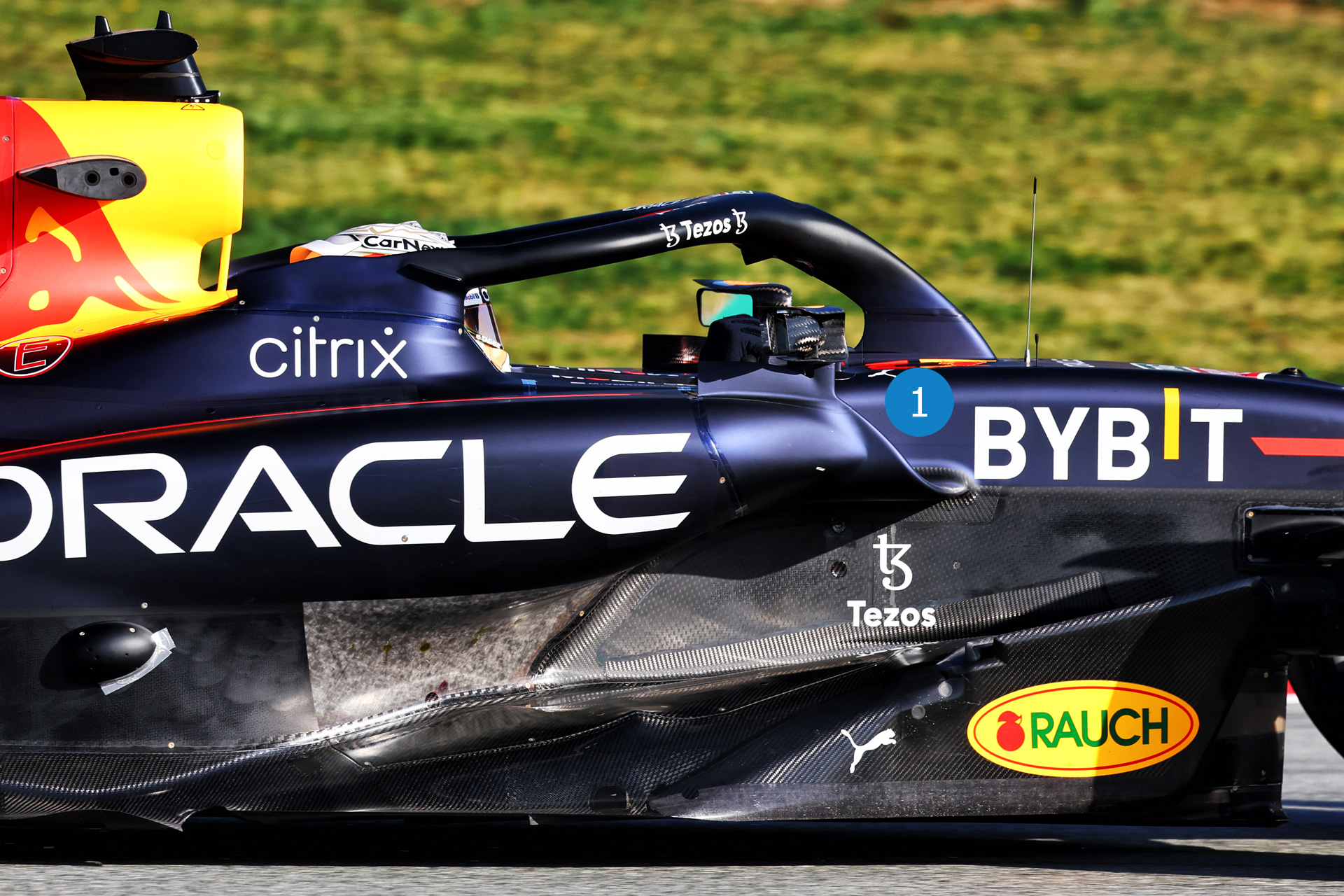 Perhaps the most eye-catching feature of the ‘real’ RB18 is the sidepod. The concept is unlike any other seen in the field. 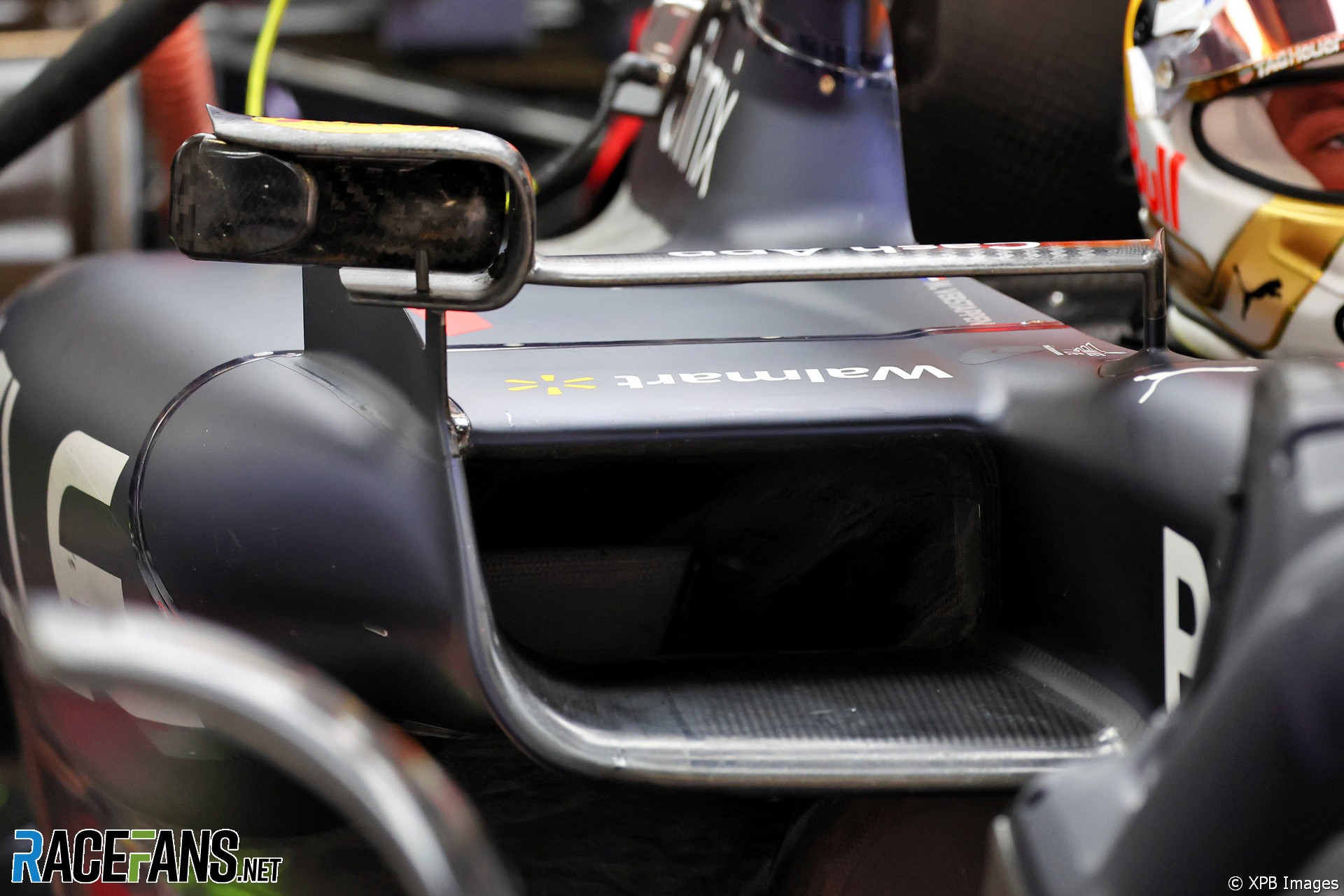 When viewed from the front, the sidepod inlet opening is rectangular and wide but is short in height to accommodate the undercut. The side view reveal how short the first part of the sidepod is due to the undercut, indicating that the radiators within must be highly compact and steeply angled.

The sidepods flare out wide, almost to the full width of the car. This is similar to Ferrari’s concept, aiming to push the tyre wake as far out as possible. 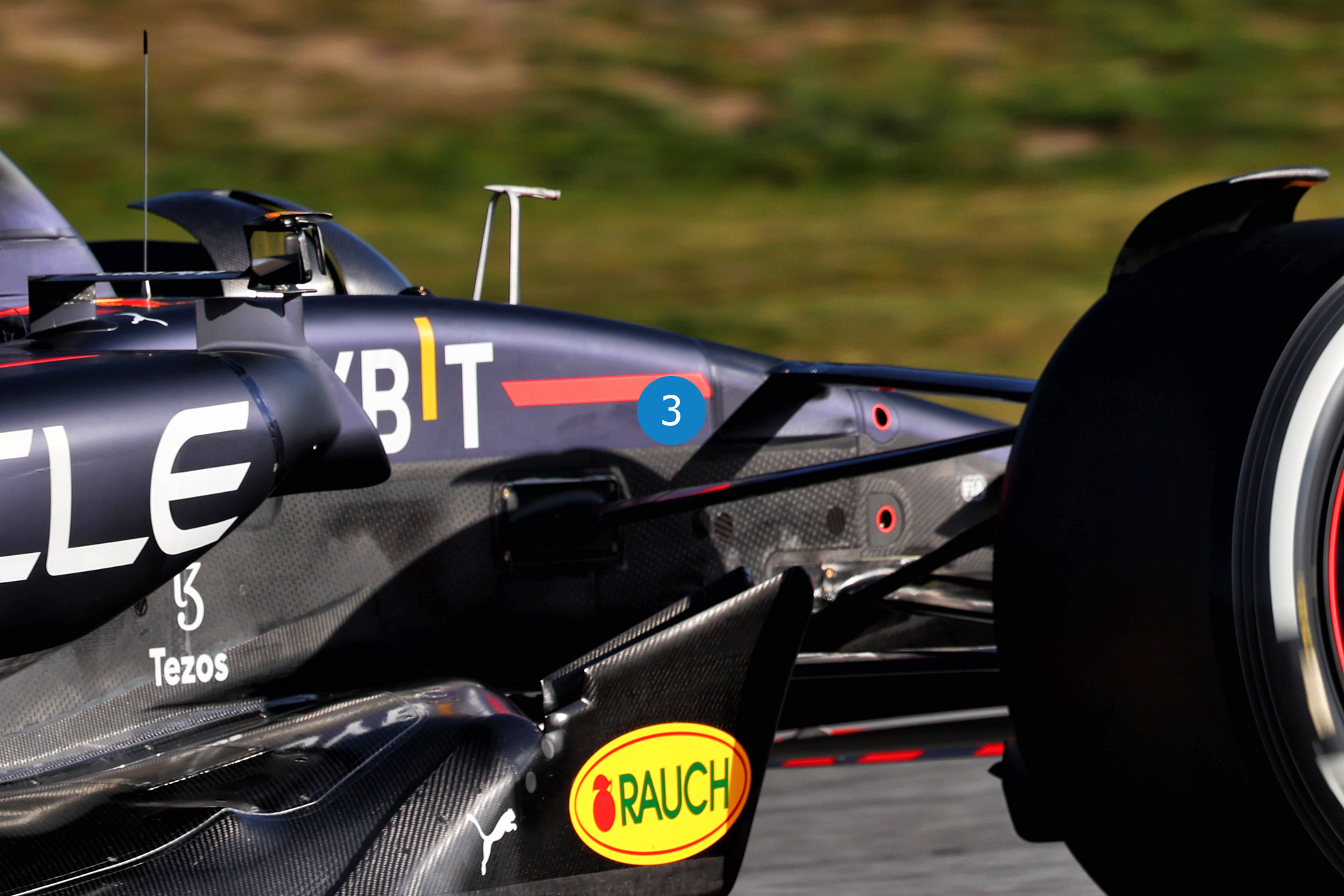 The RB18 is the only other car from McLaren’s MCL36 to run pull-rod front suspension. The front suspension geometry is also unique. The pick-up points for the top control arm (referred to as the A-arm or wishbone) vary significantly in height between the front and rear (3).

This may be an aero-driven idea: Placing the wishbones in favourable flow regions to have clean airflow into the sidepod inlet and the undercut. It may also be to provide ‘anti-dive’ suspension geometry.

Anti-dive geometry is commonly used in motorsport to prevent the car from ‘diving’ under braking. This allows for the contact patch on the front tyres to be consistent during braking but is also particularly useful when running underfloor aerodynamics that is pitch sensitive. 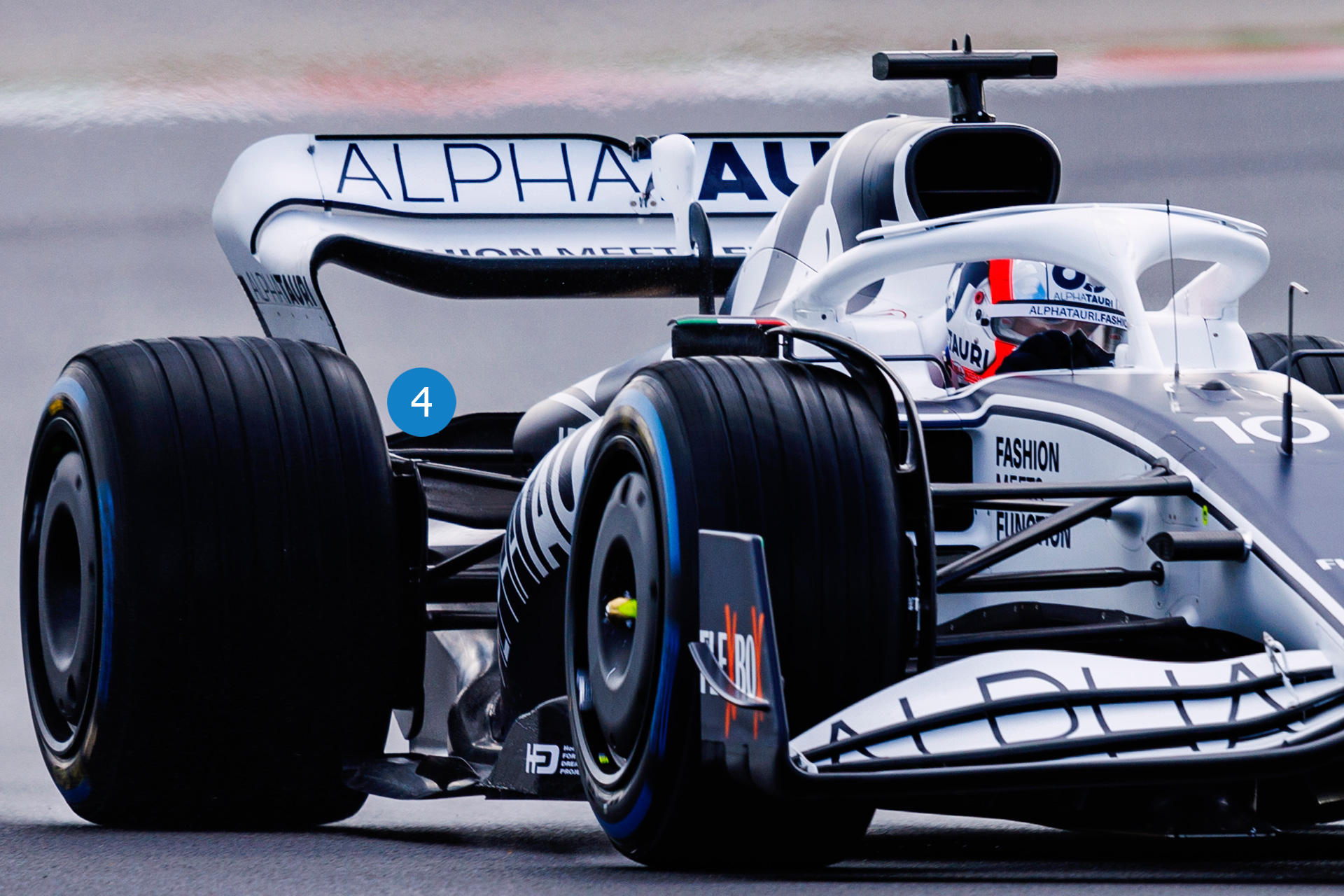 The upper control arm also has some ‘attitude’. This can be seen more clearly on the AlphaTauri AT-03, which shares the rear suspension and gearbox (4). This may be a design choice to increase anti-squat, which would complement the anti-dive geometry to help keep the floor as level as possible around the track and also alleviate any ‘porpoising’ that may occur from flow separation. Red Bull has opted for a different strategy from its sister team at the front of the car. The RB18’s front wing features a full-length slot gap (5) on the first element and the nose is not attached to the main plane. The leading edge profile does not vary much in height and the mid-section of the main plane droops slightly to the lowest permissible height as per the regulations. 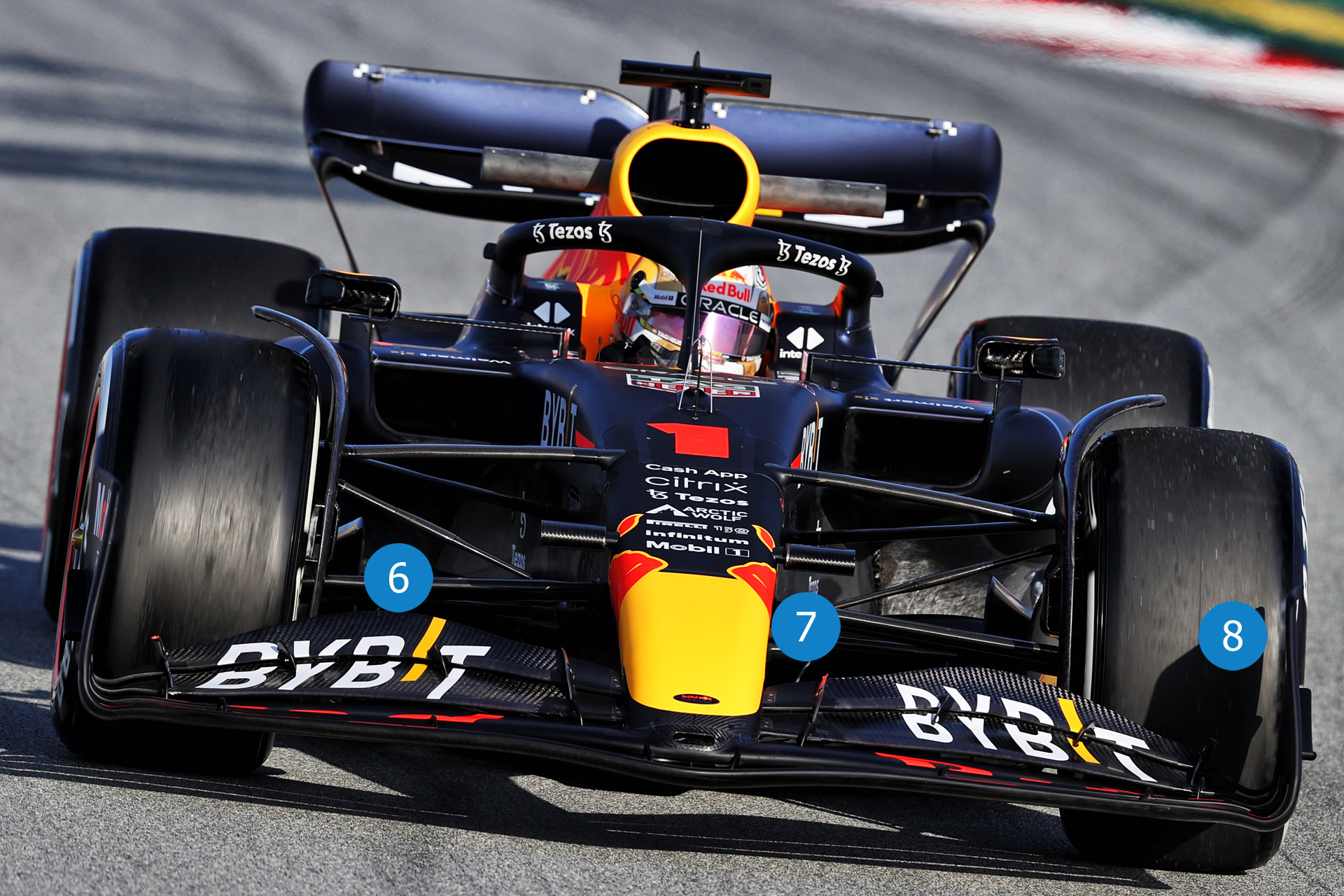 The wing seems to be mid-loaded overall (6), with the most inboard part of the front wing dropping down to allow clean air to enter the inlet of the underfloor (7). The angle of attack of the front wing overall is on the more aggressive side in line with the likes of Mercedes, with the endplates twisted out at the rear to direct air around the front tyres [8].

Furthermore, similar to Ferrari, it seems that Red Bull has also opted to separate the front part of the nose attached to the front wing from the crash structure to aid aero development over the season. 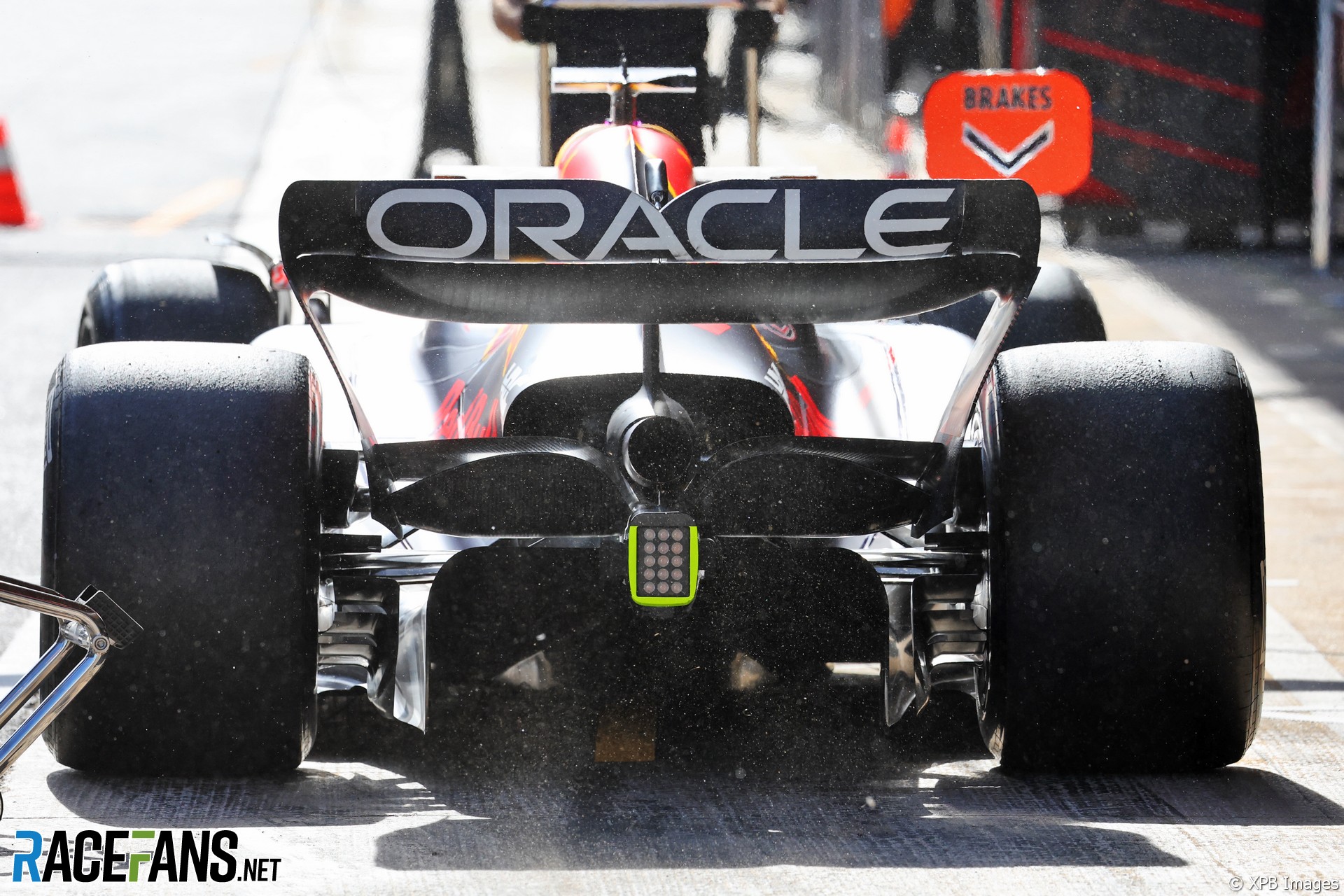 This is not a new concept for the Red Bull family: The AT02 raced by AlphaTauri last year incorporated centreline cooling and this has likely been carried over and optimized. Notably, Red Bull has also left the option of cooling louvres available for additional cooling as they briefly ran a cooling louvre configuration in the afternoon of day one testing. The floor is a focal point in the 2022 regulations and Red Bull has taken a very different approach in its design. While the likes of Mercedes have opted to use four vertical splitters in the intake of the underfloor, Red Bull utilises two of these on the outside, looking rather reminiscent of a barge board.

The outer one will function very similarly to a barge board to manage the turbulent front tyre wake. The space between the inner and outer flaps is likely designed to generate a flow structure to help create a ‘curtain’ along the edge of the undertray to help extend and seal the edge.

It is likely that Red Bull also has the remaining permitted fences inside the inlet of the floor to help direct some of the central flow outward to increase the efficiency of the diffusers. Additionally, the RB18’s underfloor leading edge is fairly low and uniform across its width like the MCL36, but the larger leading-edge radius allows the intake to be less critical to flow direction increasing the aero stability under crosswinds or during low-speed cornering. 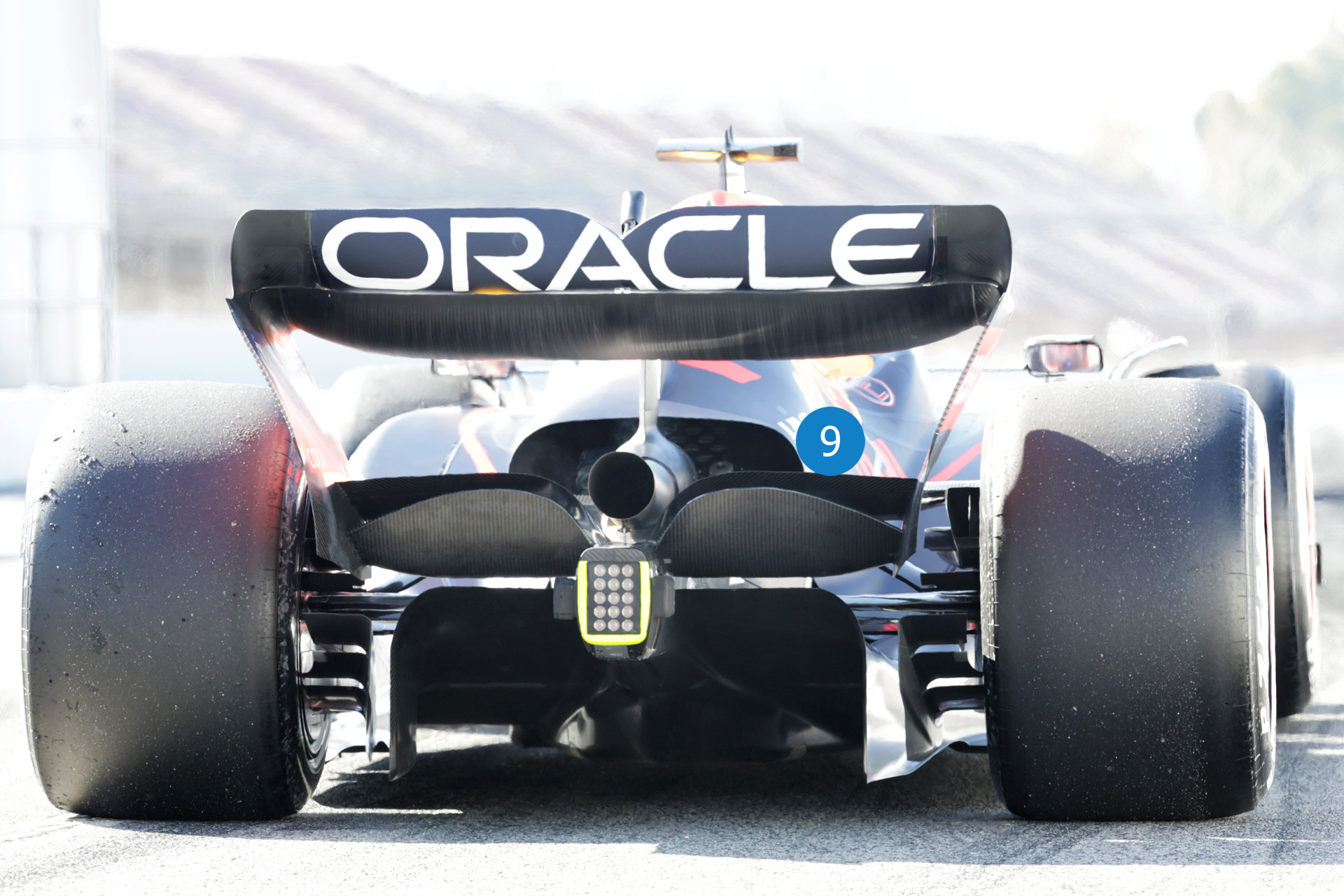 Red Bull have also innovated with the RB18’s beam wing. Unlike the regulations for the front and rear wings, the rules do not dictate a minimum or maximum overlap allowed on the two permitted elements of the beam wing and only defines a maximum planform (top view) area.

Red Bull has opted to go for a full double-decker beam wing with the profile closely following that of the diffuser (9). This beam wing will act almost like an extension of the diffuser, conditioning the flow over the top of the main diffuser tunnels to help maximize the expansion of the airflow from underneath the car. The slot gap between the two beam elements will help the airflow stay attached to the beam wing, allowing curvature to be tighter which in turn allows further expansion. 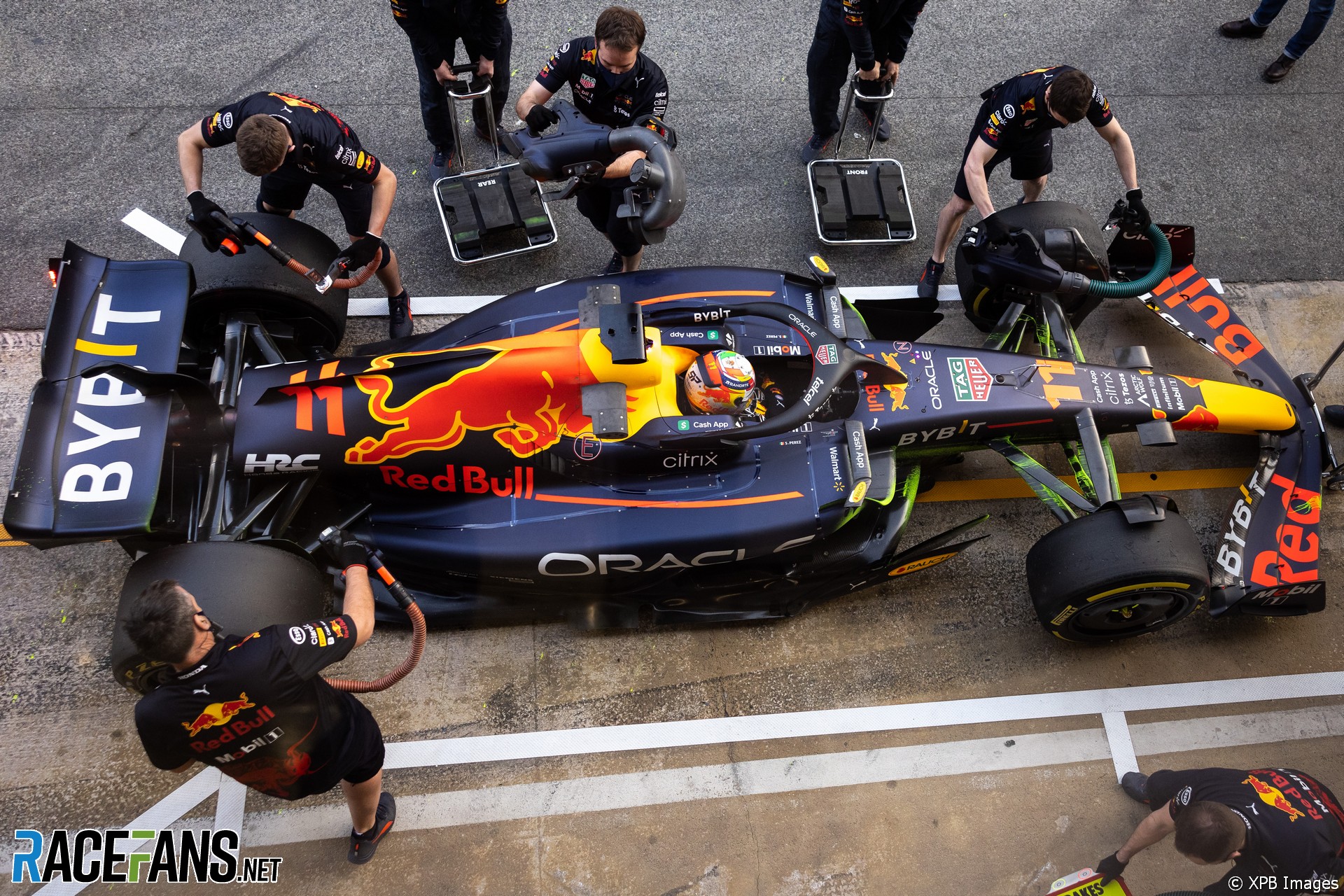 The RB18 is truly a unique contender on the 2022 grid. It remains to be seen whether or not this radically different interpretation of the regulations will present an advantage for Red Bull.