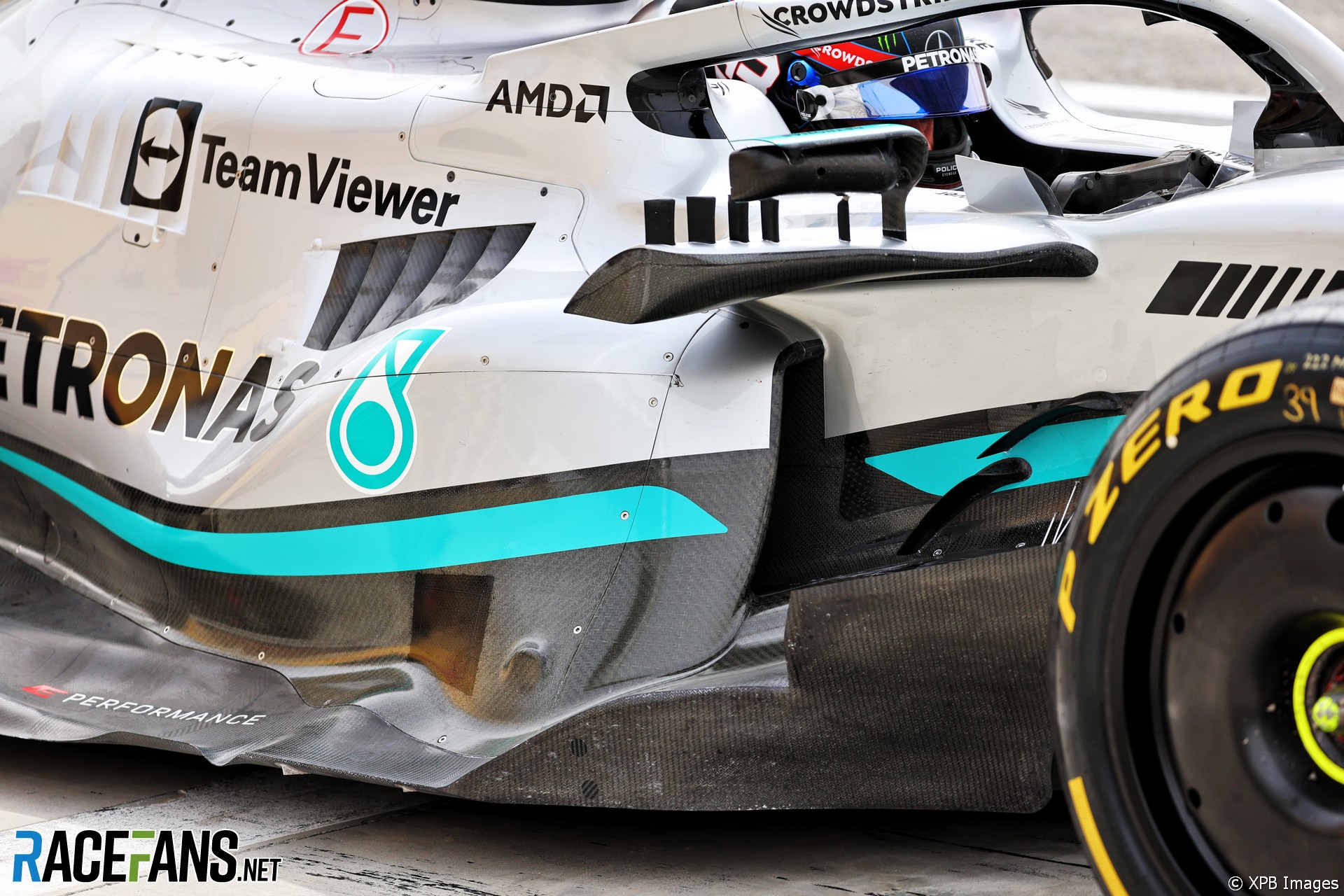 As it turns out, Red Bull was not the only 2022 contender keeping their cards close to their chest. After intense speculation, Mercedes have unveiled at Bahrain a race-one-spec chassis with a ‘slimline’ sidepod.

The extreme design has produced a sidepod which appears almost non-existent compared to some of the competition. What remains is merely a small bump on the chassis with a long vertical slit as the intake for the cooling system inside.

It has provoked appreciative comments about the boldness of the design and apparent quality of the construction, and a few murmurs that it might not follow the ‘spirit’ of the regulations. But what purpose does it serve, and how have Mercedes achieved this engineering feat?

In Formula 1 aerodynamics, controlling the front tyre wake has always been a key performance differentiator. The air disturbed by the front tyres produces an extremely volatile, ‘dirty’ flow, and if left uncontrolled it would ruin the aerodynamic performance of the latter half of the vehicle.

The wide sidepod design by the likes of Ferrari, Haas, and Aston Martin aims to control this front tyre wake by physically ‘pushing out’ the tyre wake in a similar fashion to what barge boards used to do. With this extremely narrow sidepod, Mercedes have taken the completely opposite approach to control the front tyre wake. 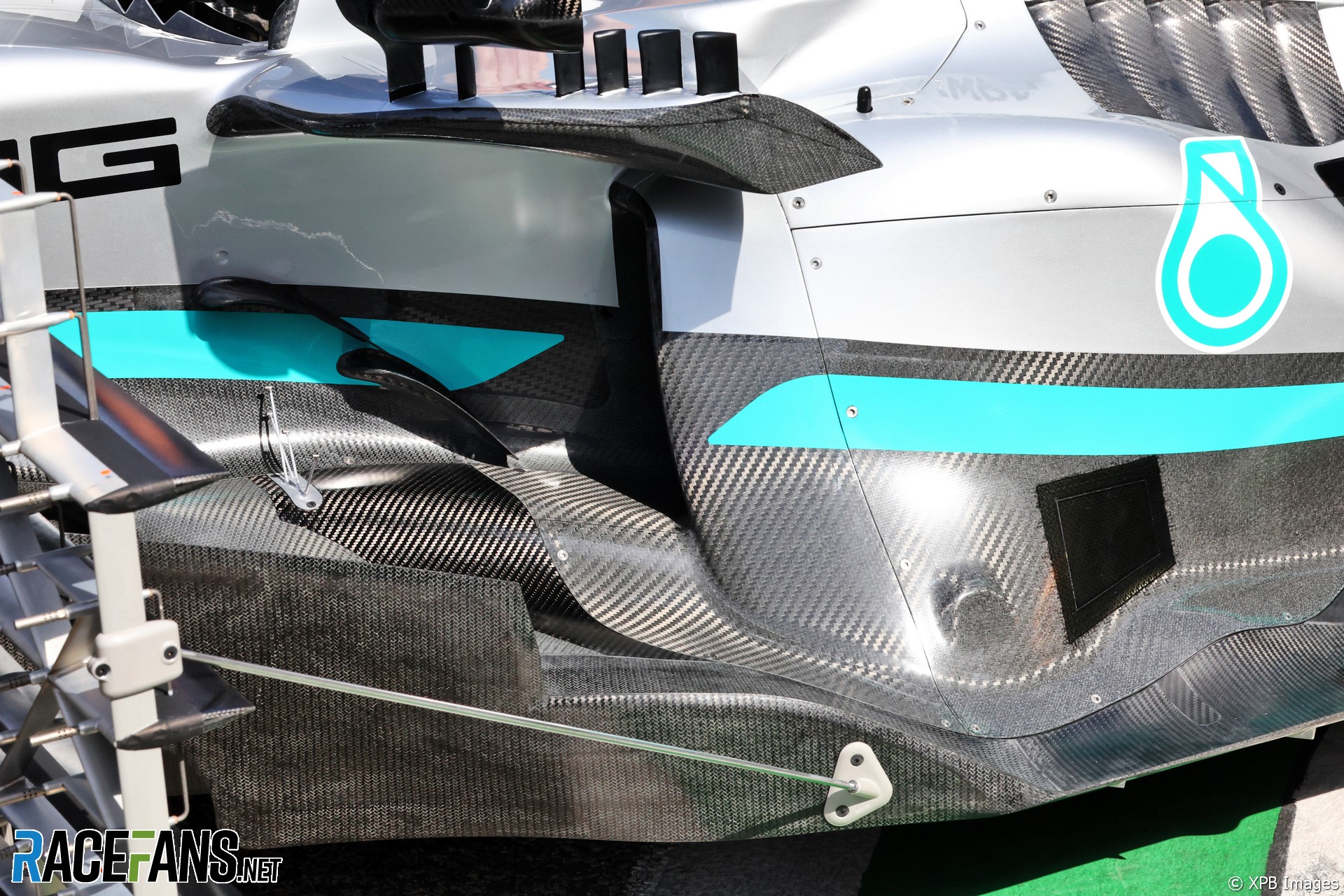 “We’ve done that using the narrow sidepod layout to stop the tyre wake sticking to the sidepod and being pulled in, whereas other teams will have gone through a route of pushing the sidepod out as far as they can to try and push it out that way. They’re just two ways of doing the same thing.”

Elliot’s comments provide an insight into the aero concept behind the sidepod design. Because Mercedes has been able to tightly package their cooling design into their chassis (more on this later), they have been able to utilise aerodynamic devices to control the front tyre wake instead of using the sidepod itself. 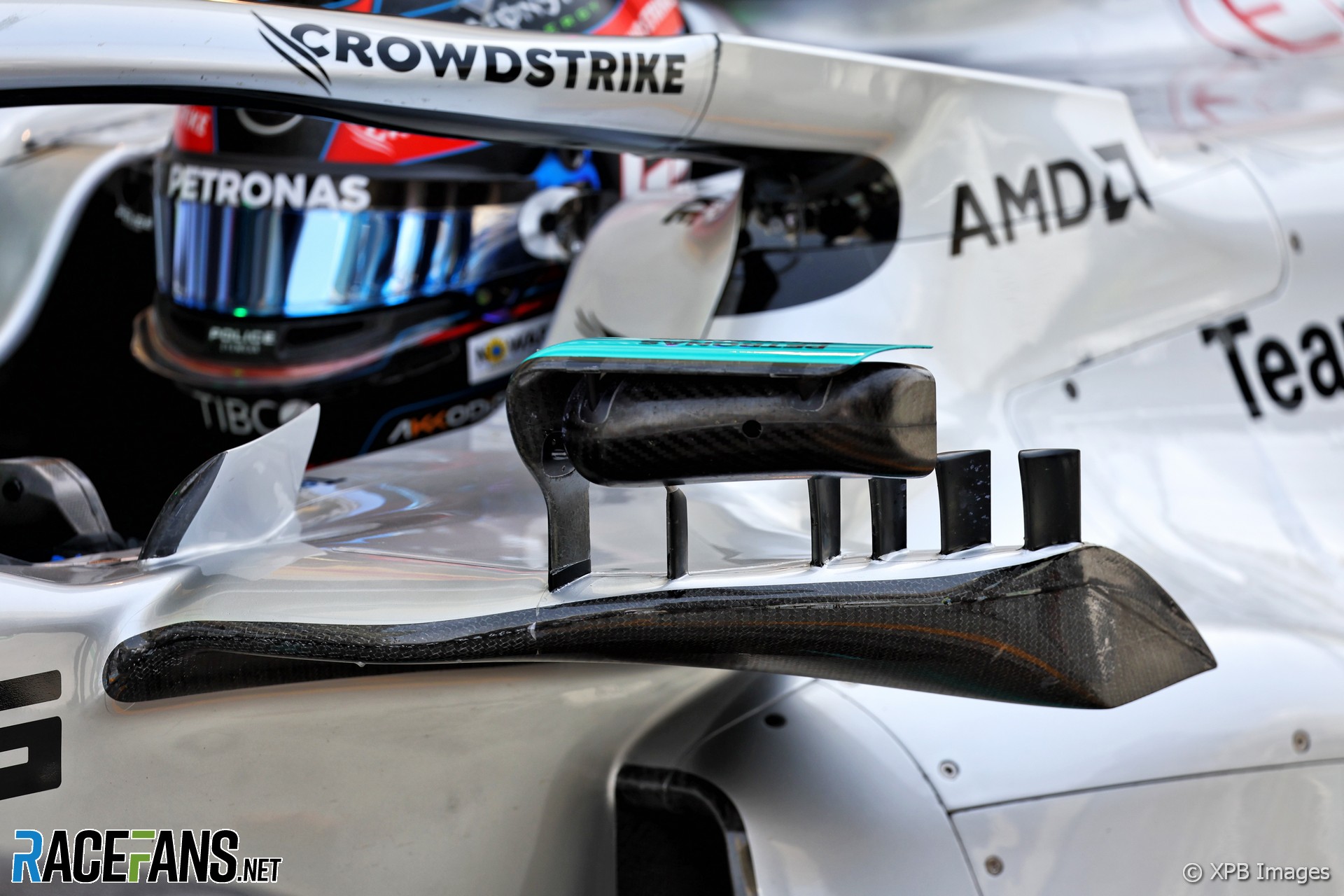 The ‘turning vane’ above the new sidepod design, where the wing mirrors are mounted, houses the upper side impact structure (above). This structure is important as its surface is angled in such a way to create a downwash providing a high-pressure region underneath. To complement this, the sidepod also flares outwards creating outwash, another high-pressure region.

Above the new sidepod, on the new engine cover, Mercedes has introduced larger cooling louvres to exhaust the hot air from the cooling system. Covered by tape in the first few runs at Bahrain, the cooling louvres have been increased to a total of five from the two we saw in Barcelona. This is likely due to the hotter climate in Bahrain.

Nonetheless, these outlets provide a stream of slower moving air to be guided towards the rear of the car up and over the diffuser, helping create a higher-pressure region that will increase downforce production. 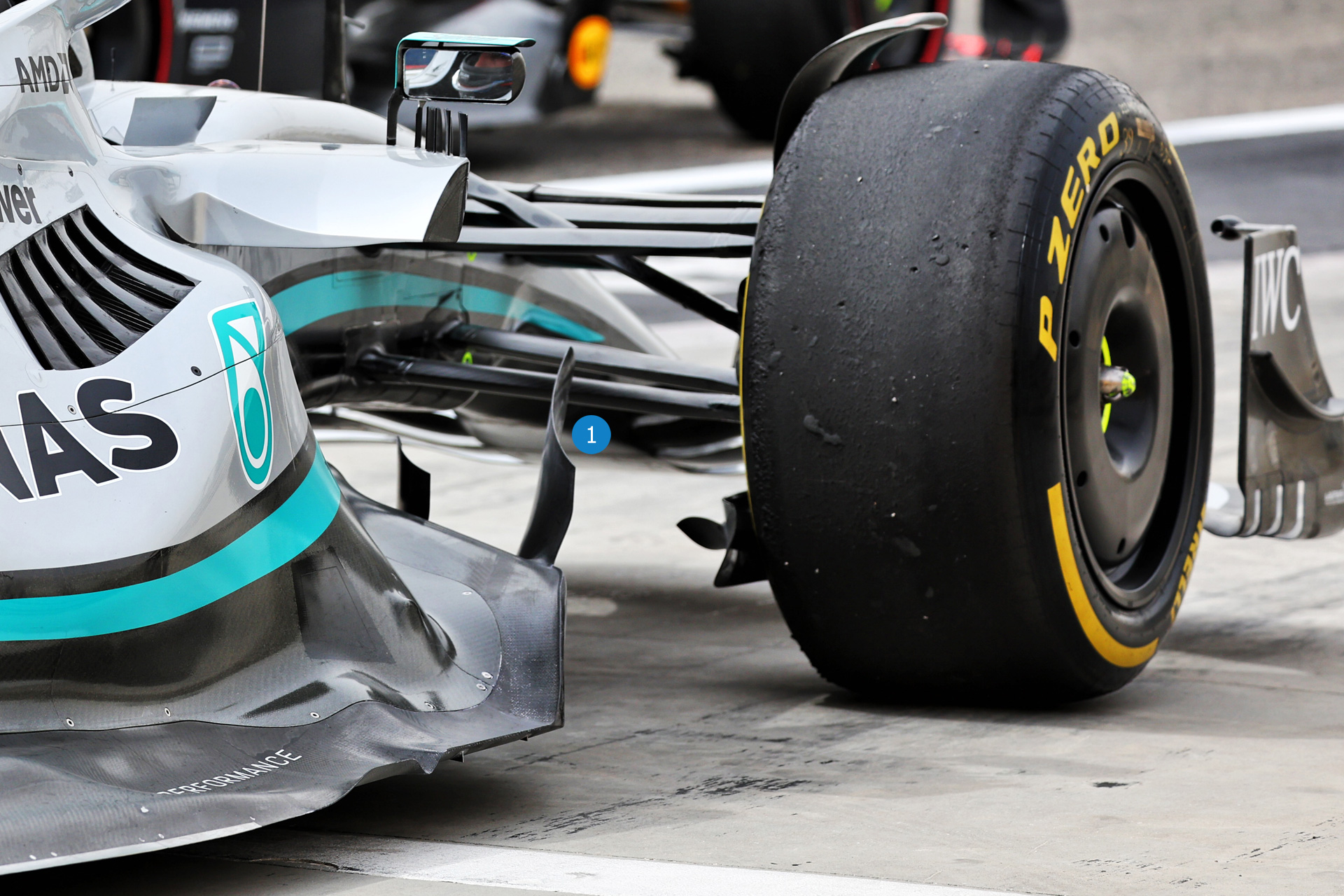 As the sidepod is much narrower, Mercedes have also updated their floor design. Notably, upstream of the sidepod, the outer turning vane has become significantly larger (1), bringing it in line with the likes of Red Bull. This will act like the old-school barge boards and help push the lower part of the tyre wake away from the inlet of the underfloor and sidepod area. 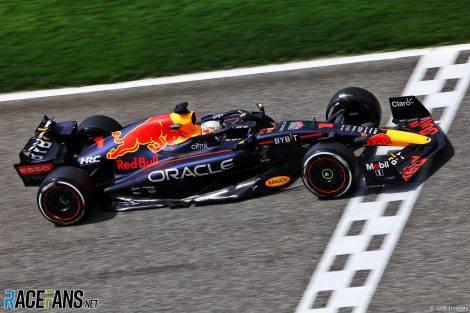 The front wing design has also been updated, altering the flow of air downstream. The uppermost element of the front wing is smaller and the endplates are twisted in order to help push air around the tyre to minimize the wake from the taller, 720mm tyres.

The question on many people’s minds up and down the paddock is the legality of the new sidepod design. The focus rests on Section 3.7.1 of the 2022 Formula 1 Technical Regulations. This section defines what bodywork declared as “sidepods” must conform to.

This section specifies the sidepod must “form no more than two curves on its external surface when intersected by any X or Y plane, each of which must be tangent continuous and open.” 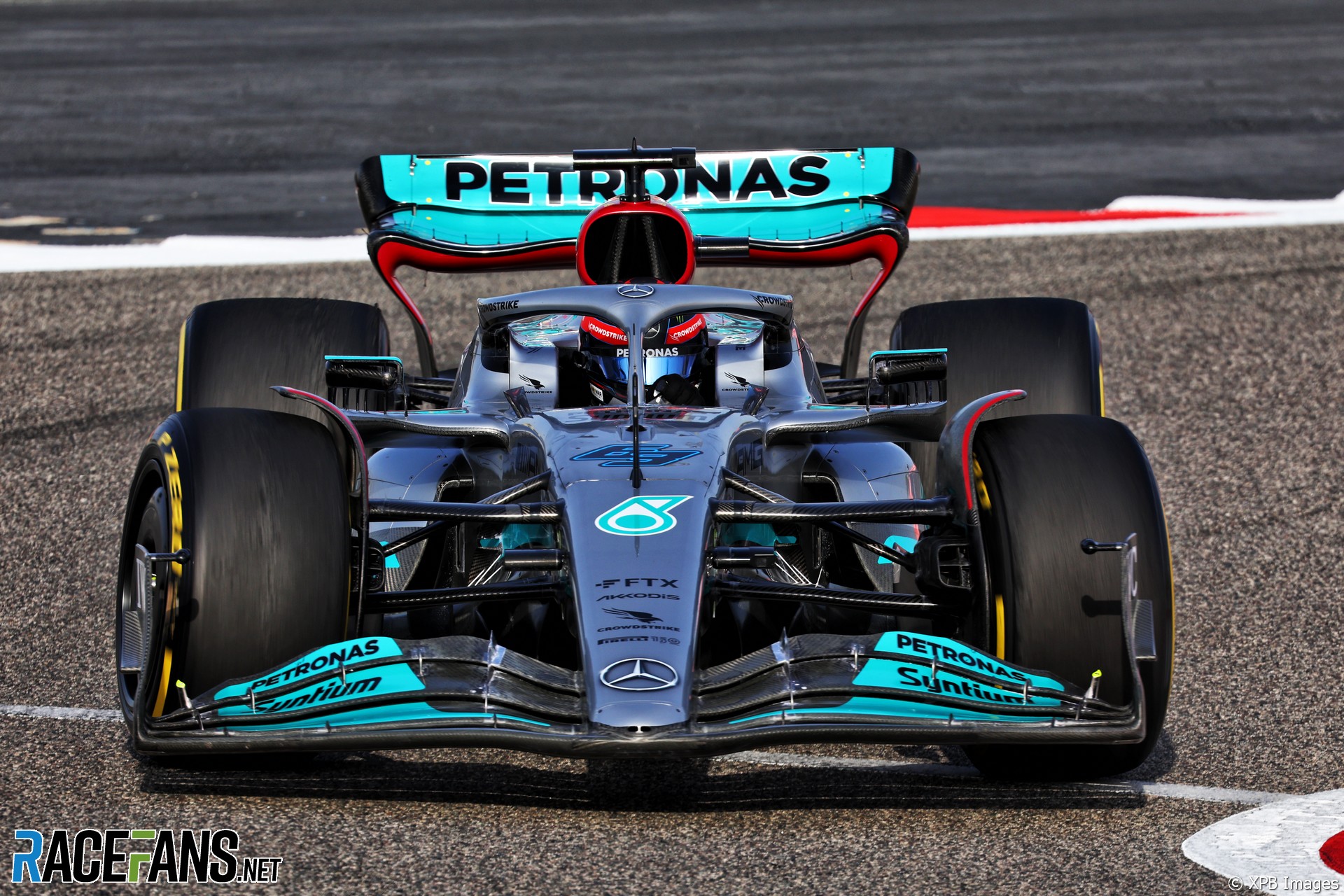 Section 13.5.1 only specifies that “the two side-impact structures must be fully enclosed by bodywork, and hence no part of them should be exposed to the external air stream.” Given that Mercedes has already provided the FIA with the CAD models and drawings, it seems that this shape is in compliance with the regulations too. Even Mercedes’ bitter rivals Red Bull acknowledged today that the design appears to be legal.

This radical new concept that Mercedes has opted for in their sidepod design all stems from their ability to package the cooling radiators so tightly into the chassis. This will be hard for other teams to replicate as Mercedes has likely designed the chassis with this in mind. 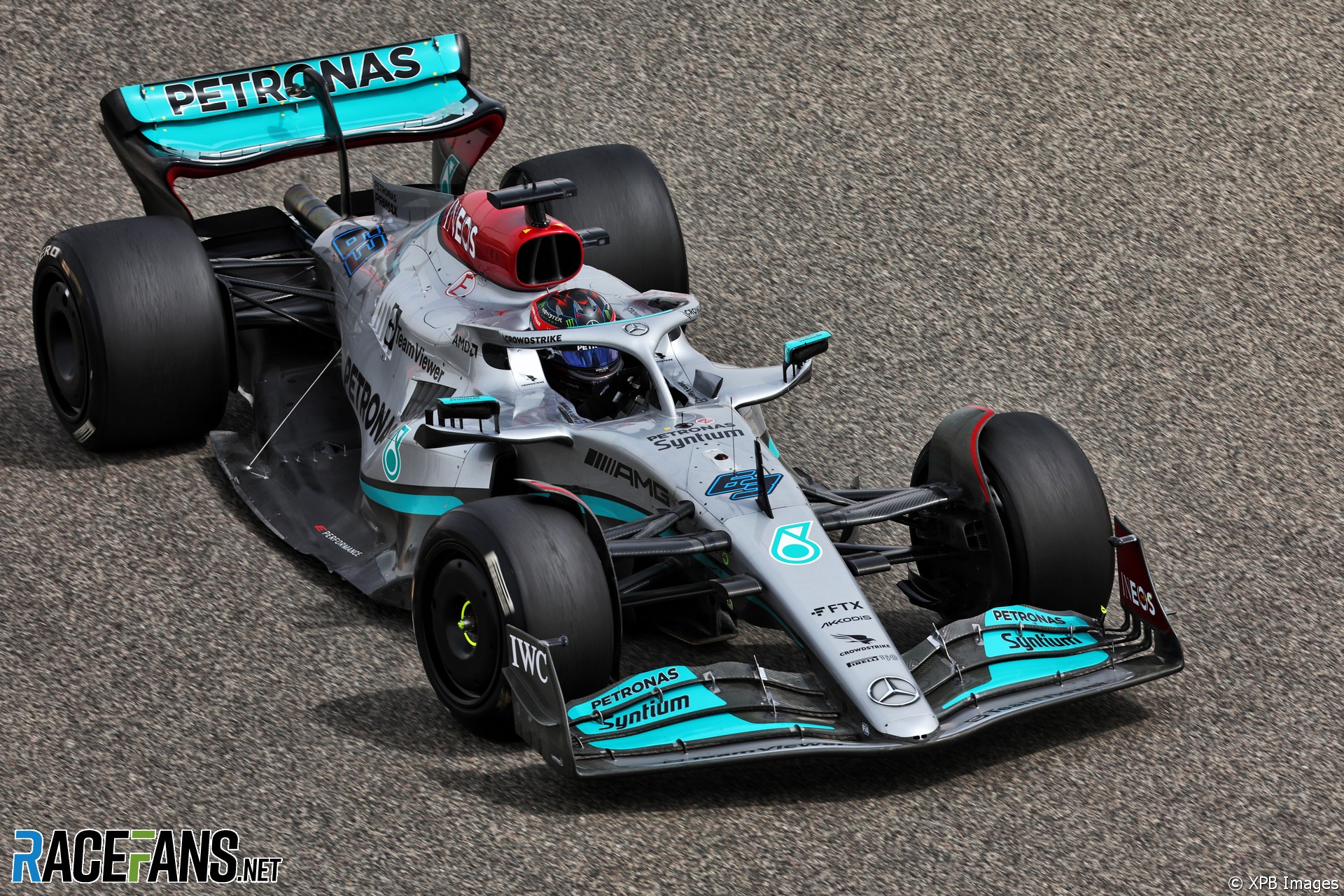 To replicate this, teams would have to completely redesign the monocoque, or at the very least this section of the monocoque and re-homologate their survival cell. It is unlikely for any team to be able to achieve this within the season.

Formula 1 technical director Pat Symonds gave some insight into how this has been done. He admitted Mercedes’ design was “a little bit more radical” than they expected teams would produce for F1’s new 2022 technical regulations based on the cooling demands they foresaw.

“On the Mercedes they have a few little tricks in there that help them in this respect. For example, the intercooler is a very, very neat device. It’s a water air intercooler, which of course Mercedes have had for a little while. But I think this is a little bit different and that’s why they can really shrink wrap this car a little bit more than most of the others can.”

“People are doing this sort of air-breathing rocket motor and this sort of spin-off from that has been this really extremely efficient heat exchanger technology,” Symonds added, “and I think that’s part of the reason why they’ve been able to produce the car the way they have.”

Mercedes has combined their creative interpretation of the regulations with their edge in cooling packaging to create their slimline sidepods. It remains to be seen whether this concept will yield a large advantage but it is refreshing to see a new concept and, importantly, to see the constructors’ champions continue to push the boundaries of the sport.

26 comments on “Analysis: Mercedes’ slimline sidepods and the “rocket” technology behind them”