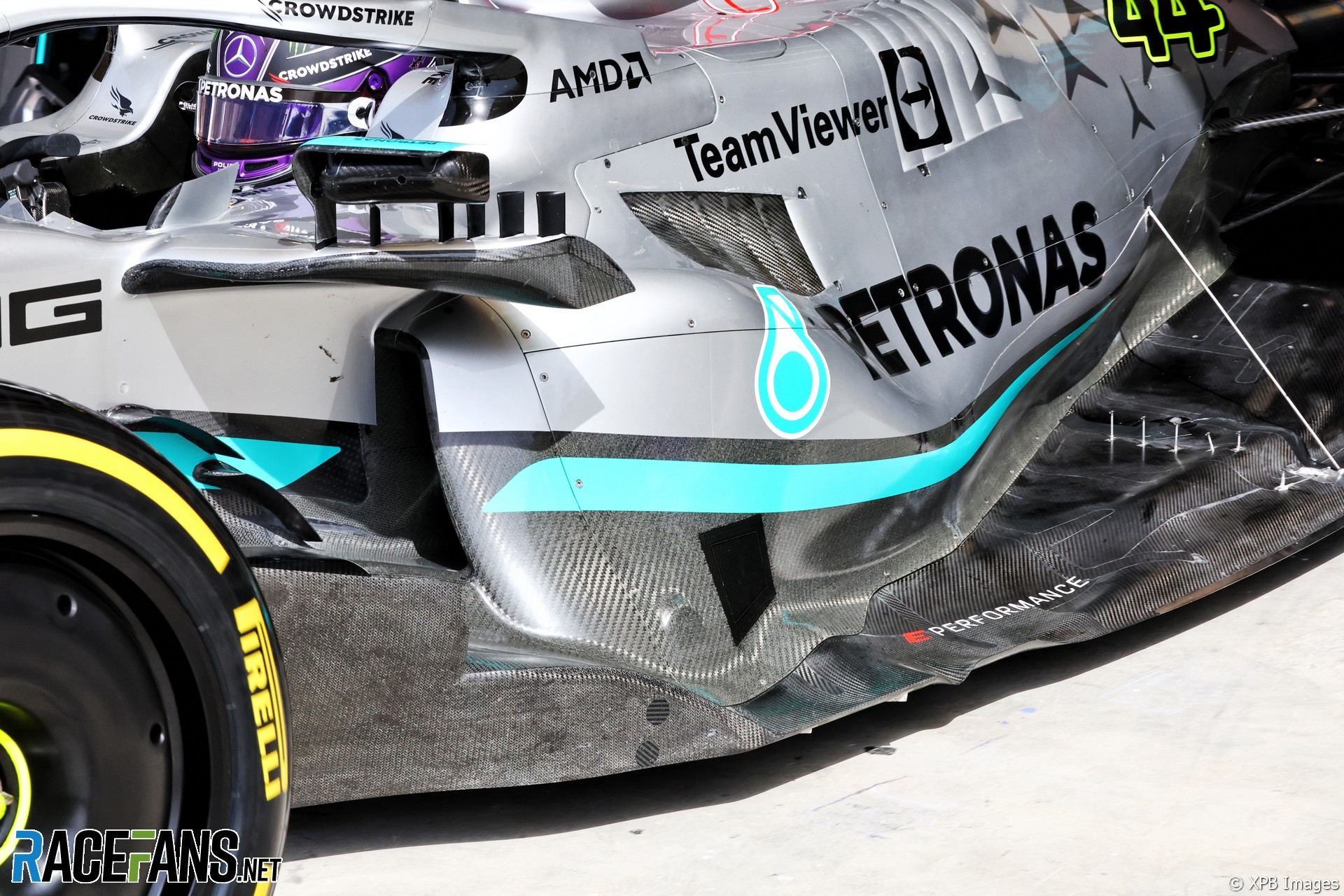 Mercedes surprised the paddock when it revealed a dramatic new sidepod design for the second pre-season test one week ago today.

While the aerodynamic benefits of the shrunken sidepods have attracted much comment, the key technology differentiator in their design appears to lie in the cooling of the car. Novel heat transfer technology developed in the aerospace industry may be the key that has unlocked this opportunity for Mercedes to shrink wrap their car tighter than most on the grid.

During the test Formula 1’s chief technology officer Pat Symonds referred to a company he believes Mercedes have worked with on the development of their intercooler.

“The intercooler I think comes from Reaction Engines in Oxfordshire, people who are doing this sort of air-breathing rocket motor. The spin-off from that has been this really, extremely efficient heat exchanger technology and I think that’s part of the reason why they’ve been able to produce the car the way they have.”

Mercedes encountered problems with cooling in the past, notably at the Austrian Grand Prix in 2019. Their subsequent development path appears to have led them to some cutting-edge solutions.

How to keep a Formula 1 car cool

The ultimate goal in Formula 1 is to be the fastest car and finish the race first. In order to have the quickest time on the board, the teams have to balance four key factors: power, grip, drag, and weight.

There are several key components that must be cooled in an F1 car. These include the inlet air after being compressed by the turbocharger (also known as ‘charge air’), the hybrid system, V6 engine and various low voltage electronics (such as the ECU).

The majority of the powertrain systems such as the electric motors (MGU-K and MGU-H), inverters, ERS high-voltage battery pack, and the internal combustion engine use liquid cooling. The coolant moves the heat away from the hot powertrain components and flows through the channels of a radiator, gets cooled by the air passing through, and is returned to the components.

The cooler the powertrain components can be kept, the hotter they can run and for longer, improving performance and reliability. This cooling system is conceptually the same as what you would find in a standard road car.

The only medium that is cooled to gain direct performance is the charge air being fed to the engine. While compressing the air using the turbocharger makes it denser for combustion, it also raises its temperature. As inlet temperature is critical to performance in an engine, the charge air is passed through a heat exchanger called an intercooler.

Another type of intercooler is an ‘air to water’ intercooler. In this case, the same hot compressed intake goes into the intercooler but is cooled by water. The water is then cooled by a secondary radiator by ambient air.

This design has trade-offs. On one hand, the intercooler is less affected by vehicle speed as the water can retain heat and act as a ‘capacitor’ of heat for a short period of time. This is especially helpful at race starts where you have a relatively slow formation lap and sit on the grid for a few minutes.

A normal ‘air to air’ intercooler would get very little cooling as the car is not moving on the grid and F1 cars do not have fans on intercoolers or radiators. But on the other hand, this ‘air to water’ system requires a secondary cooling loop to cool the water resulting in a more complex design and additional weight.

The optimisation of cooling on a car is a balancing act between ideal operating temperatures of components, the aerodynamic drag, and the weight of the design. This is especially difficult on a racing car as vehicle speed fluctuates greatly around a circuit and the cooling design must work for the hottest tracks in the summer heat but also be light enough to not carry too large a weight penalty on the cooler tracks. Furthermore, the system must be able to cope with hard acceleration cycles where heat is generated very quickly and also perform while following other vehicles where airflow is reduced.

To optimise cooling, engineers have several dimensions to play around with such as the radiator surface area, fin spacing, tube diameter, expansion ratio, flow rate, and the number of coolant passes. All these different design parameters affect key characteristics of the radiators, namely drag and heat rejection. The goal of this optimisation exercise is to find the lowest drag while maintaining an acceptable amount of heat rejection in all different types of operating conditions.

Depending on the design of the radiator, this efficiency can also fluctuate with the temperature difference between the hot and cold fluids, the speed of the air being passed through the radiator, and the flow rate of the coolant. Novel materials, new cooling channel and fin designs, and pioneering manufacturing methods are all ways that engineers are trying to achieve maximum efficiency and maintain high efficiencies across a wide operating range.

Brand new sectors in the aerospace market such as hydrogen propulsion, supersonic passenger flight, and electric vertical take-off and landing are currently pushing the boundaries of cooling technology. In aerospace, like motorsport, it is critical to have lightweight, aerodynamic, reliable and durable design solutions. Reaction Engines is one company making headlines with its cooling technology.

Reaction Engines was founded in 1989 by three propulsion engineers from Rolls-Royce to design and build SABRE, a Synergetic Air-Breathing Rocket Engine. This engine under development aims to propel an aircraft from zero to five times the speed of sound atmospheric flight – and up to Mach 25 for space – with a single stage.

To achieve this, Reaction Engines have developed an innovative high-efficiency pre-cooler that takes the hot, ram-compressed air at temperatures that would melt the engine, and supercool it down to feed the rocket combustion chamber where it is ignited along with stored liquid hydrogen.

In 2019 the team successfully tested this pre-cooler technology and were able to quench (rapidly cool) air from 1,000C to engine inlet temperatures in 0.05 seconds. Reaction Engines have spun this innovative technology off and set up an Applied Technologies department to “apply our thermal management expertise to a range of industries” including motorsport. Such leaps in heat exchanger efficiencies would be an enormous benefit to Formula 1 teams for their cooling designs.

Other companies such as HiETA Technologies make use of advanced additive manufacturing (metal 3D printing) capabilities to design unique, lightweight and efficient heat exchangers. Additive manufacturing allows for innovative designs which could not be produced using traditional machining or casting methods. One of their innovative applications is a water charge air cooler. HiETA claims that their “charge air cooler is a single-component part that can provide a temperature decrease of up to 150°C by using two stages of cooling”. Such a lightweight and efficient solution would be very appealing to the likes of Formula 1 teams and power unit manufacturers.

Mercedes’ ‘not so new’ bold design

The new Mercedes W13 that showed up in Bahrain with little to no sidepods is a culmination of years of development. It is no secret that Mercedes has been moving all their cooling towards the middle of their car with their sidepods getting narrower and narrower and the rear half of the chassis becoming tighter over the years.

This year’s sidepods are definitely a big step in this direction, but is not something that has been achieved overnight. A design like this requires tight integration of the chassis, the power unit, aero package and, most importantly, cooling.

AlphaTauri technical director Jody Egginton suspects Mercedes have found a “very novel” new cooling technique. “It might be that their solution, combined with their PU [power unit] operating condition requirements, means that they could come up with a very novel and refined solution. So that could lead them to have a bit more freedom in terms of how they’re distributing their cooling centreline to sidepods.

“Every team is trying to package their cooling as best they can. But I’m sure it’s a conscious decision on the side of Mercedes to package in such a way to give them that freedom.”

Egginton’s team uses a Honda-developed Red Bull power unit which has a different cooling package. “We’ve got our approach to the cooling and we’re obviously with the same power unit we’ve had for a number of years now. We’re pretty confident that it’s a tight packaging solution, but it is very likely that we’re using different technologies to different PU manufacturers. This means that our distribution of cooling and the way the technologies are being used are different.”

Mercedes will of course be at pains to prevent the finer details of their system emerging. But the other significant unanswered question is what performance gains the sidepods deliver. After testing, Mercedes insisted they are not in as competitive a shape as Red Bull or Ferrari heading into the new season, claims which were greeted with scepticism by their rivals.

44 comments on “What is the rocket-derived technology hidden inside Mercedes’ extraordinary sidepods?”