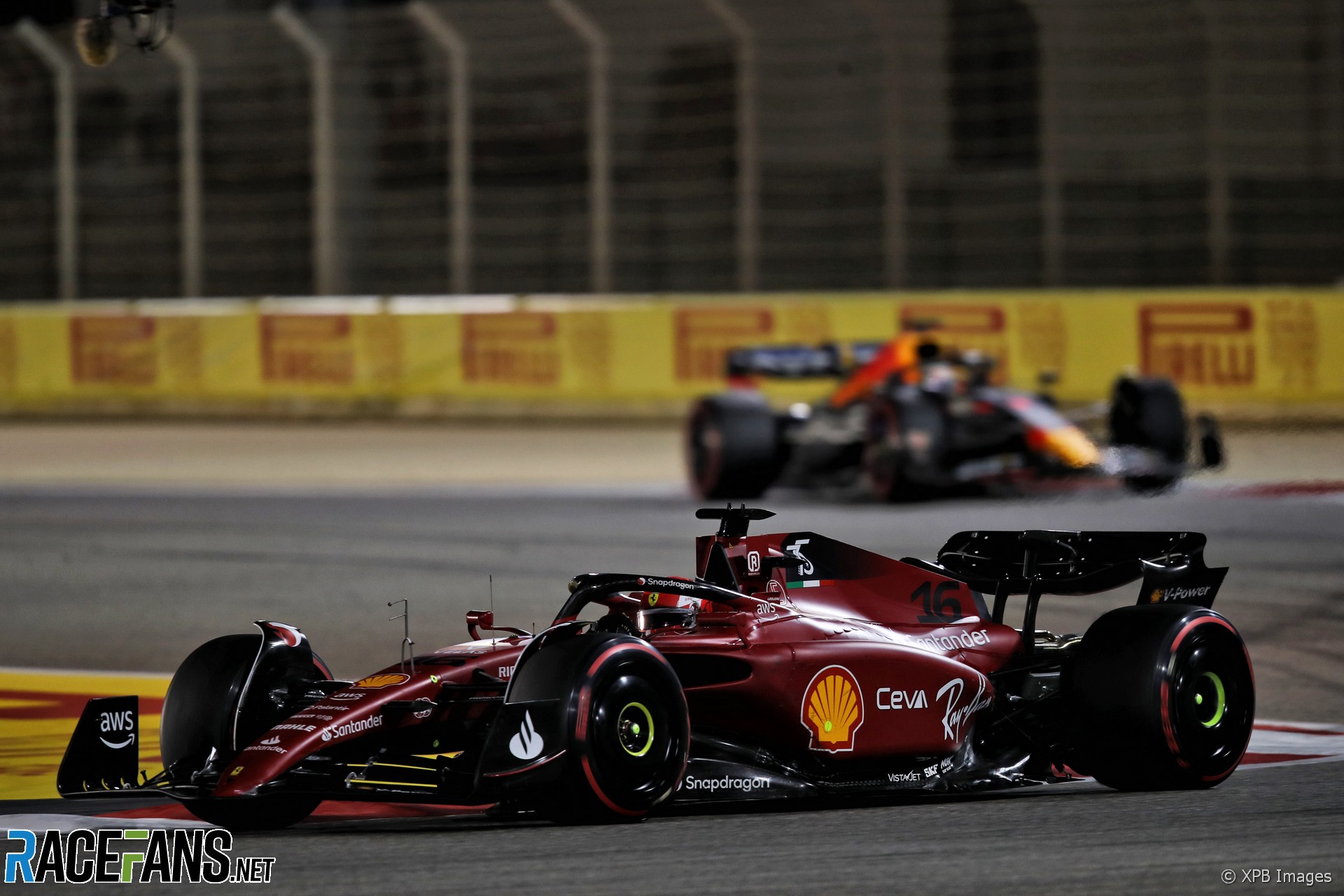 Having started from pole, Leclerc held his lead at the start and fended off Verstappen’s fierce challenges until the Red Bull driver suddenly slowed with a handful of laps remaining. Sainz inherited second place, while Perez retired on the final lap after his engine cut out, handing the final podium place to Lewis Hamilton.

When the lights went out, Leclerc fended off Verstappen’s advances on the run to turn one and held onto the lead, with Sainz remaining in third. Perez lost out to both Hamilton and Kevin Magnussen and dropped down to sixth on the opening lap, while Esteban Ocon hit Mick Schumacher at turn six, pitching the Haas into a full 360-degree spin, from which he was able to recover and continue.

Magnussen lost fifth place to Perez after a mistake under braking for turn one, before then losing another position just a few laps later when another mistake into turn one cost him sixth to George Russell.

At the front, Leclerc and Verstappen began pulling a gap to Sainz in third. On the tenth lap, Perez used DRS to breeze by Hamilton on the run to turn four and reclaim fourth place. Mercedes opted to bring Hamilton in for a switch to hard tyres a lap later, but Hamilton struggled to find grip on his outlap with his cold tyres and lost a place to Zhou Guanyu, before passing the Alfa Romeo back along the main straight.

Red Bull brought Verstappen in for his first stop at the end of lap 14, with Sainz following him behind. Both cars received a second set of soft tyres and Ferrari responded to Verstappen’s stop by immediately bringing Leclerc in.

Despite the three second gap before pitting, Verstappen found himself right behind the Ferrari when Leclerc rejoined the circuit. The pair engaged in a gripping, multi-lap duel, passing and repassing each other several times over the following laps, before Verstappen locked up his right front tyre under braking for turn one and dropped out of attack range of the Ferrari.

As Verstappen complained of engine braking problems on his Red Bull as well as loss of tyre grip, his gap to the leader grew to around four seconds before Red Bull pitted him for his second stop. Once again, he was able to cut seconds out of Leclerc’s lead and loom large in the Ferrari’s mirrors once the leader pitted, but he was unable to get close enough to challenge Leclerc once again.

Leclerc began to pull gradually away from the chasing Verstappen, before the Red Bull suddenly pitted for a third time to switch from the medium tyres onto a third set of softs. Ferrari reacted by bringing in Sainz from the second place he had inherited from Verstappen, but then the Safety Car was called as Pierre Gasly pulled his AlphaTauri off the circuit with flames licking from the rear of the car.

Ferrari pitted Leclerc under Safety Car, meaning the race would be determined by a seven lap sprint to the chequered flag with almost the entire field now on new soft tyres. At the restart, Verstappen could not get close enough to challenge Leclerc and instead was forced to defend his second place from Sainz behind.

But then with just a handful of laps remaining, Verstappen began complaining of battery problems and was passed by Sainz on the run to turn 11. Then the Red Bull slowed on the exit of turn 13 and Verstappen was forced to pull into the pits. Perez was then tasked with defending the final podium place from Hamilton, but his own Red Bull engine seized at the first corner, causing him to spin into retirement.

Magnussen secured fifth for Haas and their first points since 2020, ahead of Valtteri Bottas in sixth in his first race for Alfa Romeo. Esteban Ocon took seventh ahead of Yuki Tsunoda, with Fernando Alonso ninth and rookie Zhou Guanyu scoring a point on debut in tenth.