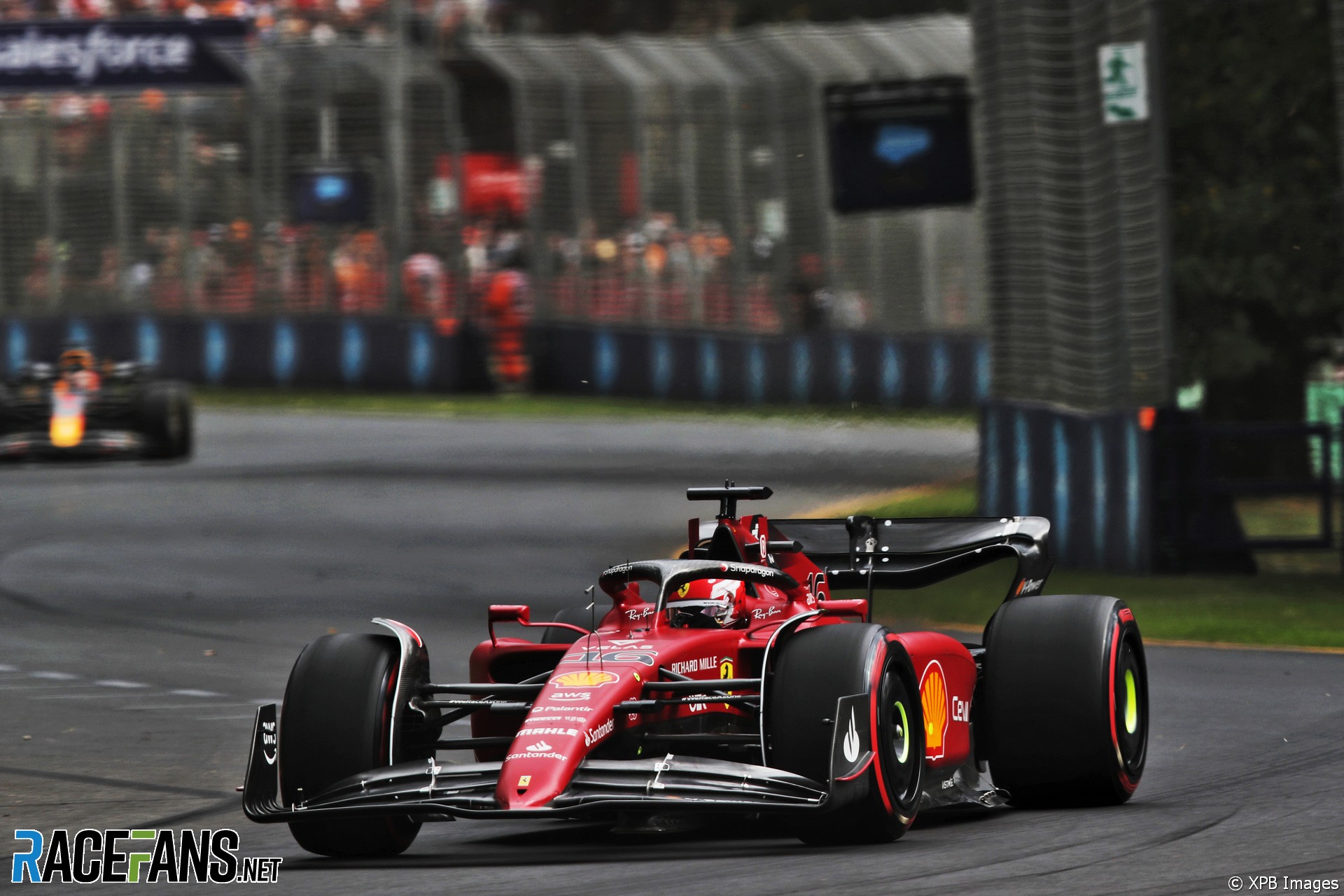 Charles Leclerc took his second pole of the season in Australia after denying Max Verstappen with his final effort in qualifying.

Leclerc’s best time of a 1’17.868 was enough to secure pole by almost three tenths of a second ahead of Verstappen. Sergio Perez took a provisional third place, but is under investigation for allegedly failing to slow under yellow flags in Q2. Carlos Sainz Jnr will start ninth on the grid after a red flag cancelled his first Q3 time and he made a mistake in his only timed lap.

The skies around the Albert Park circuit had turned overcast by the time the green light at the pitlane signalled the start of the first qualifying session in Melbourne for three years.

Carlos Sainz Jnr set the early pace with a 1’19.179, ahead of Sergio Perez, Charles Leclerc and Max Verstappen. Then Leclerc went quickest by breaking into the 1’18s, with Verstappen improving to go within half a tenth of the Ferrari.

Nicholas Latifi almost hit the wall on the exit of turn 11 after losing control of his Williams through the 90 degree right-hander, but was able to avoid hitting the barriers.

Mercedes went out late in the session for their first flying laps, with Lewis Hamilton going eighth quickest, just four thousandths of a second ahead of team mate George Russell.

After both Aston Martin drivers crashed out in the morning practice session, Lance Stroll was eventually able to take to the track in the final five minutes, while Sebastian Vettel’s car remained under work in the garage. Then, the session was brought to a halt as Stroll and Latifi collided on the exit of turn five, sending the Williams spinning into the barrier and causing the red flags to be immediately flown. The stewards will investigate the collision after the session.

Vettel did get to start a lap, but his effort was only enough to see him go 18th. Alex Albon failed to reach Q2 and was eliminated in 16th, which means he will start no higher than 19th after his three-place grid penalty for colliding with Stroll in Jeddah.

Kevin Magnussen was eliminated from Q1 for the first time this season in 17th, ahead of Vettel and Latifi in 19th. Having failed to set a lap time, Stroll was 20th and last in the standings.

Before the session, Alex Albon was told to stop his Williams on the circuit at the end of Q1 due to a technical concern over his car. He pulled off after turn 12 and the start of Q2 was delayed by five minutes while the Williams was recovered.

When the session got underway, Red Bull set the initial benchmark with Perez setting the fastest time with a 1’18.340, a quarter of a second ahead of Verstappen on the soft tyres.

George Russell brought out the yellow flags at turn 11 after catching the grass under braking for the corner and taking to the escape road. Perez passed the incident but was later announced to be under investigation by the stewards for failing to respect yellow flags caused by the Mercedes. The investigation will be conducted after qualifying.

Lewis Hamilton passed a slow Max Verstappen on one of his push laps on the approach to turn six, with the Mercedes only just missing the Red Bull at high speed, but thankfully the pair avoided contact.

In the final moments, Hamilton was on the bubble of elimination in tenth place, however Pierre Gasly could not find enough speed to each Q3 and was knocked out in 11th as the chequered flag flew.

Valtteri Bottas could not improve his time by enough to reach the top ten, meaning he would miss Q3 for the first time since the 2016 Abu Dhabi Grand Prix. Yuki Tsunoda was eliminated in 13th, ahead of Zhou Guanyu in the second Alfa Romeo. Mick Schumacher was the last driver out in 15th position.

The battle for pole position appeared to be the most open of the season so far, with both Ferrari and Red Bull drivers looking like they had the pace to compete for the prime starting position for tomorrow’s race.

The Red Bull drivers took to the circuit first, with Verstappen ahead of team mate Perez. Verstappen put together a decent lap but made a slight mistake under braking for turn 13, causing him to lose approximately three tenths of a second. Verstappen took provisional pole with a 1’18.399, but was beaten by just 0.001s by Perez on his first timed effort.

Ferrari waited until after the Red Bulls had set their first laps to send their drivers out, with Leclerc sent out ahead of Sainz. Leclerc took provisional pole with a 1’18.239, to go a tenth-and-a-half faster than Verstappen. Sainz had completed his lap and was just about to cross the line, but before he could the red flag was shown, immediately halting the session.

The cause of the stoppage was Fernando Alonso’s Alpine, which had crashed into the barriers on the exit of turn 11. Replays showed that the Alpine appeared to switch off under braking for the corner, robbing Alonso of the engine braking he relied on to slow the car down and sending him into the barriers. There was another delay while the Alpine was recovered, with just under seven minutes of track time remaining in the session.

Once qualifying resumed for the final time, only the Mercedes pair of Hamilton and Russell and the Red Bull of Perez ventured out on the circuit. The Mercedes opted for two warm up laps before pushing, while Perez immediately went for a hot lap.

Perez’s effort was only 0.001s slower than Leclerc’s provisional pole time, putting him into second place with just under three minutes remaining. Hamilton went sixth fastest on his first push lap, behind Ricciardo, while Russell’s first effort was good enough to put him provisionally fourth, with Sainz the only driver remaining yet to set a time.

Verstappen’s final lap was good enough to see him take provisional pole by just under a tenth, but Leclerc still had one final lap to go and took full advantage, putting in the first 1’17 of the weekend to take pole position by over two tenths.

Having been robbed of his first timed lap, Sainz had only one lap to decide his grid position, but a mistake in the turn nine-10 chicane saw him run wide on the exit of the turn and cost him over a second, meaning he will line up only ninth on the grid.

Sainz’s error meant Lando Norris was able to take advantage and claim fourth on the grid, with Hamilton improving at the chequered flag to take fifth, one tenth faster than team mate Russell. Daniel Ricciardo will start his home grand prix from seventh, ahead of Esteban Ocon, Sainz and Alonso following his car-induced crash.