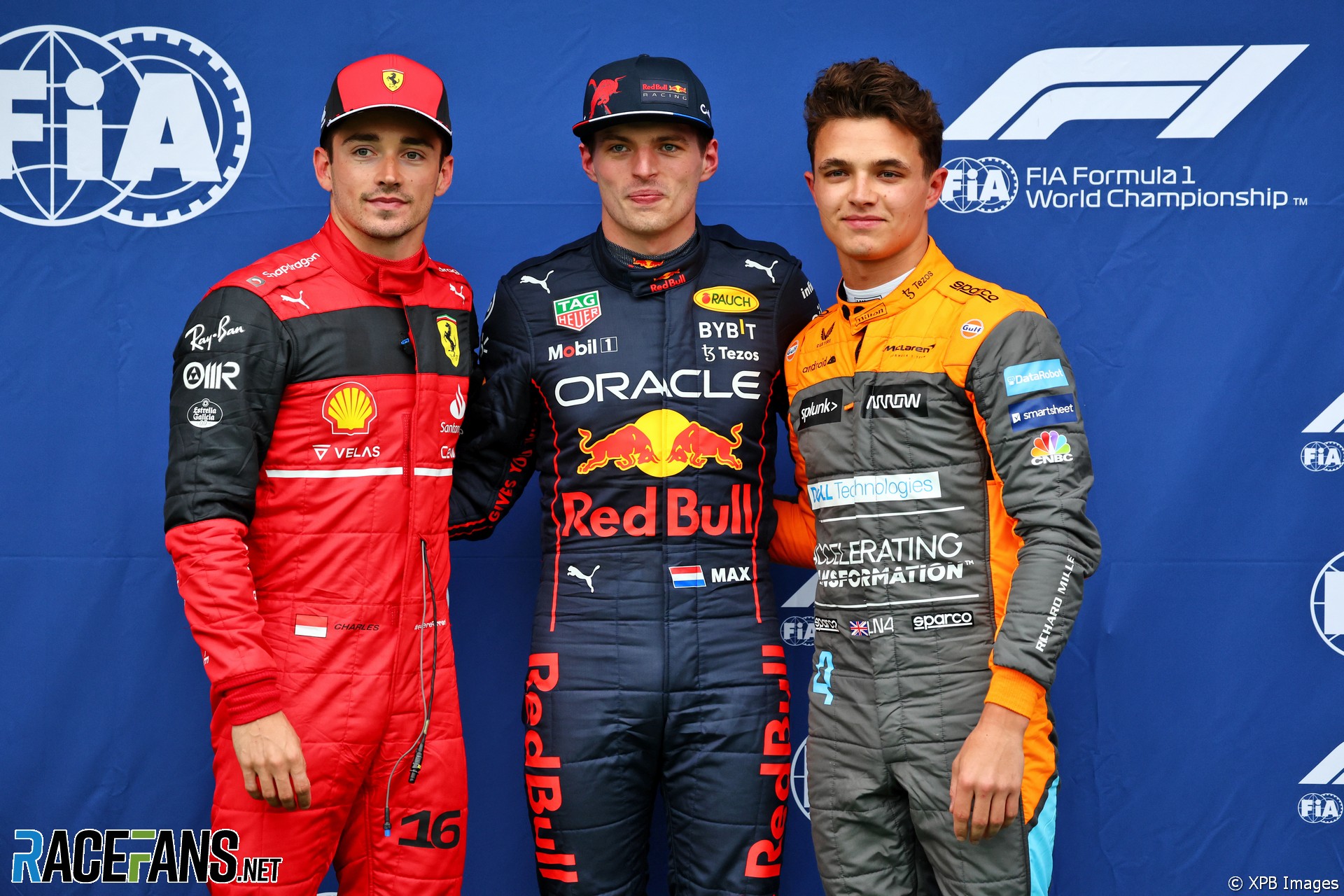 The world champion set what turned out to be his quickest time under yellow flags when passing Valtteri Bottas’ stricken Alfa Romeo in the final sector, but clearly backed off while passing the scene of the danger before setting his time.

Championship leader Charles Leclerc will start alongside Verstappen on the front row of the grid for the sprint race, ahead of Lando Norris in third and Kevin Magnussen in fourth.

Carlos Sainz Jnr will start the sprint race no higher than 10th after crashing in Q2, while both Mercedes of George Russell and Lewis Hamilton will start from 11th and 13th, respectively.

The circuit was still damp as qualifying got underway around Imola, with many drivers choosing to play safe by taking to the track on intermediate tyres.

Quickly, it became clear that a true dry line was beginning to form, with Lewis Hamilton choosing to pit and switch onto the soft compound dry tyres. Lance Stroll had already made the transition in the Aston Martin, and used them to set the fastest time of the session, comfortably quicker than those using intermediates.

Alex Albon’s Williams suddenly began smoking with a large fire on his right-rear wheel. The brakes appeared to have ignited on Albon’s car, similar to a problem that had befallen his team mate Nicholas Latifi in the Bahrain pre-season test. A small explosion from the rear of the Williams showered the circuit with debris on the approach to the Variante Alta chicane, leading to the session being stopped for several minutes as the track was cleared.

Once the session restarted, times began to tumble. Carlos Sainz Jnr put Ferrari fastest of all, ahead of team mate Charles Leclerc, before Max Verstappen split the two Ferraris. Mick Schumacher almost lost control of his Haas out of the Variante Alta chicane, while Nicholas Latifi had a half-spin exiting the Villeneuve Chicane.

In the closing minutes, Lewis Hamilton was at risk of elimination in 16th with the track continuing to improve. Hamilton was able to jump up into safety, but as his rivals improved, Hamilton found himself back in the drop zone once more alongside team mate George Russell.

However, both Mercedes drivers managed to set their best times as the chequered flag flew, jumping back into safety at the expense of the two AlphaTauri drivers, Yuki Tsunoda and Pierre Gasly, who were the first drivers eliminated, with Hamilton squeaking through by just 0.004s.

Nicholas Latifi was knocked out in 18th, with Esteban Ocon eliminated in 19th after being sat in the garage in the closing minutes of the session, his team informing him of a braking issue on his Alpine. Albon ended the session 20th and last after his own brake failure in the Williams.

As the second session of qualifying began, Sainz was told that “rain is coming”, with Ferrari sending him out urgently to try and secure a soft tyre lap wand take no risks with any potential rain. He clocked a 1’18.9 to set the early benchmark, until it was beaten by Verstappen by almost two tenths.

But as Sainz tried to improve on his first effort, he lost control of his Ferrari coming into the second Rivazza, looping the car around and skidding backwards into the barriers, breaking the left-front wheel off the car and ending his session. The red flag was immediately flown, stopping the session with just under 11 minutes remaining.

As the Ferrari was cleared, rain began to fall in the pit lane as umbrellas began to rise in the grandstands around the circuit. Both Mercedes of Russell and Hamilton were sat in the drop zone at this stage, in 11th and 13th, respectively, while Schumacher, 12th, Zhou Guanyu, 14th, and Lance Stroll in 15th all faced the likely prospect of being unable to improve their times for the remainder of the session.

When the green flag resumed the session, none of the 15 remaining drivers chose to take to the track as the minutes gradually ticked away. In the final minutes, a handful of drivers chose to venture back out on the now wet circuit, seemingly to just gather more data on the intermediate tyres.

Naturally, no one improved for the rest of the session, confirming that those five drivers who had been in the drop zone at the red flag would be doomed to be eliminated from the session. Russell and Schumacher, Hamilton, Zhou and Stroll were therefore knocked out, while Sainz progressed through to Q3 by virtue of his earlier time, despite not taking any further part in qualifying.

The rain had stopped falling as the final qualifying session began, but the damp surface still called for intermediate tyres at a minimum.

The session was stopped as it appeared at first that the Haas was beached. However, Magnussen had kept his engine running and managed to slowly pull his car onto the access road on the perimeter of the gravel trap and drive over the gravel and back onto the circuit.

After a short delay, the session resumed, with Magnussen heading back out onto the circuit behind Fernando Alonso. The Alpine driver almost lost control of his car at Acque Minerali on his first flying lap, but managed to avoid the gravel as Magnussen set the first representative lap time of the session.

Leclerc went quickest of all with Verstappen behind him. Verstappen set a purple first sector, but the yellow flags came out on the run down to Rivazza as Valtteri Bottas pulled off the circuit next to the barriers with an apparent problem on his Alfa Romeo. Verstappen passed the scene, audibly lifting under the yellow flags. But despite backing off, the Red Bull still set the quickest overall lap time, taking provisional pole as the red flags were shown for the fourth time.

After yet another delay, three minutes remained as Q3 restarted for a second time. Verstappen led Leclerc out of the pit lane, with the pair aiming to try and get two timed laps in before time expired. The rain seemed to have increased since the latest red flag, with Verstappen complaining of a lack of grip on his intermediate tyres.

As Verstappen tried to improve on his provisional pole time, Norris spun at Acque Minerali, bouncing into the tyre barrier and causing a fifth red flag of the session, which brought qualifying to an end. That secured Verstappen pole position for Saturday’s sprint race, with Leclerc second on the grid. Despite ending the session with his off, Norris took third position in his McLaren.

Magnussen will join Norris on the second row, with Alonso fifth for Alpine. Ricciardo will start the sprint from sixth, with Sergio Perez seventh. Bottas and Sebastian Vettel will start from eighth and ninth, while Sainz will start no higher than tenth.