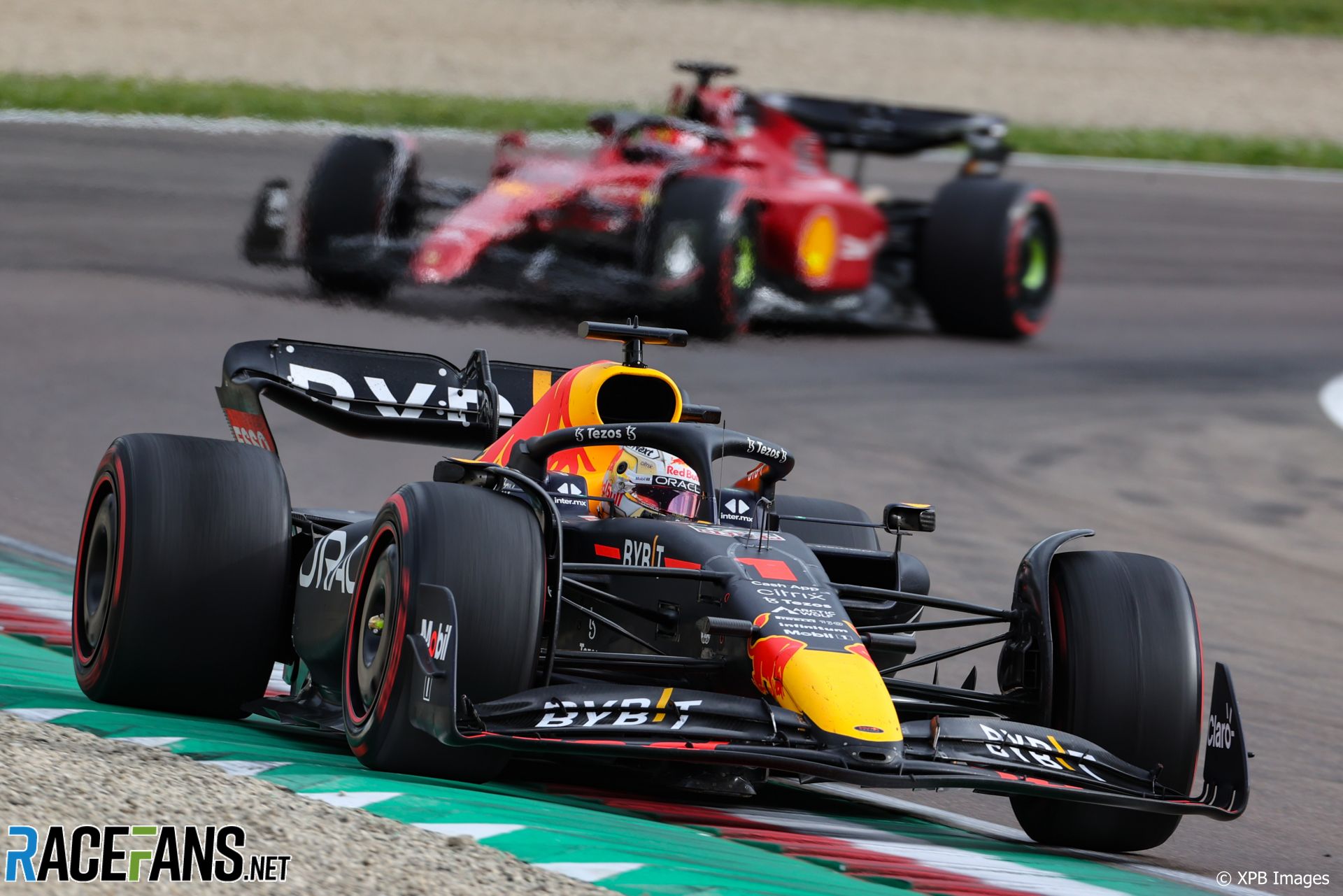 After a Friday in which Formula 1 teams learned next to nothing about how their cars would perform around the Imola circuit in the dry, Saturday gave them a 21-lap dress rehearsal for the fourth round of the 2022 season.

The first sprint race of the year may have ended with the same front row confirmed for the Emilia-Romagna Grand Prix that had lined up on Saturday afternoon, but now both Max Verstappen and Charles Leclerc have clear ideas about the strengths of their cars and the kind of race they can expect to have on Sunday.

Having never been separated by more than 1.7 seconds over the 16 green flag laps prior to Verstappen’s sprint-winning overtake at Tamburello, it seems the pair are as closely matched around Imola as they have been at any of the opening three rounds up to this point. That was demonstrated after the Safety Car restart, where the pair both clocked up 14 consecutive racing laps in the 1’19s before Verstappen caught and challenged the Ferrari for the lead.

Leclerc’s race pace was a touch faster than Verstappen’s initially, but not as consistent as the Red Bull could manage. Verstappen stuck to his pace, logging lap after lap within the 1’19.2s, until he eventually began to reel in the Ferrari. In pushing Leclerc to keep him out of his DRS range, Verstappen managed to manifest some painful right-front tyre graining on the leader’s car.

“I think the pace is quite similar,” Leclerc said after the sprint race. “I tried to push at the beginning to get a bit of a gap and for Max not being the DRS zone, because I knew that I will have been vulnerable if it was the case. But I paid the price a little bit later on in the race and had some graining and really struggled in the last two, three laps.”

Ferrari now have a huge volume of meaningful data to sift through to figure out how to treat their tyres more kindly tomorrow. But there’s not much they can do with their car to help, save for some minor settings adjustments. Leclerc knows that if he beats Verstappen to the Tamburello Chicane a second time tomorrow, he will need to avoid falling into the same trap again.

“If we managed to cure that for tomorrow, I’m pretty sure that we’re in the fight for the win,” Leclerc said. “If not, it’s going to be a bit more difficult. But anything is possible for tomorrow, I think.”

Having caught and passed the Ferrari once already this weekend, Verstappen will be confident that he can do the same on Sunday if he finds himself behind Leclerc once more. However, the best way Verstappen can position himself for a second win of the season is by getting a much better start than he did in the sprint race, and here Red Bull have something to learn.

“My start was very, very poor,” Verstappen admitted. “Terrible. When I let the clutch go, just a lot of wheel spin and no traction.”

The dynamic for the grand prix has been shifted by both Sergio Perez and Carlos Sainz Jnr putting themselves firmly into the equation by securing second row starts. Having gradually caught Leclerc towards the end of the sprint race, Perez says he will be looking to attack the championship leader in the grand prix.

“I think there is some fine-tuning we can do for tomorrow and hopefully we are able to do it to be in the mix for the win, which is the target,” Perez said. “I got really close to Charles today near the end but it was just a sprint, so let’s what we can do over a race distance.”

But sprint racing on a single set of tyres is a vastly different scenario to a full 300km grand prix distance where more strategy comes into play. Pirelli predict that a one-stop strategy would be the most desirable approach, most likely starting on the medium tyres, in large part due to the 28-second time loss for pitting along the fast main Imola straight.

However, Saturday’s race showed that DRS is especially potent on the pit straight and overtaking may well now be easier at the Italian circuit than it has ever been for modern Formula 1 before. That could well open up the option for a two-stop, as track position can be gained back by using the superior grip to tuck up behind a rival before sailing past them in the DRS zone. And with the soft tyres showing that they will last one-third of the race distance, there may be many teams considering multiple stops more viably than they had prior to the weekend.

Behind the leaders, McLaren’s solid sprint race performance will have given the team a boost in confidence. But after Daniel Ricciardo and Lando Norris both had minimal running in second practice after mechanical problems, they are heading into somewhat of an unknown on Sunday.

“We’re still going into tomorrow probably not as prepared as some others,” Ricciardo admitted after the sprint race. “Maybe there’s still a little bit of a compromise tomorrow, but I think we learnt enough today to have confidence coming into the race tomorrow without any real hesitation or question marks”

Further down the field, Mercedes’ performance on Saturday made it clear they should expect the most difficult Sunday that the team have possibly faced in the last decade. Failing to improve on 11th and 13th on the grid in the sprint, the team may have to get creative just to be in with a chance of taking any points away from the weekend.

“Strategy is going to be key tomorrow,” said George Russell. “We’ll have to do something different to our competition that will give us opportunities to fight and move up the grid.

“It’s been a difficult weekend so far for us, tyre warm-up has been difficult, we need to get on top of things and capitalise on what is possible tomorrow.”

The only wildcard that may take everything the teams learned on Saturday and throw it directly into the nearby Santerno river is the weather. After a soaking wet Friday, Sunday was expected to be another dry day. However, the risk of rain over the circuit at its 3pm race start time has risen slightly.

While it’s still unlikely that the Emilia-Romagna Grand Prix will be the first rain-affected race of 2022, there is every chance that Red Bull and Ferrari will be locked together in their tightest battle of the new season so far over 63 laps of the Imola circuit.

Who will come out on top in Sunday’s grand prix? Will the Mercedes drivers make it into the points?

Share your views on the Emilia-Romagna Grand Prix in the comments.