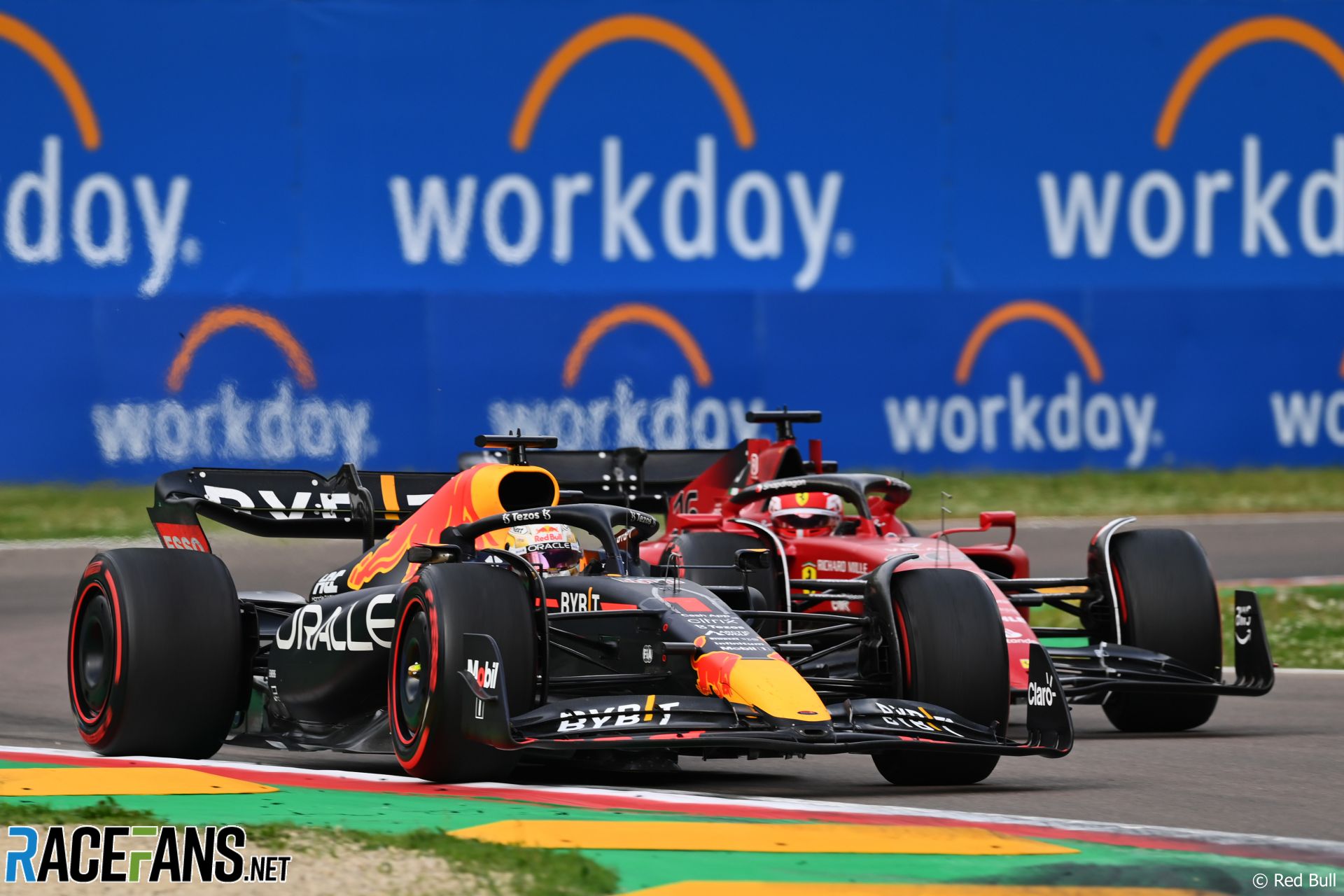 Max Verstappen won the sprint race and claimed pole position for the Emilia-Romagna Grand Prix after passing Charles Leclerc in the closing laps.

The Red Bull driver was passed by the championship leader off the line, but Verstappen managed to catch and pass the leading Ferrari in the final laps. Sergio Perez will line up third on the grid, ahead of Carlos Sainz Jnr who recovered from tenth to fourth.

The skies were overcast but the circuit was dry as the field lined up for the first race of the season, with Verstappen on pole and Leclerc alongside.

As the lights went out, Leclerc got a far better start than Verstappen, and was clear of the Red Bull by the time the field reached the Tamburello chicane. Lando Norris settled into third and Kevin Magnussen took fourth, the first driver on medium tyres behind soft-shod rivals.

Back in the pack, Pierre Gasly and Zhou Guanyu collided at Piratella, sending the Alfa Romeo into the inside wall, causing heavy damage to Zhou’s car. Gasly recovered to the pits with damage to his right-front wheel. The Safety Car was deployed as the Alfa Romeo was recovered, before the race restarted on the fifth lap.

Leclerc led Verstappen away at the restart, with Norris and Magnussen behind. Carlos Sainz Jnr passed Fernando Alonso for seventh before DRS was activated. Once it was, the zone was a scene of action almost every lap.

Sergio Perez was first to wield DRS along the main straight to take fourth place from Magnussen. Daniel Ricciardo also passed the Haas, while Perez soon caught and passed the other McLaren of Norris to take third place. Sainz moved past both McLarens to move up into fourth position, while Valtteri Bottas overtook Magnussen to move up to seventh.

Heading into the final laps, Verstappen had been sticking with Leclerc until he finally breached DRS range of the Ferrari and gained half a second along the main straight. Verstappen began to pressure his rival, eventually using DRS to draw alongside the leader on the main straight and sweep through into the lead at Tamburello.

Once passed by the Red Bull, Leclerc was not able to counter attack and was forced to settle for second place as Verstappen crossed the line to secure the eight points for victory and pole position for Sunday’s Grand Prix. Perez finished four seconds adrift in third, comfortably clear of Sainz in fourth. The two McLarens of Norris and Ricciardo will start from fifth and sixth tomorrow, ahead of Bottas and Magnussen, who took the final point available in eighth.

Alonso will start ninth for Alpine, with Mick Schumacher securing his best-ever grid position in tenth. George Russell could not improve on his starting position and will line up 11th, ahead of Yuki Tsunoda, Sebastian Vettel and Lewis Hamilton in 14th in the second Mercedes.