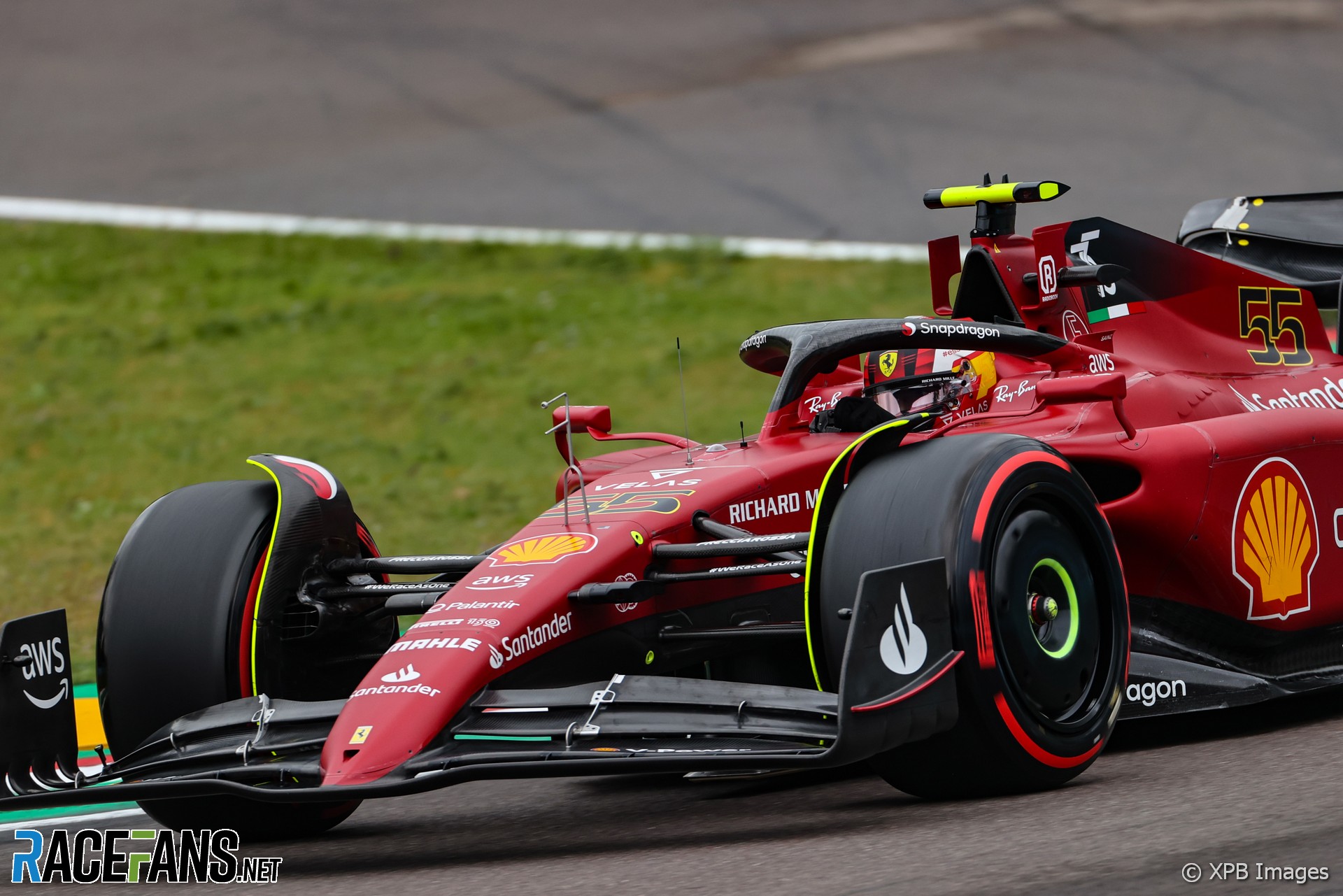 The unusual sprint race weekend schedule was challenging already for teams and drivers, with only a single hour of practice available before having to run flat out in qualifying. But the wet start to the Emilia-Romagna Grand Prix has only made matters far more difficult.

From the moment the cars ventured out onto the track at the start of Q1, parc ferme rules came into effect for the following two-and-a-half days of the event, meaning there is no opportunity to add downforce, remove it, or change the specification of any of the parts on the teams’ machines. For better or worse, all 20 drivers are now locked in to their set-ups for the rest of the weekend without having had any truly representative running on dry tyres.

That makes judging the strengths of the various teams after Friday’s running all the more difficult – especially given that both Q2 and Q3 were heavily disrupted by red flags, denying the majority of the field the opportunity to improve their times. Their grid positions were strongly influenced by the positions they happened to be in when the sessions were stopped.

Usually, the second practice session on a Saturday morning during sprint weekends is the least meaningful session of the weekend, with teams only able to correlate data from Friday or test out various tyre compounds over longer runs. But second practice this weekend will likely be a busy affair, as teams scramble to gather as much meaningful data on the three dry compounds before the two races round off the weekend.

What Friday did offer, however, is an insight into how the new 18-inch wet Pirelli tyres behave and how the ten teams’ cars for 2022 handle wet conditions. Based on the data they gathered today, Pirelli’s Mario Isola was happy with how the tyre supplier’s new wet compounds handled their first true run out in 2022.

“This was the first real test for us of the new 18-inch wet and intermediate tyres, which have never been tried out before in conditions that were as cold as today, so that was valuable information in the bank,” Isola said.

“What we’re still missing is data on dry running, so we’ll see what tomorrow brings.”

Despite missing out on pole with Charles Leclerc by only one place, Ferrari appear confident that they can fight Verstappen and Red Bull over the two races this weekend and pleased that their car appears to retain its impressive performance in wet conditions.

“A positive aspect today was that the car was also competitive on both wet weather tyre compounds,” said the team’s sporting director, Laurent Mekies.

“Unfortunately, today, what made the difference was the timing of the red flags. If the fourth had come out a few seconds earlier, then pole would have gone to Charles, but that wasn’t to be.”

Missing opportunities is frustrating at the best of times in Formula 1, but especially punishing at Imola, a circuit that has traditionally proven difficult to pass at, although helped since its return to the calendar in 2020 by the revised pit straight and the DRS zone. With a dry day expected for tomorrow, the sprint race offers a major test of the new ground effect regulations which were designed to allow cars to follow more closely.

One driver who will go to bed more thankful for the revised technical regulations than ever before is Carlos Sainz Jnr, who endured his second successive qualifying disaster by crashing at the Rivazza in Q2, dooming him to start no higher than tenth on Saturday.

But facing what would be a crushing disappointment most other weekends, Sainz at least has 21 laps to put himself back in position to score major points on Sunday. To do that, he needs to demonstrate a little more patience than he did after his poor start in Melbourne last time out.

Even further back than Sainz, the two Mercedes drivers face the team’s worst combined starting positions in a decade, if they are unable to make substantial progress over the sprint race from 11th for George Russell and 13th for Lewis Hamilton. The cold, wet conditions exposed the W13’s slow tyre warm-up. Russell is not convinced Saturday’s 21-lapper is long enough to be able to put themselves in a much better position for Sunday.

“The sprint race will be interesting with these new cars as we can follow a bit closer, but I don’t think there’s enough laps with enough degradation for us to use our advantage there compared to our current rivals,” Russell said.

With the likes of Mercedes and Sainz further down the order, there is a great chance for those in the upper midfield to not only secure a strong starting position for Sunday, but some very useful extra points for the constructors’ championship also. Kevin Magnussen finds himself in fourth on the grid, but as well as recognising the wisdom in playing it safe and securing a bonus points haul, Magnussen has temptations to go for more on Saturday.

“I want to start in a good position for the Sunday race,” said Magnussen. “I don’t think we’re fast enough to be P4, but it’s a tricky track try to overtake, so if I can get around the first lap in P4, that’s going to be superb.

“I feel like I want to push. I’m so close to the top now – you can win from P4, but we’re not fast enough to do that. I think we can win a different battle. We’ve got to remember what we’re what we’re trying to do.”

Even if Magnussen and Haas do secure a stunning result in the sprint, it will only count for so much before the main event on Sunday. While the sprint races were brought in to spice up the show, there’s a real risk that Saturday’s shaken up grid may end up looking far more traditional on Sunday after 100 kilometres of racing to determine the order.

But until the second practice session is held around a likely dry Imola, it’s difficult to know how the first sprint race of the season could pan out.

8 comments on “Can Sainz pull off the sprint race recovery he needs to rebound from crash?”