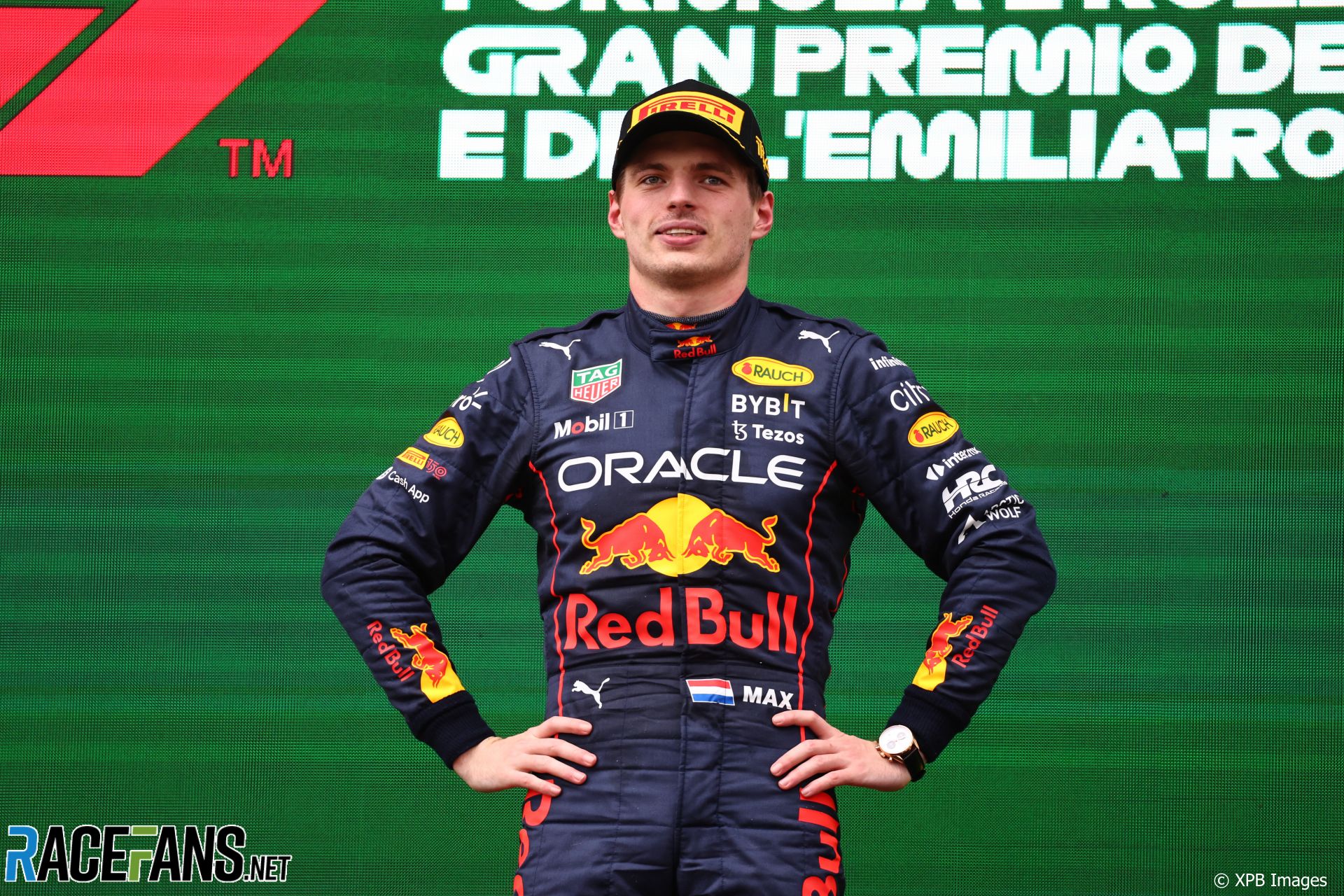 Max Verstappen secured maximum points from the Emilia-Romagna Grand Prix weekend by dominating from pole as Charles Leclerc threw away third place with a spin.

Verstappen was never troubled out front during a race that started wet but dried out over the 63 laps. Sergio Perez secured a Red Bull one-two in second, with Lando Norris inheriting third place after Leclerc spun at the Variante Alta chicane in the closing laps.

Rain had fallen over the Imola circuit between the end of the Formula 2 feature race and the start of the formation lap, leaving the track damp by the time the field set off from the grid. But with no rain falling for at least an hour before the lights, all 20 drivers lined up for the start on intermediate tyres.

When the lights went out, Verstappen got a much better start than in the sprint and led on the run to Tamburello, as Perez out-dragged the Ferrari of Leclerc to take second by the time they reached the chicane, while Norris also moved ahead of Leclerc to go into third.

Behind, Carlos Sainz Jnr was side-by-side with Daniel Ricciardo’s McLaren through the chicane and the pair made contact, sending the Ferrari spinning into the gravel and out of the race, while Valtteri Bottas tagged the rear of the McLaren, caught out by Ricciardo slowing in front of him.

The Safety Car was deployed while the Ferrari was recovered from the gravel, with the two Red Bulls leading Norris in the train. The race restarted at the start of the fifth lap, with Verstappen leading his team mate away.

Fernando Alonso had been hit lightly on the side of his Alpine by Mick Schumacher at the start of the race, but as the race restarted, Alonso’s lightly damaged sidepod suddenly ripped apart along the main straight, ripping a large whole in the side of the Alpine and forcing him into retirement.

On lap eight, Leclerc slipstreamed by Norris to take third place and began his pursuit of the two Red Bulls out front. Behind them, George Russell battled with Kevin Magnussen for multiple laps before eventually taking fifth place, before Bottas found a way by the Haas to demote Magnussen down to seventh.

The track began to dry out, McLaren were the first to risk a switch to dry tyres by bringing Ricciardo into the pits at the end of lap 16. On brand new mediums, Ricciardo immediately became the fastest man on the track, triggering a flurry of activity in the pit lane.

Red Bull bought Perez in from second place first, before Verstappen and Leclerc pitted the following lap. Leclerc emerged from the pit lane ahead of Perez to take second place, but Perez used his far warmer dry tyres to pass the Ferrari on the run to the Villeneuve Chicane. Further back, Esteban Ocon received a five second time penalty after Alpine released him in front of Lewis Hamilton in the pit lane in a manner the stewards decided was unsafe.

On the mediums, Leclerc initially seemed to have more pace than Perez and began to pressure him for second, getting close in the slipstream of the Red Bull but could not pull alongside as DRS had not been enabled. Perez built up a small gap over the Ferrari, but a mistake at the Variante Alta saw him miss the chicane completely, allowing Leclerc to loom large in his mirrors again. However, Leclerc was again unable to mount a challenge.

Verstappen looked comfortable out in the lead of the race, pulling away from Perez, who gradually established a gap over Leclerc in third. At the end of lap 49, Ferrari opted to bring Leclerc in for soft tyres. He rejoined just behind Norris, but was able to pass the McLaren with his fresh rubber on the following lap to retake third.

Red Bull responded to Ferrari’s stop by bringing in Perez for soft tyres, before doing the same for Verstappen the following lap. Perez rejoined in second place once again, but his advantage over Leclerc had disappeared.

As Leclerc tried to pressure Perez for second place, he took too much kerb into the Variante Alta and spun the Ferrari, lightly bouncing the car into the barrier. Leclerc was able to right his car and continue, but had to pit to change tyres and change his front wing, dropping him down to ninth place.

Leclerc had to try and make up as many places as possible before the chequered flag and managed to pass Magnussen for eighth and then Vettel for seventh, before then chasing down Yuki Tsunoda to take sixth place.

Out front, Verstappen cruised through the final laps and took the chequered flag to win his second race of the season, just over 15 seconds clear of team mate Perez. Norris inherited third place for McLaren after Leclerc’s mistake, securing his first podium of the season and a second consecutive third place at Imola.

Russell finished fourth for Mercedes after absorbing heavy pressure over the final laps from Valtteri Bottas in the Alfa Romeo. Leclerc eventually finished sixth, ahead of Tsunoda, Vettel and Magnussen, with Lance Stroll rounding out the points with Aston Martin’s strongest weekend of the season so far.

Lewis Hamilton finished a lap down in 13th place after struggling to find a way past Pierre Gasly in the second half of the race, inheriting a position after Ocon’s time penalty was applied.