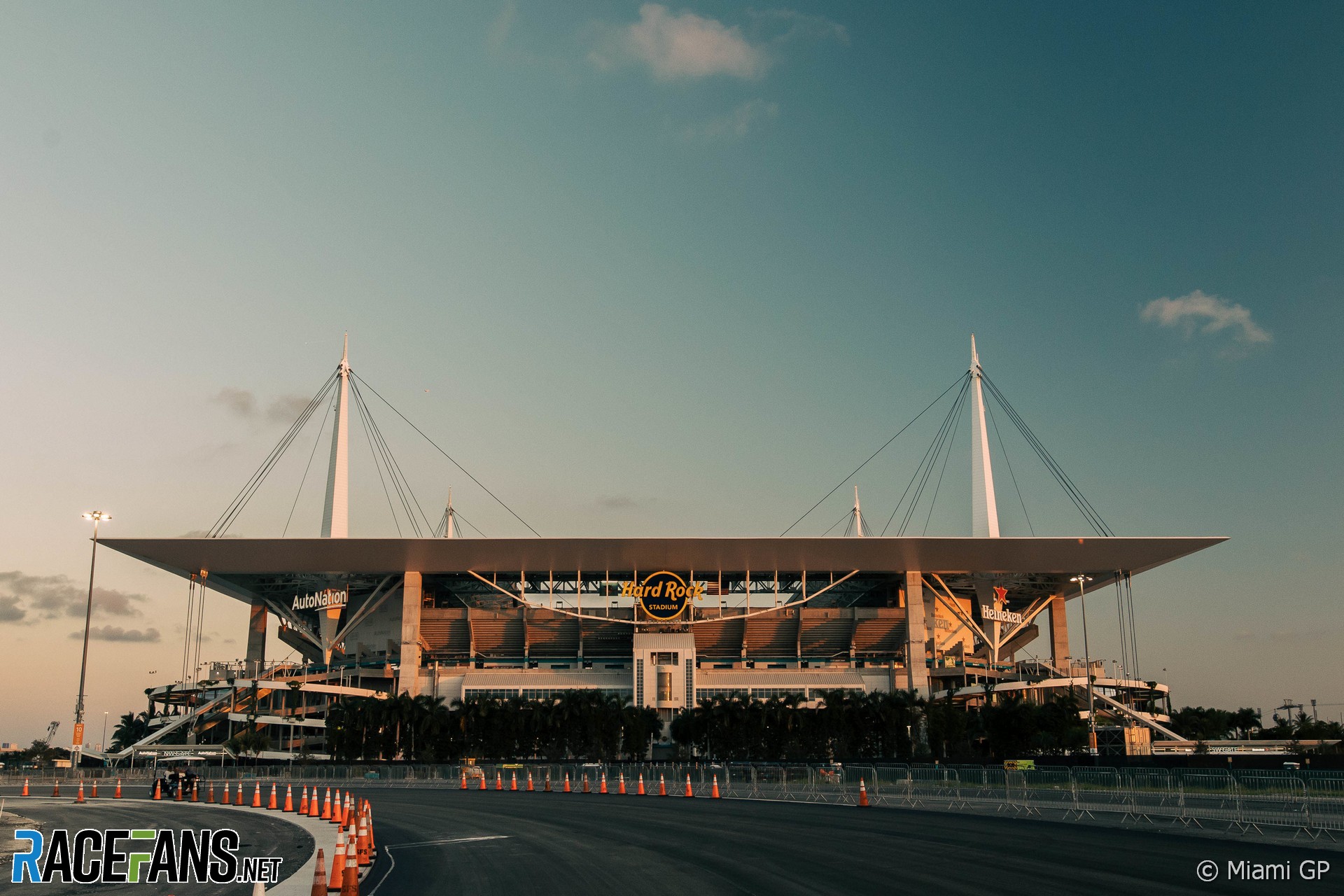 The fifth race of the 2022 season sees Formula 1 break new ground in the United States with the first ever Miami Grand Prix around Hard Rock Stadium, home of the Miami Dolphins NFL team.

But with a brand new circuit comes a number of unknowns not just about what kind of racing the track will produce, but how the ten teams will fare around the 5.4 kilometre course.

Will Ferrari or Red Bull make the most of Miami?

Over the first four rounds of the 2022 season, Charles Leclerc and Max Verstappen have shared two victories apiece to establish themselves as the clear favourites for the world championship.

After close contests in Bahrain and Saudi Arabia, Leclerc held a clear advantage over Verstappen in Australia, before Red Bull turned the tables in Imola by romping to a comfortable victory as a late spin cost Leclerc useful points.

Heading to the Miami International Autodrome – a completely un-raced temporary circuit set around the car park of an NFL stadium – it’s difficult to predict which of the two teams, if either, will have the best package for the new track. With an estimated average lap speed of around 223km/h – almost identical to Imola – Ferrari can expect another tough battle with Red Bull for this weekend. Especially as Mattia Binotto has already said that Ferrari will not bring any “main” upgrades to Florida.

Is Miami the new Monaco?

When it makes its race-hosting debut this weekend, Miami will become the 16th circuit in the 21st century to hold a Formula 1 grand prix for the first time. However, none of them were hyped up before their inaugural race quite as much as Miami has been.

It’s little surprise given that Miami marks the second race in the USA – a vital market for F1 to succeed in – but Formula 1 is treating this weekend’s grand prix as if it is the most important of the 23 that should take place in 2022. From teams creating their own Miami-themed merchandise to Lewis Hamilton appearing on race broadcast ABC television’s Good Morning America to promote the event, it’s clear the sport is heavily invested in making Miami a success.

But will it capture the imagination of American fans and the worldwide audience like it is hoped, given that the race will be set not around the seaside streets of Miami Beach as originally hoped but instead around the grounds of Hard Rock Stadium?

There is considerable set dressing planned to give the circuit an ‘authentic’ Miami feeling, with the artificial ‘marina’ inside of the turns six, seven and eight hairpin. Some fans have been vocal in their complaints over how expensive tickets are, with a general admission pass costing $300 – just for Friday alone.

Then there are nearby Miami Gardens residents – overwhelmingly made up of African American and Latin American backgrounds – whose complaints about the impact of the race on their community without seeing any benefits have seemingly fallen on deaf ears, putting the race at odds with F1’s ‘We Race As One’ inclusion drive of recent seasons.

But even if the Miami Grand Prix proves a success, there is also the nagging sense that its thunder has already been stolen by the announcement of next year’s Las Vegas Grand Prix, which may well prove to receive a level of hype a magnitude beyond that which Miami has already received.

Can Sainz turn his season around?

With the battle over the two championships available for 2022 increasingly looking like they will be fought between Red Bull and Ferrari, Carlos Sainz Jnr’s failure to finish for two consecutive Sundays has been a painful early blow to his own title aspirations.

After spinning off in Australia and being caught out in a turn one collision with Daniel Ricciardo, Sainz now sits 21 points behind Verstappen and 48 adrift of team mate Leclerc in the championship, still searching for his maiden pole position and race victory of his F1 career.

While his future with the Scuderia is secured with a two year extension with Ferrari announced at Imola, Sainz is growing increasingly at risk of falling so far behind his team mate that Ferrari may be tempted to prioritise Leclerc for what will likely be a gruelling season-long fight against Verstappen and Red Bull for the championship.

What happens at Miami will not determine the destination of the championship or Sainz’s fate within it, but it could go a long way towards either his own championship challenge getting back on track, or his status as number two within Ferrari for this season becoming more likely.

Will Mercedes upgrades bring relief to Russell and Hamilton?

Sitting third in the constructors’ championship after two podiums from the first four rounds would constitute a pretty solid start to a season for most F1 teams and a truly exceptional one for some. However, 2022 has marked Mercedes’ worst start to a season since 2013 – the final year before the introduction of the V6 turbo formula.

Mercedes have made no excuses for the clear deficit between them and their rivals out front, with Toto Wolff describing the team’s own car as “un-driveable” after Imola, due to the excessive porpoising down the straights, which George Russell said was the most severe he had faced all season. Hamilton struggled to overcome the car’s difficulties, leading to his worst weekend of results for over a decade.

Thankfully, there could finally be some respite for the pair this weekend. Mercedes’ trackside engineering director, Andrew Shovlin said after Imola in a post-weekend YouTube video that the team would bring upgrades to the W13 “hopefully soon – maybe as soon as Miami.”

Shovlin admitted that any upgrades would not solve their performance problems overnight, but anything that can help make their car more predictable and allow their drivers to extract more out of their car will go a long way to help.

Is Perez close to securing his Red Bull future?

After four races in 2022, Sergio Perez sits only five points behind team mate Verstappen in the drivers’ championship and third overall, despite scoring zero points in the opening race in Bahrain following a mechanical failure.

While Verstappen has been the faster of pair across the majority of race weekends so far, Perez has backed up his pre-season claims that he would be closer to Verstappen in these new 2022 cars than in 2021 by regularly running one place behind his team mate in races, allowing him to inherit second in Australia when Verstappen’s fuel system failure sent him out of the race and taking a one-two for Red Bull in Imola.

Perez is now providing exactly what Red Bull spent so long searching for after the departure of Daniel Ricciardo: a reliable partner to Verstappen who will back up his team mate out front and be capable of taking poles and victories of his own when the opportunity presents itself. With the long term futures of Verstappen, Leclerc and Sainz secured, only Perez’s seat remains unconfirmed for 2023 and beyond among the current top two teams.

If Perez maintains his solid run of form in Miami – and especially if Sainz’s woes continue – then he will be making a strong case for Red Bull to lock him as Verstappen’s team mate for the years to come.

Are you going to the Miami Grand Prix?

If you’re heading to USA for this weekend’s race, we want to hear from you:

Who do you think will be the team to beat in the Miami Grand Prix? Have your say below.

48 comments on “Will F1’s Miami debut live up to the hype? Five talking points for Sunday’s race”