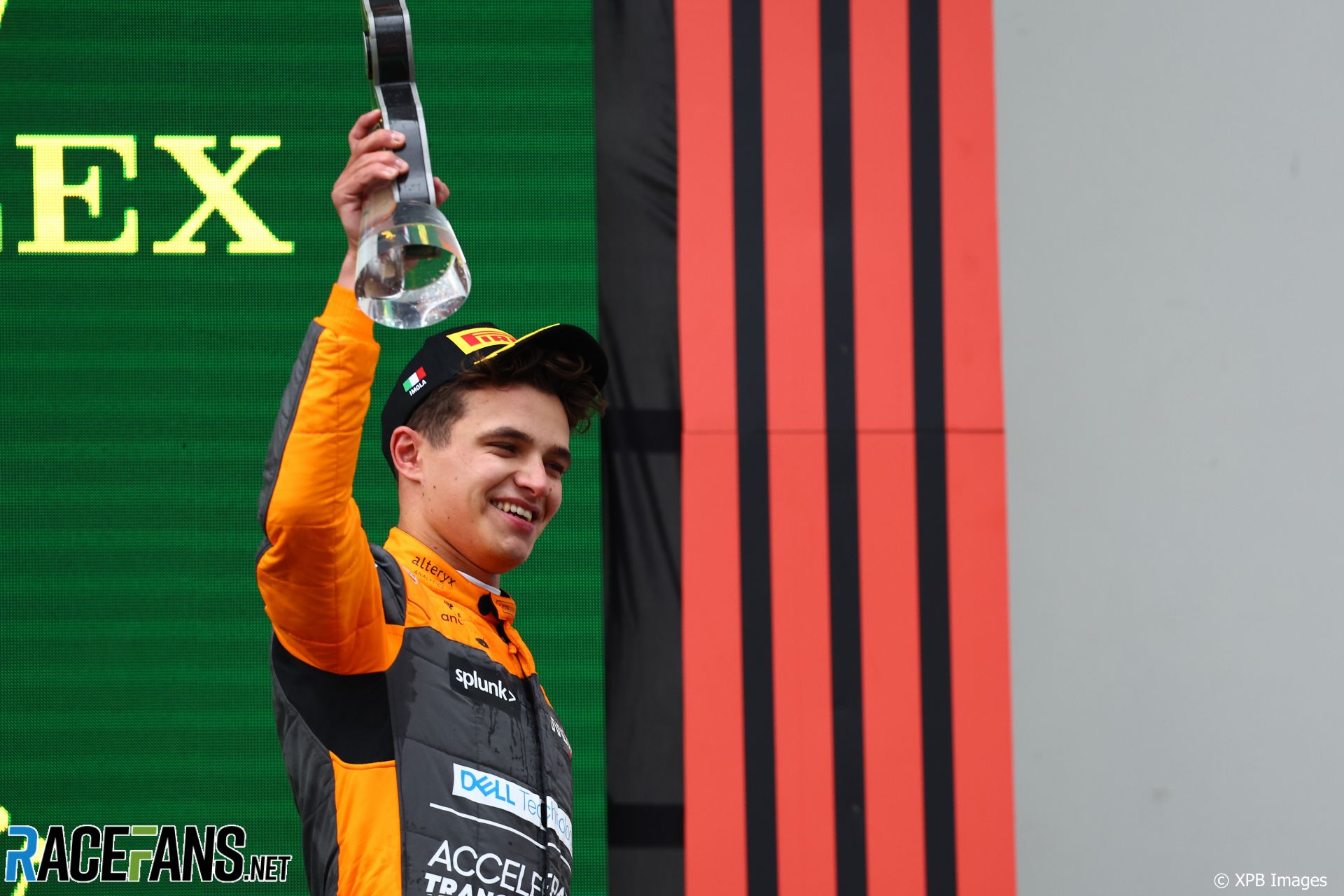 In the round-up: Lando Norris said he would not have been able to get a podium with the same car as he had driven in Bahrain.

After coming third at the Emilia-Romagna Grand Prix, Lando Norris said that small improvements from Bahrain onwards had been crucial to his performance at Imola.

“When it’s raining and when it’s wet, especially, you need a car which gives you confidence,” Norris explained. “If I had the car which I had in Bahrain, I probably wouldn’t have done what I did.

“We made some small improvements and it just helps me be able to find the limit easier, push the car and push it to a higher limit and have the confidence in wet conditions in qualifying to put it P3. You do need a good car in order to do that.”

McLaren began the season poorly in Bahrain, failing to score, but have steadily improved since. “I have to thank the team just from where we were in Bahrain to now, it’s amazing to see the improvements we’ve made,” said Norris. “We have so far to go still but we’ve made some good stuff, so we just need to continue trying to take more steps.”

Formula E’s only two-times champion, Jean-Eric Vergne, said that the fourth year of the series’ second-generation cars has pushed the competition closer than ever.

“The level of competition is extremely high this year,” said Vergne, who arrived at last weekend’s Monaco Eprix leading the championship and was able to secure a third-placed podium. “It is now the fourth year of this car, therefore all the drivers understand it very well, all the teams understand it very well and to make a difference, you need to look for the details that can make that.

“Now turning up in the races and trying to do a good job is not good enough. Of course there’s huge work that’s done at the factory and also the simulator, to try and understand what we could have done better in the last race and try and improve those tiny details that we will find.”

W Series driver Alice Powell has joined the Alpine Academy as its talent identification and development mentor, to find up and coming drivers and provide coaching and mentoring to those in the scheme.

Powell, who has been Alpine Academy associate driver Abbi Pulling’s mentor for several years, said: “More and more opportunities for women within motorsport are emerging now, but budding drivers often lack guidance and experience in the early days of their career.

“The Alpine Academy is an extremely useful stepping stone for all drivers. It provides a sense of credibility and has a defined place on the motorsport ladder. Mentoring is very important. We need to change the mindset of young women that these opportunities do exist, but to also give them the resilience to reach out and grab these opportunities with both hands.”

Here's a "fun" fact about the superstitious among you. In Monaco, Sam Bird…

Webber: 'I think people are being pretty harsh, pretty fast on Lewis. In Bahrain he drove brilliantly to third place. In Saudi there was a safety car involved there with a pit stop.'

Button: 'I don't miss Formula One' (The Gentleman's Journal)

Button: 'Formula One is obviously the pinnacle of motorsport, best drivers in the world, best manufacturers in the world. But, I think if you turned around and made them EV tomorrow, they’d become very heavy – and that’s exactly what you do not want.'

We believe that this is the first time in history that a Works driver has offered his own Grand Prix Ferrari publicly at auction. With such an outstanding provenance and race-winning history, this stunning V-12 Ferrari F1 car would surely be the centerpiece of any motorsport collection.

The organisation highlighted areas Williams Racing needed to improve on. In the past year a huge amount has been achieved including: deaf awareness training for staff, 10 members of staff from different departments are currently undertaking a 30-week BSL course, first deaf friendly tour was hosted for F1 fans, portable hearing loops have been placed in meeting rooms and in the museum, and BSL content is set to be available on the Williams Racing website.

Looking at the evolution of the Miami track design, StefMeister says that regardless of where F1 adds new tracks and on what streets, circuits are starting to look extremely familiar to each other:

My biggest gripe with most of the more modern circuits, Especially the more recent temporary one’s is how they all follow the same template.

I just struggle to get all that excited about these new additions because of this. Each circuit is clearly different in layout but when they are all following the same template they still just end up feeling too similar which just makes it tricky to get all that interested in them.
@Stefmeister