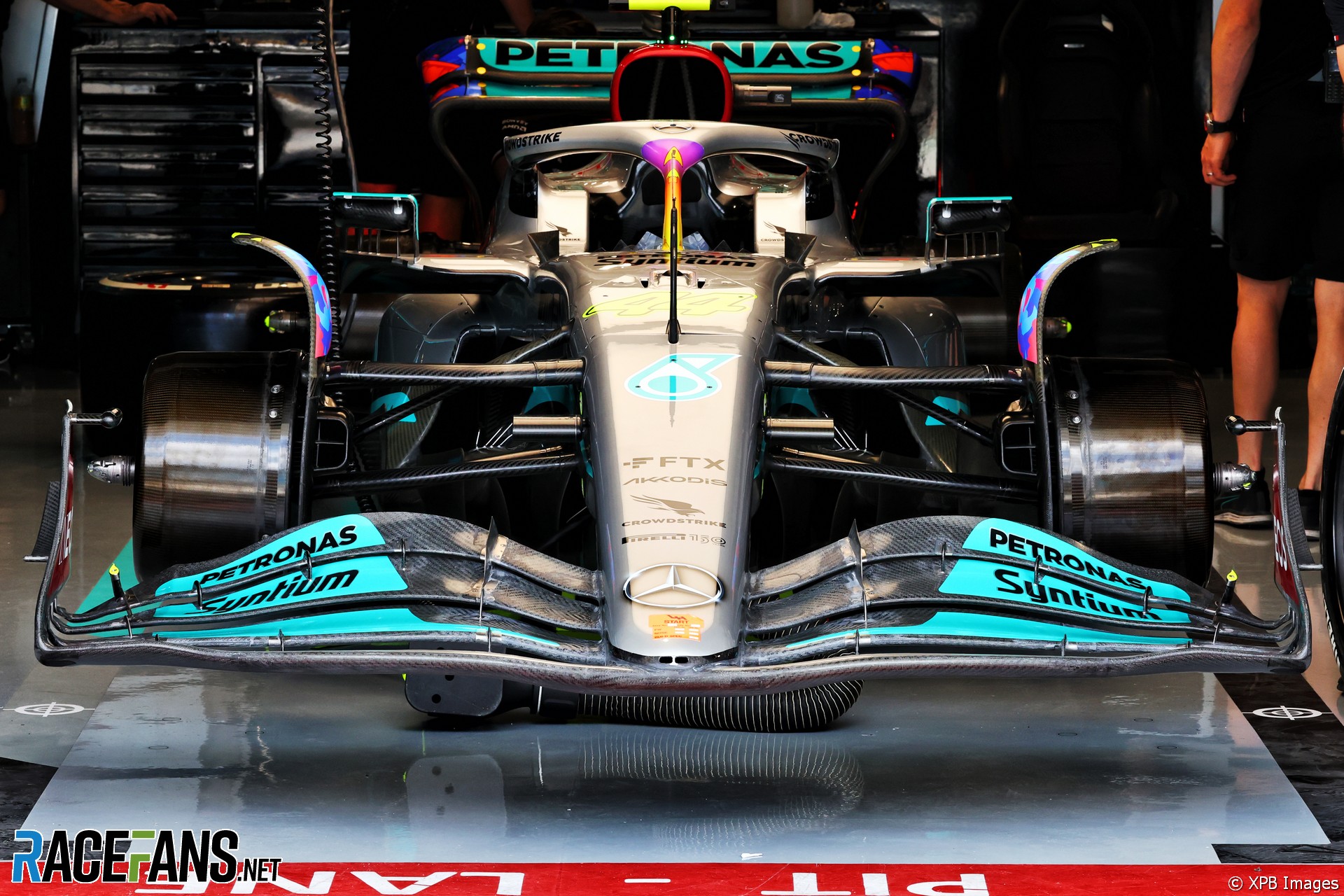 The team’s head of trackside engineering Andrew Shovlin described it as “an encouraging start to the weekend” but said they were reading to much into their apparent improvement compared to the last race at Imola.

Mercedes have changed the design of their front wing, cutting back the bodywork where the chord meets the endplate. They also introduced a lower-drag rear wing and a beam wing with a smaller chord.

The new endplate gives “more downforce for the same drag”, Shovlin told Sky, “and the rear wing’s a more efficient wing than the one we’ve been running. So you’ve seen at previous, low-drag tracks we’ve trimmed our wing away. This one’s designed for this downforce.

“Both of those together are useful and those are items that when we make them, we re-make them lighter, so it’s helping with getting weight out of the car.”

The new parts are also lighter, Shovlin added. “We’re always trying to get weight out of the car, we were still overweight. And it seems to be working reasonably well.”

Only one of their cars scraped into the top 10 in the damp first practice session at Imola two weeks ago, following which neither driver made the cut for Q3. Shovlin believes the different conditions in Miami will explain some of their apparent performance gain.

“In Imola we were struggling with [tyre] warm-up, the big thing here is overheating. Whether that’s shifted us in the right direction I don’t know.

“But we won’t get excited about where we are here, we know that we should have improved the car, but we know we’ve got a lot of work to do.”

The porpoising problem the team has suffered all year also seemed to have lessened in first practice. However Shovlin said they still don’t entirely understand what causes the ‘bouncing’ phenomenon.

“There is less but when we’ve gone from track to track we get different amounts and we don’t yet fully understand why, for instance, Jeddah seemed worse than Bahrain. We’re still building up a picture of that.

“It seems to be working quite well here and it’s not the issue it was in Imola. But then in Imola just that one session to set the car up really worked against us this is not an easy car to position the set-up at the moment.”

Despite Russell’s encouraging performance, Shovlin doesn’t believe the team is near to its pre-2022 status as regular pole position contenders.

“We’re not going to say that just yet. Obviously getting into Q3 is the minimum expectation for this team but we know that we had a long road to go along and we’re just trying to do that step-by-step.”