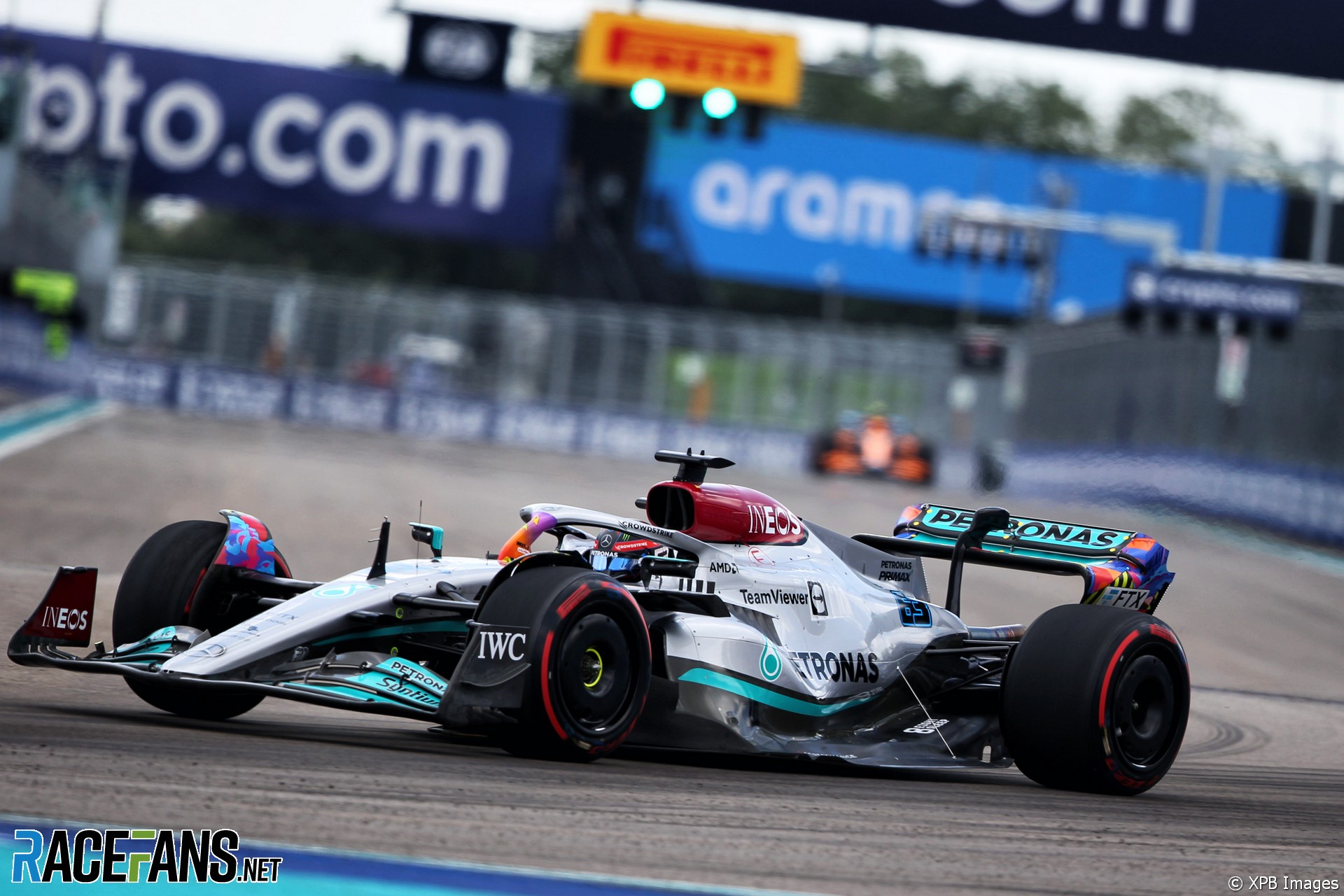 George Russell put Mercedes quickest at the end of Friday’s running for the Miami Grand Prix as Carlos Sainz Jnr crashed out of the session.

The Ferrari driver had been sitting atop the timing screens in the second practice session when he lost control and spun into the outside barriers at turn 14, causing significant damage to his car.

Max Verstappen’s difficult day continued with an apparent hydraulics failure leading to a fire on his right-rear wheel on his one and only lap of the session.

The air temperature had only dropped a single degree as the cars ventured out onto the circuit for the second and final Friday session. All runners opted for the medium compound tyres in the early minutes as they looked to gain long run data after acclimatising themselves with the circuit in the earlier session.

Following his first practice crash at turn seven, Valtteri Bottas was forced to sit out the entirety of the session as the Alfa Romeo mechanics continued to rebuild his car.

Mick Schumacher abandoned his first run of second practice after reporting that the bodywork on the sidepod on his Haas was being lifted by the air flowing over the car at high speed. The problem for Haas compounded itself when Kevin Magnussen began to experience the same damage on the sister car, forcing both to come back to the garage.

Carlos Sainz Jnr set the early pace, clocking a 1’30.964, with Sergio Perez just over half a tenth behind in second. However, Sainz’s promising early performance came to a sudden end when he lost control of his Ferrari on the exit of turn 13 and spinning into the barriers, causing major damage to his car.

The red flags stopped the session as Sainz climbed from his wrecked Ferrari, proceedings stopped for around ten minutes while the wreckage was cleared.

Eventually the session restarted, but Verstappen, who had yet to set a time, immediately reported heavy steering on his Red Bull. As he made his way around the lap, his car became more and more hard to control, until a tell-tale fire began to appear on Verstappen’s right-rear brake assembly. Verstappen managed to recover his car slowly back to the pits, getting in the way of many of his rivals in the process, but would remain in the garage for the rest of the hour.

With many teams moving onto the soft tyres, Lewis Hamilton briefly went quickest of all, until Charles Leclerc relived the Mercedes of the top spot with his first effort on the red walled tyres. George Russell then became the first driver to breach the 90 second barrier, posting a 1’29.938 to go fastest of all.

The red flags were flown for a second time in the hour after Nicholas Latifi pulled off the circuit at turn nine after reporting his concerns that one of his wheels was not attached securely to his Williams. That stopped the session and ruined many long runs for those out on the circuit at the time.

After another short delay, the session resumed a second time. Magnussen had a spin at turn seven, similar to Bottas’s accident in first practice, but managed to avoid the barriers, unlike the Alfa Romeo. Sergio Perez and Sebastian Vettel both separately spun their cars at turn 11, but were able to recover.

With no improvements at the top of the timing screen, the chequered flag signalled that Russell would end Friday as fastest for Mercedes, only the second time a Mercedes has finished top of a practice session this season.

Leclerc ended the day in second, a tenth from Russell’s best time of the session. Perez was third fastest in the Red Bull, almost three hundredths of a second ahead of Hamilton in fourth. Fernando Alonso was fifth fastest for Alpine, ahead of Lando Norris, Pierre Gasly, Zhou Guanyu and Esteban Ocon. Magnussen rounded out the top ten.