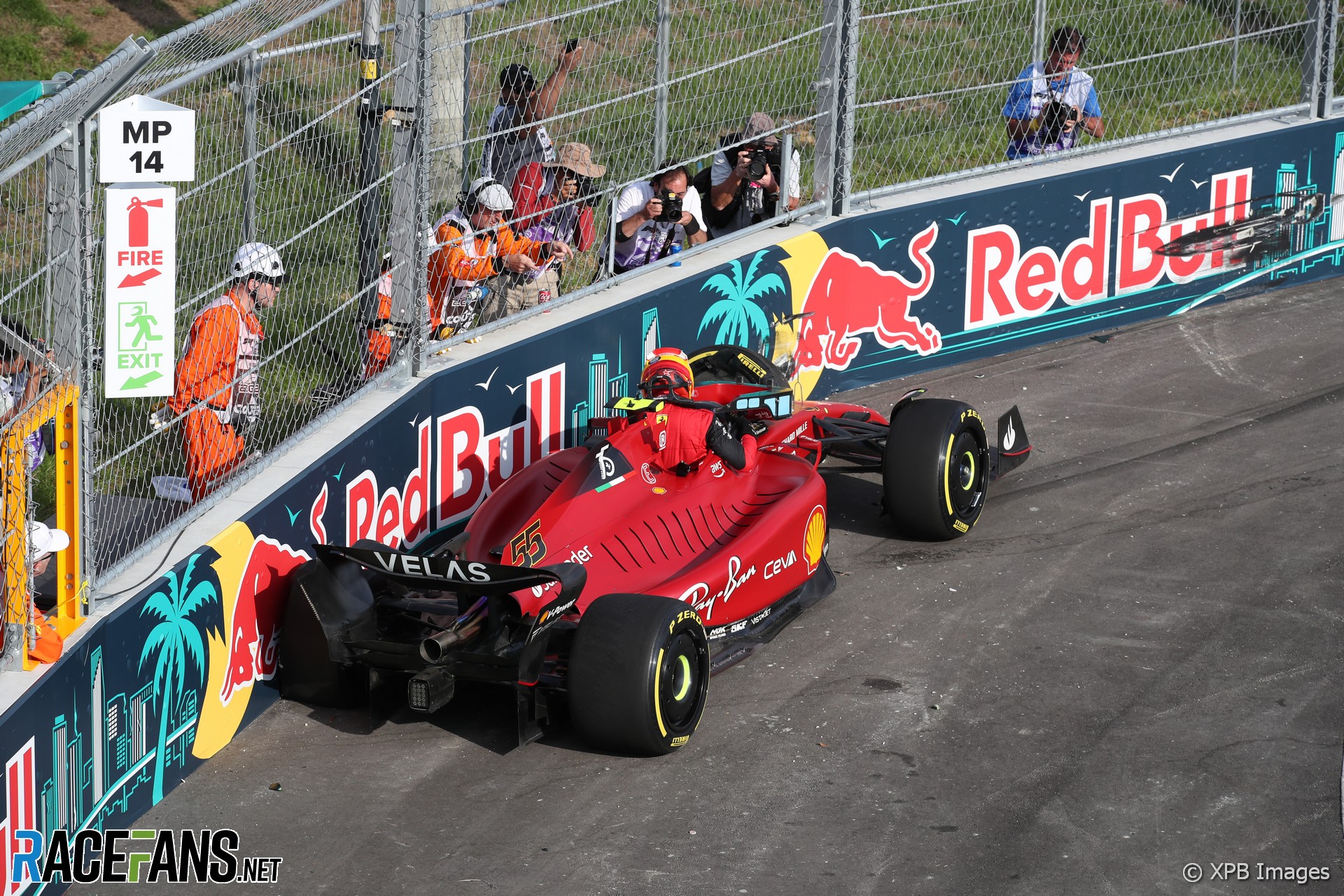 Formula 1 drivers have urged the Miami Grand Prix organisers to change the type of barrier used at the corner where Carlos Sainz Jnr and Esteban Ocon crashed heavily.

The Miami International Autodrome is holding its first grand prix this weekend and the concrete barrier used at turn 14 has become a focal point of criticism after two crashes within 24 hours.

Sainz and Ocon lost control of their cars in separate incidents at turn 13 on Friday and Saturday and both hit the barrier at turn 14. Ocon did so with enough force to crack his chassis, which meant he was unable to participate in qualifying.

“Carlos complained to the race director, we are all there listening to it and nothing has been done,” said Ocon. “There was a discussion last night, Carlos said the impact was way too big for what it should have been and today it felt huge, it’s probably the biggest shunt of my career.

“So yesterday Carlos got hurt, I got hurt today as well. The FIA should push harder for our safety. But the important thing is that we are able to race.”

His team mate Fernando Alonso says Sainz’s crash made it clear a different type of barrier is needed at that corner.

“We are in the car and we know how it feels when you hit the wall,” he said. “And Carlos was very clear yesterday that it was not right to have just the wall there, not other protection.

“So today we had another accident, same place, same angle, another driver was hurt. So tomorrow we have the second chance to put something there.”

Lance Stroll said it was “ridiculous” the corner was bordered by concrete barriers instead of TecPro, a widely-used alternative which absorbs impacts through layers of plastic and polystyrene.

“They should just put it,” he said “I don’t know what the big fuss about it is, no one wants to hit a concrete wall.”

The severity of the crashes alarmed drivers, according to Sergio Perez. “We were surprised with the amount of G [force] that Carlos had in this corner,” he said. “It’s such a little accident and so many G.

“We don’t want to see that again. We want extra precaution in future and avoid all those kind of heavy accidents.”

However Perez acknowledged “I don’t think it was possible for them to do any action” given the timeframes between sessions, however.

Sebastian Vettel was also unsure whether immediate change is possible, but insisted it is needed.

“It will always damage the car when you go off but the question is where you’re landing, whether there’s concrete or TecPro,” he said. “I don’t know what can be done overnight but when we come back, it’s important to look at all the places and see whether you can improve.

“Also around the straights, I think we should have SAFER walls, we shouldn’t just have this concrete blocks,” Vettel said. The Steel And Foam Energy Reduction (SAFER) barrier is widely used in American motorsport.

“Especially when we are coming up with circuit designs that have channelling around the straights, where you can’t see,” he added. “You don’t even need to go off, you can have a puncture which is not your fault and it’s always nicer to hit something softer rather than harder.”

Lewis Hamilton, however, said he had no concerns about safety at the track as the barriers are. “When we come to these new tracks, they do their best job. I think they’ve done a great job in all of these new tracks with safety,” he said.

“You can’t predict every single corner which where we’re going to need TecPro. But safety on track is great. So I think I think we, of course, after an experience like this weekend we can know that that’s an area that we can improve on. But that’s a part of the lessons we learn.”