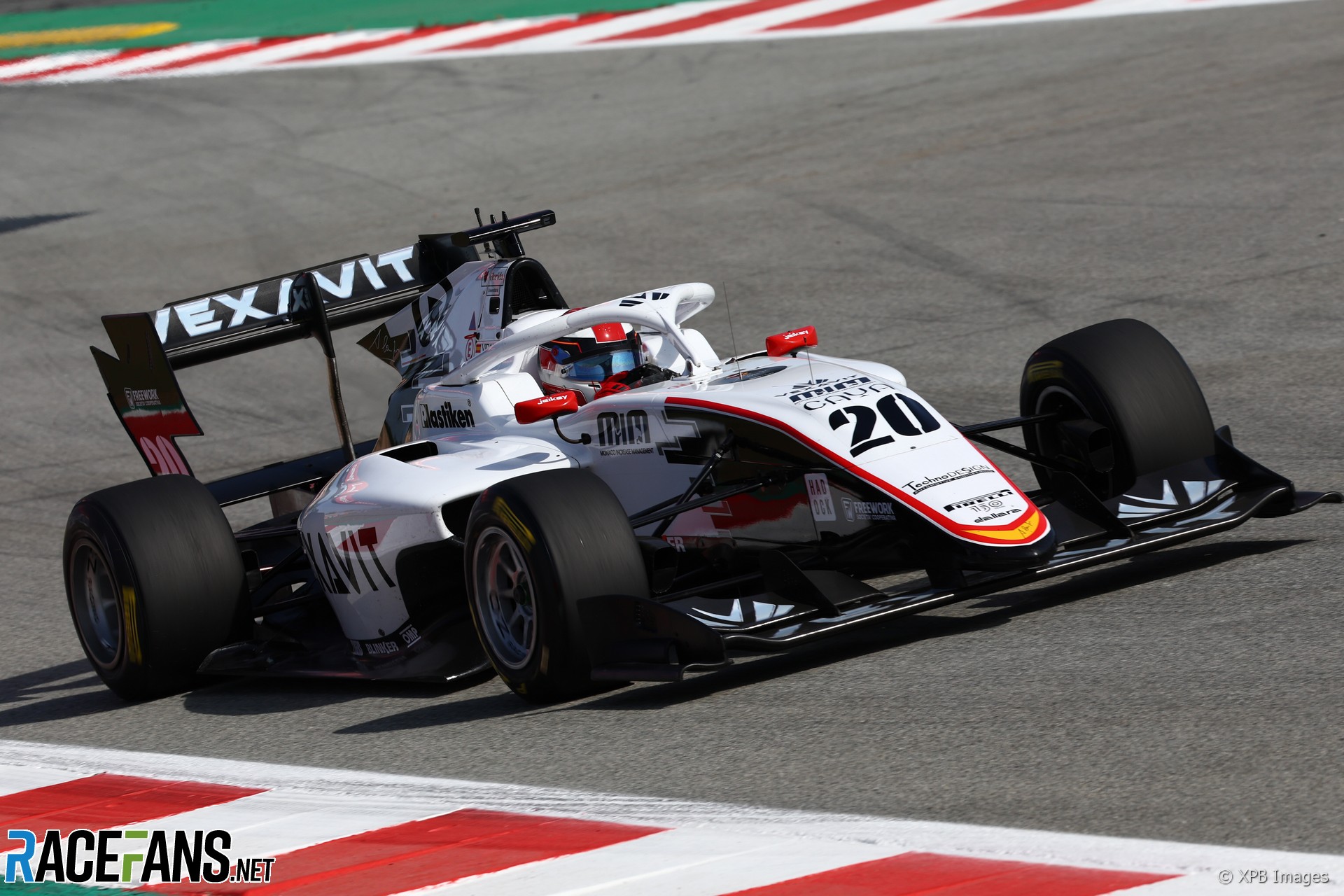 David Vidales won the Barcelona Formula 3 sprint race after being cleared by stewards for allegedly forcing second-placed Jak Crawford off the circuit at turn one.

The Spaniard took a provisional home win after leading every lap from partially-reversed-grid pole, but is currently under investigation for pushing Crawford onto the run off at turn one when the American driver attempted to take the lead late in the race.

Zane Maloney had originally claimed partially-reversed-grid pole but was disqualified from the qualifying session after missing the weighbridge, meaning he would start from the pit lane. That promoted home racer Vidales to pole, with Juan Manuel Correa alongside him and Jak Crawford and Kaylen Frederick behind.

Despite a three-way fight into turn one between Vidales, Correa and Crawford, it was the polesitter who emerged in the lead, Correa slotting in behind him as the front of the pack got away in the order it had started.

Isack Hadjar, starting from eighth, had a disastrous start and found himself having to recover from well down the order. When DRS was enabled on lap three, he was able to clear Josep Maria Marti through turn four to claim 14th in his steady progression back into the points positions.

On the following lap, Crawford was able to use DRS to pass Correa through the final turn, passing him on the straight and pulling out a more-than-half-second gap quickly.

“I’ve got no front grip,” Correa said on the radio, on lap six, after slipping further back from Crawford, almost into the clutches of Frederick behind.

Suddenly, championship leader Victor Martins began to fall down the order, going from ninth to 20th within a few corners on lap seven. He was able to return to the pits but did not get back into the race, the points leader out of any opportunity to reinforce his lead in the sprint race.

Franco Colapinto’s car, also on lap seven, had a visibly loose engine cover on the right side, appearing almost like a sail protruding from the back of the car as he drove down the straight. Eventually it finally fell off entirely, fully exposing his engine, leaving parts of his engine cover littered across the final sector and down the main straight. Only after the detachment was Colapinto shown the black and orange flag, instructing him to pit, on lap ten. Colapinto drove back to the VAR pit and retired from the race.

By lap 11, Crawford was right on the back of Vidales for the lead. On lap 13, Crawford made an attempt to the outside of turn one that did not work out, with Vidales defending and Crawford going off to the inside run-off and bouncing over a sausage kerb. The move was announced as under investigation by the stewards for Vidales having potentially forced Crawford off track.

Also on lap 13, Caio Collet was able to clear Frederick for fourth, Frederick looking in serious trouble as he was also passed by Alexander Smolyar. Frederick’s fall back gave Correa some breathing room, while Vidales was able to re-extend a second-and-a-half lead over Crawford behind.

Frederick’s woes increased on lap 16 as he had Arthur Leclerc in his mirrors, who was able to pass him for sixth at the start of lap 17. At the start of the same lap, Correa defended against Collet into turn one but the same move on the following lap demoted Correa out of the podium positions.

A botched attempt at an overtake sent Smolyar off road on the outside of turn two, putting Smolyar back on track behind Leclerc as well as keeping the place for Correa. The incident was noted by stewards but not placed under investigation before the end of the race.

On the final lap, Vidales led from Crawford by more than a second, Collet five seconds back from them. Vidales took the chequered flag for his maiden F3 win – subject to investigation – with Crawford taking second and Collet third while Leclerc was able to pass Correa in the final sector to take fourth.

Long after the chequered flag, the stewards cleared Vidales of pushing Crawford off the track, determining that he had “the right of the line and therefore decided that no further action was needed.”

Leclerc takes the lead of the championship from Martins, seven points ahead before tomorrow’s feature race and with tomorrow’s polesitter Roman Stanek also passing Martins by two points.