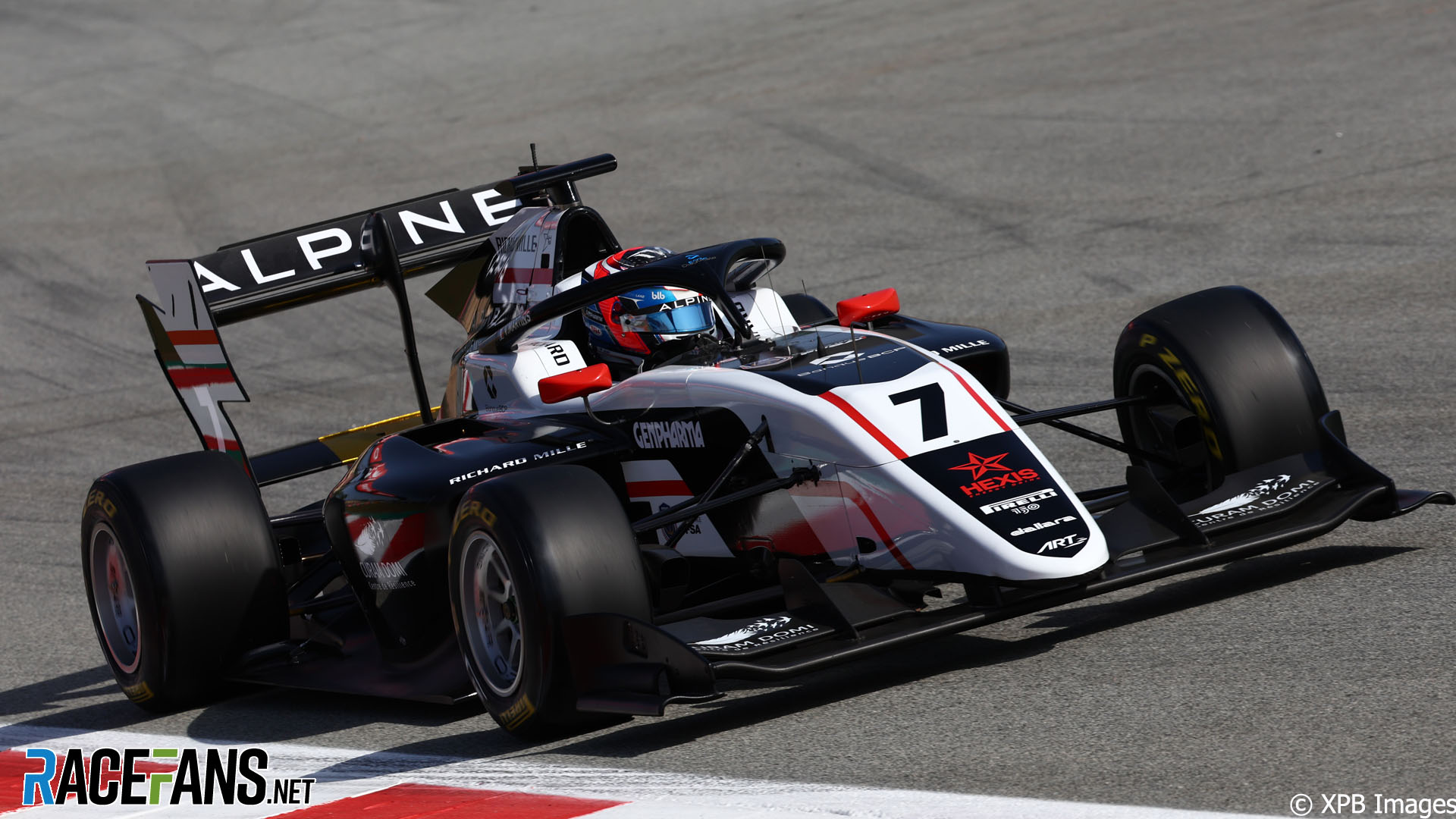 Victor Martins led every lap of the Formula 3 feature race in Barcelona, taking back the title lead he lost by retiring from Saturday’s sprint race.

Roman Stanek had clinched pole during a tense qualifying session, with former championship leader Victor Martins alongside him on the front row. Martins had been dominant in the first two rounds but a mechanical failure had pushed him back in the standings during yesterday’s sprint race.

Stanek got a good start, cutting across Martins to defend on the inside of turn one but Martins swept to the outside and past the Trident driver to confidently take the lead by turn two, despite having dipped a tyre onto the grass getting off the grid. Isack Hadjar, who started fourth, was also able to pass third-placed Alexander Smolyar while Jak Crawford, starting ninth, got a very good start to move up to seventh.

The race restarted on lap seven, Martins keeping the lead while Crawford pulled an early-lap move on Caio Collet to take sixth. Kaylen Frederick lost out badly at the restart, losing places to both Crawford and Collet to be forced down to eighth.

On lap 11, Brad Benavides’ Carlin also met the wall, going straight into the barrier between turns one and two, prompting another Safety Car period. The race restarted on lap 15 and Arthur Leclerc and yesterday’s sprint race winner David Vidales clashed into turn one while fighting for tenth. Vidales went off-track and fell down the order while Leclerc managed to hold on to 12th, before passing Saucy through the same section on lap 16.

Two Campos cars touched into turn four, with Hunter Yeany ending up with front wing damage and being forced to pit while Josep Maria Marti went into the gravel but was able to continue, albeit from the absolute rear of the pack. Yeany was subsequently issued a five-second time penalty for being responsible for the contact, already running in last place following his pitting for repairs.

Leclerc was issued a five-second time penalty on lap 19 for the earlier contact with Vidales. Leclerc, possibly unaware of this, then passed Correa for tenth into turn one after running wide over the grass near the pit exit while Correa defended aggressively down the start-finish straight. The incident was placed under investigation by the stewards who will conduct an inquiry after the race.

Correa took the place back, however, feeding Leclerc back to Gregoire Saucy behind with the two going side-by-side through the entire first sector while battling over for eleventh.

Ido Cohen and Kush Maini had a coming together on the back straight on the last lap, Maini’s front wing folding under his car but somehow avoiding the tyres.

Martins took the chequered flag cleanly, Stanek and Hadjar following behind the ART to complete the podium. The result, combined with Leclerc not scoring, puts Martins back in the lead of the championship ahead of the next round at Silverstone, in July.