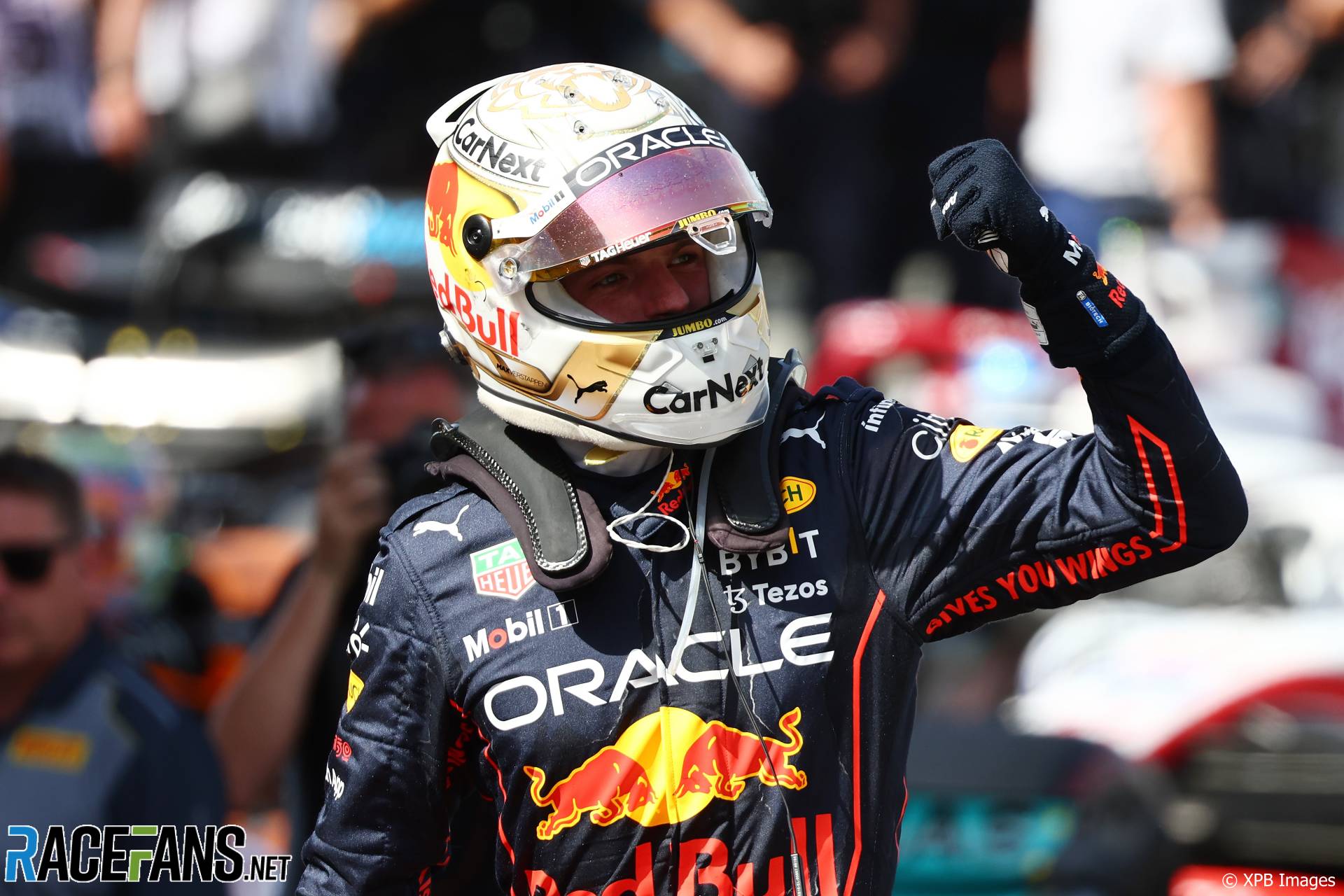 Max Verstappen won the Spanish Grand Prix despite an early trip through the gravel, while Charles Leclerc retired from the lead with a power unit problem.

At the start of the race, Leclerc moved to the inside to defend from Verstappen’s efforts to take the lead and successfully held his position into turn one. Behind, Russell pulled ahead of Carlos Sainz Jnr to jump to third by the first corner, while Perez followed the Mercedes through to demote Sainz to fifth.

Heading into turn four, Kevin Magnussen tried to pass Lewis Hamilton around the outside of the right hander, but the pair collided at the entry of the turn, sending the Haas bouncing across the gravel and leaving Hamilton with a puncture on his Mercedes. Both drivers recovered to the pits to fix damage and change tyres, but dropped to the rear of the field.

Leclerc led from Verstappen, with Russell, Perez and Sainz chasing behind. On the seventh lap, Sainz lost control of his Ferrari on the way into turn four, skidding into the gravel and plummeting down the order by the time he had recovered back onto the track. Then, just two laps later, Verstappen appeared to make an identical error at the exact same turn, dropping him behind Russell and Perez.

With Verstappen now behind Perez, Red Bull ordered Perez to allow the world champion by, which he duly complied with. Verstappen tried attacking Russell over what was now second place, but despite being within a second of the Mercedes, he appeared to have difficulty getting his DRS to open – a recurrence of the problem that affected him in qualifying.

Mercedes pitted Russell and Red Bull followed suit, pitting Verstappen on the same lap. After the pair switched from used softs to new medium tyres, they both left the pit lane just as close as they had been when the entered it. Over the following laps, Verstappen attempted to slipstream up to the rear of Russell’s car, but was continually hampered by his intermittent DRS working inconsistently between each zone.

Perez pitted from second and dropped back behind Russell and Verstappen in fourth, but leader Leclerc continued to remain out front on the soft tyres he had started the race on, maintaining a consistent, fast pace. Eventually, Ferrari pitted the leader on lap 21, switching him onto the medium tyres and rejoining with his lead comfortably intact.

Behind, the battle between Russell and Verstappen was intensifying. Verstappen’s DRS activated at the start of lap 24, allowing him to pull alongside the Mercedes through the first three corners. However, Russell repelled the Red Bull with robust defending through turn three, retaining his position.

Suddenly, Leclerc began slowing on the circuit with an apparent power unit problem striking the race leader with little warning. Despite Ferrari’s best efforts, the problem could not be fixed from inside the car. Leclerc was called into the garage and into retirement, his first failure to finish of the season.

The battle between Russell and Verstappen was now for the lead of the race. The fight allowed Perez to catch the pair ahead. He asked Red Bull to move Verstappen out of his way to allow him to attack the Mercedes. While the team did not grant Perez’s request, they instead brought Verstappen in for his second stop, moving him onto the softs. Perez now had a clear run at the now-leading Russell and used DRS to sweep by the Mercedes into the first corner and take first place.

At the halfway point of the race, it appeared that Perez and Russell were now committed to two-stop strategies, with Verstappen going for an aggressive three-stop. To make it work, Verstappen had to pass Valtteri Bottas in fourth and he did so, driving clean around the outside of the Alfa Romeo through the long turn 13.

Perez pulled a gap of around five seconds to the second-placed Russell, who was eventually caught by Verstappen on his soft tyres. Before the Red Bull could overtake him, Mercedes opted to bring Russell in and switch him onto a second set of mediums, rejoining in third place. Perez followed suit soon after, retaining his advantage over Russell, allowing Verstappen into the lead.

On lap 44, Verstappen pitted for a third time, moving back onto the medium tyres. Crucially, he emerged ahead of Russell in second place, leaving him with only his team mate ahead of him. Within four laps, Verstappen was almost a second behind the leader. Perez was told not to defend from his team mate if he attacked him, with Perez reluctantly accepting. Eventually, however, Red Bull ordered Perez to allow him team mate through into the lead. He complied on the approach to turn three, handing the lead of the race to Verstappen.

Russell and Perez both pitted for a third time onto the soft tyres, retaining their positions. Behind, Bottas was in fourth on a two-stop strategy, while Sainz and Hamilton – who had recovered all the way through the field after his lap one puncture – behind him. Sainz overtook the Alfa Romeo to take fourth into turn one, with Hamilton following him through as they went through turn three. Soon after, Hamilton used DRS to overtake Sainz around the outside of turn one, to cap off a stunning recovery to fourth.

Out front, Verstappen told his team he was happy to focus on bringing the car home. He cruised through the remaining laps to take the chequered flag, the race win and the championship lead. Perez took a comfortable second place – along with the fastest lap – while Russell took the final podium place in third.

Despite taking fourth from Sainz, Hamilton was warned that he was at risk of a retirement and needed to conduct major fuel saving in the final laps. He surrendered fourth back to Sainz, but had enough margin to reach the chequered flag in fifth ahead of Valtteri Bottas.

Esteban Ocon finished seventh, with Lando Norris fighting through an illness to claim eighth place. Fernando Alonso took ninth after starting from the back of the grid, with Yuki Tsunoda rounding out the points in tenth.