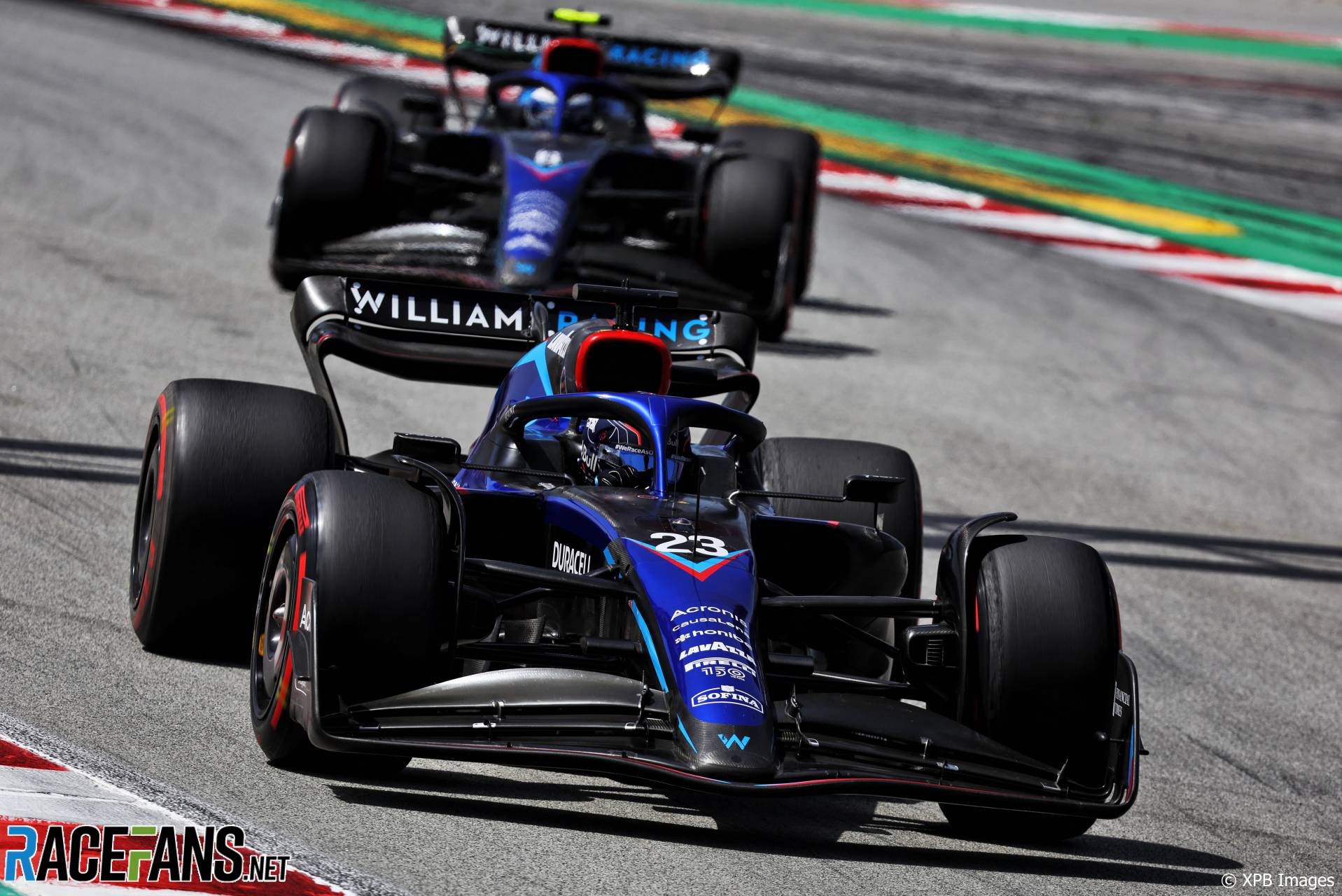 In the round-up: Williams’ tyre degradation was so severe that Alexander Albon had to make four pit stops and thinks it would have been quicker to do five.

Five-stopper would have been quicker – Albon

Alexander Albon said he suffered from serious tyre degradation after finishing the Spanish Grand Prix last, two laps down from the race leaders.

His tyres felt “really strange”, said Albon, after pitting four times. “On the laps to the grid I was already getting tyre deg and it was the same in the race,” Albon explained. “We did a four-stop but I could have done a five or six stop and it probably would have been quicker.

“There was just incredible degradation, I think I was 20kph slower than everyone else in turn three and turn nine, just struggling out there. We’re not normally that bad. I think there is something we just need to check because that wasn’t normal.”

Albon said he “couldn’t drive slow enough” to keep his tyres alive. “I was driving as slow as I could and the tyres were still going off. And not like a little bit, I was driving my first three laps two and a half, three seconds slower than I would normally and then it was still degrading massively. It was seconds [lost], straightaway after the first lap.

Lando Norris drove the Spanish Grand Prix after being extremely unwell all weekend in Barcelona, diagnosed with tonsillitis by McLaren team doctors after the race.

The McLaren driver said it had been one of the most difficult races he had ever competed in. “Today was tough. I was feeling really unwell before the race as I’m suffering with tonsillitis, and that, in combination with the high temperatures, made this one of the hardest races I’ve ever done.

“I’ve been a bit on the backfoot this weekend as most of my energy has been spent fighting off this illness,” admitted Norris, who missed the Spanish and Catalonian national anthems due to his condition on the grid. “I’ve had to miss a lot of engineering sessions, which has compromised my weekend, and I definitely wasn’t as prepared for the Grand Prix as I could have been.

“With that in mind,” Norris said, on his eighth-place finish, “I’m really pleased to have come out of the race with decent points for the team.”

AlphaTauri had a difficult weekend in Barcelona, after choosing not to bring an upgrade package yet. However, Yuki Tsunoda was able to score a point for the team with a tenth-place finish, which he said after the race showed how competitive the Red Bull sister team’s car can be.

“I think a lot of the teams increased performance from the new packages I can see,” reflected Tsunoda. “So I think we still can be happy scoring points in that situation.

“But obviously we need to improve the car to be able to fight consistently in a top P7, P6,” he continued. “In the end, those points are what is needed for the team to be P5 in the team championship. So currently it’s a very difficult situation, but at the same time, each point in each race race will count as well. We’ll see next race.”

MP Motorsport and ART Grand Prix were fined for breaches of Formula 2 pit stop procedure during the Barcelona feature race. MP Motorsport was first informed of a pit stop infraction and encouraged eventual winner driver Felipe Drugovich to pull out a gap of more than five seconds over Jack Doohan in order to compensate for any potential penalty.

The teams transgressed by failing to lie tyres removed from the car flat on their side in the pit lane before moving on to the next tyre to be worked on. F2 prohibits tyres being left in any other way, to prevent them rolling into the path of cars.

MP was issued a €1,000 (£845) fine for the infraction. ART was found to have committed the offence in both its pit stops, for Théo Pourchaire and Frederick Vesti, so was issued two fines and both drivers now carry the risk of a suspended five-place grid drop for the rest of the season if the team commits the offence again.

After the Formula 3 feature race in Barcelona, Arthur Leclerc was issued a five-second penalty for erratic driving while attacking Juan-Manuel Correa on the main straight of the circuit, driving onto the grass near the exit of the pit lane before overtaking Correa into turn one. Leclerc appeared to give the place back to Correa later in the lap but was still issued the post-race penalty which moved him from a 14th to 16th-place finish.

Everything was perfect until the loss of power. Disappointed but it happens over the course of a season and pace was really good before.
Next stop : Home ❤️
Forza @scuderiaferrari pic.twitter.com/YzcKyhSb8h

P3 and another podium! I gave it my all to hold Max off but they were flying today, so congrats to him on the win. Mega comeback from LH too. Thanks to the whole team – this result is all down to their hard work. Let’s keep pushing. 💪 pic.twitter.com/IYqFPW7XvX

Definitely not the smoothest of days but we’ll take that! 🥵💪

To have another One-Two makes me very proud. A big thank you goes out to @SChecoPerez for being a great teammate once again 🤝

And also thanks to @redbullracing for the mega job on strategy 🙌 (1/2) pic.twitter.com/xjjhJMPiaI

Very happy to finally be on the Spanish podium.
Thanks to all the fans for so much love; awesome result for the whole team. Now full focus for the Monaco GP.#nevergiveup #spanishgp pic.twitter.com/sR7G7IYKaN

Among other things, the price of the battery rose from 245,000 euros to 264,812 euros. The maintenance costs of the battery, the chassis and the drive also became more expensive.

Honda junior Kakunoshin Ohta raced into the Super Formula Lights points lead in round three at Autopolis. Ohta took pole for race one of the weekend, which had an aborted start that left drivers sitting on the grid for over a quarter of an hour before they then did a second formation lap.

"For more than a year, they, along with others, worked tirelessly so Zuniga can communicate between a microchip on his brain and a computer in the car."

After Leclerc’s retirement from the Spanish Grand Prix, Tifoso1989 says that Ferrari has to capitalise on next weekend in Monaco to claw back psychological ground lost to Red Bull in Barcelona.

Max’s retirements came when he was running second, in tracks where Ferrari held the upper hand pace wise. Leclerc retired from the lead, handing the win to Verstappen in a track that suited Ferrari more than Red Bull and even in race conditions Leclerc was fast enough to keep him behind with non tyre degradation issues.

Technically speaking Max has lost more points but psychologically Leclerc and Ferrari got a big blow from Red Bull today. A knockdown that certainly won’t be easy to compensate on the scorecards in the end of the season.

Leclerc raced Verstappen wisely in Miami, where Ferrari was on the back foot in terms of tyre degradation but he has been pushing since the start of the season. The error in Imola and his pole yesterday after the spin are a testament of his attacking style.

He and Ferrari need to deliver in Monaco, in a circuit that is theoretically suited to them, otherwise Red Bull and Max will take the psychological advantage over them and they will be extremely hard to beat in the rest of the season.
@tifoso1989