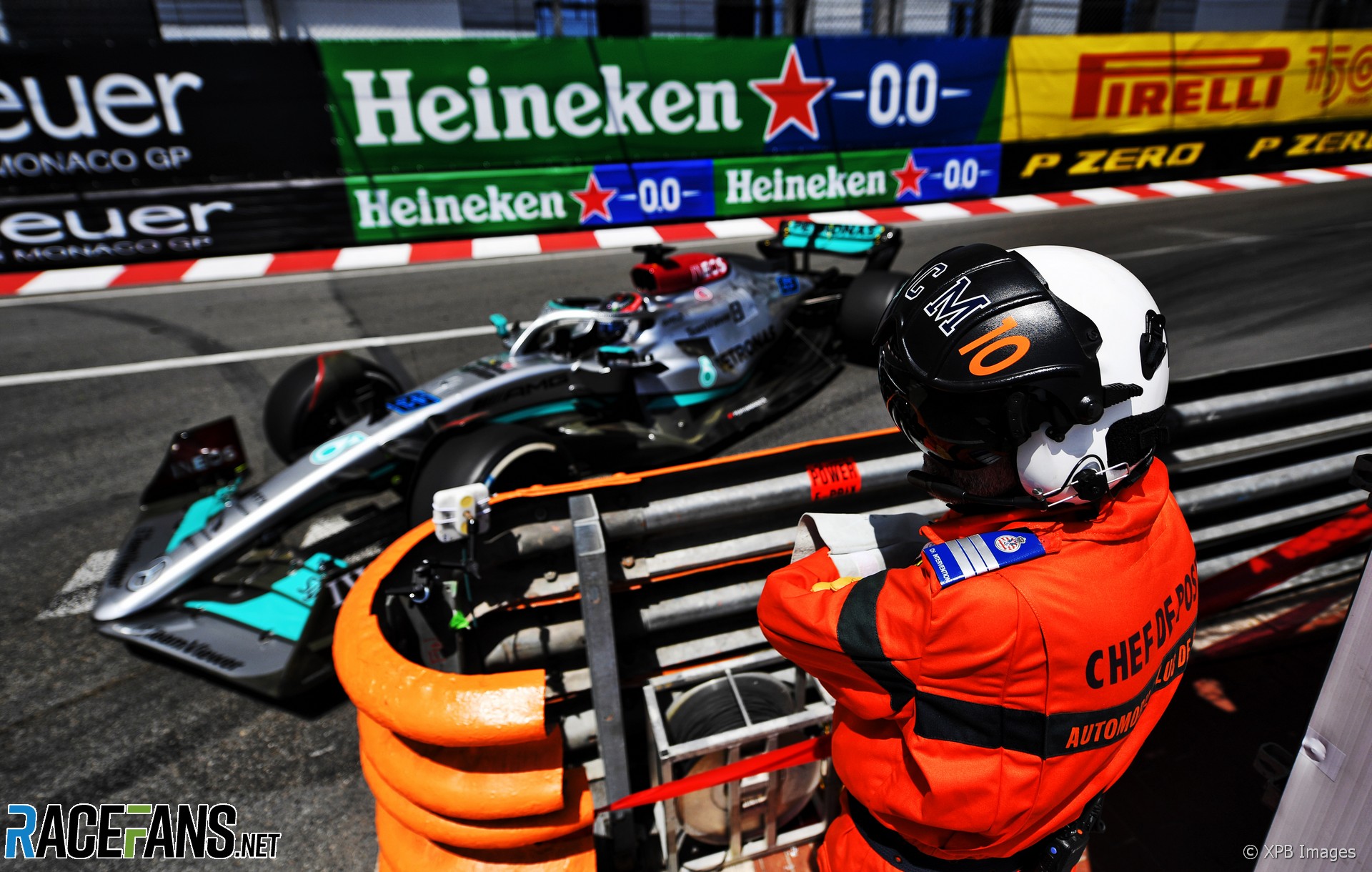 George Russell revealed he struck the inside wall at the Nouvelle Chicane on his final lap in Q3 that ultimately saw him take sixth on the grid.

The Mercedes driver out-qualified Lewis Hamilton again and will line up two slots ahead of his team mate on the grid. Russell was one of few drivers who was able to improve his time in Q3 by putting in a second flying lap before the session was red-flagged due to the crashes involving Sergio Perez and Carlos Sainz Jnr.

Qualifying was also suspended earlier in the session after Yuki Tsunoda clipped the inside barrier on the entry to the Nouvelle Chicane, causing a puncture to his left-front tyre. Russell admitted that he too had clipped the barrier in similar fashion, but avoided damage.

“On my quickest lap, I actually hit the wall on the left of turn 10 after the tunnel,” Russell explained. “It’s impressive to see how the steering lock was the same rate and you see the wheel sort of completely bend in the wishbone and somehow I just managed to keep it together.”

Russell was beaten to fifth place on the grid by McLaren’s Lando Norris. Although he was disappointed to be only sixth, Russell believes it is a fair reflection of Mercedes’ pace around the Monaco circuit.

“This place is thrilling to drive, even if it’s not the pole,” said Russell. “But it is a little bit tough for us all as a team when you feel like you’ve kind of optimised it and you only come home with P6.

“P6 is not a result to be celebrating, but I think when you look at it objectively, there was no reason for us to be any higher.”

Mercedes have struggled with severe bouncing on their cars caused by their stiff suspension settings this weekend. Russell says the problems show how their upgrade package from last weekend’s Spanish Grand Prix improved their performance in high speed corners more than low speed.

“We’ve really struggled with compliance of the car – it’s been really stiff this weekend,” he said.

“Following Barcelona, our strengths were straight-line speed and the high-speed corners and there’s none of those in [Monaco]. So I was really pleased with the lap. Obviously there was the red flag, but I think I was still four tenths up on Lewis and Fernando [Alonso], so that was promising.”