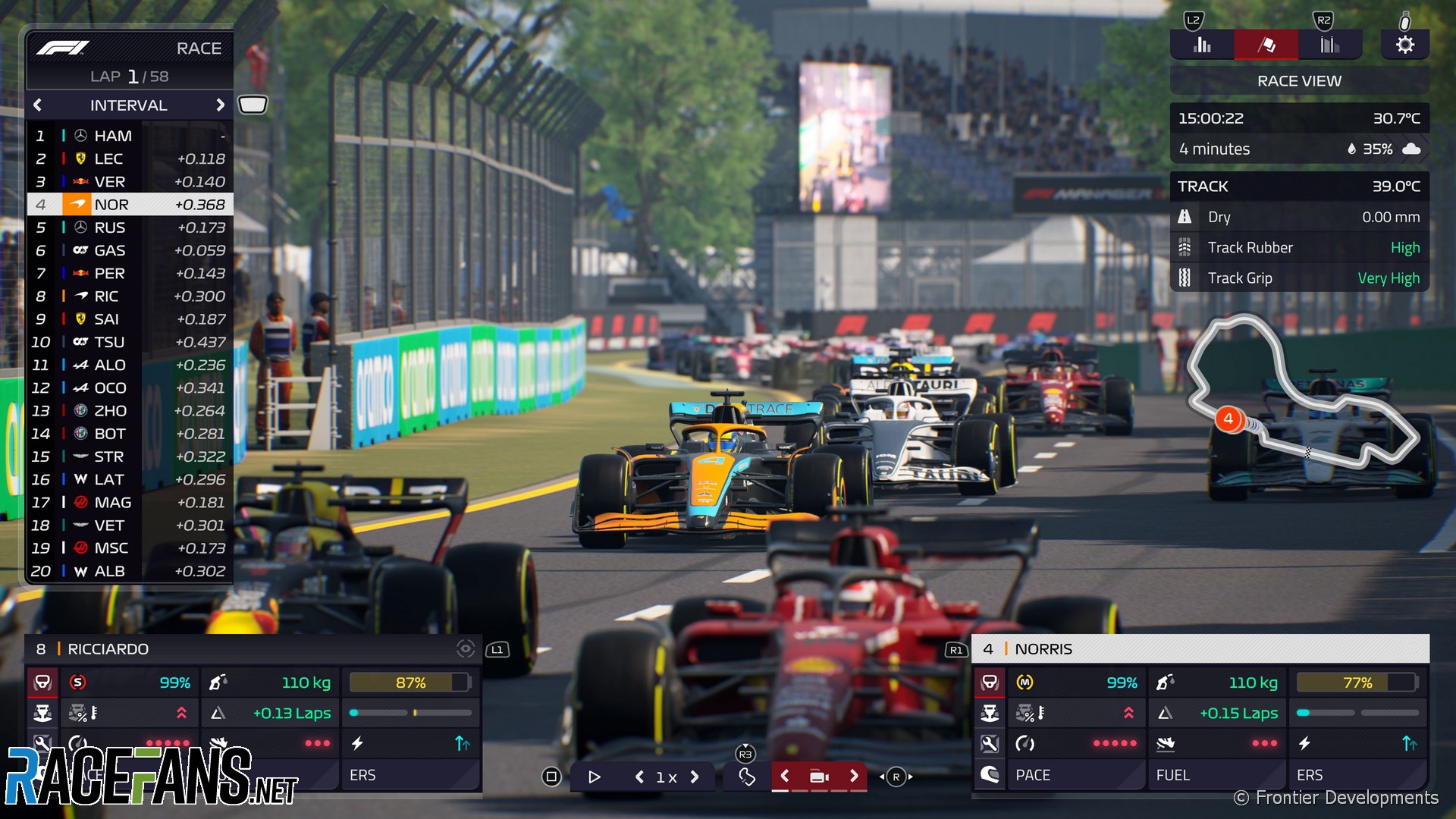 All professional sport is political. All international sport requires preparation, planning and persistence away from the field of play to succeed. And this is perhaps more true of motorsport than any other discipline.

But while what happens back at the factory often matters more to a Formula 1 team’s success than what they do on the track, it’s been over 20 years since the last officially licensed F1 management game allowed players to virtually assume the role of team principal for themselves.

Yes, there have been plenty of unofficial browser-based games and forgettable mobile manager games like F1 Clash, but if you’ve wanted a ‘full fat’ manager game based around the world’s most popular motorsport, you’ve only had the old classics like Grand Prix Manager 2 and Grand Prix World to go with. Sega dipped their toes into the genre with 2017’s solid Motorsport Manager by PlaySport Games, but anyone who has wanted to take control of one of the same ten teams they see compete every grand prix weekend in a game has had to wait a long time for that opportunity.

So when Frontier Developments invited RaceFans to their Cambridge studios to get a hands-on preview of their brand new F1 Manager 22, the one question that came to mind was ‘is this the F1 management simulation game players have been waiting for?’.

When it is released on August 25th, F1 Manager 22 will allow players to take over the role of team principal of any of the ten existing F1 teams and try to bring them up to compete for both the drivers and constructors’ championships over multiple seasons. Available on PC, Xbox One and Series S|X and PlayStation 4 and 5, Frontier’s developers promise the game will offer the same core experience between PC and console with all systems and menus designed to work just as well with a controller as with a keyboard and mouse.

To pre-empt the inevitable questions: No, you cannot create your own team in the game and once you choose which team you’ll be taking over, you’re locked in and cannot switch between teams within a save if you fancy a different challenge or get fired. But while some will be disappointed with those limitations, the gameplay has more than enough depth to it to help make your save an immersive one whichever team you opt for.

This is truly shaping up to be the closest thing to a ‘Football Manager for F1’ motorsport fans have seen. Be prepared to spend countless hours shifting through menus. Thankfully, every part of the game drips authenticity, with the slick menu system looking as if it was designed by FOM’s graphics team themselves. If anything, the effect is that F1 Manager 22 feels more like an officially F1 product than even Codemasters’ racing title can at times.

Every aspect of your team is under your control. From negotiating sponsorship contracts to developing new parts for your car and investing in improving facilities for your team like your wind tunnel or simulator, there’s a lot you have to consider as a team principal – especially under the pressures of the budget cap pressing down on every decision.

The impressive driver roster includes all 20 F1 drivers but also the entire field of Formula 2 and the FIA Formula 3 championship – all available to scout, hire and develop using experience points gained from driving. As the seasons progress through your save, AI generated drivers – commonly known as ‘regens’ in the world of Football Manager – will fill the gaps created when the real world drivers retire or leave the junior formulae.

Beyond just drivers, F1 Manager 22 also real world technical staff such as designers and race engineers who are all rated based on their perceived abilities. Drivers and race engineers do have relationships that require nurturing to make them effective, but if you’re at, say, Williams and offer him enough money, you may be able to tempt Peter Bonnington away from his partnership with Lewis Hamilton. Frontier say that everything is based on data, and with a former Alpine data analyst on the team, you can be confident that their numbers will all add up.

When it comes to the actual on-track action, F1 Manager 22 has not spared any expense in trying to recreate a broadcast-quality experience. Whether it’s practice, qualifying or races, you can watch every second of the action rendered in genuinely impressive 3D through the Unreal Engine – either through TV-esque cameras or by cycling through onboard views.

The result is impressive, with the circuits and cars alike rendered in genuinely high fidelity. Yes, the animations of cars driving around the circuits or racing side-by-side aren’t quite as natural looking as they are in F1 2021, but as a representation of a race, the effect is more than good enough to let you suspend your disbelief and pretend you’re watching a real broadcast.

The sheer volume of data and information available can be a little overwhelming at first, but the actions you can choose to take during sessions are relatively limited – not too surprising given that you’re not actually driving the cars.

You can instruct your drivers on how hard to lean on their tyres, whether to adopt any fuel saving techniques and what ERS mode they should be in. Thankfully, drivers are autonomous enough that you don’t need to give them basic commands like ‘use DRS’ or ‘overtake that backmarker’. And when you do give them commands, you hear the actual engineer radio through their message to your driver.

So if, for instance, you want command Alonso to save fuel, you’ll hear an actual radio message by engineer Karel Loos taken from the FOM broadcast archives telling his driver to “lift and coast please, Fernando”, with Alonso radioing “okay” in reply. Someone at Frontier has spent a lot of time scouring the archives to cover almost every possible scenario for every engineer and the effect goes such a long way to enhancing your immersion during gameplay.

The more laps you cover in practice, the more confident your driver will be in their set up for race day. For each circuit, you can customise and save multiple bespoke pit strategies that will be there the following season. But just as in real life, races do not always go to plan. Safety Cars and even red flag stoppages are featured in the game, which you will have to react to just as the strategists on the pit wall do. When you’re hunting down sixth place on the final lap, only to have your driver lock up under braking for Baku’s tight first turn and end their race in the barriers, you’ll realise just how emotionally invested you’ve become in the outcome even if it’s just a game.

Races are full distance, but you can play them at double speed if you wish. You can accelerate up to 16x speed, but from 4x speed and faster, you’ll be limited to a two-dimensional view of the action. Every time an incident happens on track – such as an overtake or a retirement – you’ll have the opportunity to watch an instant replay of the action, featuring a short clip of your mechanics reacting to whatever just happened back in the garage.

Despite the attention to detail to provide as authentic an experience as possible, Frontier have made a few deliberate design choices to prioritise gameplay over reality. There are no junior driver academies in the name, meaning that you are free to try and sign Arthur Leclerc to Mercedes, even if he is a Ferrari academy driver in reality.

Also, if you choose to replace Mike Krack at Aston Martin, the team’s upcoming new factory will not be reflected in the game – you’ll have to manually invest in building up your facilities just as you would with any other team. Car models are also generic, rather than bespoke to each team. And if you introduce new parts to your car, these will not be reflected visually in the game.

But those are only likely to be minor problems for those who have been waiting for a game like this for over two decades. And with the release date in the end of August now confirmed, it will not be too long until players can get their hands on the debut entry on what is confirmed to be a yearly new franchise.