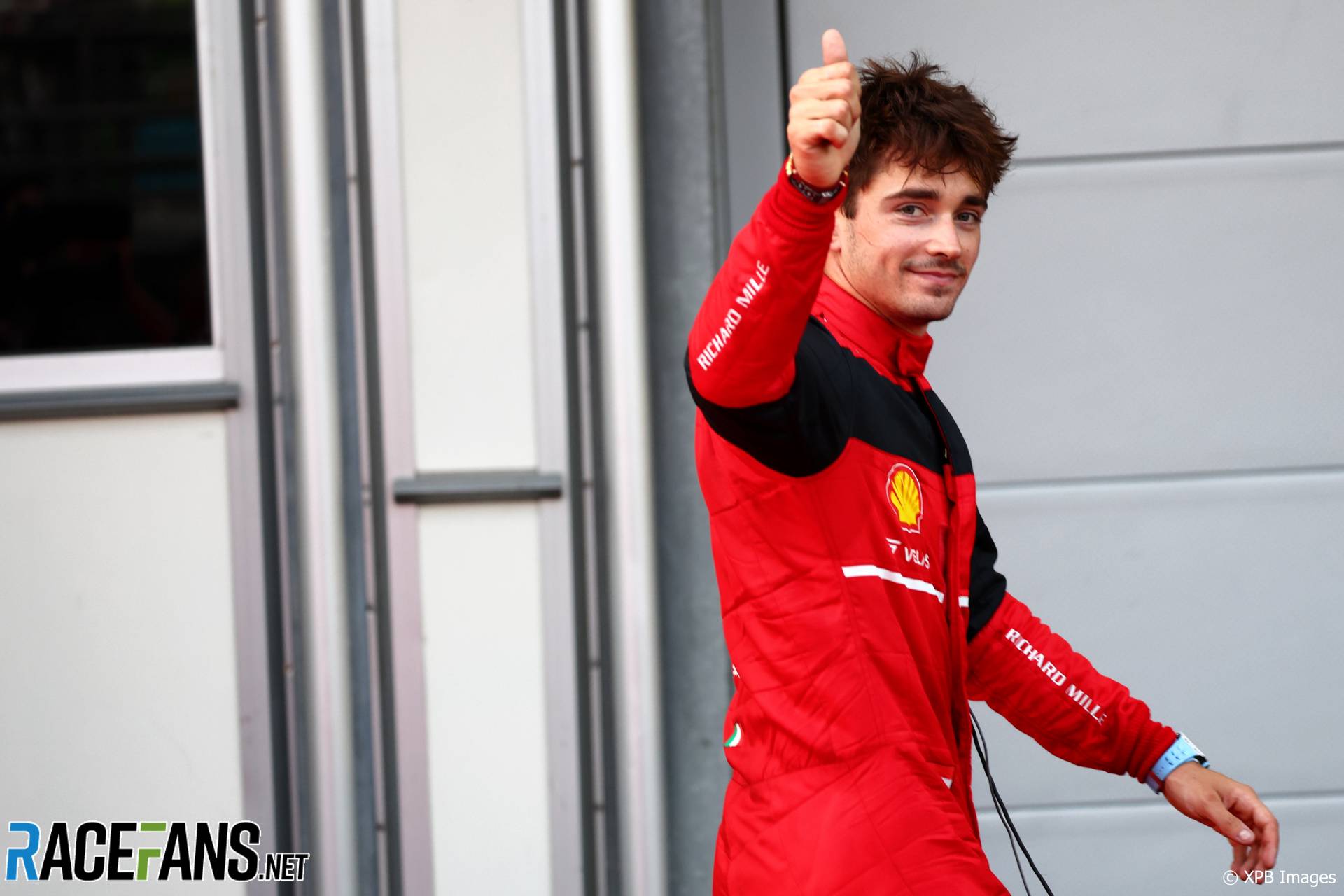 His Ferrari team mate Carlos Sainz Jnr was on provisional pole as drivers began their final qualifying laps. But a mistake at turn two left him unable to improve.

That opened the door for Leclerc, who thundered to pole with a flying final effort. Sainz’s demise also allowed Perez and Verstappen to take second and third for Red Bull.

The two Red Bulls were fastest at the end of the first run, Max Verstappen two tenths of a second faster than Sergio Perez. Leclerc was third, Sainz fourth in the other Ferrari, before George Russell split the Ferraris to take fourth place. Sebastian Vettel became the first driver to venture down one of the many escape roads around the Baku circuit, locking up on the approach to turn three.

Leclerc’s second effort was an improvement and he went fastest with a 1’42.865, less than a tenth quicker than Verstappen. But that was quickly beaten by Perez and then Verstappen, putting Red Bull back on top.

Heading into the final five minutes, the drop zone consisted of the two Williams of Alexander Albon and Nicholas Latifi, Valtteri Bottas’s Alfa Romeo, Lance Stroll’s Aston Martin and Mick Schumacher’s Haas – the latter trio all slower than their team mates by at least a secopnd. Those in potential danger of being knocked down into elimination were Daniel Ricciardo, Lewis Hamilton and – most in jeopardy – Kevin Magnussen in 15th.

Hamilton improved to go eighth-quickest, but Stroll’s chances of progressing appeared to be ruined when he locked up approaching turn seven and slowly speared into the barrier. Stroll managed to reverse out and recover to the circuit and opted to take another attempt at a fastest lap. But that appeared to backfire when he carried too much speed into turn two, clattering into the outside wall and bringing out the red flags with two-and-a-half minutes remaining.

When the session restarted, Hamilton led the pack back out ahead of team mate Russeell. Further back, there was a mad scramble for drivers to cross the timing line before the chequered flag. Somehow, all 14 cars got there in time, but many did not have a clear track in front of them in which to try and improve.

Out of all of them, only Bottas made any notable improvement, jumping from 17th to 15th, securing safe passage to Q2 at the expense of Kevin Magnussen. Bottas had gone by Fernando Alonso after the Alpine driver ran off the circuit at turn 15, but he appeared to have done so before the first yellow flag was shown in reaction to the incident. Albon behind was furious, suggesting on his radio that Alonso had deliberately gone slowly to sabotage the laps of cars behind him to ensure he would progress.

“He needs to get penalised, this guy,” Albon fumed. “He has to. It’s ridiculous.

“He was doing it the whole lap. He was driving slowly on purpose. It was so obvious how he went off the track. It was ridiculous. He braked so early and then he just went off the circuit.”

Magnussen was eliminated in 16th, ahead of the two Williams cars of Albon and Latifi. Stroll was eliminated in 19th after his crashes, with Schumacher 20th and last after being unable to improve during the melee of the final minute.

The second phase of qualifying saw Red Bull win the race to take to the track first, with Ferrari again hanging back to take advantage of clearer air.

Rather than pitting, the Red Bulls and the Ferraris both remained on circuit for multiple cool-down laps before their next timed runs. However, Vettel brought out the yellow flags briefly when he locked up under braking for turn 15, sliding head-on into the barriers at low speed. He was able to reverse his Aston Martin out and continue on his way.

Once the track was cleared, Perez’s next flying lap saw him take fastest time, while Leclerc also improved to go second-fastest. The pace-setters were increasingly pushing the limits: Leclerc touched the wall on the entry to turn seven, then Verstappen kissed the barrier at the exit of the same corner.

Hamilton briefly brought out the yellow flags out of turn 12 as he tried to allow the McLarens of Norris and Ricciardo past, but had to give up and start his lap without a tow after being reminded of the maximum time requirement. Norris and Hamilton will be investigated after qualifying for driving unnecessarily slowly.

In the final minute, the drop zone consisted of Norris, Esteban Ocon, Ricciardo, Zhou Guanyu and Valtteri Bottas. The two McLarens had enough time for one final effort, but while Ricciardo improved, he only gained one position and moved to 12th. Norris was then the only driver able to improve and appeared to be on a faster time, but a mistake at turn 16 put paid to his chances of progressing and he abandoned his final run.

The two McLarens were therefore eliminated in 11th and 12th, with Ocon also out in 13th. The two Alfa Romeos were the final cars knocked out, with Zhou out-qualifying team mate Bottas.

The final part of qualifying began with Alonso leading Pierre Gasly out of the pit lane with the two Mercedes of Hamilton and Russell running in tandem behind. Yuki Tsunoda was left on his own, before the two Ferraris and two Red Bulls were both paired up around the six-kilometre course.

Sainz was the first of the front runners to cross the line, his team mate following eight seconds behind, with Perez leading Verstappen over the line. Sainz’s first effort was good enough to see him take provisional pole ahead his team mate by just under half a tenth. But the Red Bulls were unable to beat Sainz’s time, Perez moving to provisional third place after clipping the barrier at turn five, just ahead of Verstappen.

Gasly’s first lap was good enough to see him into fifth position, while the two Mercedes of Russell and Hamilton were split by Vettel’s Aston Martin, Russell having benefitted from being the second of the Mercedes in the running order.

In the closing minutes, Ferrari were the first out once more, with Sainz again ahead of Leclerc, only with Gasly in between. Verstappen was sent out ahead of Perez, after the second Red Bull was fired up late due to a refuelling problem.

Sainz’s second effort was ruined at turn two when he brushed the wall on the exit, later abandoning his lap. That left the door for pole wide open for Leclerc and he took full advantage, jumping to the top spot by almost half a second.

It was all down to Red Bull to deny Leclerc his fourth consecutive pole position. Verstappen could not, jumping by Sainz into second place over three tenths slower than Leclerc. Perez’s final effort was better than his team mate’s, but still almost three tenths off Leclerc’s best time.

Leclerc therefore claimed pole position to take his fifth pole of the season. Perez will start alongside him on the front row, with Verstappen behind in third and Sainz starting from fourth. Russell will start from fifth, ahead of Gasly and Hamilton, unless the latter is penalised for the Norris incident. Tsunoda will line up eighth, with Vettel and Alonso rounding out the top ten.