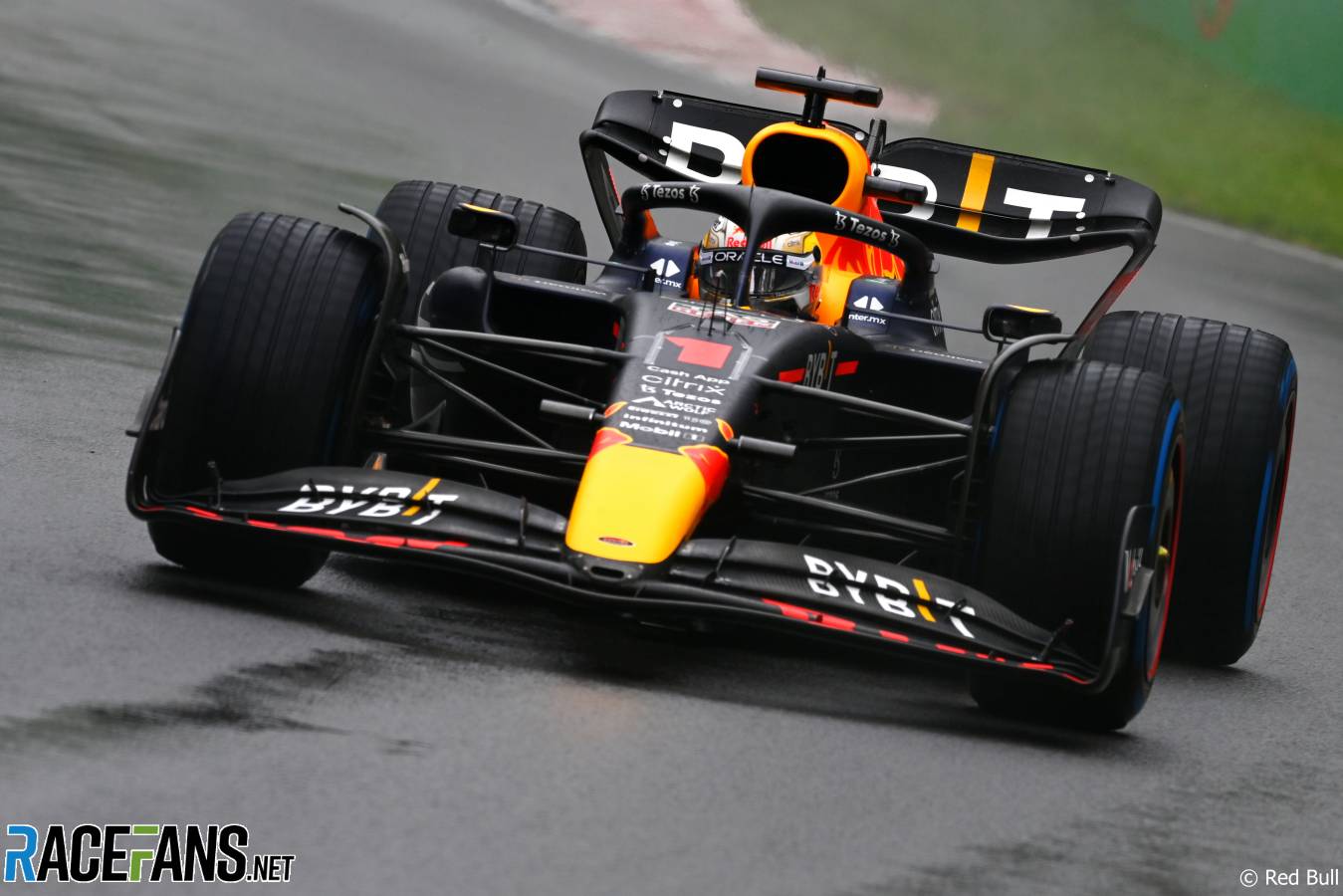 Max Verstappen will start the Canadian Grand Prix from pole position, but team mate Sergio Perez is mired in the midfield after crashing in Q2.

Carlos Sainz Jnr came close to joining him on the front row, but was denied by an inspired effort from Fernando Alonso, who secured his best starting position since he started the 2012 German Grand Prix from pole position.

Lewis Hamilton is the first Mercedes driver on the grid in fourth, after team mate George Russell’s slick-tyre gamble backfired.

Following a dry day of running on Friday, and a final practice session run on a largely soaked track, more rain fell ahead of the start of qualifying. All 20 drivers headed out within the first three minutes, full wet weather tyres the order of the day as they navigated a treacherous, puddle-strewn surface, light rain continuing to fall.

Of the initial runners, George Russell as the first to establish a serious benchmark, lapping in 1’36.688. Max Verstappen was almost three-quarters of a second off that with his first effort. Several of the other drivers who were first across the line immediately had their lap times deleted for cutting the chicane at the end of the lap.

By halfway through the session the track surface was improving quickly, enough for Kevin Magnussen to suddenly vault from the bottom of the times to fastest. He was soon shuffled back by the consistently rapid Russell and Max Verstappen.

At the opposite end of the times, Sebastian Vettel as having difficulty escaping the bottom five, having two lap times deleted for exceeding the track limits at turn 10. That left him 18th heading into the final five minutes, ahead of his team mate Lance Stroll, who was complaining of a lack of grip, and Nicholas Latifi, who was consistently last for much of the session.

Charles Leclerc, who was doomed to start from the back row due to his power unit change penalties, also languished in the bottom five for a long time, before eventually piecing together a clean enough lap to breach the top 10.

Most drivers ran the same set of wet tyres from the beginning of the session until the end. The Aston Martin drivers pitted for fresh sets after half-a-dozen laps each, however, Vettel complaining he felt like something had broken on his car. Pierre Gasly also took fresh rubber after seven laps.

With a minute remaining Verstappen, who had complained about traffic thwarting his efforts to improve, got a clear lap in and went quickest. His team mate Sergio Perez could only managed 12th.

A late improvement by Alexander Albon put Gasly into the drop zone. The AlphaTauri driver was the first to take the chequered flag, and with the conditions improving rapidly, couldn’t escape the bottom five.

Latifi failed to match his team mate, ending up 19th ahead of Yuki Tsunoda. The AlphaTauri driver was also due to start from the back due to power unit penalties.

The Aston Martin pair completed the bottom five. Vettel lamented what felt like a huge change in balance for him since the earlier practice session, in which he’d finished third. Stroll’s misery at joining his fellow Canadian in elimination at home was temporarily compounded when the stewards announced he was under investigation for failing to slow for yellow flags – Carlos Sainz Jnr had gone up the escape road at turn three – but the investigation was dropped.

The stewards also announced both Ferrari drivers and Albon were under investigation for driving unnecessarily slowly. They issued a further announcement that Sainz had potentially rejoined in an unsafe fashion when he went off – Esteban Ocon complained his rival “came back on the track like a madman” – but later decided no investigation was needed.

The 15 drivers left opted for a mix of intermediate and full wet weather tyres when Q2 began. Among those who opted for the heavier tread, Hamilton was quick to report he felt the crossover point to intermediates was near.

However as drivers pushed harder on the drying track, more mistakes crept in. Albon slithered off at turn six and stopped his Williams just shy of the barrier. Then Perez went off more emphatically, locking his right-front at turn three and nosing into the TecPro barrier, triggering a red flag.

By the time the Red Bull had been cleared away and the session restarted, with nine minutes left on the clock, all drivers were content to run on intermediates, though Mick Schumacher noted it was still too wet for slicks, the racing line still heavily damp in places, and a substantial puddle on the inside of turn one.

Verstappen attacked the drying course, producing a 1’27.764 which put him over a second ahead of the chasing pack. Magnussen crossed the line soon after to take second, as the track continued to dry rapidly. Sainz then claimed the top spot, but Verstappen immediately improved again, gaining one-and-a-half seconds on consecutive laps.

Verstappen continued to hammer away, lopping whole seconds off the benchmark each time he came around. Schumacher, who turned down the opportunity to fit a fresh set of tyres, unexpectedly set the quickest time of all through the first sector, on his way to a time which briefly put him third.

To little surprise, Verstappen was top of the times when the chequered flag brought an end to the flurry of improvements. With Leclerc not setting a time, Norris sidelined after reporting a power unit problem and Perez out, only two further drivers faced elimination.

A last-gasp improvement for Ocon spelled disappointment for Valtteri Bottas, as he failed to accompany his team mate Guanyu Zhou into Q3. Albon also went no further.

As the final phase of qualifying began parts of the straight were visibly dry, while many corners remained damp and some puddles were still lurking. The conditions looked likely to chew up the intermediate tyres quickly.

Verstappen urged his team to ensure a set of slicks were on hand. In response he was told he had just 45 seconds margin to complete the team’s Q3 run plan, and was later advised other drivers were doing the same. He quickly put up a 1’22.701 to lead the times, initially a second clear of second-placed Hamilton, until Russell pegged his team mate back by two-tenths of a second.

While Verstappen monopolised the top spot the fight for the remaining positions appeared wide open. Schumacher, showing great form again, moved ahead of the Mercedes, then Alonso and finally Sainz did the same.

Halfway through Q3 the drivers headed to the pits for fresh tyres. Hamilton twice suggested switching to slicks, but left the pits on intermediates. Russell, meanwhile, called for slicks and rejoined the track on a set of softs.

But it didn’t pay off. He made it as far as turn two on his first flying lap before slithering off and knocking the barrier with his rear wing.

The brief delay caused by that yellow flag didn’t put Verstappen off his stride, though he complained the team hadn’t cut it finer with his final qualifying run, as he still had 45 seconds in hand. He and Sainz matched times around the first two sectors of their final lap, but the Ferrari driver lost seven-tenths of a second at the end of the lap, and Verstappen grabbed pole position.

The flying Alonso took advantage of Sainz’s delay, and split him from Verstappen, joining the Red Bull driver on the front row. Hamilton had to settle for fourth place after being the first driver to start his final lap.

The Haas drivers claimed the third row of the grid, Magnussen ahead of Schumacher. Ocon came next ahead of Russell in his damaged Mercedes, then Ricciardo and Zhou.