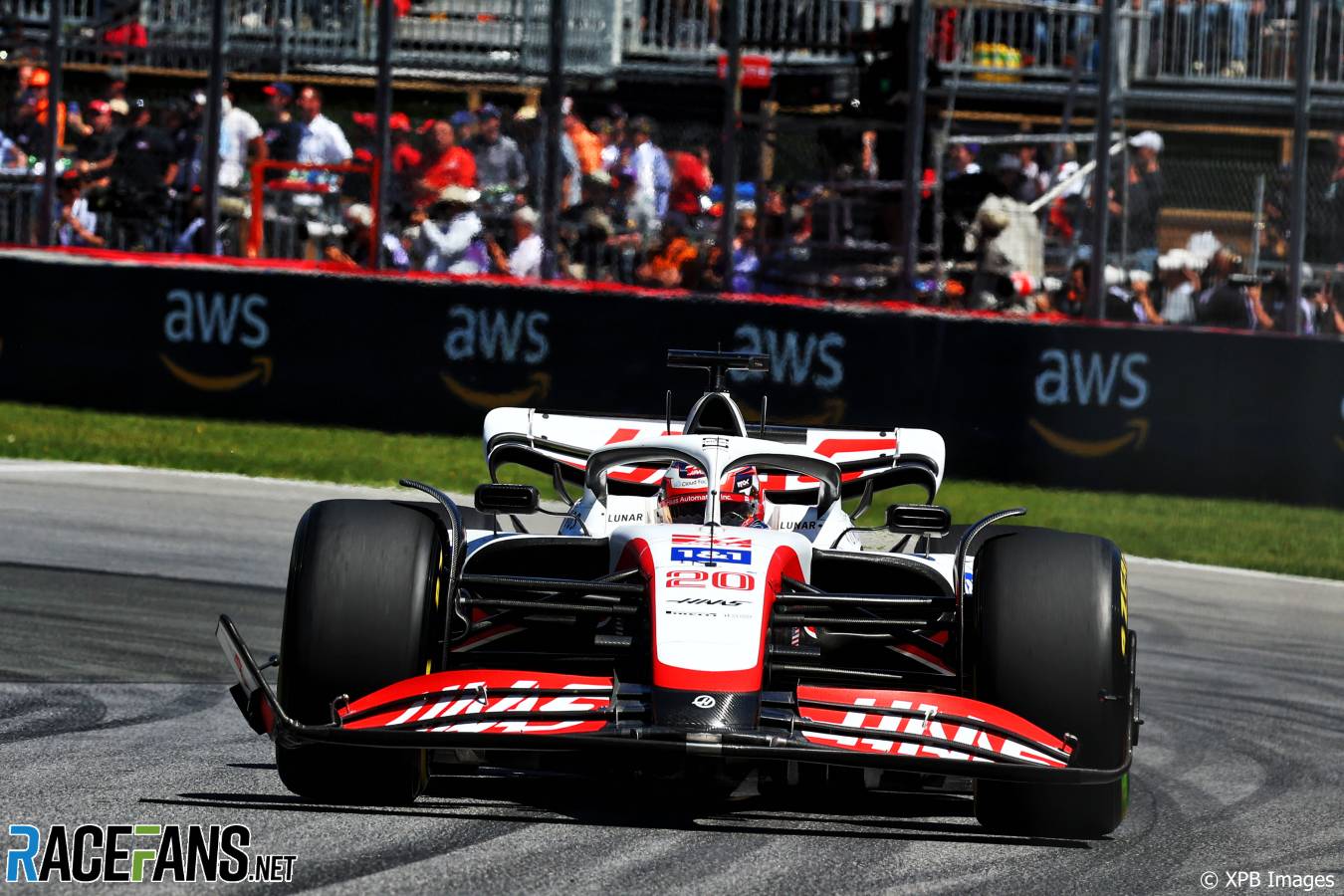 In the round-up: Kevin Magnussen believes there was no need for the race director to force him to pit for repairs to his car during the Canadian Grand Prix.

Being forced to pit for damage unnecessary, says Magnussen

Following minor contact with Lewis Hamilton in the opening laps of the Canadian Grand Prix, Magnussen was shown the black-and-orange flag, instructing him to pit to repair front wing damage. Having run in fifth place initially, he failed to return to the points-paying positions after the early pit stop.

“We were forced to pit with the damage we had but it was nothing,” Magnussen said after the race. “The car was perfect to drive, there was no effect on the car. This is normal, you’ve got to be able to finish the race with some scratches on your car.”

“It’s frustrating – it’s now four races or something where we haven’t scored points, so we want to get into the points again.”

Pietro Delli Guanti escaped injury after a horrifying crash during the Formula Regional European Championship race at Zandvoort on Sunday, in which his car was launched over a barrier.

Delli Guanti tangled with Esteban Masson at Hugenholtzboch. His car cleared the tyre barrier at the inside of the corner and landed on the grass near a marshalling post. The race was swiftly red-flagged.

Following the crash Delli Guanti was able to walk to the medical centre, where he was found to be in good condition.

The stewards ruled the collision was a racing incident. “Car 55 [Delli Guanti] went wide at the exit of turn one and lost speed. Car nine [Masson] came alongside him and contact was made.

“After hearing both parties and reviewing the onboard cameras, the stewards found that no driver was predominantly to blame. Fortunately, no one was seriously injured.”

Daniel Ricciardo, one of few F1 drivers still wearing a mask in the paddock, said he is being extra-cautious after contracting Covid-19 and missing the second pre-season test this year, he had no current health concerns but was being extra careful.

“I just don’t like people,” he joked, at first. “No, I’m alright. It’s more just honestly, a bit of jetlag and lack of sleep coming from Baku so naturally just feel a little bit low energy and probably just taking extra caution. But no, I’m fine.

“I’ve seen some people wear it and then that makes me put it on because I’m also like, ‘are you wearing it because you’re not well?’ So I’m kind of taking precautions over people who are probably just taking precautions. But other than a little bit of sleep deprivation, I’m ok.”

Another reason to love @LewisHamilton @MercedesAMGF1 is that he stopped and signed EVERY autograph requested of him. #CanadianGP #classact pic.twitter.com/HmjKSM1FMq

This year, FP1 for Formula E's #MarrakeshEPrix will be moved from Saturday morning to Friday afternoon.

On day 2, gates for the fans will only open halfway through the six-hour (!) break between quali and the race. Lights out planned at 1700 local time. 🇲🇦 #ABBFormulaE

I’ll never understand why people come to an F1 race to sit in a lounge area and watch it on a (small) TV. #f1 #formula1 pic.twitter.com/wWM9BYjdFt

@F1 @F1GPCanada another year another instance of being treated like livestock at #GPCanada dangerous conditions pic.twitter.com/kIj8bJsfqa

One witness said Mercedes boss Wolff 'lost his s***' while another reported that he went into 'full Abu Dhabi spec' — a reference to the Austrian's meltdown when Lewis Hamilton lost out on the title at the closing race in the Gulf last year.

This game replicates Pierre Gasly's pre-race ritual of catching tennis balls before the race start. Catch the tennis ball that drops by using the Left and Right arrow keys. You will score 1 point for every ball caught.

After Lewis Hamilton admitted that he had been tempted to take George Russell’s slick tyre gamble in Q3, Pete Baldwin says that the risk calculation by each driver summarises their seasons so far:

I think it mirrors what we’ve seen from the two all season so far. Hamilton is much more conservative whereas Russell is more likely to go for it. As the car isn’t out front, you have to take a bit of a gamble at times to get further forward and it’s a big part of the reason why Russell has been out-performing Lewis so far.

If they had a car that was the fastest, I think Hamilton would generally get the better of Russell as he’d be more consistent.
@petebaldwin