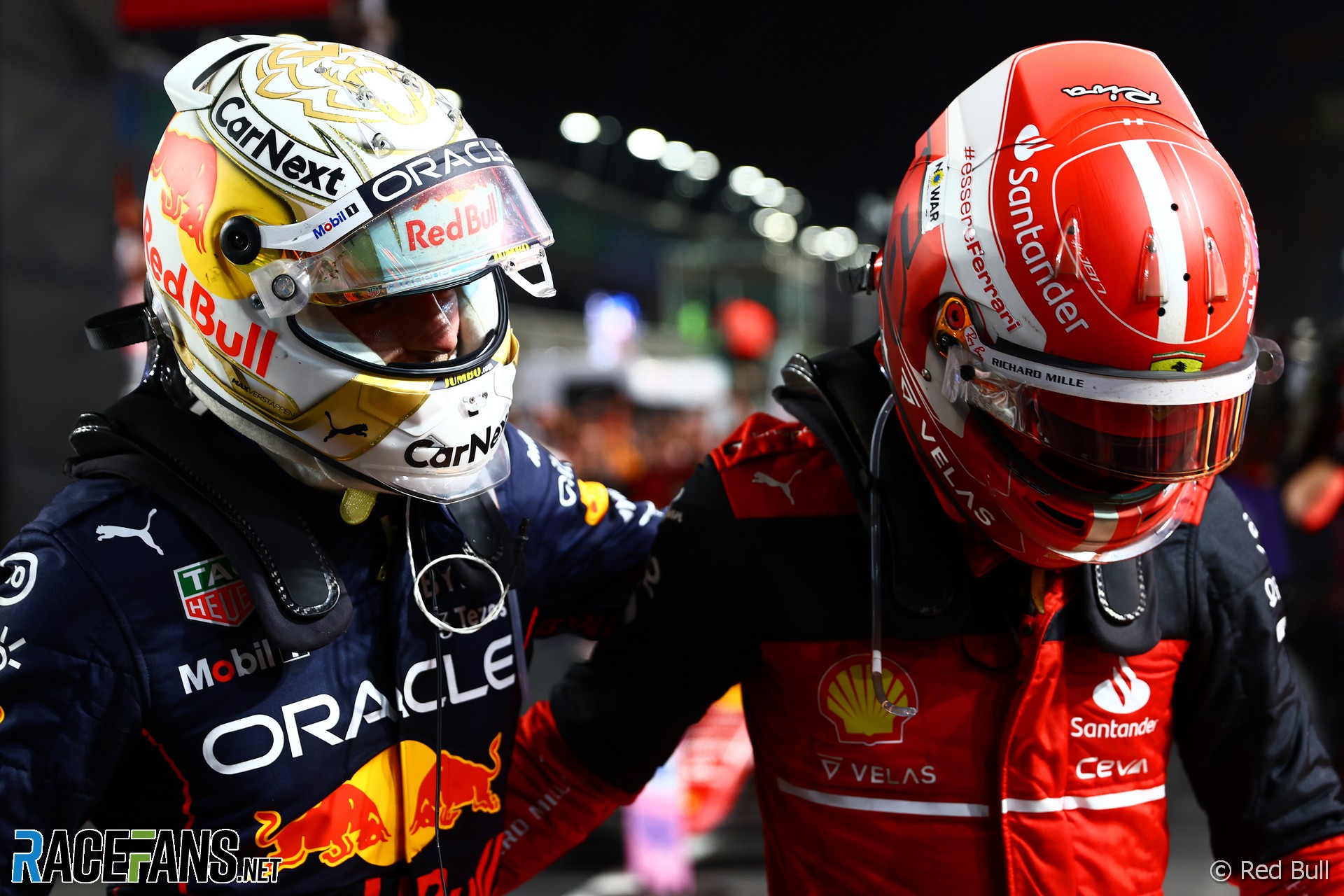 Three races into the season, Ferrari supporters had good reason to believe Charles Leclerc would deliver the first championship for one of their drivers in 15 years.

He’d opened his account with two wins and a second place, the latter a narrow defeat to Max Verstappen in Saudi Arabia. Red Bull suffered reliability problems in the other races which kept the champion from scoring.

At this early stage in proceedings, Leclerc was already 34 point clear of his closest rival, and Verstappen lagged 46 off the lead. But since then the situation has dramatically reversed.

Red Bull are undefeated in six straight races and Verstappen has built up an imposing lead. Meanwhile Leclerc has fallen to third in the standings, and may no longer be the driver Verstappen has to worry about the most.

Is Leclerc still the driver most capable of beating Verstappen to the championship, or is another rival emerging which represents a greater threat?

Going into the first season under F1’s drastically overhauled regulations, Perez hoped the complete reset in Red Bull’s design would help him find greater confidence at the wheel of their car. That has proved to be the case.

He’s narrowed the gap to Verstappen in qualifying and even took the first pole position of his career in Saudi Arabia, where his hopes of victory were dashed by the Safety Car. Another potential win passed him by in Spain, where Red Bull were quick to instruct him to let his team mate past after Verstappen spun, only for Perez to then lose time behind the team’s other car as it was plagued by a DRS fault.

So it’s fair to say Perez could be a little closer to his team mate with better luck. He and Verstappen have also had the same number of race-ending technical failures so far. But Perez’s hopes of catching and passing his team mate rest on being able to decisively out-race him each weekend in the same equipment. As Verstappen already leads him by six wins to one, that seems unlikely.

Over the past six races Leclerc has lost a whopping 95 points to Verstappen. How has that happened, and do the reasons offer any realistic hope of a turnaround?

Undoubtedly the greatest cause of Leclerc’s grief has been Ferrari’s unreliability. Not only have power unit failures cost him a nailed-on win in Spain and a likely one in Azerbaijan, but the consequent penalties compromised his race in Canada, where Ferrari were quick enough to win. He has lost more to unreliability than Verstappen, who also retired from two races, albeit while running second in both, and has not yet had any power unit penalties.

Ferrari compounded their car problems with poor strategy in Monaco (amplified by misfortune with traffic). Leclerc has also suffered by his own hand, however, spinning precious points away in Imola.

The strong card he can rely on is his dependably excellent one-lap pace which has made him a victory threat week-in, week-out. But he must start capitalising on it or his championship will soon be a lost cause.

Fourth place in the championship, just 15 points off Leclerc, is far higher than Russell should be. This impressive feat has come about for three reasons.

Russell has shown characteristic maturity in his first opportunity at a top team, particularly given the difficulties Mercedes face with their W13, and never failed to finish outside the top five. That is also credit to Mercedes’ reliability: Each of the drivers ahead of him in the points has had two retirements.

Clearly Russell has also benefited from Mercedes’ approach to solving the problems it has with the W13, and team mate Lewis Hamilton shouldering more of the burden of running experimental, sometimes quite radical set-up options.

But for Russell to be a championship contender, nothing less than an immediate and major breakthrough is required of Mercedes. As the series shifts away from the predominantly temporary circuits of recent races to the more traditional permanent venues coming up, they may find more tracks at which they can control their car’s ride better and improve their performance. Still, the leap they need to make is huge, and it will be a shock if they pull it off.

In contrast to Perez, Sainz found his form quickly at his new team last year, but made a shaky start to his second season as a Ferrari driver. However there are encouraging signs he’s put that behind him.

Sainz couldn’t measure up to Leclerc’s pace in the opening races, spun out early in Melbourne and succumbed to first-lap contact in Imola. That plus Ferrari unreliability in Azerbaijan badly dented his points-scoring.

He’s made patient progress in the meantime, gaining a feel for the F1-75’s lively rear end which his team mate clicked with so readily. He has been quick enough to win on occasions, such as in Monaco where he was egregiously impeded by a backmarker, and last weekend where he compromised his starting position with an error on his final qualifying lap.

Sainz’s Saturday form looks like the last detail he needs to fix to become a regular contender for wins. But a 73-point deficit to Verstappen puts him a long way out of contention, even with up to 372 points still available.

If Russell’s championship chances rest on the slim hope Mercedes are going to suddenly make a miracle breakthrough, the same goes for Hamilton only even more so. The driver who came within one controversial lap of securing a record-breaking eighth world championship last year is almost 100 points off the lead just nine races into 2022.

There’s no doubt we haven’t seen the best from Hamilton yet this year, his potential masked by a poor car and the aggressive development push to put it right. But even if it all comes good quickly a title push is surely too much to hope for. The best potential outcome for Hamilton this year may be that manages to avoid recording his first ever win-less season.

Is Verstappen’s biggest threat a driver?

The huge rises in costs all teams are facing this year has put several of them at risk of failing to meet the budget cap. Verstappen’s Red Bull team principal Christian Horner has been by far the most vocal on this subject, repeatedly urging the FIA to take action.

He has even raised the possibility it could have an impact on the championship. “None of us want to end up at the end of the season all rushing to courts of appeal in Paris saying ‘he spent a million dollars more than we did’ and so on,” Horner warned at the Monaco Grand Prix.

But while some teams have strongly opposed any moves to relax the cap, there have been signs in recent races that an arrangement will be made to account for the rising inflation which has increased many teams’ costs. Hopefully that will reduce the risk of an even more acrimonious end to the season than the last one.

Is Leclerc still Verstappen’s most significant opponent in the championship fight? Does he have one at all? Have your say in the comments.

39 comments on “Is a greater threat to Verstappen’s title hopes than Leclerc starting to appear?”