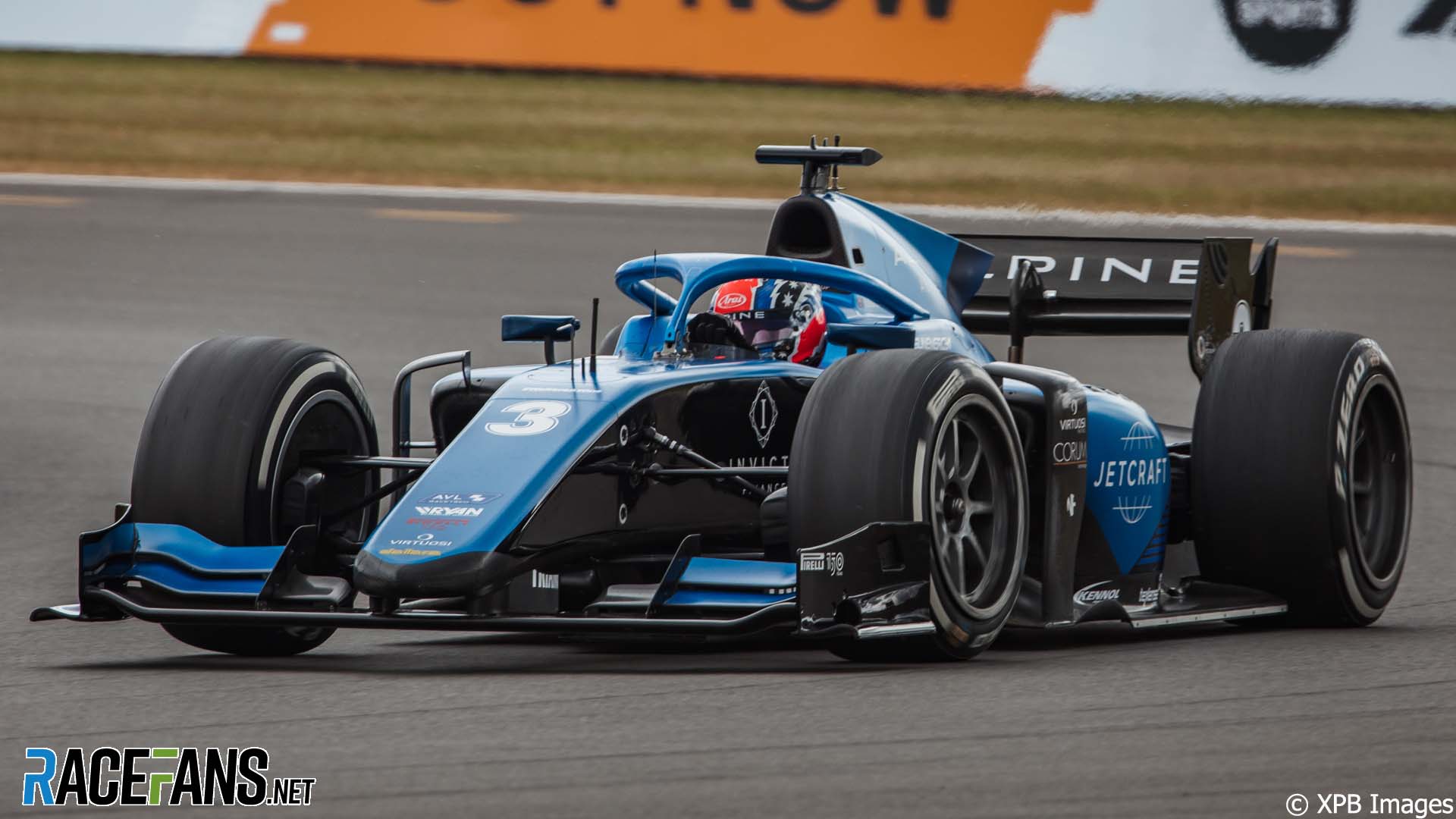 Jehan Daruvala had taken partially-reversed-grid pole for the sprint race, Enzo Fittipaldi lining up second and with Jüri Vips and Jack Doohan on the row behind them.

Ralph Boschung did not start the sprint race, having withdrawn once again due to persistent neck pain issues. He also missed the races in Barcelona and Monaco earlier in the season, but had been able to return in Baku.

Wet conditions resulted in a rolling start, with cars on extreme wet tyres – Formula 2’s only non-dry tyre option. Daruvala was able to get away cleanly from pole, with Fittipaldi following behind in second.

On lap two, Frederick Vesti and Felipe Drugovich fought side-by-side through Village and the Loop, then battled along the Wellington straight until Vesti made it stick through Luffield by holding the inside line.

Fittipaldi was able to sneak by Daruvala into the lead exiting Club at the end of lap five, with Doohan quickly following him through to demote the Red Bull junior down to third.

A mistake by Fittipaldi on lap eight saw him run wide into Abbey and Doohan easily claim the lead. Iwasa passed Fittipaldi as well, allowing Doohan to charge away and extend a three second lead by the start of the following lap.

Liam Lawson was forced to pit on lap eight for a new front wing, a race of damage control rapidly deteriorating for him. He took fresh wet tyres at the same time, in an effort to gain a tyre management advantage. Vips was issued a five-second time penalty for track limits violations on lap nine, while running seventh.

Theo Pourchaire passed Daruvala through Club, dropping the pole sitter’s position down to fifth on lap nine. Doohan continued to grow his lead, compounded by Fittipaldi dropping back from Iwasa to put an eight-second gap between the first and third cars.

By lap 15, drivers were visibly struggling to keep their wet tyres alive. Dennis Hauger found himself a sitting duck on the Wellington Straight as his grip deteriorated sharply and he lost tenth place to Marcus Armstrong.

Drugovich was able to take advantage of better tyre management, passing Vesti easily for sixth on lap 16. Lap 17 saw Pourchaire mount a serious challenge to Fittipaldi for third, despite both visibly struggling for grip.

The battle for sixth turned into a three-way bout between Daruvala trying to defend, Vesti attempting to force an error from him and Logan Sargeant waiting to pounce on both. Vesti managed to make the pass through Becketts, Sargeant making an attempt to also pass Daruvala through Stowe. The Prema driver briefly fought back, only to lose the place on the Hamilton Straight as Sargeant’s tyres proved to have more life in them.

By lap 19, Iwasa had managed to cut Doohan’s lead to two seconds, which he dug a further 1.2 seconds out of on the final lap. However, it was Doohan who crossed the line ahead, claiming his first Formula 2 win.

Fittipaldi followed Doohan and Iwasa across the line, with Pourchaire finishing just ahead of title rival Drugovich to claim fourth.

Drugovich therefore retains his lead in the title, with Pourchaire closing the gap between them by just one point, to be 48 points apart ahead of the Silverstone feature race.