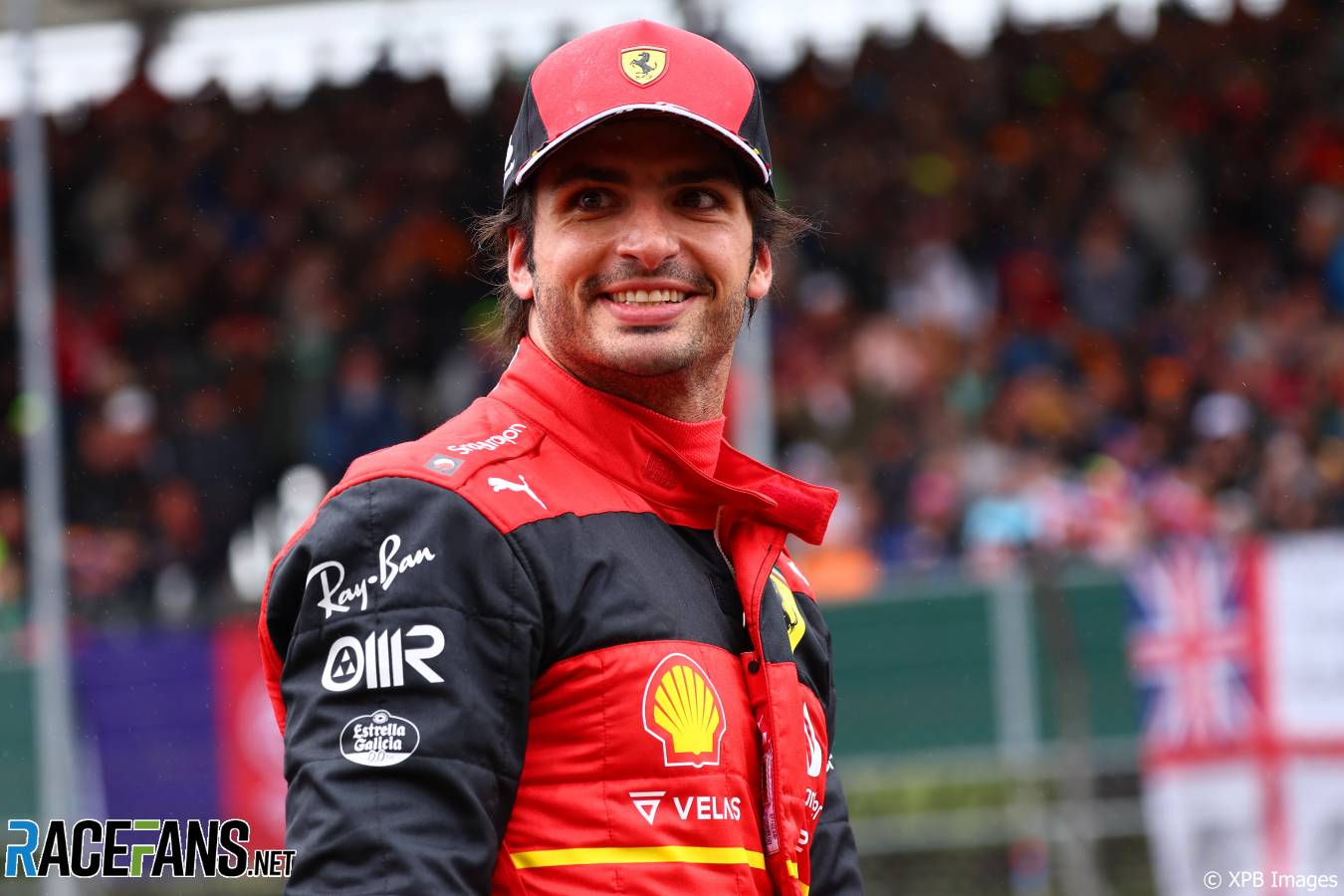 Carlos Sainz Jnr took his maiden Formula 1 pole position at the end of a wet qualifying session for the British Grand Prix.

Sainz made the best of his final qualifying lap as team mate Charles Leclerc spun at Chapel on his last effort to beat Max Verstappen to pole position. Leclerc will start third on the grid, while Sergio Perez will start fourth in the second Red Bull.

Less than ten minutes before the green light at the end of the pit lane signalled the start of qualifying, the rain that had threatened to arrived finally began falling around the circuit.

A queue of cars left the pit lane on intermediate tyres, with big rooster tails of spray protruding from cars as the drivers sought out the grip around the circuit. Max Verstappen was immediately quickest with a 1’45.743, before Charles Leclerc went over two seconds quicker to replace his rival at the top of the times.

The tricky conditions understandably created challenges for drivers. Valtteri Bottas spun at Vale corner on his first timed lap but managed to continue on his way after a brief yellow flag.

With around eight minutes of the session remaining, Lando Norris was warned that no further rain was expected for the remainder of Q1, opening up the possibility of the track drying out and improving in the final minutes. George Russell improved to go fastest overall, but he was quickly beaten by both Charles Leclerc and then Verstappen.

With five minutes of Q1 remaining, the drop zone consisted of the two Aston Martins of Lance Stroll and Sebastian Vettel, with Yuki Tsunoda, Daniel Ricciardo and Mick Schumacher also at risk of elimination.

Vettel improved to move out of danger into tenth, before Tsunoda also got himself into safe by jumping up to ninth. That moved Pierre Gasly and Nicholas Latifi into the drop zone. Ricciardo improved out of the drop zone into 13th, dropping Kevin Magnussen into the danger zone, while Latifi also moved into 11th, putting Tsunoda back into risk of elimination.

As time expired, Vettel improved to 15th, but was the first driver to take the chequered flag and powerless to prevent Gasly knocking him out, to the Aston Martin driver’s frustration. His team mate Stroll was eliminated in 20th and last, while the two Haas also could not do enough and were both knocked out in the bottom five.

Latifi managed to just avoid elimination in 15th to progress into Q2 for the first time this season. That came at the expense of team mate Alex Albon, who was 16th in the heavily revised Williams, and expressed his frustration at the team’s decision to instruct him to do cool-down laps when he felt he was lacking grip. Magnussen was eliminated in 17th, ahead Vettel, while Schumacher and Stroll will make up the back row of the grid.

The rain was continuing to spit down on the Silverstone crowd when the cars lined up at the end of the pit lane to begin the second phase of qualifying. The Williams of Latifi lead the 15 remaining cars out, ahead of the two Alfa Romeos of Bottas and Zhou Guanyu, followed by the AlphaTauris of Yuki Tsunoda and Gasly.

The intermediate tyre remained the preferred choice for all drivers on the still-wet surface throughout the session. After the first timed laps were completed, the Red Bulls of Verstappen and Perez were fastest, ahead of Zhou’s Alfa Romeo and the two Mercedes of Lewis Hamilton and Russell.

Norris jumped up to second place in the McLaren, before Leclerc took the top spot briefly as first Verstappen and Hamilton improved to go ahead of him. In the second Ferrari, Carlos Sainz Jnr moved fourth by setting a time three-and-a-half tenths off Leclerc’s personal best time.

Around half way through the session, the rain intensity began to increase and all drivers stopped improving their times. With five minutes remaining, the drop zone featured Gasly in 11th, Bottas in 12th and Tsunoda in 13th ahead of Ricciardo and the Alpine of Esteban Ocon in 15th. Meanwhile, Latifi sat half a second clear in safety in tenth place.

With drivers reporting that it was now raining harder, no one stood a chance of finding enough grip on the intermediate tyres to improve their times. As the final minutes ticked down, the conditions failed to improve, dooming all of those still in the drop zone to being eliminated.

That left Gasly as the first driver knocked out in 11th, with Bottas alongside him in 12th. Tsunoda will start 13th, ahead of Ricciardo and Ocon. Latifi survived to reach Q3 for the first time in his Formula 1 career.

The track was still wet when the crucial third phase of qualifying got underway, but it was not actively raining when the session began. The Ferraris of Sainz and Leclerc both queued at the end of the pit lane in order to be the first cars out onto the circuit, with everyone once again opting for intermediates.

Sainz was warned of possible rain towards the end of Q3, making it critical for drivers to make the most of their early laps. Leclerc went quickest of the two Ferraris after their first timed laps, before Zhou and Norris went faster than the pair of them.

Verstappen suffered a spin on the exit of Stowe, but managed to continue after rotating over 360 degrees. On his second effort, Verstappen managed to go second quickest despite appearing to run outside of track limits at Vale. It did not matter, however, as Verstappen improved on his next lap with a legitimate time to take provisional pole.

Despite the risk of more rain, times continued to improve. The Ferraris of Leclerc and Sainz improved to take first and second, before Verstappen went even faster to retake provisional pole by a quarter of a second.

As the chequered flag flew, Sainz improved to jump into provisional pole with a 1’40.983. Verstappen was next across the line but failed to improve by enough and stayed second, while Leclerc spun on his final lap at Chapel, ruining his chances.

Perez’s final lap was not an improvement, leaving Hamilton as the only driver left to take pole position. He improved, but only enough to take fifth place, confirming a career first pole position for Sainz.

Verstappen will therefore start alongside his former Toro Rosso team mate on the front row of the grid, ahead of Leclerc and Perez on the second row. Hamilton will line up with Norris behind him on the third row, with Fernando Alonso and Russell behind them. Zhou and Latifi will complete the top ten for tomorrow’s grid.