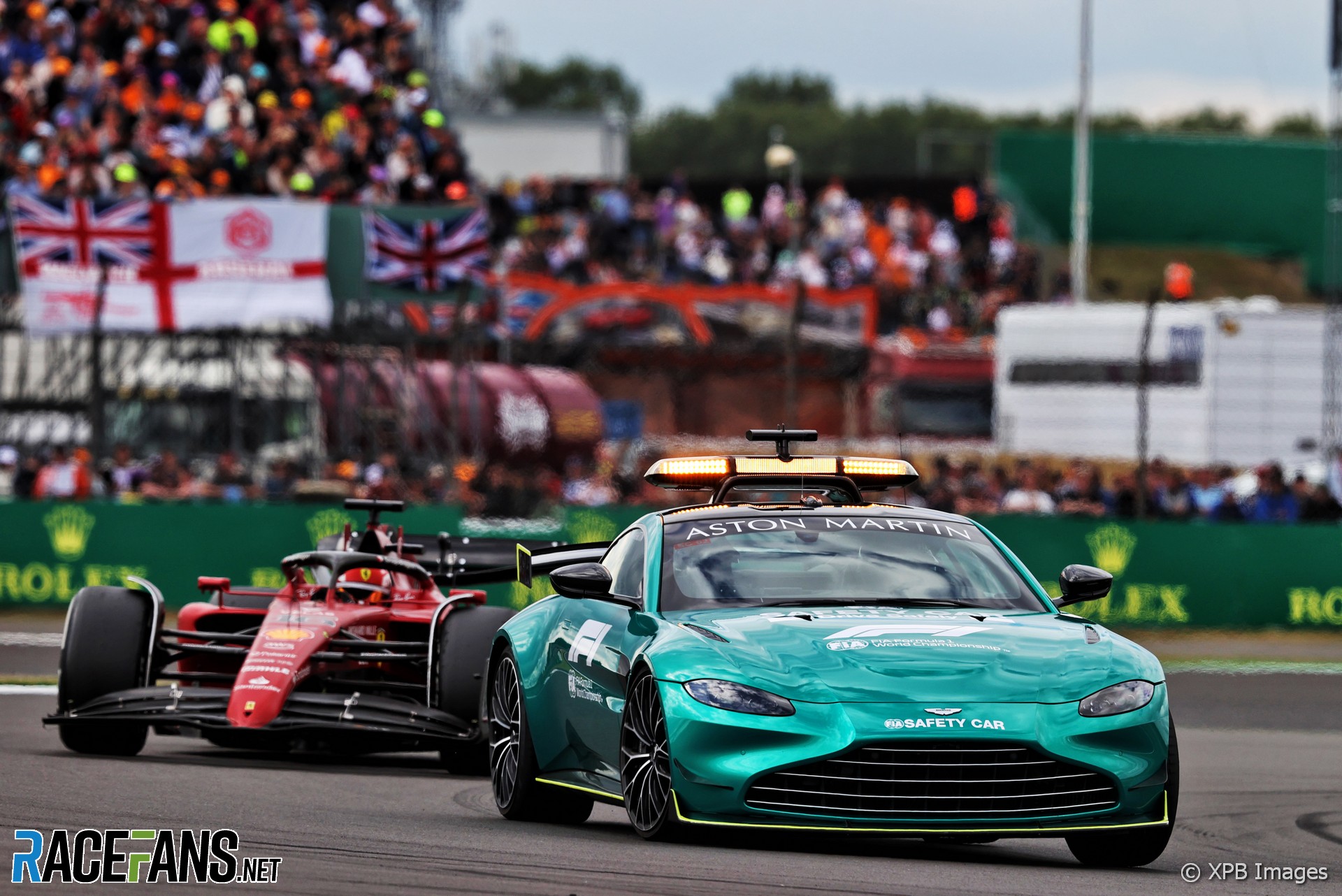 In the round-up: Ferrari team principal Mattia Binotto justifies the team’s decision not to pit Charles Leclerc under the Safety Car at the end of the British Grand Prix.

“Nothing unusual” in Ferrari’s Leclerc strategy

Ferrari chose to pit second-placed Carlos Sainz Jnr but not race leader Leclerc when the Safety Car was deployed towards the end of the British Grand Prix. Leclerc fell from first to fourth, passed by Sainz and two other drivers who pitted for fresh tyres.

Binotto said “it was common sense to prioritise the lead car by protecting track positions” at that point in the race. “There’s nothing unusual in this strategy, we always prioritise the lead car and therefore Charles in this situation. He was on fresher tyres at that point, and if he had pitted, our opponents would have done the exact opposite and gained track position on almost new hard tyres.”

“Just think of Lewis Hamilton at last year’s season finale in Abu Dhabi when he stayed out on track,” he added. Mercedes chose not to pit Hamilton from the lead during a late Safety Car period, a decision which cost them when the race was unexpectedly restarted in a manner which did not conform with the regulations.

“At the same time we decided to put Carlos on the opposite strategy in order to cover all opportunities,” Binotto added. “If we wouldn’t have done that split strategy, we would have risked losing the race and handing the win to our opponents.”

Hamilton was formally presented with the Mike Hawthorn trophy during the British Grand Prix weekend. It is the 11th time he has won the award, named after the first British driver to win the world championship, extending his record. It is given to the highest-placed British or Commonwealth driver in the world championship at the end of each season, a position currently occupied by his team mate George Russell.

Daniel Ricciardo said he was reminded of the track invasion at the 2003 British Grand Prix when he saw protesters on the circuit at Silverstone. Neil Horan, a former priest, ran onto the track during the race carrying a sign urging people to “read the bible”, shocking several drivers including Mark Webber.

Ricciardo said he saw the protesters out of “the corner of my eye” on the first lap of the race. “I think maybe they were wearing orange so I thought they were Max fans originally, or McLaren fans.”

“To be honest it made me think of that year with Webber and everything, got pretty close,” he said. “That was that was one of the thoughts I had. But otherwise I’m not sure what it was about.”

George Russell watching the restart. He looked visibly shook by that one. Said they wanted to restart as there wasn’t too much damage but checking on Zhou was the priority. By the time he got back to the car it was on the flatbed truck #F1 #BritishGP pic.twitter.com/CKmRGctF36

What the Zhou Guanyu incident did to Silverstone tarmac pic.twitter.com/fSSCuNAKgd

We have to remember that a test in a lab will never represent the real thing, crashes are very unpredictable and those load cases are usually based on the experience and available data with some safety margins.

You’re perfectly right! I do remember how many negative comments you received …

This was our view of THAT overtake Hamilton did on Perez and Leclerc into Club corner, everyone was out of their seats 🤩🍿 #F1 #BritishGP pic.twitter.com/2jqoqVNC9Q

Making history at Silverstone with a UK TV audience of more than one million viewers, our highest, EVER.#WSeriesSilverstone was the second most-watched motorsport event since 2014 outside of @F1!

One million views, one million thank yous to our fans.💜

'This sport has killed people I loved... but I have no fear': Ferrari superstar Leclerc (Daily Mail)

'The only things I felt guilty about putting the passing of my father and a friend out of my mind. But it was only for a couple of hours.'

'Aurea Carolina, Taliria Petrone and Vivi Reis, MPs for the left-wing Socialism and Liberty Party, have lodged a formal complaint with prosecutors in the capital Brasilia.'

'Cape Motorsports, one of the most successful race teams in the history of the Road to Indy driver development ladder system, announced Saturday that it has purchased two new Dallara IL-15 chassis with plans to contest the 2023 Indy Lights season.'

'I’ve been quite consistent lately around a sort of the backend of the top 10 finishing positions in Baku and Silverstone - building some consistency. We just need to get some extra pace from somewhere so that’s our target for the Red Bull Ring.'

'In that moment for me, no matter how painful it was - and it was so, so painful - just knowing there would be a kid watching... me shaking his hand just shows there is strength within regardless and I'm going to rise again.'

DaveW agrees with Red Bull team principal Christian Horner that Mercedes were too conservative with their strategy in the British Grand Prix:

I hate to admit it when Horner is just stirring the pot as usual, but he was right about Hamilton. Even Croft could see that running long and then gong for the sifts was the right play. The Ferraris were barely making up ground on him with their new tires. Playing for track position versus the offset was a losing proposition when the Mercedes lacks top speed.

Maybe that would be all moot due to the last Safety Car. But if he stayed in the lead at the time of the Safety Car and then pitted even to mediums from the lead he probably wins the race ahead of the squabbling Ferraris trying to fend off Pérez.
DaveW (@dmw)