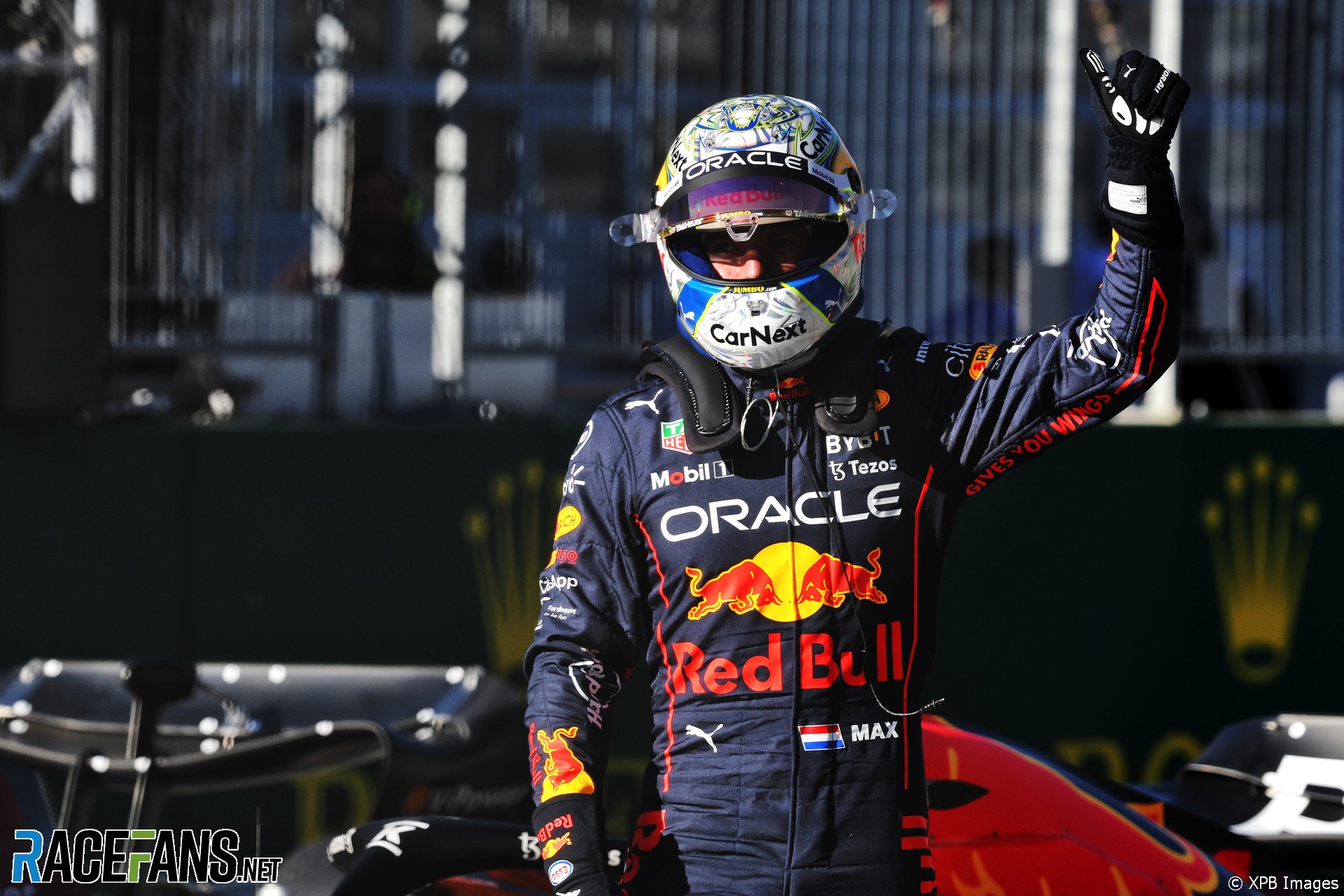 The Red Bull driver finished fastest in qualifying for the third consecutive event at the Red Bull Ring, with both Ferraris of Leclerc and Carlos Sainz Jnr lining up ahead of Sergio Perez for Saturday’s sprint race.

Mercedes drivers Lewis Hamilton and George Russell crashed out of Q3 after losing the rear of their Mercedes in separate incidents. Russell qualified fifth with Hamilton falling to tenth.

Friday qualifying started under bright blue skies, with air temperatures hovering just under 20C as drivers took to the circuit for the opening phase.

The two Ferrari drivers Carlos Sainz Jnr and Charles Leclerc set the early pace during the early runs, the British Grand Prix winner ahead of his team mate on a 1’06.363. However, the stewards deleted Sainz’s time for exceeding track limits on the exit of the final corner. As per F1’s rules, he also lost his subsequent effortas a result. He was far from the only driver to be caught out in this way.

With 10 minutes remaining, Max Verstappen took to the track for his first flying lap and jumped to the top of the times with a 1’06.097. But he became the next driver to have a time deleted for exceeding track limits at the final corner, and his second attempt along with it.

Eventually, with five minutes to go, Verstappen set a legal lap of a 1’05.852, but that was then beaten immediately by the two Ferraris of Leclerc and Sainz, who went quicker by over four tenths of a second.

Stroll improved to 15th, dropping Daniel Ricciardo into danger in 16th place. Zhou improved, but only enough to go 17th. Albon moved into safety with a lap good enough for 13th, putting Yuki Tsunoda at risk of elimination. Tsunoda improved to 12th, dropping team mate Pierre Gasly into 15th. That left Ricciardo starting at a likely elimination, and hs final effort was not good enough: He was knocked out by just 0.024 seconds, Gasly the last driver to survive.

Stroll improved his lap time but failed to better his position, while Vettel could only manage 17th, leaving the two Aston Martins out in the first phase for the second weekend in succession. Vettel’s final lap was then deleted for track limits at turn one, dropping him down to 20th and last. Ricciardo, Stroll, Zhou Guanyu, Latifi and Vettel were therefore the first five drivers to be eliminated from qualifying.

Ferrari and Red Bull wasted no time getting out onto the circuit as the second session of qualifying began, with Leclerc ahead of Verstappen out on the road, with Sainz followed by Perez behind.

Norris made a mistake at turn four, running wide and ruining his first flying lap. The McLaren driver bailed out and was passed by Leclerc, who was the first of the leaders to complete his lap, setting a 1’05.744. That was immediately beaten by Verstappen, who went quickest of all by over two tenths of a second, with Sainz behind his Ferrari team mate after his first effort.

The two Mercedes of Lewis Hamilton and George Russell indicated they might be in contention for pole position for the first time this year when they completed their first efforts. Hamilton beat Verstappen by three-hundredths of a second to move to the top of the times. Russell jumped into third after his first effort, splitting Verstappen and Leclerc.

Norris’s second flying lap attempt was also ruined by a mistake, this time at turn one, which saw the McLaren run wide and onto the run off. Perez went eighth with a 1’06.273, but he was stripped of his time for running too wide at the penultimate corner, dropping him down to 11th place.

With just over five minutes left in the session, Perez was the first driver at risk of elimination in 11th, with Albon, Gasly, Tsunoda and Norris the other four drivers who had to improve in order to avoid missing out on Q3.

Norris was the first driver in danger to head back out onto the track, but another untidy lap with apparent braking problems saw him kick up gravel on the exit of turn six. That left the McLaren only 13th, until his time was deleted yet again for breaching track limits at turn seven, dropping him to last of the 15 runners.

Gasly improved to tenth, still on the bubble of elimination but knocking Valtteri Bottas into the drop zone as a result. Perez managed to string a lap to move sixth, knocking Gasly back down into the drop zone. Alex Albon improved but only to 12th, leaving him eliminated. Tsunoda’s final effort was rendered worthless when he almost spun at turn one, running off the track.

As the chequered flag flew, Gasly was the first driver eliminated, with Albon in 12th and Bottas out in 13th. Tsunoda was also knocked out in 14th ahead of Norris 15th. However as Q3 began the stewards announced Perez was under investigation for a track limits violation at turn eight, despite his place in the top 10 already being secured.

As the green lights illuminated at the end of the pit lane to signal the start of the final shoot-out for Friday qualifying for the Austrian Grand Prix, none of the 10 remaining drivers seemed eager to take to the track and chose to happily remain in the pits for the opening minutes of the session.

When the drivers did eventually ventured out, Hamilton abandoned his first push lap and pulled aside before the final corner to allow Leclerc past him. Leclerc set provisional pole with a 1’05.183, a tenth ahead of Ferrari team mate Sainz.

Then it was Red Bull’s turn to set their first flying laps, with Verstappen pipping Leclerc to provisional pole by just under a tenth of a second. Perez could only manage fourth, three tenths of a second slower than his team mate, with Russell going fifth fastest for Mercedes.

After giving up on his first attempt, Hamilton was a quarter of a second off Verstappen’s best lap through the first two sectors of his second push lap. However, Hamilton lost the rear of his Mercedes through turn seven and speared off over the gravel and into the barriers, immediately ending his session and bringing out the red flags.

Hamilton managed to climb out of his car unassisted, with clear damage to the right-hand side of his car. The session was suspended for 10 minutes while Hamilton’s car was removed from the tyre barrier, eventually resuming with just over five minutes remaining.

Russell was the first driver back out on track and had a clear circuit with which to try and improve his lap time and was up at the end of the second sector. However, he appeared to run wide on the exit of the penultimate corner and over the serrated kerbs. As he turned into the final corner, Russell lost the rear of the car and spun, causing him to skid backwards into the outside tyre wall.

For the second time, the session was red-flagged due to a crashed Mercedes, forcing all of the drivers who had just taken to the circuit back into the pit lane. Russell made his way back to the pits by crossing over the track. The stewards subsequently announced he will be investigated for entering the track without permission after the end of qualifying, a rule Vettel transgressed in Australia earlier this year.

Once the second Mercedes had been cleared, the final two-and-a-half minutes of Q3 finally began. All eight remaining drivers took to the track, with Leclerc choosing to go out alone and Verstappen leading team mate Perez at the back of the queue.

Leclerc was the first of the contenders over the line and jumped to provisional pole with a 1’05.013. Sainz was next across the line, but was five hundredths of a second slower than his team mate.

That left the door open for Verstappen, who promptly lowered the benchmark to a 1’04.984, snatching provisional pole from Leclerc by just 0.029s. Perez was the final driver with a chance of taking pole, but he failed to improve on his fourth place, ensuring sprint race pole position for the championship leader.

Leclerc and Sainz will line up behind Verstappen for Saturday’s sprint race, with Perez behind Sainz on the second row. Despite crashing, Russell qualified in fifth just behind Perez.

Esteban Ocon secured ‘best of the rest’ honours of sixth ahead of the two Haas drivers of Kevin Magnussen and Mick Schumacher. Fernando Alonso took ninth place for Alpine, with Hamilton dropping to tenth at the end of the session following his earlier accident.