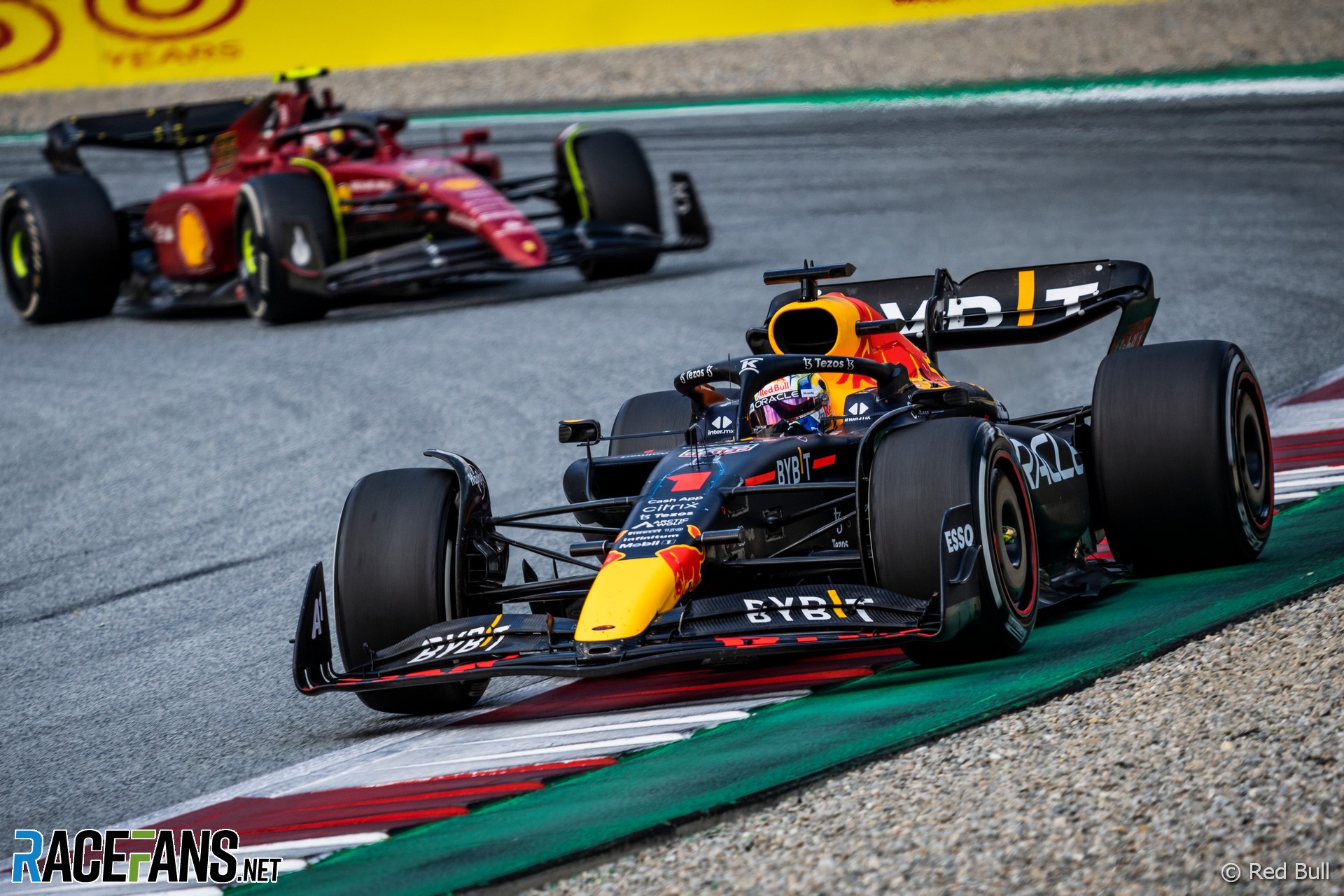 In the round-up: A technical directive set to address porpoising may not require any adaptations on Red Bull’s car, according to Christian Horner.

Red Bull may not need to make changes for porpoising directive

A new FIA technical directive which will come into force from the Belgian Grand Prix will prevent teams using trick skid blocks on their cars, according to Mercedes team principal Toto Wolff.

However his opposite number at Red Bull, Christian Horner, indicated they will not be affected by this clarification of the rules. “From what I’m told, I’m not even sure whether we need to make any adaptation,” he said after Sunday’s Austrian Grand Prix.

The technical directive was originally due to come into force in the next round at Paul Ricard.

Binotto could not watch final laps of Austrian Grand Prix

Ferrari team principal Mattia Binotto was so concerned about reliability of Charles Leclerc’s car during the final laps of the Austrian Grand Prix, that he could not watch.

The team’s other car, driven by Carlos Sainz Jnr, had already dropped out with a power unit failure when race leader Leclerc began to experience problems with his throttle.

“I have to admit, I was very nervous, disappointed as well for what happened to Carlos,” Binotto told media including RaceFans. “So nervous that I stopped watching the race in the last few laps.”

Formula 2’s Austrian feature race started in mixed conditions, with drivers having to pick between slick and extreme wet tyres, without the option of intermediates.

Logan Sargeant, who started third and finishing there before being promoted to victory, made the call for full wets and instantly regretted it.

“I sort of had a I had a hunch that I thought the slicks would be better,” he admitted. “But it’s difficult when you’re starting third. Everyone around you is on wets. If you make that call to go to slicks, you could you could ruin the race for you and the whole team.

“So we stuck with it. It obviously didn’t go my way, I did get mad when I was pretty much in last but just a phenomenal stop by the crew and then it was coming through like a train for the first half of my stint.”

Sargeant realised he was on the wrong tyre from the formation lap. “I knew it was pretty much a given that we were we were going to be in reverse and I was optimistic that maybe we could hold on till the pit window. The safety car, I believe, as well, helped us. We could keep the tyres cool.

“Obviously the outcome is good considering the strategy call.”

Formula 1 will collaborate with Santander to promote its Countdown to Zero competition, as well as contributing F1 personnel to the judging panel. The competition will be promoted on F1’s social and digital platforms, which will also be used to draw attention to wider sustainability initiatives the two will collaborate on.

This moment last week was so cute 🥰How would you react if it was you? 😄 pic.twitter.com/W9NcUFnCSm

My fiancee has a hidden disability and the security at @SilverstoneUK refused us entry to the #BritishGP. Both security guards we spoke to openly mocked her and made a number of inappropriate comments.

They are investigating the issue but it shouldn't have happened. https://t.co/eyaJJMA8Pu

A Brazilian judge on Monday ordered an investigation be opened into allegations that retired Formula 1 driver Nelson Piquet used racist and homophobic slurs about Lewis Hamilton. The 69-year-old Piquet made the comments in interviews filmed in November, which only came to wider attention late in June.

Generally he is this year, albeit very much pushing the limits in his defence against Mick Schumacher the week before at Silverstone. I remember commenting in Jeddah last year Michael Schumacher's, and to an extent Ayrton Senna's amazing legacies are partly diminished by some dirty driving, and that Max would do well to avoid that career reputation.

Ferrari's reliability fix for failures which hit Leclerc in Azerbaijan and Sainz in Austria will arrive at the Belgian or Italian grand prix.

'The mid-race pace of Nakamura Berta was the best of anyone once he got into third behind Giltaire, who had started seventh and followed Powell up the order early on, but there wasn’t enough of a pace difference for an overtake. Nakamura Berta sat less than three tenths of a second behind lap after lap, but Giltaire was strong enough at the penultimate corner to deny any opportunities at one of the best overtaking spots – that is until he waved him through.

Willing – and capable – of competing successfully in all manner of motorsport events – from Sebring 12 hours to Goodwood Revivals, Smith topped out her career behind the wheel in 2017 when she became the oldest person (79) to drive a current specification Formula 1 car – as she successfully tested the works Renault Sport F1 car at Circuit Paul Ricard in southern France.

Interesting, in the 2015 MSA championship, Lando was first, Colton – who was a year younger – was third.

Colton had a slow start in the season, but slightly out-scored Lando in the second part of the season, in which they were both equal on wins with four each, but Colton had more other podium finishes (six to four).

That shows what kind of talent Herta is for all of you who don’t follow IndyCar, whilst Lando Norris is currently considered one of F1’s biggest talents

Also, Herta is currently 10th in the IndyCar standings, racing in his fourth season there, with everybody on pretty much equal machinery. Shows you the level of talent in IndyCar.

Lando is seventh in the F1 standings, for what it’s worth.
Amian