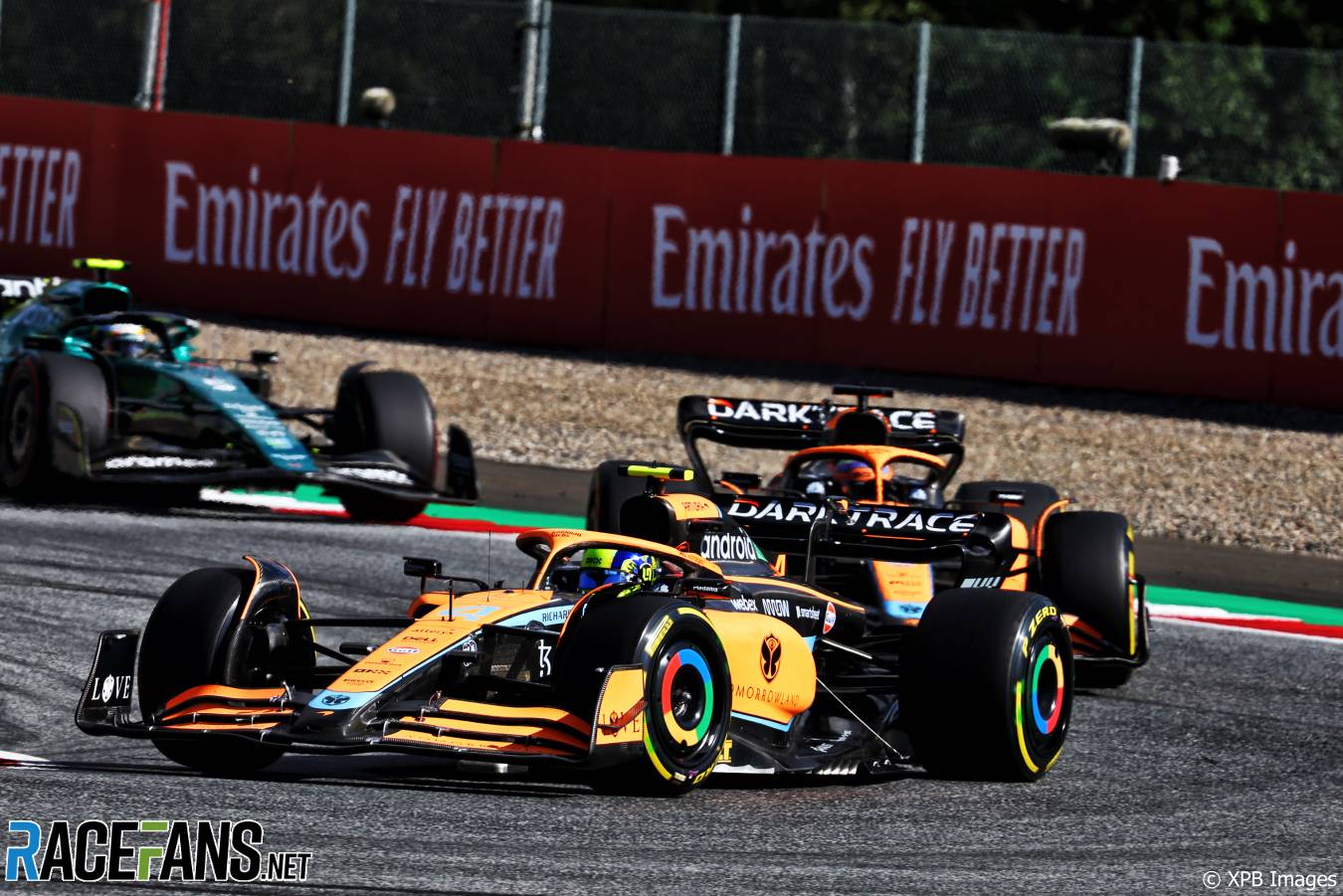 In the round-up: Lando Norris says that the lack of different strategies in sprint races makes them ‘not the most exciting’.

After the second sprint event of the season in Austria, Norris said that although the short races have generally worked out well for McLaren, their flat-out nature doesn’t always make for good racing.

“In general they’ve just been good for us. We’ve always gone forward, I think, in every single one,” said Norris. “I wouldn’t say they’re the most exciting because they’re just like at a period where you can almost push flat-out the whole time and therefore there’s not as much tyre deg and things like that between teams for much to happen.

“When you push flat-out it’s harder to do something different to the cars ahead,” he explained. “Especially when, in qualifying you’re split by a tenth. You’re not going to be able to do anything at all.

“But obviously the only people you could overtake were people who are out of position. So people who crashed or people who got disqualified in qualifying.

“Half the time I think will be exciting and good and then half the time not as exciting,” Norris concluded. “But every now and then it’s all something different. Which I don’t mind.”

Valtteri Bottas expects the next updates for his Alfa Romeo will be introduced at the Hungarian Grand Prix at the “earliest”.

Alfa Romeo sit sixth in the constructors’ championship on 51 ahead of Haas, having gone scoreless over the last two rounds in Britain and Austria.

“I think some teams clearly have made progress like, for example, Williams,” said Bottas in response to a question from RaceFans. “[Last] weekend they seemed better than they have been. Alpine, McLaren were a little bit faster than us, but that was not the case in Silverstone – so we need to keep progressing, otherwise we’re going to fall back.”

Asked if there were any upgrades planned for the coming races, Bottas said “I don’t think so. I hope so, but I think earliest will be Budapest.”

Today, we welcomed four teams from the @aramco @F1inSchoolsHQ World Finals for a tour of our @AstonMartinF1 factory in Silverstone. 💚

These aspiring young minds met with our engineers to hear about their journeys into #F1 and learn how they can do the same! pic.twitter.com/vNxHXWwNui

Obviously this one is close to my heart. Really hoping we see change. These stories of harassment are not isolated issues for women, it’s what we deal with on a daily basis. #F1 #AustrianGP https://t.co/gw6XPNZhRx

What a day, beeing kind of fired in the morning by Flavio, rescued by Pat Symonds from those politics, to bring the car to P3 (annoying)… there would be MUCH more to say about that day(s)… a bit of it I dissclosed in this podcast for @F1: https://t.co/rnudfAYXvk https://t.co/pPCIR2yr4d

Well…that's too funny. Want to guess which two #IndyCar teams were on the same charter flight from Indy to Toronto…yep, AMSP and CGR.

The good thing here is the men and women who work on the cars are tight and friendly, so there's no drama to be found among the crews.

‘It’s always been his dream’: Piastri itches for F1 debut as Ricciardo digs in (The Age)

"It has happened before where they thought he was going to race. They told me the Thursday night before Monaco it was looking like he was going to race, and they said get on a plane. I booked all the flights and was ready to go, and then it didn’t happen."

"Formula One has determined to make a full time commitment here. The area that will be the pits during the race will actually be a Formula One experience during the other 11 months of the year," said Chair Jim Gibson of the Clark County Commission, who also sits on the LVCVA Board."

Keanu Reeves to Host Formula One Docuseries For Disney Plus (Variety)

"Keanu Reeves is working on a documentary about Formula One for Disney Plus, Variety has learned. The as-yet-untitled four-part docuseries will reportedly focus on Formula 1 managing director Ross Brawn, who in 2009 bought the Honda team, renamed it Brawn GP and took it to two unprecedented championship victories."

After a long pandemic hiatus, IndyCar finally returns to the streets of Toronto (National Post)

"F1 is its own entity and competition, but if it puts more eyeballs on the IndyCar Series, I think it will only benefit the events and the promoters in the series. At the end of the day, this competition in this this series is very close, right?"

"In F1, you see the people involved in the pit stops and those on the pit wall, but you don't see all the people who are working to design and make the car. It's very much the same for me. I had 10 people with me for the climb up Mount Kilimanjaro, but you didn't see the sports people who were getting me physically prepared – doing strength and conditioning work and altitude training."

"Whether it's the mountain-lined backdrop, the overtaking opportunities, the absolute army of you that always show up, or the double-points, Spielberg is one of those places we simply never get tired of."

"In the second of our F1 Manager behind the scenes we take you through the process we used to capture an authentic likeness of all 20 F1 drivers, featuring Alex Albon and Zhou Guanyu."

Given that last season really encouraged a tribal element akin to football, this is sadly an inevitable consequence. One of the best things about being an F1 fan is that you don’t have to have such a loyally and just enjoy the spectacle as a complete neutral.

When you look at just how incredible the crowd was at Silverstone this year, especially when compared to the behaviour of England fans at last year’s Euro final, it was something I’d always explain as one of the reasons F1 is sometimes better than football.

Now we appear to be losing that distinction, which really saddens me.
Stephen H

Happy birthday to Jv and Ridzki!