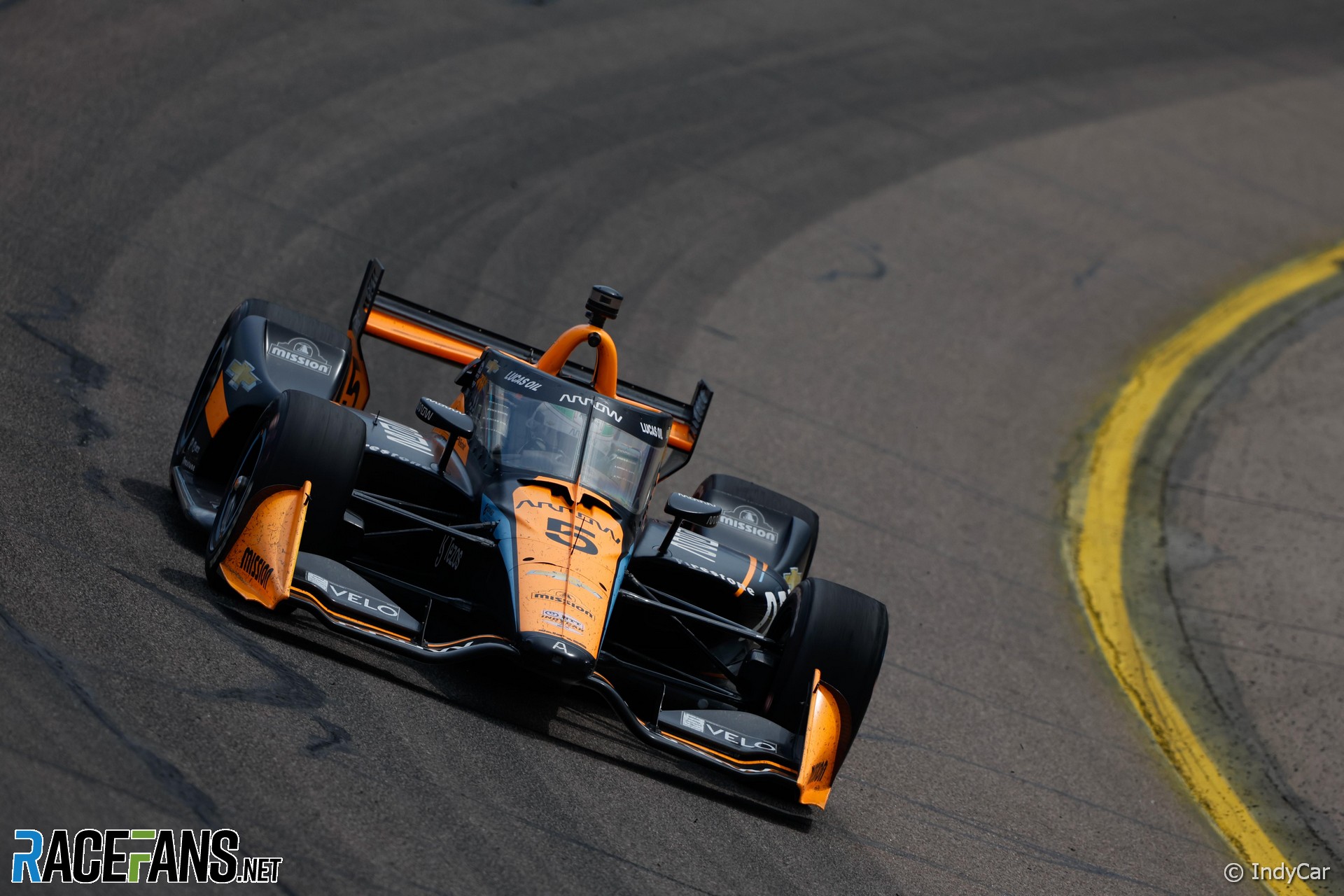 Pato O’Ward took his second win of the season in the second, 300-lap race at Iowa Speedway after Josef Newgarden crashed out of the lead.

After leading 148 laps, Newgarden looked on course to claim a clean sweep of both wins at the short oval. But his race came to an abrupt end when his car suddenly snapped away from him at the exit of turn four on lap 236, sending him into the wall.

Newgarden was unhurt, but was distraught after his unexpected accident which cost him the opportunity to take the lead in the championship standings. He was credited with 24th place.

But one driver’s misfortune became another’s potential season-saver. O’Ward took the top spot, held his lead after the final restart, and began pulling away from second placed Will Power gradually as the laps ticked down. He went on to win the race by over four seconds.

And after a win and a second place finish in this weekend’s Iowa double-header, O’Ward’s championship chances – which looked remote after consecutive retirements at Road America and Mid-Ohio – have been refired. With five races left, O’Ward is now within 36 points of points leader Marcus Ericsson, who had another strong day and finished sixth.

Power, who led 80 of the first 83 laps from pole position, finished in second and he gained ground in the standings after two podiums in one weekend. The 2014 series champion is now just eight points behind Ericsson, second in the table.

Before the first caution of the race, when Kyle Kirkwood hit the wall at turn two, Power and Newgarden were running first and second at a searing pace, at one point all bar the two drivers closest to them a lap down.

Scott McLaughlin bounced back from yesterday’s misfortune with a loose wheel, to finish in third place behind his senior Penske team mate.

Following them were a trio of Chip Ganassi Racing cars: Scott Dixon in fourth and Jimmie Johnson with a career-best fifth place after overtaking Ericsson, who came in sixth. Alex Palou finished just outside the top ten, in 11th.

Felix Rosenqvist was seventh, rookie David Malukas recorded his best career finish in eighth. Ninth-placed Romain Grosjean was the first of the Andretti drivers, followed by Takuma Sato in tenth.

The top six in the IndyCar standings are now covered by 44 points with five races remaining: Ericsson, Power, Newgarden, Dixon, O’Ward, and Palou.

It’ll be a quick turnaround for the next race, the season’s second race on the Indianapolis Motor Speedway road course, which is part of a joint weekend with the NASCAR Cup Series. Colton Herta won the spring race around the Indy road course earlier this year.