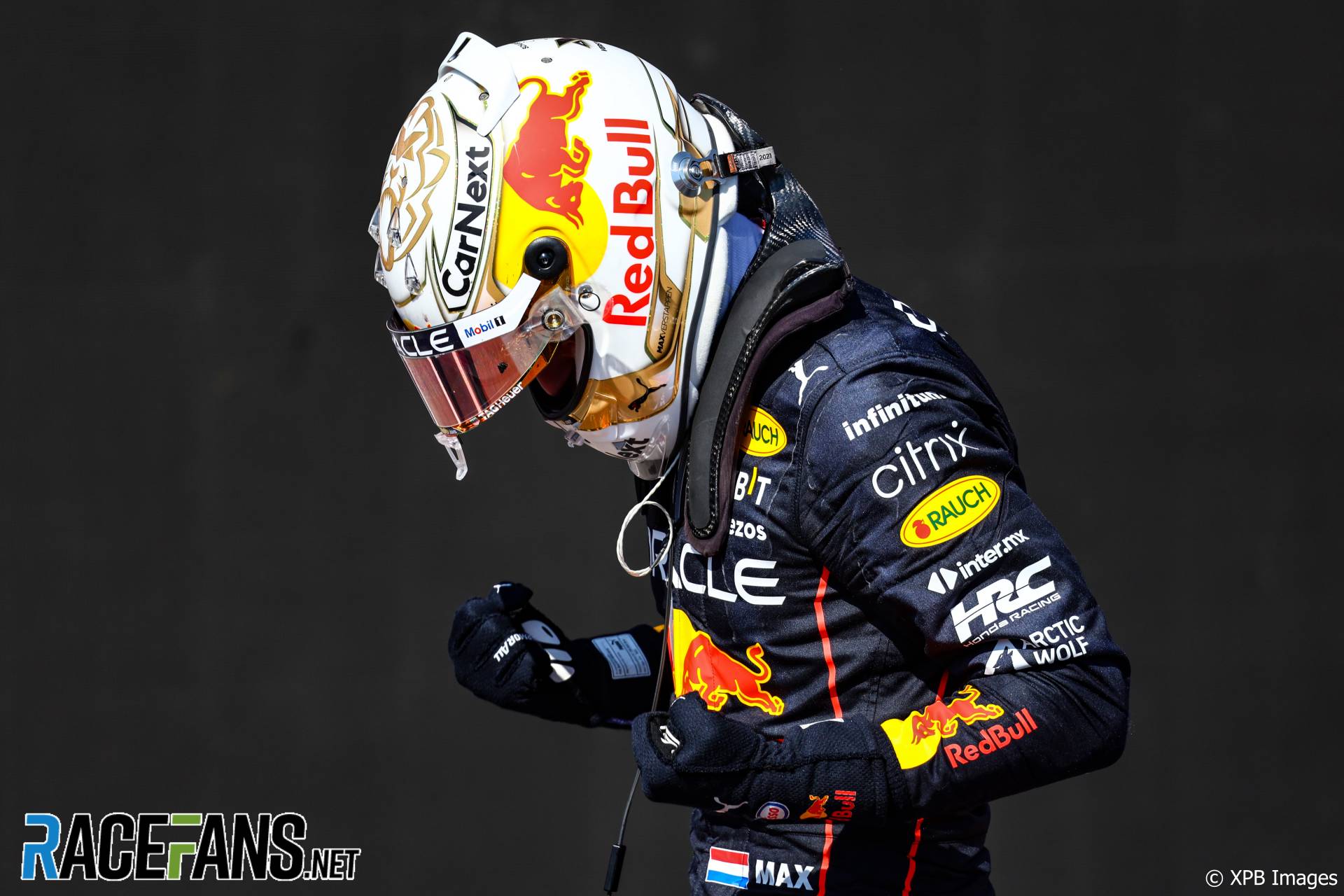 Max Verstappen won the French Grand Prix at Paul Ricard after Charles Leclerc spun out and crashed while leading the race.

The two front row starters battled in the opening stint of the race, Leclerc holding off Verstappen. However, Leclerc spun at the Beusset right-hander and crashed out of the race, handing the lead to Verstappen, which he never relinquished.

Conditions were perfect as the field lined up on the grid for what appears to be the final French Grand Prix for the foreseeable future. When the lights went out, Leclerc and Verstappen made similarly good starts, Leclerc holding the lead through the first corner.

Behind, Hamilton jumped ahead of Perez into third place, while Lando Norris fell behind both Fernando Alonso and George Russell to seventh.

Back in the pack, Esteban Ocon and Yuki Tsunoda made contact in the chicane on the Mistral Straight, sending the AlphaTauri into a spin and dropping him to the read of the field. Having started from the back of the grid, Kevin Magnussen gained seven places to jump up to 13th by the end of the first lap.

Leclerc led out front while both he and Verstappen quickly dropped Hamilton and the rest of the pack behind them. When DRS was activated on the third lap, Verstappen used the overtaking aid to stick close to the Ferrari driver, but was unable to get enough of a slipstream to have a look at the lead.

On lap six, Leclerc made a slight mistake in the chicane and allowed Verstappen to get a run on the approach to Signes. Verstappen followed closely and tried to make a move around the outside of Beausset, but Sainz held his line and kept the lead of the race.

After his attack was repelled, Verstappen backed off from the rear of the Ferrari. He fell to around two seconds off the leader before Red Bull called him into the pits at the end of lap 16. After fitting a set of hard tyres, he rejoined in seventh place behind Norris, but quickly overtook the McLaren.

On lap 17, Leclerc suddenly lost control of his car through Beausset and spun into the tyre wall, reporting a stuck throttle on his car. He later confirmed the error and been his, which explained he deep scream of frustration on the radio before he climbed out of his car.

The Safety Car was deployed, prompting a flurry of activity in the pit lane. Hamilton and Perez both pitted, with Russell double-stacking behind his Mercedes team mate, all three switching to hard tyres. Sainz also pitted for medium tyres, but failed to leave the pit box when released. Eventually, Sainz got going, but right in the path of Alexander Albon, who had to slam on the brakes to avoid hitting the Ferrari. Sainz was later handed a five second time penalty for an unsafe release.

Having already pitted, Verstappen stayed out and collected the Safety Car with the lead. Hamilton inherited second place, still ahead of Perez in third. Russell ran fourth, ahead of Alonso and the two McLarens of Norris and Daniel Ricciardo, with Sainz eighth on fresh medium tyres.

The race restarted at the start of lap 21, with Sainz immediately passing Ricciardo for seventh place before passing sixth-placed Norris before the Mistral Chicane. One lap later, Sainz disposed of Alonso for fifth in the same manner he had overtaken Norris.

Zhou Guanyu made contact with Mick Schumacher at Beausset, pitching the Haas into a spin. Schumacher managed to continue with a slightly damaged car and Zhou was handed a five-second time penalty for the collision.

As Verstappen slowly pulled away from Hamilton out front, Sainz caught Russell’s Mercedes, eventually passing him around the outside into Signes. Then he set his sights on catching Perez for third, but appeared unable to get close enough to the Red Bull to attempt a pass.

After debating with Ferrari whether to pit, Sainz eventually got a run on the Red Bull into Signes, the pair running side-by-side but Perez successfully held off the Ferrari. However, Sainz lunged down the inside of Perez into the final corner to move into third.

Despite now being in clear air, Ferrari opted to pit Sainz with just over 10 laps remaining for a second set of mediums. After serving his time penalty, Sainz rejoined in ninth place, but with a lot of time to make up.

Russell and Perez clashed at the chicane battling over third place, with Perez taking to the escape road and keeping the position. Russell was incensed, adamant Perez should return the position, but the stewards did not deem the incident as worthy of investigation.

Sainz passed Norris for sixth, then overtook Alonso around the outside of Beausset for fifth place. However, Sainz was too far behind from Russell and Perez ahead to close down the gap before the chequered flag.

With less than five laps remaining, Zhou’s Alfa Romeo came to a stop at the exit of turn six. The Virtual Safety Car was deployed while Zhou’s car was cleared, but once the track was safe the Virtual Safety Car was not lifted for a extended amount of time. Once the green flags did eventually fly, Russell got an immediate jump on Perez through turn 13, taking third place from the Red Bull. Perez tried to fight back, but was unable to counter Russell’s well-timed restart.

With a 10 second lead out front, Verstappen cruised over the remaining laps to cross the line and claim a comfortable seventh victory of the season. Hamilton took second place, with Russell a further six second behind to complete Mercedes’ first double podium of the season.

Perez finished fourth, less than a second behind Russell, with Sainz taking fifth and the fastest lap 11 seconds adrift of the Red Bull. Alonso finished sixth, ahead of Norris, Ocon and Ricciardo. On the final lap, the two Aston Martins of Lance Stroll and Sebastian Vettel battled over the final points-paying position, with Stroll successfully holding off his team mate to take the final point.