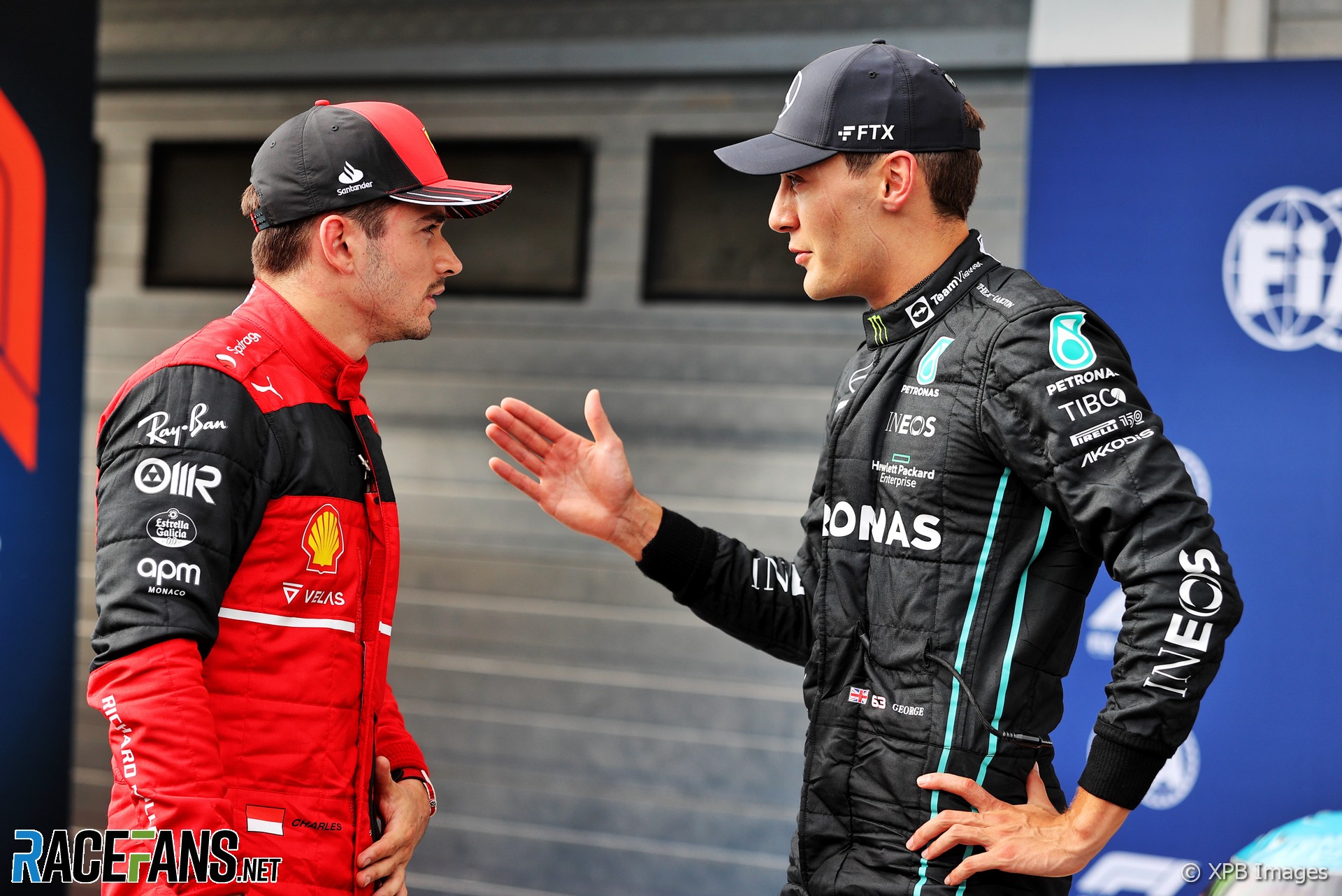 In the round-up: George Russell is rated higher than Charles Leclerc in the latest patch for the official F1 racing game.

Russell moves ahead of Leclerc in latest F1 22 driver ratings

Two months since the original driver ratings for F1 22 were revealed, the game makers have updated the values for the 20 drivers. Among the notable changes in version 1.09 George Russell is now rated higher than Charles Leclerc while Max Verstappen has become the highest-rated driver in the field outright.

Developers Codemasters have lowered Leclerc’s rating from 92 overall to 91, with a one point reduction in awareness following his crash in the French Grand Prix and a three-point drop in his pace rating.

Russell has gained two in his rating to move to 92 overall, putting him as the third highest driver in the field behind Lewis Hamilton and Max Verstappen, who is now rated as a 95 overall.

The latest F1 22 patch includes fixes to an automatic gearbox glitch that was introduced in an earlier patch and a fix to tyre temperatures being excessive cold for players who skip the formation lap. F1 22 will also officially launch crossplay functionality – permitting players to race against each others on different platforms – later this week.

Former FOM chief Bernie Ecclestone pleased not guilty at a magistrates court in Westminster to charges of fraud following an investigation by the British government tax office, the Guardian reports.

Ecclestone is charged with failing to declare a trust in Singapore worth £549m between 2013 and 2016, during which time he was still head of Formula 1 Management. He was granted unconditional bail and will appear at Southwark crown court on 19th September.

Zendeli steps in for banned Caldwell

Campos Racing have confirmed Lirim Zendeli will step into Oliver Caldwell’s seat for the Formula 2 round at Spa-Francorchamps this weekend.

Caldwell has been banned from participating in this weekend’s event after accruing 12 penalty points on his licence over the first ten rounds of the championship. He will be replaced by 22-year-old German driver Zendeli, who raced in last year’s F2 championship, before Caldwell returns the following weekend in Zandvoort.

“I’m very excited and happy to be racing a Formula 2 car again,” said Zendeli. “It’s been a year now since my last time in F2 and I’m looking forward to this experience.”

Recharged, refreshed, and ready to fully attack this second part of the season with my team. 💪🏼 Busy triple-header coming up with mighty Spa up first. Allez @AlpineF1Team 💙 pic.twitter.com/UUhydsdkTv

It’s been a pleasure to be part of your team this year. Merci @JaguarRacing 👊🏻 pic.twitter.com/b4Ulc1g1Jf

"I think what has really killed my first half of the season has been the DNFs, to be honest. Without those DNFs my championship would have looked a lot different to what it is now. But overall, I think there are a lot of positives to take already from this half season. Still, it’s a very long season."

"I had a good line there but everybody seemed to come to the left, unfortunately. I had no time to react. The first impact, somebody hit the tyre or the wheel and the wheel spun and something’s wrong with the wrist, but that’s how it goes."

"When Formula 1 superstar Hamilton joined the Walton-Penner group that won the bidding war for the Denver Broncos, plenty of fans were puzzled. After all, Hamilton is a Brit whose love of football is rooted in what Americans call soccer, as opposed to the variation played by Russell Wilson and company."

"The engineers, I think that's quite a clear thing that they help you with racing and they help you to get the points that are wrong. It’s the same with every racing driver. I think it's so important to have a good relationship with your engineers. I think it’s helped me a lot because I was a very shy guy in the past within the team, but then kept getting better and better over the years."

"Alain Prost because I think he was the smartest driver ever to race. I admire that about him, his thinking about the points all the time. I’m not that type of driver but it’s quite impressive."

Chasing The Dream | Episode 2: The Boy From Brazil | Season 4 (Formula 2 via YouTube)

"Brazilian racer Felipe Drugovich currently leads the Formula 2 championship! This latest episode of Chasing The Dream follows his path to how he got to this position..."

With Andretti announcing plans to build a multi-million dollar new racing headquarters in Indiana, @bernasaurus thinks it’s ludicrous that their potential entry into Formula 1 should even be in question at all…

Oh, just let them in already. I don’t believe in the ‘dilution fee’ at all. I think Minardi, Simtek, Forti et al, all brought something to the sport with ideas, jobs and opportunities. Many at the top now got there because of opportunities in very small teams. *Looking at you Newey and Brawn.

They might be successful. The facility looks like it might be better than a few current teams, perhaps that is the biggest threat? I think the idea that the current teams have a hegemony on entry might serve them in the short term, but in long run, I think the sport will suffer.

If I could run the 100m in 9.8 seconds, but couldn’t because I had to pay 10,000 to the other competitors because I might harm their earnings, I would ask whether you could call it a ‘sport’.
Bernasaurus

Happy birthday to Innim and Tomas!