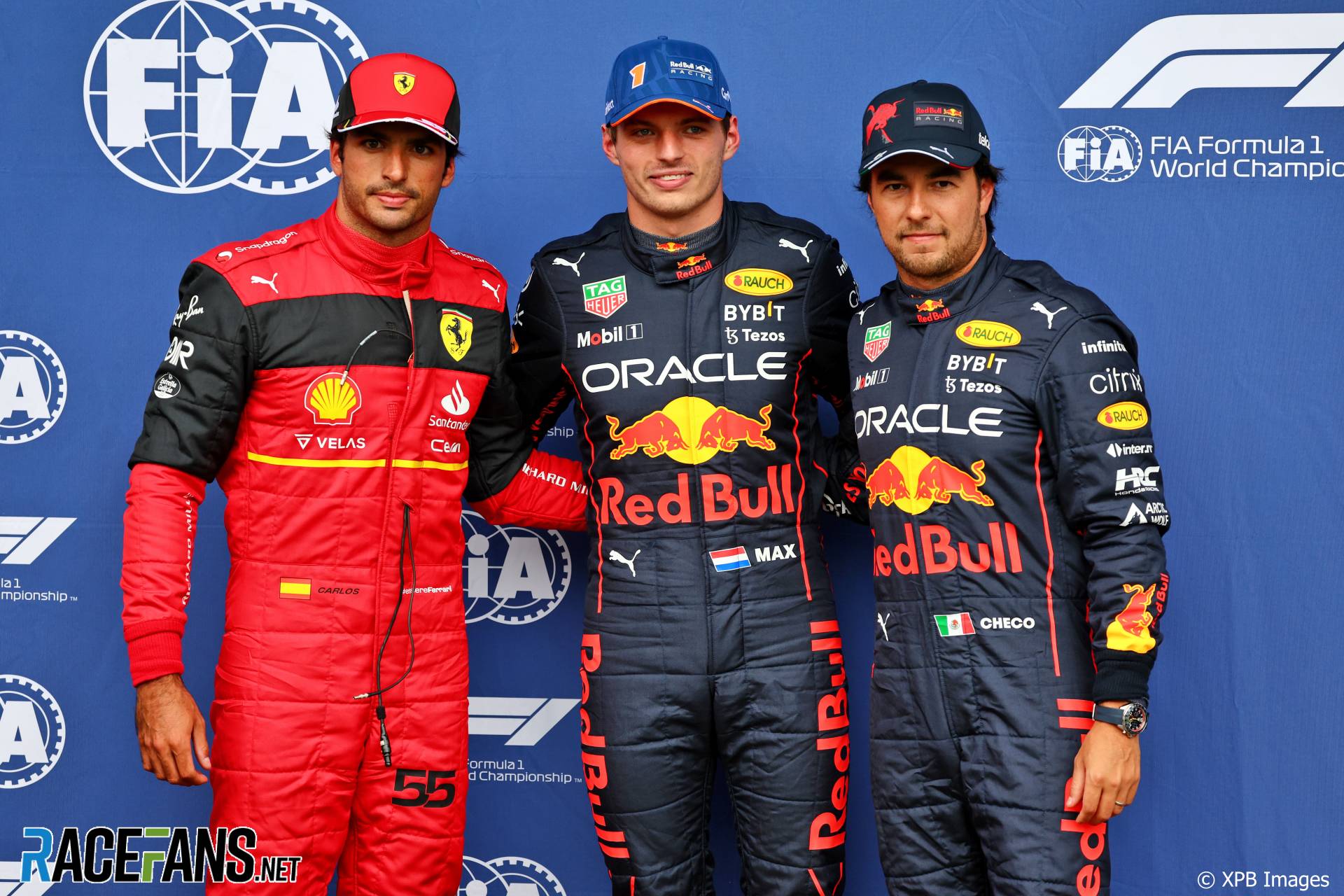 Max Verstappen was quickest in qualifying at Spa but his grid penalty means Carlos Sainz Jnr will start from pole position for the Belgian Grand Prix.

The Red Bull driver’s best time of a 1’43.665 was easily fast enough for him to end Q3 quickest by six tenths of a second, but power unit penalty will demote him to 15th on the grid for the race. Sergio Perez will start alongside Sainz on the front row, with Fernando Alonso behind them in third.

Charles Leclerc will begin the race directly behind Verstappen in 16th position after he managed the fourth-fastest time in the final session of qualifying.

The start of the first session of qualifying was delayed due to an accident at Fagnes at the end of the Porsche Supercup qualifying session that left the barriers in need of repair. When the session eventually started 25 minutes late, a clear, dry track awaited drivers with air temperature at a cool 15C.

Nicholas Latifi was the first driver out on track, but he returned to the pit lane immediately. Lewis Hamilton was the first of the front-runners to set a time, setting a 1’46.703 which was easily beaten by his team mate. The Red Bulls and Ferraris also took to the track, with Max Verstappen instantly setting the fastest time of the weekend with a 1’44.581, half a second ahead of Carlos Sainz Jnr in and eight tenths quicker than team mate Sergio Perez.

The Red Bull pair and Sainz pitted after a single flying lap, while Charles Leclerc and the two Mercedes drivers remained out for a second hot lap. George Russell could only manage tenth, while Lewis Hamilton was 11th after their first run.

After a brief lull, cars began to venture out for a second run with four minutes remaining. The two Alfa Romeos of Zhou Guanyu and Valtteri Bottas were at the bottom of the times, with Mick Schumacher, Nicholas Latifi and Lance Stroll set to be eliminated from the session, while Yuki Tsunoda was the first driver at risk of being knocked into the drop zone. Both Mercedes headed back out onto the track, while Red Bull and Ferrari chose to keep their cars in the garage for the final minutes.

Latifi was the first across the line, moving up to 13th, with Stroll also going safe in 10th. Zhou improved, knocking Alexander Albon into the drop zone, while Latifi also fell back to 17th and out of the session. However Albon shot up to sixth place, splitting the Mercedes pair, securing his place in Q2. Kevin Magnussen and Sebastian Vettel therefore fell into danger as neither of them improved by enough on their final laps to go safe.

That meant that Vettel was the first driver eliminated, by a mere two-thousandths of a second, with Latifi also failing to progress. Magnussen could not get through and was eliminated in 18th, while Tsunoda locked up at the final chicane on his final lap and was out in 19th. Valtteri Bottas was the final driver out in 20th, but as things stand is set to start from at 14th place due to the grid penalties his rivals have collected this weekend.

Mercedes sent both their cars out onto the circuit straight away as the second phase of qualifying began, with Verstappen, Sainz and Perez following behind. All four took to the track on a used set of softs, except for Perez who took a fresh set for his first run in Q2.

Hamilton’s first lap of a 1’46.662 was quickly beaten by Russell, before Verstappen went a second-and-a-half faster to easily go quickest. Despite his fresher tyres, Perez was almost a tenth of a second slower than his team mate, while Sainz’s first lap was only good enough for third, almost seven tenths behind Verstappen.

Leclerc made his first run after his rivals, but despite a slipstream from his team mate, he could only manage sixth with his first timed lap. The Ferrari driver ended upalmost a second slower than Verstappen, while complaining of his car bouncing in slower corners.

The track fell silent as drivers recovered to the pit lane. Daniel Ricciardo was bottom of the times having not set a flying lap in the first half of the session, with Schumacher, Stroll, Zhou and Albon sat in the drop zone as the clocked ticked to under five minutes remaining.

It took until just over three minutes left for the drivers to take to the track, with only the two Red Bulls remaining in the garage. McLaren and Alpine both set themselves up to arrange slipstreams for their cars, Esteban Ocon giving Fernando Alonso a tow down the Kemmel Straight and Lando Norris providing the same service for Ricciardo.

Zhou improved to ninth to push Hamilton into the drop zone, with Ricciardo taking advantage of a tow to temporarily go safe. However, Hamilton and Russell improved to go fifth and sixth respectively, as did Albon, who set purple mini-sectors on his final run to squeeze into the top ten in tenth.

That meant that Ricciardo fell out in 11th place, while Gasly also dropped out in 12th. Zhou was 13th and eliminated, with Stroll and Schumacher the last drivers to be eliminated in the second session.

The battle for pole position was an unusual one, with two of the main protagonists due to start from the back of the grid due to their penalties. Nonetheless they and their team mates headed out to contest Q3, the two Red Bulls leaving first, Perez ahead Verstappen.

Perez’s first time was a 1’44.462, which was blitzed by his team mate by seven tenths of a second. Sainz had the benefit of a tow from team mate Leclerc but his first time was still six tenths slower than the championship leader. It was then Leclerc’s turn to put in his first lap, but he was told by his Ferrari team that they had accidentally given him a used set of soft tyres. Despite the lack of fresh rubber, Leclerc still went fourth-fastest.

For the final runs, Verstappen remained in the pit lane, leaving Perez to take his final run without a tow. Sainz began his final timed effort with his team mate emerging from the pit lane in front of him, allowing him the benefit of a slipstream through the Kemmel Straight. However, a poor first sector and a mistake exiting Fagnes meant Sainz did not improve on his final effort.

Perez was not able to take advantage of Sainz’s mistake and remained third. Verstappen therefore ended the session quickest, meaning he will start from 15th on the grid for tomorrow’s race, with Sainz gaining pole position and Perez alongside him on the front row.

Ricciardo, Gasly, Stroll and Vettel will all move into the top 10 on the grid courtesy of penalties ahead.