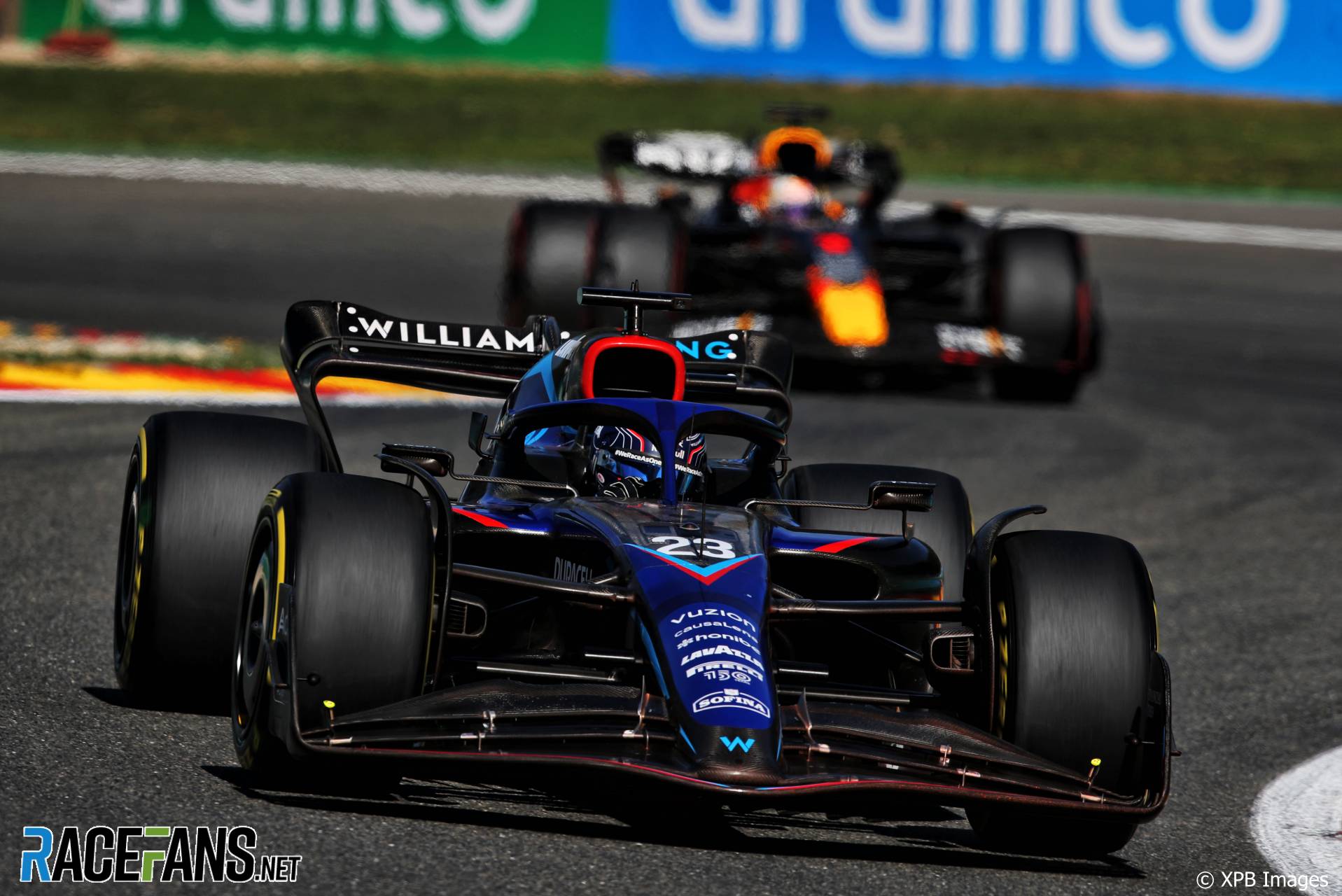 Alexander Albon said his run to 10th place in the Belgian Grand Prix by managing his tyres while leading a train of rivals was one of his best drives in Formula 1.

The Williams driver started the Belgian Grand Prix sixth after several drivers who qualified ahead were given penalties. He ran a two-stop strategy, going from medium tyres to hards and back to mediums, and successfully kept his Williams in the top 10.

“It was a tricky one out there,” Albon reflected. “After the start, I was like, ‘it’s gonna be a long race.’ I could already feel it on the laps to grid, that the degradation was going to be really high.

“It was amazing how the track temp just made the tyres struggle that much more. Pirelli have a very high minimum pressure limit and it just really doesn’t suit us with the downforce set-up that we had in the car,” he explained.

“In sector two there was a lot of [tyre] management but at the same time I couldn’t manage much by the end of that race and we were holding on.”

Albon believes he delivered one of his best performances to date. “It was, in my opinion, one of the best races I’ve had in Formula 1,” he said.

“It felt like that last stint, just holding on and couldn’t make any mistakes, obviously, or else we were going to get passed straight away. But the top speed saved us a little bit and I’m glad I saw the chequered flag.”

He kept a queue of five drivers behind at the end of the race – Lance Stroll, Lando Norris, Yuki Tsunoda, Zhou Guanyu and Daniel Ricciardo. “The more I saw, the better I felt,” he said, “because I was like ‘the train’s forming, that’s nice, that means everyone’s got a bit of pressure themselves.’

“When it’s just you and a car behind, they can afford to drop back, they can come back at you, do different things. But when you have a train, everyone has to follow the speed and they can’t afford to cool the tyres down, the brakes or whatever it may be. So when I saw the train, I was like, ‘yeah, good, bring it on.'”

Compared to his previous points finishes for Williams, in Melbourne and Miami, Albon said that 10th at Spa felt more significant because it was “almost a pure race.”

“Maybe it wasn’t my best race, but it felt like it was considering what we had and the pace that we had today, to get a point was a really good job,” he continued. “It’s great for the team and for everyone, that’s the positivity that we need to take on with us into the next few races.

“I think it gives us a good confidence going into Monza and these low downforce tracks, we can do a good job.”