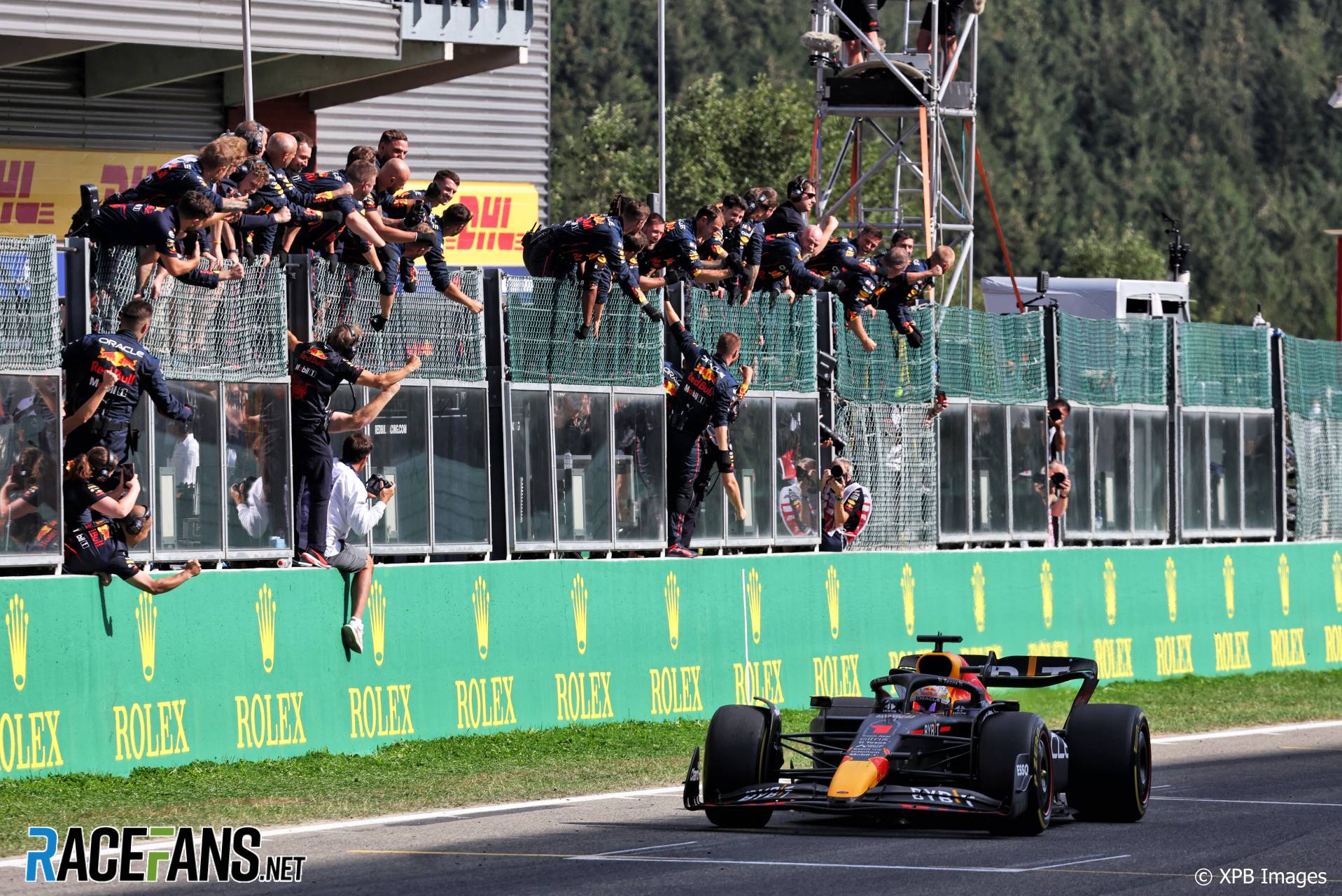 Red Bull’s performance in the Belgian Grand Prix was on a par with the team’s peak dominance when it won a string of world championships between 2010 and 2013, said Christian Horner.

Max Verstappen won today’s race despite starting from 14th on the grid. He had been fastest in qualifying by six-tenths of a second but was moved towards the rear of the field due to a penalty for exceeding his limit of power unit components.

Red Bull expected the Spa-Francorchamps to suit the RB18, but nonetheless their performance was even stronger than they expected, said Horner.

“I think the circuit played to our strengths,” he said. “We’ve got a very efficient car, we’ve found a very good set-up. Max has just been in phenomenal form since the very first lap in [practice].

“Obviously, strategically, we took we chose to take the [power unit] penalty here and 14th became the 13th, technically, starting point with every everybody else so many penalties being taken. But of course Max still had to navigate his way through the pack and he did that very efficiently over the first couple of laps.”

Verstappen “hit the front far quicker than we could have ever expected”, Horner admitted after the team decided to start the race on the soft tyre compound.

“The soft tyre seemed to work for him very well as well in that first stint. So thereafter the pace that we had with both Max and Checo was enough to easily pass Carlos and bring home probably one of the most dominant performances that we’ve had as a team since 2010 or 2013. I think it’s right up there with that period.

“I don’t think we’ve ever won a race starting from 14th on the grid. So as I say, a phenomenal performance.”

“A lot of credit has to go into the people behind the scenes,” Horner added. “Because what you see here is obviously the end product and the drivers obviously having to optimise that to the best, but it’s what goes on behind the scenes and all the unsung heroes back in Milton Keynes that are doing a tremendous job with this car.”

The speed with which Verstappen reached the front of the field far exceeded Red Bull’s pre-race expectations, said Horner.

“It’s always difficult when you look at pre-race plots and so on, it looked like by the last pit stop we could be somewhere around the podium. But to be fighting for the lead by lap 18 was beyond any of our predictions.

“Max was extremely confident going into the race. We chose to start on the soft tyre despite the temperature being a lot hotter and what we didn’t know was how that would affect the relative performance of the car because it was 10, 15 degrees at least hotter than yesterday and we know how sensitive these tyres are. So it’s always difficult to anticipate but the performance advantage we saw in qualifying carried through into the race.”