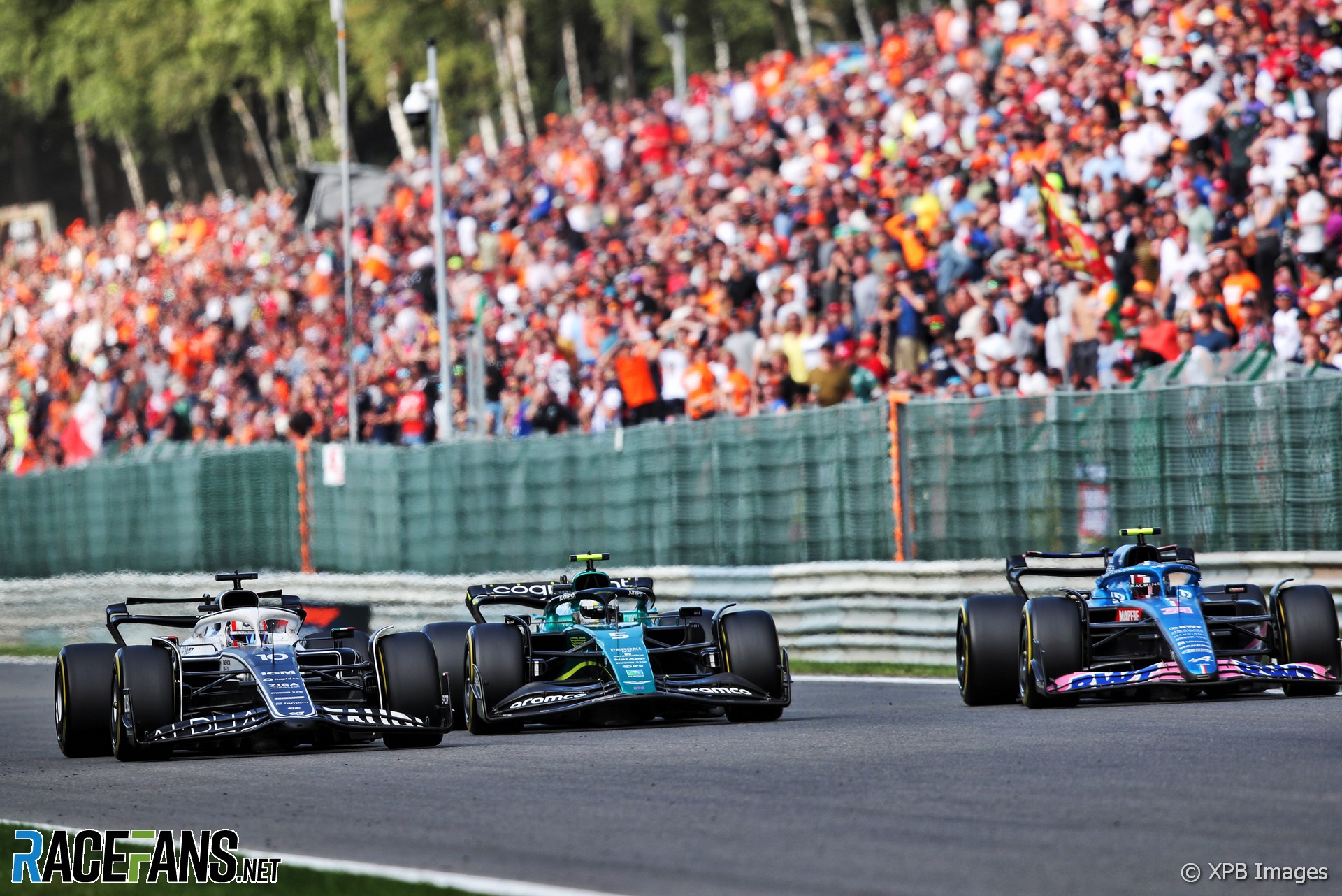 Esteban Ocon told Sebastian Vettel he made a tactical error when the pair caught Pierre Gasly in a dramatic moment during the Belgian Grand Prix.

The trio ran three-abreast approaching Les Combes as they fought over seventh place. Ocon emerged ahead, followed by Gasly, as Vettel was passed on either side.

The move unfolded after Vettel emerged from the pits behind Gasly on lap 34. He passed the AlphaTauri driver at the beginning of the next lap, and led his rival plus the chasing Ocon down to Eau Rouge.

When they emerged from Raidillon, Gasly and Ocon used DRS to pass Vettel. Ocon took both drivers in a single move, a feat he pulled off twice during the race.

“It was definitely good fun,” he said. “I’ve enjoyed the racing today, the car was extremely fast in a straight line, so I was managing the timing right about when to overtake.

“From where we started, I think 16th or 17th, we were expecting one point. We got six out of today, so definitely a good result for us.”

Ocon said he told Vettel afterwards he should have waited until later in the lap to pass Gasly, to avoid being caught by him

“I spoke to Seb and I was like, the [DRS] detection is there and he’s passing Pierre too early because he’s not going to get the DRS. I lifted the throttle a bit, got myself a little bit of a gap to be able to use the straight-line speed and then the surprise was, and the confirmation was, that Pierre had DRS.

“So I was able to go on the left side. Seb was very fair, honestly, he could have closed a bit on the left which he didn’t do, and I managed to get down on the outside of five.”

While Vettel was satisfied by his finish he admitted “it could have in a position more” after being passed by Ocon. “That was a bit of a shame with Esteban, he was a bit too lucky to pick me up there.”

He said he was “a bit stuck” when he was caught by the pair as they reached the Kemmel straight. “I didn’t have DRS and I was running out of energy.

“So I just watched in the mirrors and at some point just tried to keep it in the middle to not be distracting because I knew I’d get eaten up.

“It was a bit unfortunate. I just missed to get a run on Pierre coming out of the pits. I don’t know, with a better in-lap or better pit stop, that half a second we could have picked him up straight away and then it’s a different story. So that was a bit of a shame.”

Vettel admitted he “picked it [the DRS] up too early” after passing Gasly. “So that was not great on my side and obviously then I was dead meat.”