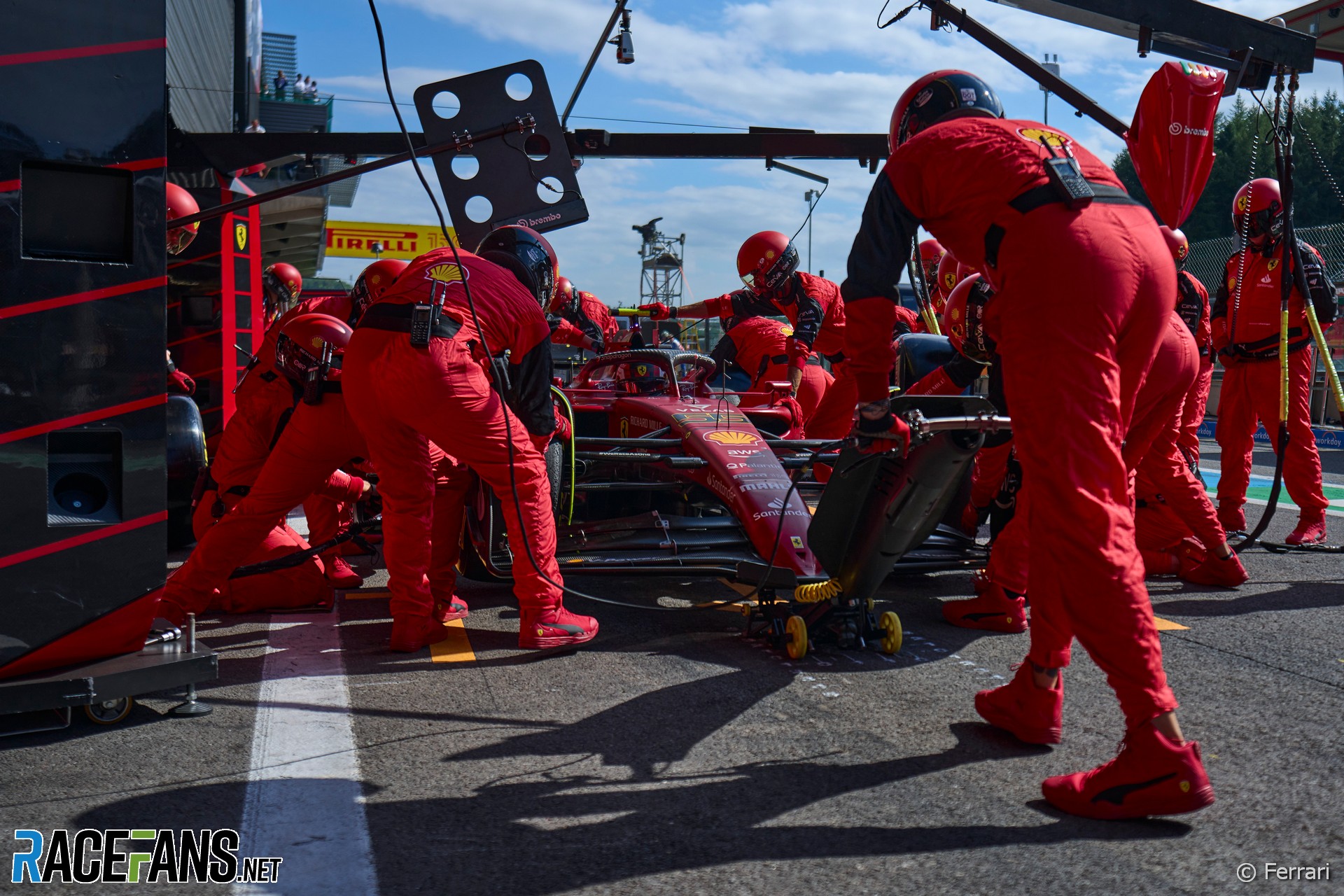 Charles Leclerc questioned the team’s decision to make a late pit stop during Sunday’s race at Spa-Francorchamps. The team intended to fit a fresh set of tyres in a bid to set the fastest lap of the race and take the bonus point that came with it.

Ferrari pressed aheda with the plan, but it backfired. Leclerc was passed by Fernando Alonso when he rejoined the circuit, and although he was able to repass the Alpine, he lost some time doing so at the beginning of his final lap.

Not only was Leclerc unable to beat Max Verstappen’s fastest lap time, he also collected a penalty for speeding in the pits, which dropped him behind Alonso. Ferrari’s attempt to gain an extra point therefore ended up costing them two.

Alonso said Leclerc’s late pit stop was the latest in a series of curious decisions by the team. “Ferrari has been doing strange things, so that was another strange thing,” he remarked after the race.

It was the latest in a series of tactical decisions by the team which have drawn criticism. Leclerc has lost positions as a result of the team’s calls on several occasions. These included in Monaco, when the team switched him onto intermediate tyres, at the British Grand Prix when Ferrari chose not to pit him during a late Safety Car period and in the Hungarian Grand Prix when the team fitted hard tyres which proved the wrong choice of compound.

However Binotto believes there is “no need” for Ferrari to reconsider its approach to strategy and insists decisions some regard as errors were not.

“Obviously there is always a need to improve and there are lessons learned on which we are looking and reflecting,” he said. “But if I look back at the season, I think there is a lot of perception from outside compared to what are the truth and the reality. I think sometimes we’re not doing these things that may have been perceived as mistakes.”

The decision to pit Leclerc at the end of Sunday’s race “was the right call”, Binotto stated.

“You need to be brave in F1. If there is an opportunity to try to get the fast lap and there was the margin on Fernando to stop on that and try to go for it, I think it was the right decision.

“We knew it would have been very close to Fernando. He was just ahead and lost the position. But we knew as well that he could have overtook him back because he’s got the fresher tyres and that would have helped in terms of DRS and top speed in the main straight. So once again, I think it was the right decisions.”

Leclerc narrowly failed to rejoin the track ahead of Alonso. His pit stop was not especially slow – six-tenths of a second off Ferrari’s best that day – but he ran slightly wide at the chicane on his way into the pits following the late decision to come in, which would have cost him some time.

Ferrari said Leclerc narrowly broke the pit lane speed limit because it lacked the wheel speed data from the front-right corner of his car as a sensor was damaged by overheating earlier in the race. This happened when the brake duct ingested a tear-off which Verstappen dropped on lap one. “That’s the type of risk you always have,” Binotto admitted.

Carlos Sainz Jnr started the race from pole position but finished a distant third, 26 seconds behind winner Verstappen. Binotto said that margin showed Ferrari didn’t have the pace to win even without the early Safety Car period which prevented Sainz from capitalising on the performance offered by the soft tyres he started on.

“Red Bull this weekend was certainly stronger and significantly stronger to win anyhow,” he said. “So I don’t think it has affected the final result.

“On top of that, I think Carlos was on soft tyres while the others were on medium, Checo and the one behind, and when you’ve got a Safety Car very soon in the race it may somehow as well help a slow introduction of soft tyres in terms of thermal management, et cetera.

“So I would say no, I don’t think that the Safety Car has affected the results. Red Bull has simply been much stronger this weekend.