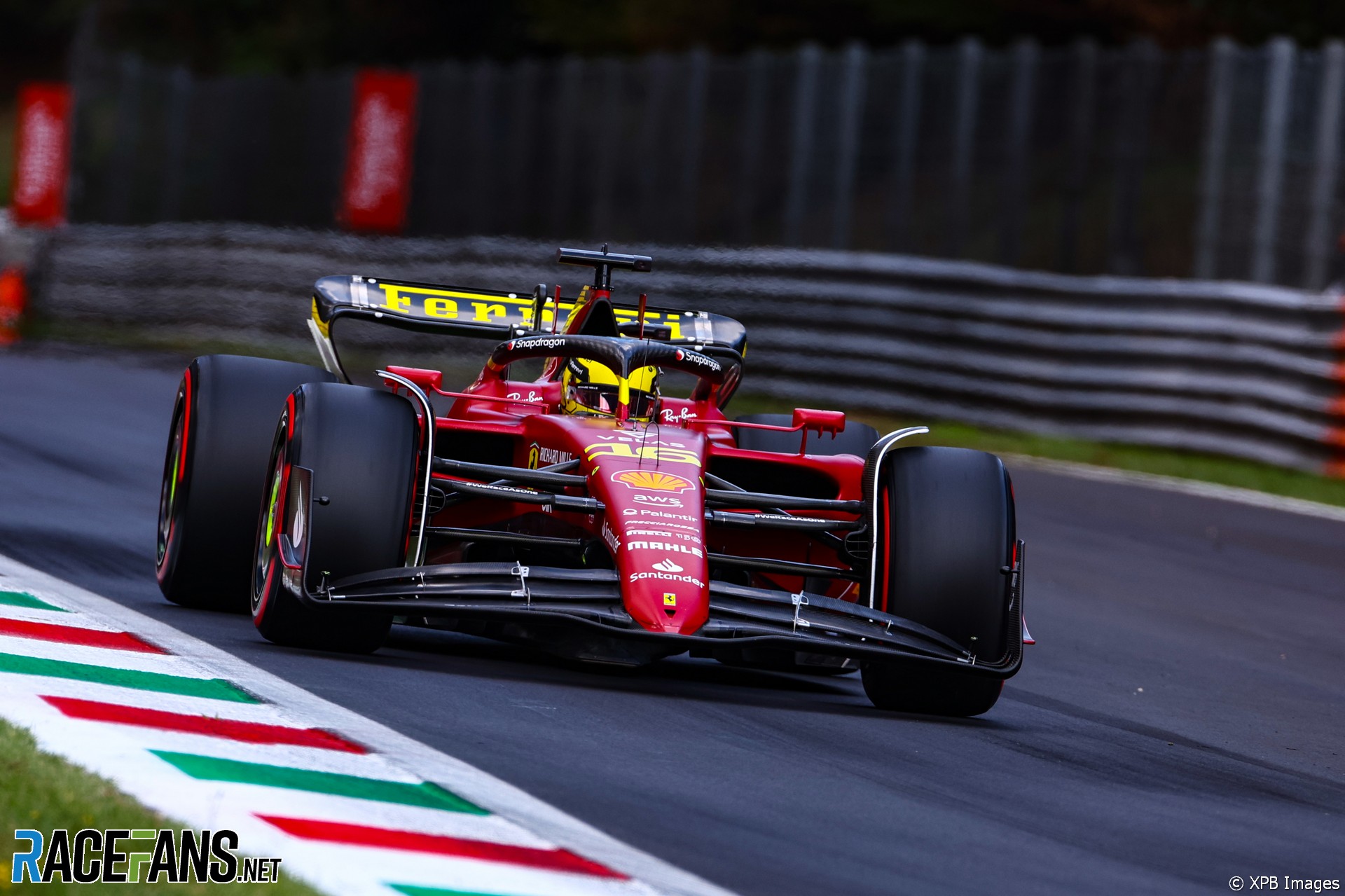 Charles Leclerc secured pole position for the Italian Grand Prix by beating Max Verstappen to the fastest time by a tenth-and-a-half in Monza.

Leclerc’s best time of a 1’20.161 was enough to see him end the session quickest ahead of the Red Bull driver, who will start from fourth on the grid after a penalty. George Russell will start second on the grid, with Lando Norris behind him in third.

Lance Stroll was the most eager driver to head out onto the circuit when the first phase of qualifying began. He set the first time of the hour with a 1’24.231. That was immediately beaten by Yuki Tsunoda, before the front running teams headed out for their first runs.

Sergio Perez went fastest of all on his first effort, before Max Verstappen went less than a tenth of a second faster to go quickest. However, the two Ferraris of Charles Leclerc and Carlos Sainz Jnr gave the Tifosi reason to cheer by beating the Red Bulls with their first lap times, Leclerc’s 1’21.280 setting a new benchmark, seven tenths faster than Verstappen, while Sainz moved into second.

George Russell jumped into third place in the Mercedes, half a second off the Ferraris, before Perez improved to take third. It was then Verstappen’s turn to improve and the championship leader broke into the 1’20s for the first time, comfortably putting himself on top of the times.

As the track fell quiet, the drop zone featured Kevin Magnussen, Valtteri Bottas, Lance Stroll, Mick Schumacher and Sebastian Vettel. The two Haas drivers took to the track and while Schumacher failed to improve, Magnussen appeared to move into safety before his lap time was deleted for exceeding track limits at the second Lesmo.

Bottas improved to move into safety, but Vettel could not go fast enough to do the same in the Aston Martin. Bottas knocked Nicholas Latifi into the drop zone in 16th, but the newcomer in the other Williams was impressing. In his first qualifying session, Nyck de Vries appeared to be safe in 14th, but lost his final lap for track limits at Ascari. However, he was still fast enough to squeeze through into Q2 in 15th, knocking his more experienced team mate out.

Joining Latifi out of Q1 were the two Aston Martins of Vettel and Stroll, along with the two Haas of Magnussen and Schumacher, after Magnussen had both of his final laps deleted for exceeding track limits at the second Lesmo.

No one was in a hurry to head out onto the high-speed Monza circuit as the green light came on at the end of the pit lane to signal the start of the second phase of qualifying. After several minutes without action, the field began to head out onto the circuit for their first times.

Once again, Perez was the first Red Bull driver over the line. He put in a 1’21.358, which again was eclipsed by Verstappen moments later by just under a tenth of a second. Sainz then raised cheers around the circuit when he pumped in a 1’20.878, the quickest time of the weekend so far.

Leclerc’s first attempt at a hot lap was aborted when he made a mistake under braking for the Rettifilo chicane and ran off over the escape road. After resetting his car, Leclerc put in a clean lap to second, just over three tenths behind his Ferrari team mate.

Once the Ferrari driver had returned to the pit lane, the track fell silent once more. The drivers at risk of elimination with four minutes remaining were Bottas, De Vries, Zhou Guanyu, Daniel Ricciardo and Yuki Tsunoda, who was the only driver yet to set a time in the second session. Lando Norris sat on the bubble in tenth, but held a two-tenth buffer in safety.

Eventually cars began streaming out of the pits for the final minutes. De Vries put in a strong first sector and was two tenths up on tenth place, but a mistake under braking for the Roggia chicane ruined his lap and guaranteed his elimination.

Both Alfa Romeos failed to improve to get out of the drop zone and were eliminated. Norris went faster and moved out of the bubble in seventh where he was then joined by team mate Ricciardo who jumped into safety in eighth. That meant Esteban Ocon fell into 11th place and the Alpine driver could not improve by enough to get through to Q3, ending his session.

Also out with Ocon were Bottas, De Vries, Zhou and Tsunoda, who did not set a lap time in Q2 as he was already guaranteed to start from the rear of the field.

For the third session, the top 10 drivers again took their time before heading out onto the circuit. When all ten cars eventually did take to the track, the two Mercedes of Hamilton and Russell hung back to sit at the rear of the queue, behind Verstappen’s Red Bull who was in line behind the two Ferraris of Leclerc and Sainz.

Perez’s first lap of a 1’21.359 saw him initially take provisional pole, before that was immediately beaten by Leclerc before Sainz took advantage of his team mate ahead to move to the top of the times with a 1’20.584. Verstappen’s first lap was not better than the Ferraris, moving into third place before admitting over team radio that his first sector had been poor.

Russell was fifth after his first run, six-tenths of a second ahead of Lando Norris’s McLaren, with Hamilton behind them both in seventh. For the final run, Russell opted to take used tyres, the only driver to do so.

For the final runs, Sainz did not offer his team mate a tow as the two Ferraris were split by Norris’s McLaren. Perez could not trouble the leaders with his final lap, meaning the battle for first in qualifying would be between the two Ferraris and Verstappen.

Sainz was the first over the line and improved his own provisional pole time by 0.155s, challenging his team mate to improve on itLeclerc promptly did so, beating Sainz’s time by a quarter of a second with a 1’20.161.

Only Verstappen was capable of beating the Ferrari driver to the fastest time, but he had to settle for second with his final lap, just under a tenth-and-a-half slower than Leclerc. That secured that Leclerc was on pole position with the fastest time in qualifying, ahead of Verstappen, Sainz and Perez.

However, the latter three drivers will all have penalties applied, meaning that George Russell will start on the front row alongside Leclerc after finishing qualifying in fifth. Lando Norris will start third on the grid after qualifying seventh, with McLaren team mate Ricciardo ending qualifying in eighth. Pierre Gasly ended qualifying ninth fastest, with Alonso in tenth with his one and only lap time deleted for exceeding track limits at the second Lesmo.