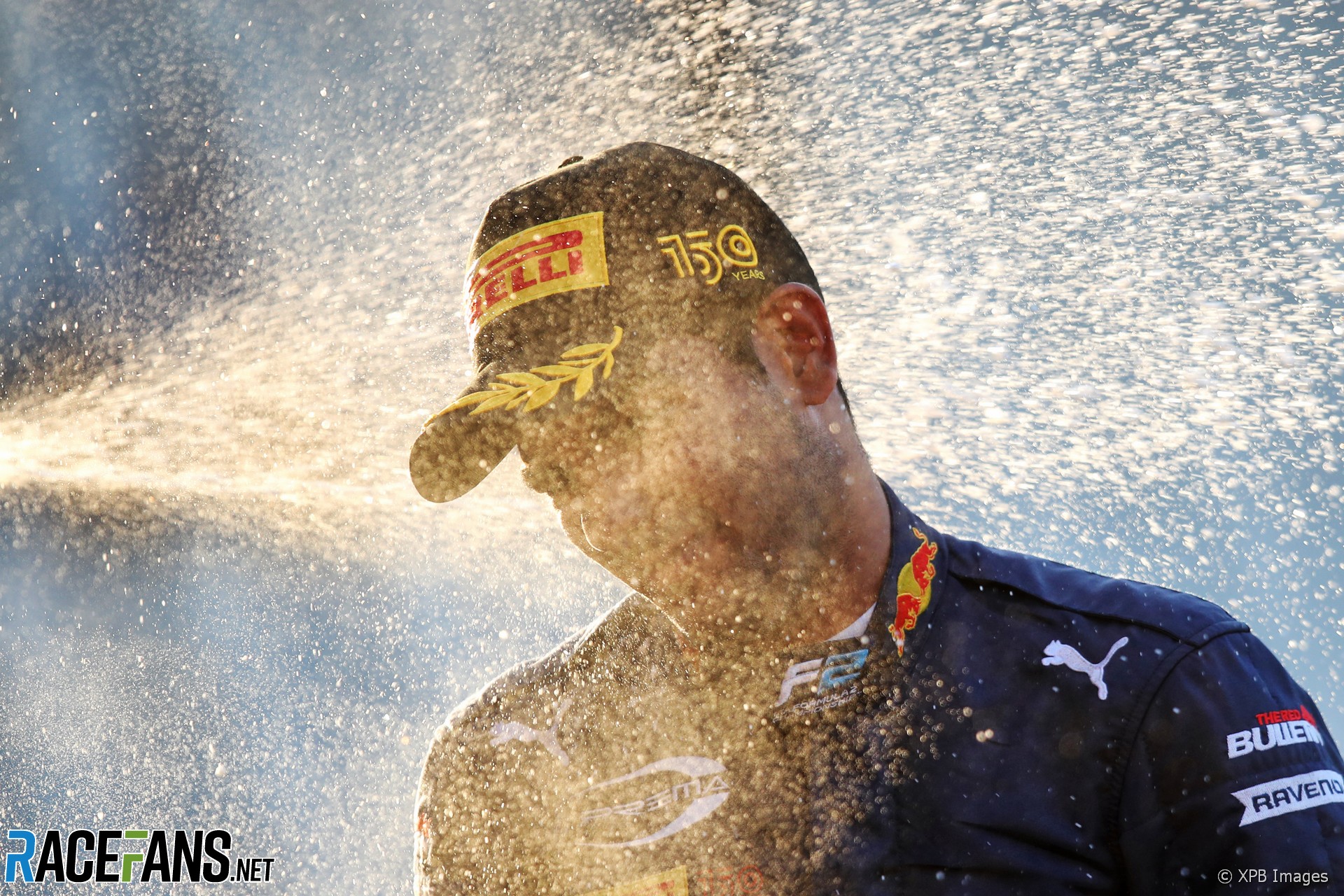 Jehan Daruvala held off Frederik Vesti for his first Formula 2 victory of 2022 in an attrition-heavy race that saw just 14 cars take the chequered flag.

Jack Doohan had taken pole but was quickly swallowed up by second-placed Liam Lawson and Marcus Armstrong off the line as Doohan’s steering wheel apparently failed, leading to him unable to release the clutch as desired.

Newly crowned champion Felipe Drugovich took second from Armstrong through the Roggia chicane as Doohan’s race went from bad to worse. He attempted to make amends for his poor start into the second chicane, hitting Daruvala’s rear wheel and going off-track, out of control and also hitting Logan Sargeant, both forced to retire.

Behind, Théo Pourchaire, after losing the 2022 title to Drugovich yesterday, found himself in a Campos sandwich that saw his car pitched into the wall on the run to Curva Grande. He, Olli Caldwell, Ralph Boschung and Luca Ghiotto all retired as a consequence of the incident.

The Safety Car was deployed to clear the crashed cars. Behind the Safety Car, Dennis Hauger was given a drive through penalty for the wheels not being fitted to his car at the three minute signal.

The race restarted on lap sic with Armstrong passing Drugovich for second but Lawson holding the lead. However, the race was swiftly neutralised a second time on lap seven when Calan Williams crashed into barriers at the outside of Ascari, damaging the tyre wall.

Armstrong pitted immediately but leader Lawson was unable to react quick enough to pit. However, replays showed that Armstrong was only able to enter the pit lane by crossing after the bollard, almost guaranteeing himself a five-second penalty, followed by being noted for also speeding in the pit lane. Lawson, Drugovich and Jüri Vips pitting in a more orderly fashion on the following lap.

A red flag was eventually called on lap nine and a rolling restart was led by Richard Verschoor, who was yet to make his compulsory stop. Armstrong, despite a 10-second stop-go penalty, was aggressive at the restart, overtaking Jehan Daruvala for third, although Daruvala reclaimed the place before Armstrong pitted to serve his penalty.

Vips attempted to overtake Lawson into Roggia but couldn’t slow down enough, tagging the former race leader and spinning him around. Lawson was then shown a black-and-orange flag on lap 15 for front wing damage. Vips was found at fault for the contact and given a ten-second stop-go penalty.

Daruvala and Vesti were both able to pass Sato for second and third, with leader Verschoor now the only front runner not having made his mandatory stop. Verschoor eventually pitted on lap 25, giving Daruvala the lead with five laps to go.

After 30 frantic laps, Daruvala crossed the line first with Vesti almost two seconds behind him and Ayumu Iwasa claiming the final podium place. Daruvala’s win and Doohan’s retirement puts them on equal points in fifth and sixth in the championship, Iwasa claiming fourth and just six points behind third place Sargeant.