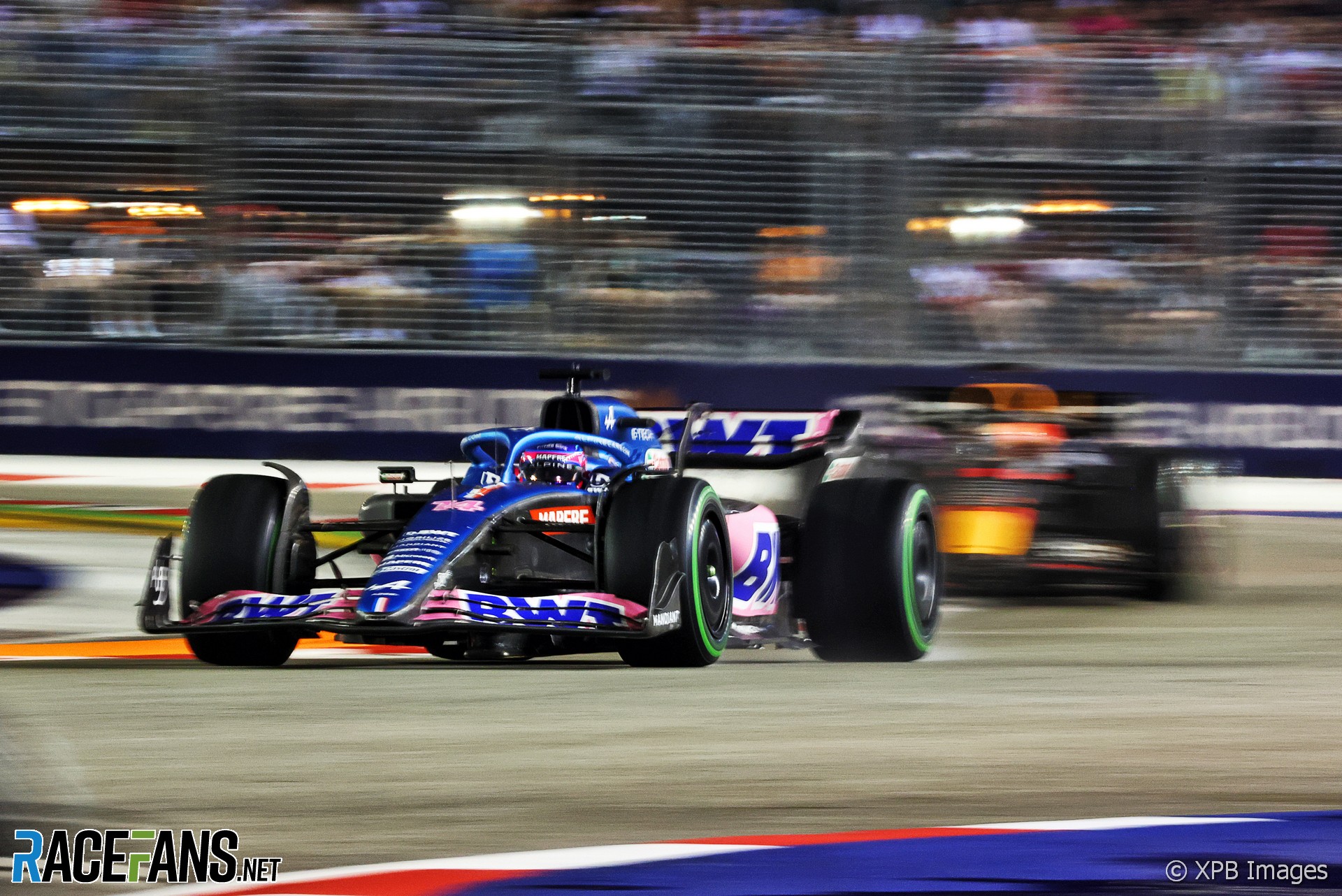 In the round-up: Alpine believe a similar problem with their Renault power units put both its drivers out if yesterday’s Singapore Grand Prix.

Alpine team principal Szafnauer suspects the same problem took both drivers out. “Unfortunately we had a double retirement which is a pity as we’ve been very competitive all weekend,” he said.

“It looks like we suffered a similar power unit issue on both cars, which we will investigate in detail. It’s important that we identify the root cause of what happened and put preventative measures in place to avoid a repeat.”

The Singapore Grand Prix went “from bad to worse” for Mercedes, says the team’s head of trackside operations Andrew Shovlin. While Lewis Hamilton started third but fell to ninth after crashing, George Russell was unable to fight his way into the points after starting from the pit lane.

Shovlin said Hamilton’s off-track moment on the first lap compromised his tyre performance. “Lewis dropped a bit of ground to Sainz on the start and then got pushed wide and he lost all tyre temp going through the water,” he explained. “That meant the opening laps were tricky.”

Hamilton had to pit with front wing damage after his crash. Shovlin said the timing of that pit stop “was unfortunate as we lost time with the change but then lost further positions as the Safety Car allowed others to pit without losing much time.”

The team believe Russell was on course to reach the top 10 until he tangled with Mick Schumacher. “It looked like we would have at least got back into the points as he was pulling the cars ahead by many seconds a lap,” said Shovlin.

“Unfortunately, that hope was short-lived when he had contact with Mick that caused a puncture. Overall, a race to forget, we’re going to use the next few days to regroup and prepare for Suzuka where hopefully we will put in a better all-round performance.”

After missing out on a points finish in Singapore, Valtteri Bottas said his team did the right thing by risking a change to soft tyres at the end of the race when their rivals opted for mediums.

“Towards the end, definitely it started to drop [off],” he said. “But I think it was good to try in case it gave an advantage in the warm-up or something.

“But it didn’t seem to make a huge difference and it definitely dropped towards the end. I think at that point we needed something to happen to get some points, so at least we tried.”

'Despite Rosenqvist’s future only being resolved after Palou was confirmed to be staying with Ganassi for 2023, Palou’s 2024 switch does not necessarily mean that one of the team’s current drivers will be replaced after next season either, with the potential that McLaren will expand to a four-car outfit for 2024 if engine supply allows.'

Formula 1's budget cap row: Wolff may reverse his decision not to travel to Japan (The Telegraph)

'At the moment Wolff is still planning on staying at home but it is understood that could change depending on Wednesday's developments.'

'Due to the four-car limit on teams, three cars each are entered to score points for ‘Campos’ and ‘Campos Racing’ in the teams’ championship. The fleet of vehicles have all been removed from the race one and two results due to illegal parts modification.'

"Formula Foundation-E now gives this growing and highly influential category of drivers and future drivers an opportunity to become involved in competitive motorsport without compromising their motoring or lifestyle choices."

Crawford's Guest Column: Lessons learned after up and down 2022 season (Formula 3)

'Following an extensive application campaign, 24 women representing six regions of the world were selected from 300 applicants to gain their first experience of volunteering outside their country and at a world championship.'

The perfect example of why social media is awful:

An anonymous account using material ripped off from somewhere else getting huge attention by mocking a volunteer doing real work, succeeding only in betraying their own ignorance of the job.https://t.co/uR6yN8ljsQ#F1

Instead of complaining about the FIA brandishing the black-and-orange flag, Haas team principal Guenther Steiner should have a word with Kevin Magnussen about his first-lap incidents, says @Sjaakfoo:

You can debate whether it’s needed to hand out flags for wing damage, but I think the bigger issue here is that Steiner needs to sit his driver down and ask him to stop damaging his front wings all the time so the flags won’t be an issue regardless.
@Sjaakfoo