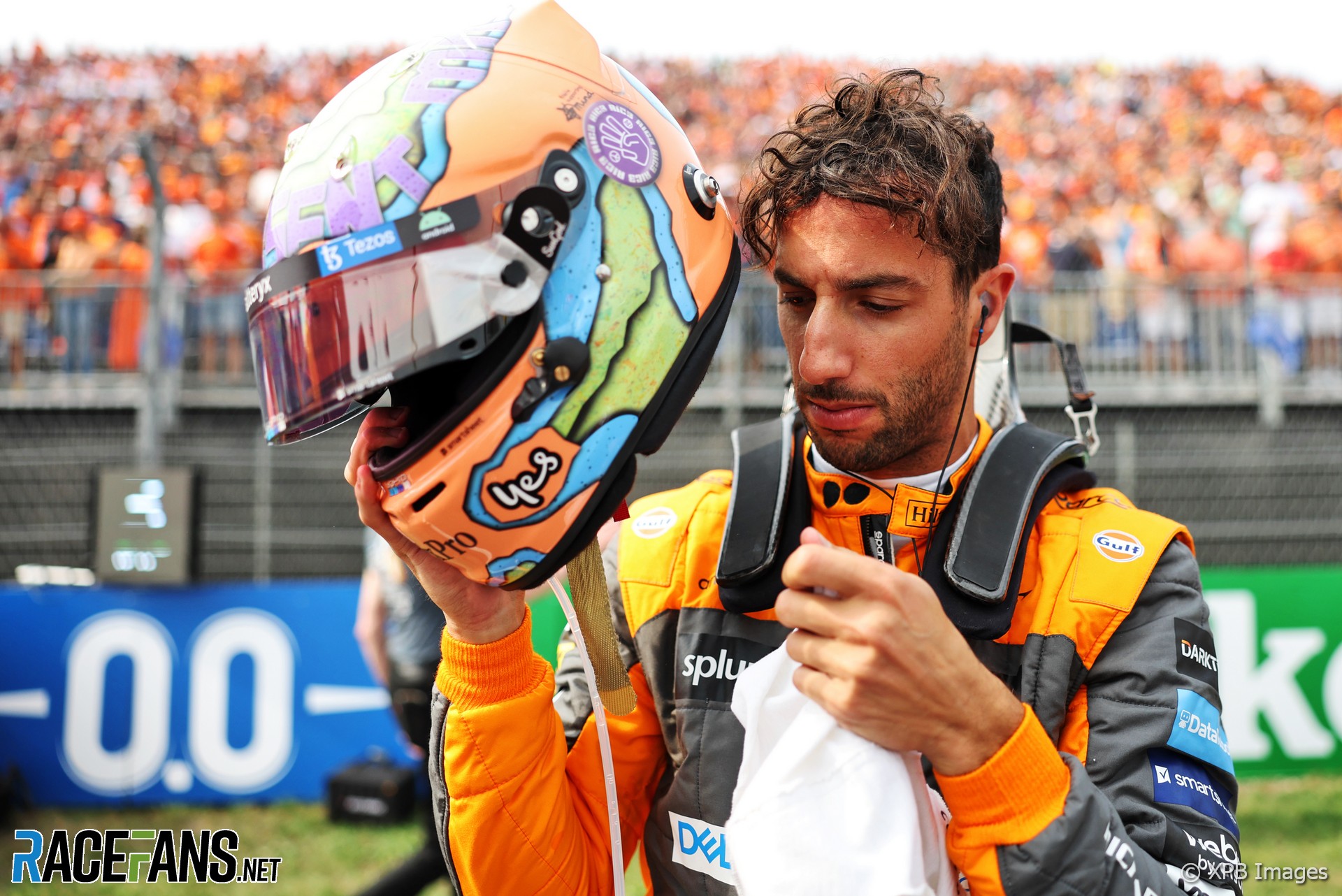 Two years ago Daniel Ricciardo’s stock was sitting at its highest level since he had departed Red Bull at the end of the 2018 season.

Fresh from securing his first podium with Renault at the Nurburgring, Ricciardo lay an unexpectedly strong fourth in the drivers’ championship. Only the two Mercedes drivers, Lewis Hamilton and Valtteri Bottas, plus his former Red Bull team mate Max Verstappen lay ahead of him in the standings.

Having already locked down Ricciardo to a three year contract months prior, McLaren’s Zak Brown and Andreas Seidl would likely have felt thrilled about the future for the team. With Lando Norris showing promising signs of development in his second season, the arrival of an experienced, race-winning veteran like Ricciardo to replace the departing Carlos Sainz Jnr felt in many ways like the best possible solution. And when McLaren ended the season in third place, it appeared the best was yet to come for the Woking team.

Fast-forward to October 2022 and now Ricciardo looks almost certain to be off the grid next season, despite being in no way ready for his Formula 1 career to come to an end.

In just over a year and a half with Ricciardo in their team, McLaren have felt one of the strongest examples of buyer’s remorse any F1 team has ever experienced. Despite the best efforts of both team and driver, and a mutual desire for the partnership to work, consistently underwhelming performances left McLaren with no choice but to cut their losses – and Ricciardo’s contract, which they are terminating a year early. But while McLaren have replacement Oscar Piastri lined up, Ricciardo is currently without a seat for 2023.

The only two teams left to confirm their driver line-ups for next season are Haas and Williams – both teams sitting at wrong end of the constructors’ championship table in joint-eighth and 10th places, respectively. While the doors to a place on the grid next season haven’t fully shut to Ricciardo, he clearly has little appetite to sign with either the two teams who are among the smallest on the grid.

“If he’s interested in us, he’s not shy to call me up. I am not going to chase him down,” Haas team principal Guenther Steiner told the Associated Press yesterday.

By his own admission, Ricciardo is setting his sights not on next year, but on 2024. “I think the reality is now I won’t be on the grid in 2023,” he admitted at Suzuka. “It’s now just trying to set up for 2024. I think there could be some better opportunities then.”

The prospect of taking a year out and returning to full time racing in Formula 1 the following season seems like a major gamble on Ricciardo’s part. After all, there are countless drivers in recent years who lost their places on the Formula 1 grid and simply never found a route back on it.

Stoffel Vandoorne, Brendon Hartley, Sergey Sirtokin, Jolyon Palmer, Pascal Wehrlein, Felipe Nasr – just some of the names in a long list of drivers whose Formula 1 careers ended earlier than they intended. But that does not mean that a year out of Formula 1 is a death sentence for a driver’s career – far from it.

Over the last 20 years, a total of 21 drivers have taken at least a full season out of Formula 1 after running at least two races the year before and returned to the grid to race multiple rounds the following season. The 2022 season has seen two such cases – Alexander Albon and Kevin Magnussen both rejoined the field this year after the pair of them did not compete a single race in 2021.

So it would certainly not be unusual to see Ricciardo find a way back onto the grid in 2024 if he does sit out the next year of grand prix racing. But where are the likely landing spots the eight-time grand prix winner might consider worthy of his talents?

If Ricciardo is holding out in hope of a competitive seat for 2024, it’s hard to see a way that he will not end up disappointed. Ferrari are committed to their two drivers both much younger than Ricciardo. A return to Red Bull is also unlikely, with Sergio Perez holding a contract for 2024 and adequately fulfilling the supporting role to Verstappen.

At Mercedes, Hamilton will have freedom to continue with the team as long as he wants to, while George Russell knows his future at the team is entirely within his own hands. Despite Hamilton having mulled the idea of retiring before he races deep into his forties, the seven-time champion has also admitted Mercedes’ struggles this season have reignited his motivation – seemingly reducing the chances of Hamilton freeing up his seat at Mercedes any time soon.

Having raced with Renault for two season before their evolution into Alpine, Enstone seems the most obvious place for Ricciardo to try and re-establish his F1 career once more. However, doing so would require a major swallowing of pride, given he spurned the team back in 2020 in order to join McLaren – the team they happen to be battling over fourth place in the constructors’ championship with. But that avenue also appears to have closed anyway with the team’s signing of Pierre Gasly.

With Gasly joining their team, Alpine now have two 26-year-old, marketable, race-winning French drivers in their cars with over 200 grands prix of experience between them. Unless Ocon and Gasly suffer an irreparable breakdown in their relationship – and the pair do have a history – it’s difficult to see how Ricciardo will seem like a better option to his old team.

Alfa Romeo have followed a pattern in recent seasons of hiring a veteran driver with plenty of experience racing at the front of the field and pairing them with a promising rookie. As the Sauber team transition out of Alfa Romeo and into a new phase – almost certainly Audi – could Ricciardo be an attractive prospect for 2024?

As ever, Formula 1 is political. Zhou Guanyu has proven to be a more than competent rookie in 2022 and earned a second season with Alfa Romeo next year. But aside from his abilities as a driver, Zhou’s status as the first Chinese driver to race in Formula 1 gives him unique commercial appeal that no other driver on the grid enjoys – with China being a major market of interest to Audi. While Ricciardo continues to be one of the most recognisable and popular characters on the F1 grid, that may not be enough to help him earn a seat with Sauber, especially after a year away.

Had Sebastian Vettel not decided to retire, Aston Martin may have seemed a strong contender for Ricciardo for 2024. However, the team’s surprise signing of Fernando Alonso on a ‘multi-year’ deal beginning next season likely means that the Silverstone team will not be an option.

With Lance Stroll enjoying the privilege of staying with the team for as long as his wishes, Alonso’s seat would be the only realistic opportunity. But even if 2023 proves just as challenging for Aston Martin as 2022 has at times, it’s unlikely Alonso will choose to throw in the towel and depart after one year. His commitment to the team reflects his belief in their long-term growth. So there is little chance that Alonso will give up his pursuit of a championship with Aston Martin before they truly begin reaping the benefits of the heavy investment made into the team.

Naturally, a return to AlphaTauri would make no sense for either Ricciardo, AlphaTauri or the Red Bull junior driver programme, which leaves only Haas and Williams – the only two options still left for 2023. Unless a dramatic shift in performance occurs for either team next season, it’s difficult to see how Haas or Williams will be any more appealing to Ricciardo this time next year than they are right now.

It’s difficult to fathom that these final four rounds of the 2022 season may also be the last four races in the F1 career of one of the most successful and popular drivers of his generation. But unless something dramatic unexpectedly happens over the next 12 months – which can never be ruled out in Formula 1 – it’s hard to see how an opportunity will open up that will entice Daniel Ricciardo back onto the grid in 2024.