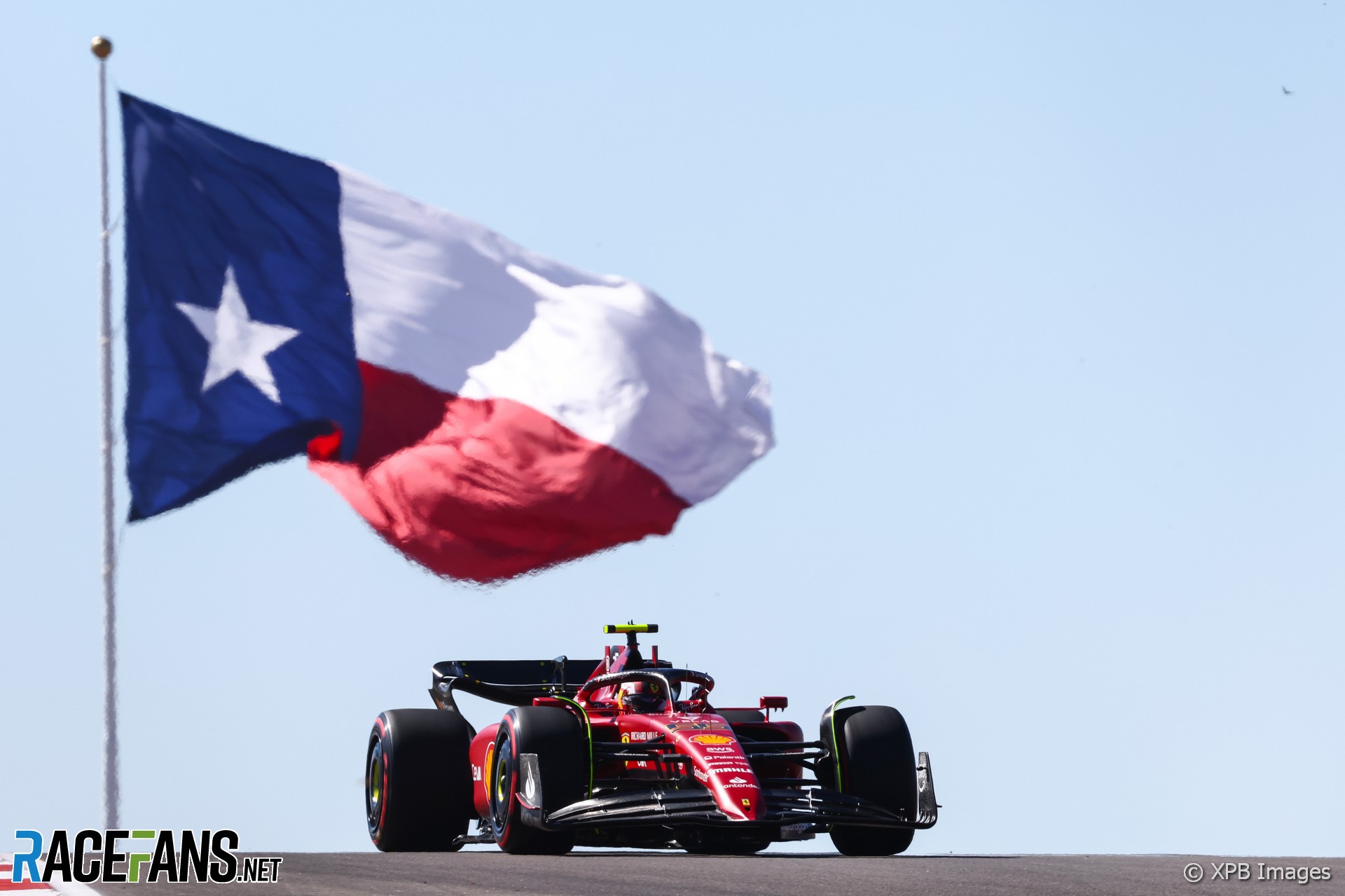 Carlos Sainz Jnr set the quickest time in opening practice for the United States Grand Prix in Austin in a session which was disrupted when Antonio Giovinazzi crashed.

In a warm and sunny start to the weekend at the Circuit of the Americas, Sainz’s best lap of a 1’36.857 put the Ferrari driver fastest, a quarter of a second ahead of world champion Max Verstappen. Lewis Hamilton was third-fastest for Mercedes, almost half a second slower than Sainz.

The opening practice session of the weekend saw five drivers step in for first practice run outs. American Formula 2 driver Logan Sargeant took over Nicholas Latifi’s seat in the Williams, while his F2 rival Theo Pourchaire was given the chance to drive Valtteri Bottas’s Alfa Romeo. Charles Leclerc sat out the session to allow Robert Shwartzman to drive his Ferrari, while 2021 IndyCar champion Alex Palou was handed Daniel Ricciardo’s McLaren for the first hour of the weekend.

Former Alfa Romeo racer Giovinazzi was the fifth and final practice driver in the session, but disaster stuck on only his fourth lap of the hour when he lost control at turn six and spun into the barriers. Kevin Magnussen could only look on as Giovinazzi left his car with a damaged front wing and sidepod. The session was red-flagged but while Giovinazzi recovered back onto the track and to the pit lane, clutch damage on his Haas prevented him from continuing.

When the session restarted, Verstappen quickly jumped to the top of the times with a 1’38.272 on softs tyres, half a second ahead of the Alpines of Esteban Ocon and Fernando Alonso on mediums. Verstappen then improved to a 1’37.462, with team mate Sergio Perez moving into second place, eight tenths slower than his team mate.

As the session went on, times continued to improve on the warm, rapidly evolving Circuit of the Americas. Lance Stroll briefly moved to the top of the times with a 1’37.460, but that was beaten by the Mercedes of Lewis Hamilton by a tenth of a second. Then, Ferrari driver Carlos Sainz Jnr lowered a new fastest lap of the session, just under half a second quicker than Hamilton on the soft tyres.

In the final 10 minutes of the session, all 19 cars still remaining headed out onto the busy track. Verstappen improved on the softs to move into second position, while Sebastian Vettel almost spun his Aston Martin with an oversteer moment as he headed through the left-hand kink of turn seven. Shwartzman had been on course for his personal best lap at the end of the session before coming across Verstappen’s Red Bull at the Andretti corner at the end of the lap, the Ferrari driver having to back out.

There were no further improvements at the top of the times in the final minutes, meaning Sainz ended the session quickest by the time the chequered flag was flown. Verstappen ended the session second, with Hamilton third ahead of Stroll, Perez and Alonso.

George Russell was seventh in the second Mercedes, with Pierre Gasly, Lando Norris and Vettel completing the top ten. Despite losing what was likely to be a faster time at the end of the session, Shwartzman was the fastest of the rookie first practice drivers in 16th, directly ahead of Palou, Pourchaire and Sargeant in 19th.