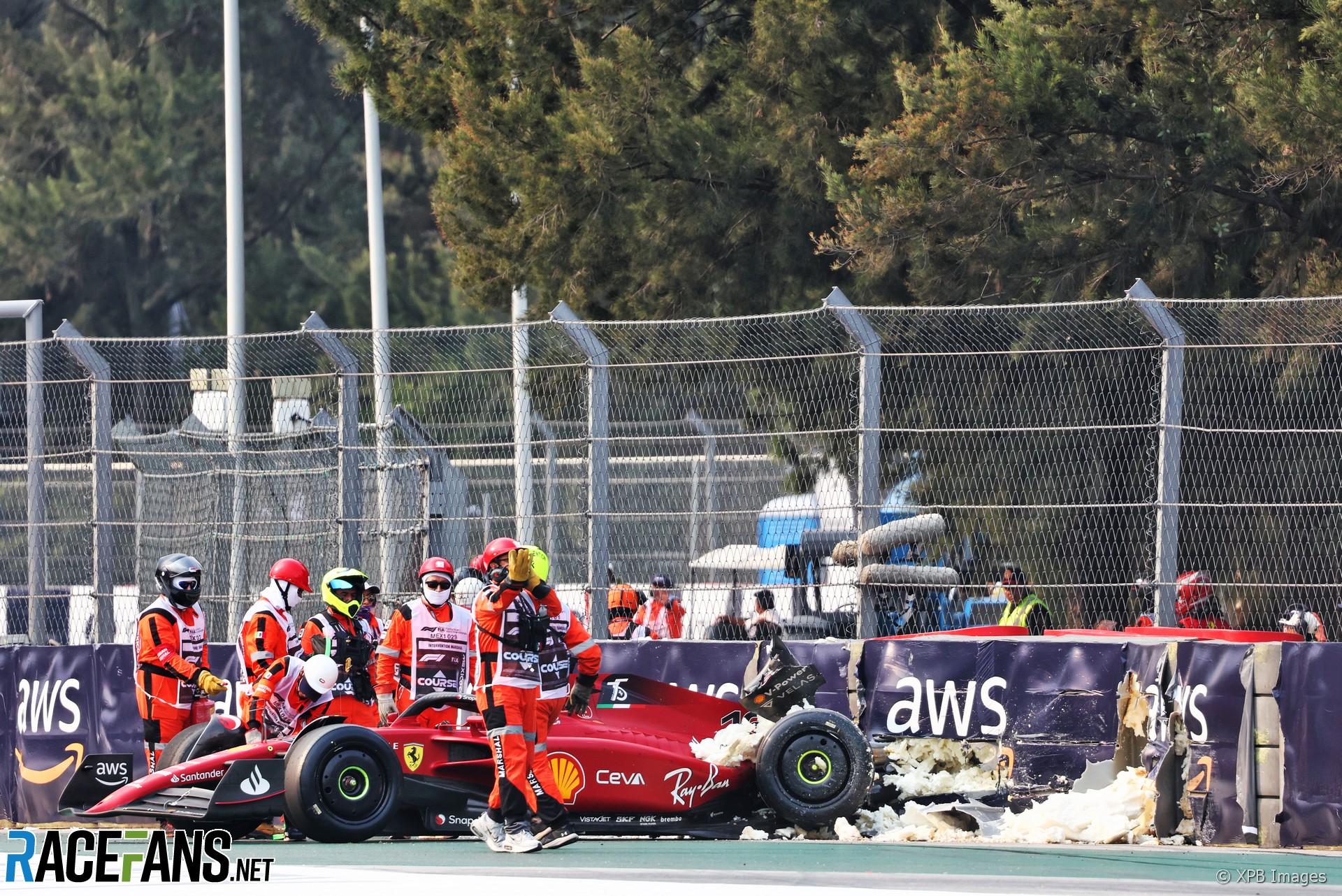 Charles Leclerc crashed out of second practice for the Mexican Grand Prix as George Russell went quickest in a session dedicated to tyre testing.

The Ferrari driver lost control at turn seven and crashed backwards into the barriers, causing heavy damage to the rear of his car. Russell was fastest at the end of the session, but times were largely irrelevant as the majority of running was dedicated to gaining data on Pirelli’s prototype 2023 tyre compounds.

As with the previous round atr Circuit of the Americas last weekend, the second session of the day was extended by half an hour and dedicated to testing the softest prototype compounds designed by Pirelli for the 2023 season. Only the five drivers that missed the opening session were permitted to run their dry tyre allocation for the weekend. Russell used the soft tyres to set the early benchmark time of a 1’19.970 – quicker than Carlos Sainz Jnr’s best time of the earlier session – as Tsunoda and Ocon went second and third fastest, also on the softs.

After Pietro Fittipaldi being forced to stop Magnussen’s Haas on track with a suspected turbo problem in first practice, Magnussen was initially unable to take to the track as his mechanics continued to work on his car. He was eventually sent out onto the track with almost half an hour already expired on the prototype tyres, meaning he would not run any of his weekend’s tyre allocation in the session.

As drivers carried out the runs assigned to them by Pirelli, some struggled for rear grip around the circuit. Sainz and Max Verstappen both made mistakes, while Yuki Tsunoda also had an oversteer moment entering the stadium section which saw him miss turn 14 entirely.

By far the biggest moment came for Ferrari’s Leclerc, who lost control of the rear of his car entering turn seven and spun, hitting the barriers backwards and destroying the rear of the car. The session was red-flagged and Leclerc safely climbed out of his car unharmed, but there was a 20-minute delay until practice resumed.

When it did, the 45-minute cut-off point for drivers who had missed the opening practice session had elapsed, meaning that for the remainder of the session, all drivers were obliged to run prototype Pirellis with DRS disabled. As a result, there were no further improvements in the times for the rest of the session.

In the final three minutes, Zhou Guanyu was told to pull his car off the circuit following a loss of hydraulic pressure in his Alfa Romeo. Zhou stopped off track in the stadium section, causing the red flags to come out for a second time and signalling the end of the session.

That left Russell on top of the times ahead of Tsunoda and Ocon, all three having set their best laps on softs earlier in the session. Lewis Hamilton was fourth and the quickest of the drivers who had been limited to the prototype tyres, ahead of the two Red Bulls of Sergio Perez and Max Verstappen, with the Ferraris of Leclerc and Sainz behind them.